A decade of semitruck accident data

The Fang Law Firm, P.C. analyzed 2011-2020 data from the National Highway Traffic Safety Administration to illustrate where, when, and how many Americans are killed in semitruck crashes. 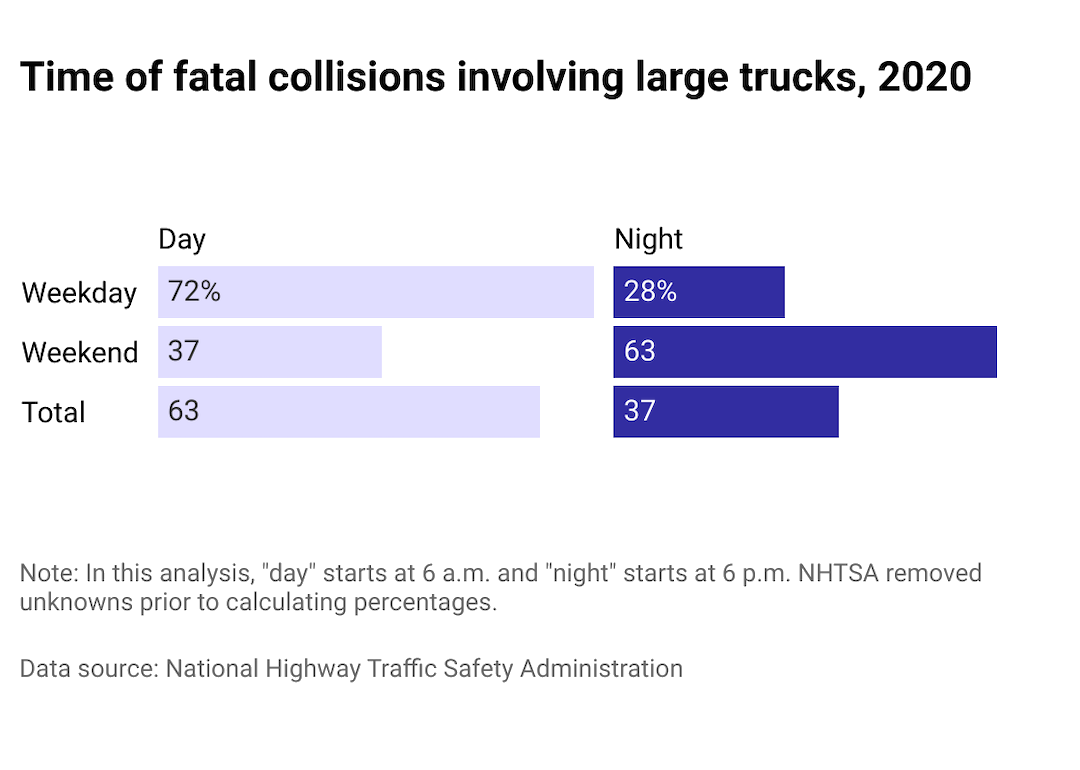 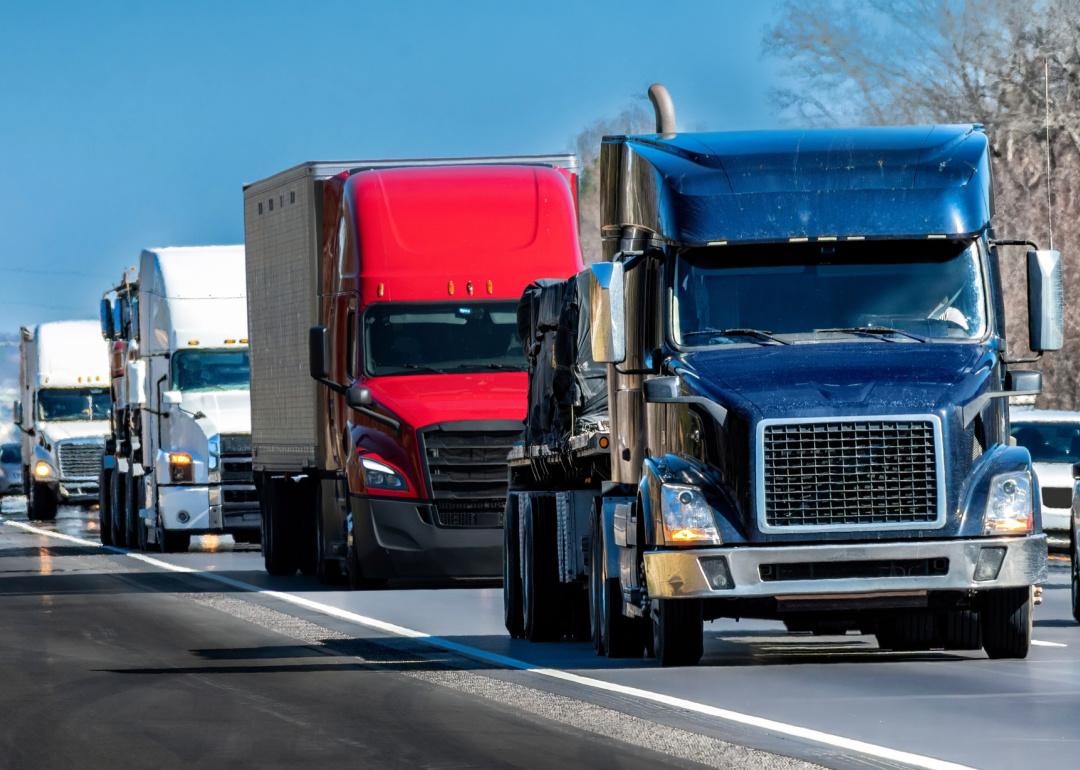 Midwestern roadways are at the epicenter of a 26,000-pound public health hazard that's grown over the last decade. Semitrucks have been involved in an increasing number of fatal injuries on U.S. roadways since 2011, according to the National Highway Traffic Safety Administration. A column of states spanning from Texas to North Dakota, as well as Wyoming and Idaho, see the most of these types of wrecks.

Nearly three out of every four large trucks involved in fatal crashes in 2020 weighed more than 13 tons—the aforementioned 26,000 pounds. Semis—heavy commercial trucks also referred to as 18-wheelers when hauling a trailer—are an important form of freight transit for goods across the U.S. In 2020 alone, the vast majority of all freight by tonnage in the country—more than 72%, or 10.23 billion tons to be precise—was transported by truck across U.S. highways. The drivers behind the wheels of these massive machines can earn a lucrative income with little training or education, but they also face pressure to deliver goods as fast as possible in an industry that's been coming to terms with its own inefficiencies in recent years.

About 9% of all fatal crashes in the country in 2020 involved a large truck, according to NHTSA data. This comes after a decade in which shipping firms struggled to get enough trucks on the road to meet demand. Today, the U.S. has a greater need for truck drivers than ever. It's a dilemma that Google- and Amazon-backed startups are attempting to solve with driverless vehicles that can operate autonomously, either individually or in convoy, eliminating the need for a human driver.

For now, booming demand for goods and an insatiable appetite for rapid gratification coupled with declining wages and a retiring workforce are exacerbating an existing labor shortage. The American Trucking Association estimates the trucking industry, and by extension, the broader U.S. economy will need 160,000 additional drivers by 2030. And that shortage of drivers is now contributing to emergency conditions that have pushed the U.S. to waive some safety measures for drivers.

The Federal Motor Carrier Safety Administration has extended an emergency declaration intended to keep essential goods like PPE, food, and fuel flowing throughout the country five times since the start of the COVID-19 pandemic. The declaration also tweaked some safety requirements in favor of wringing the most out of America's existing trucking labor force, including giving truck drivers the green light to drive longer than 11 hours in a single day.

In order to take a more focused look at the depth and breadth of the impact semitruck accidents have on both the national infrastructure and the traveling public, The Fang Law Firm, P.C. analyzed 2011-2020 data from the National Highway Traffic Safety Administration, released in April 2022, on crashes involving large trucks. For the analysis, a large truck is defined as any truck exceeding 10,000 pounds (5 tons) at its heaviest safe weight, excluding buses and motor homes.

Truck-involved fatalities have risen, and fatalities are most often occupants of the other vehicle 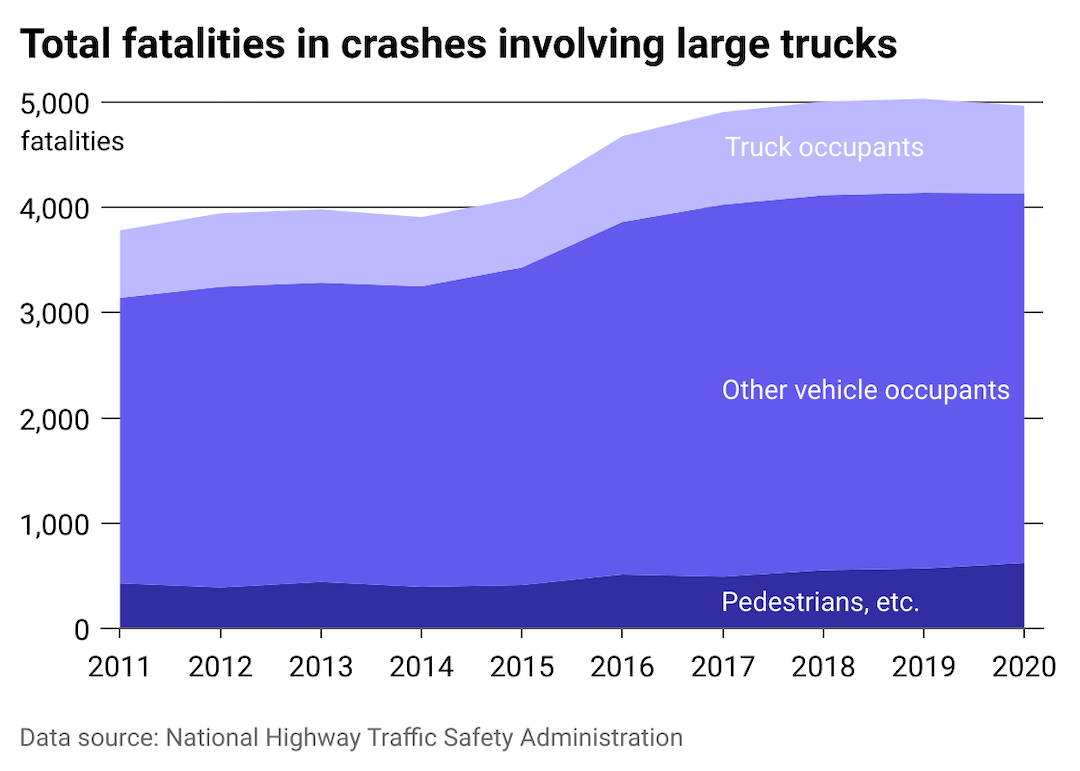 When a large commercial truck collides with another vehicle, it's the occupants in the passenger vehicle that are more likely to suffer a deadly injury. Between 2011 and 2020, more than 44,000 Americans died as a result of these collisions, and 1.26 million people suffered injuries. Each year, occupants of vehicles involved in collisions with large trucks make up more than 70% of the fatalities. Pedestrians and other bystanders made up roughly 10% of fatalities.

One contributing factor to the imbalance in deaths in such collisions—aside from the obvious difference in size and weight of the vehicles involved—is a marked difference in necessary stopping distance. The Utah Department of Transportation calculated that the average stopping distance for a passenger vehicle traveling 65 mph is 316 feet. For a fully loaded commercial truck, that stopping distance jumps to 525 feet—nearly the length of two football fields—meaning the truck is impacting at a much greater speed and velocity than the passenger vehicle. 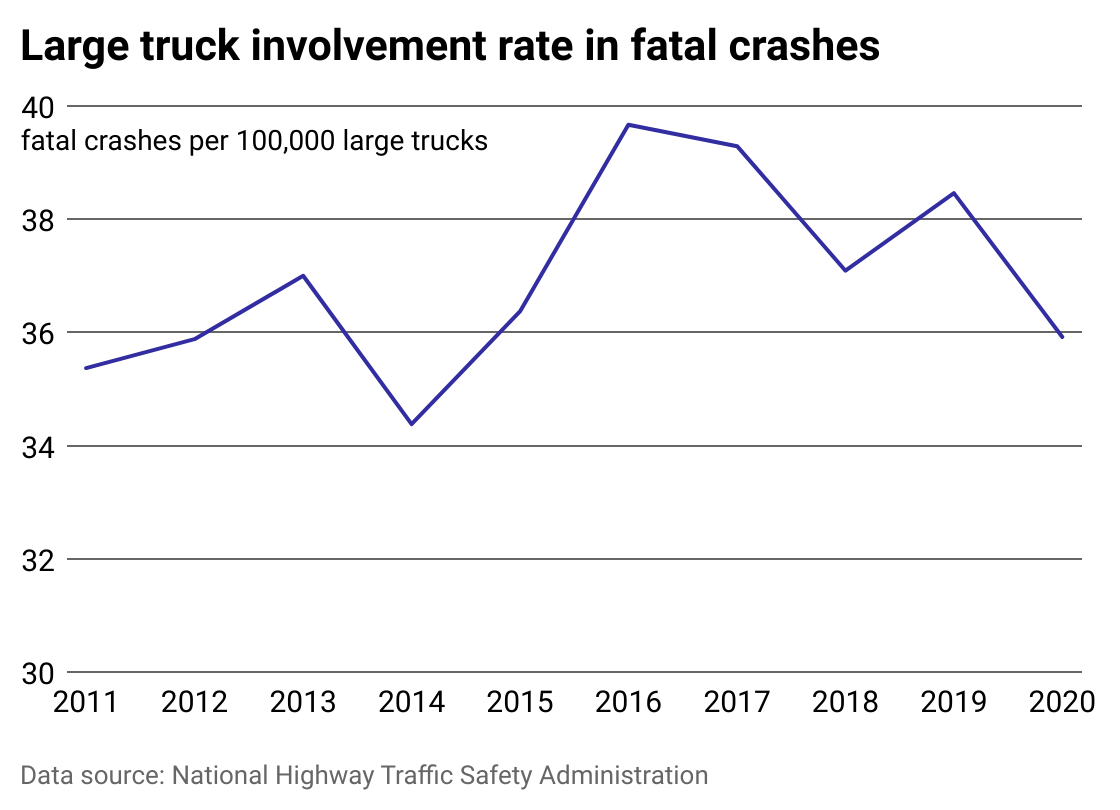 While deaths from auto collisions have increased overall, the rate at which large trucks have been involved in fatal crashes has increased only slightly in frequency since 2011.

By 2013 the trucking industry was seeing evidence of its labor shortage. Drivers were retiring from the sector, and the average annual pay for truck drivers was lower than it had been a decade prior when adjusted for inflation. Even though the economy was trending upward from the 2008 recession, trucking firms couldn't find enough drivers willing to work for the wages offered.

Over the decade, accidents involving trucks that resulted in deaths peaked in 2016 and 2017 around the same time U.S. oil and gas production boomed, straining roadways near areas where it was obtained, processed, and transported—as evidenced by the traffic accident spike on roadways in Texas, one of the nation's leading oil and gas producers. 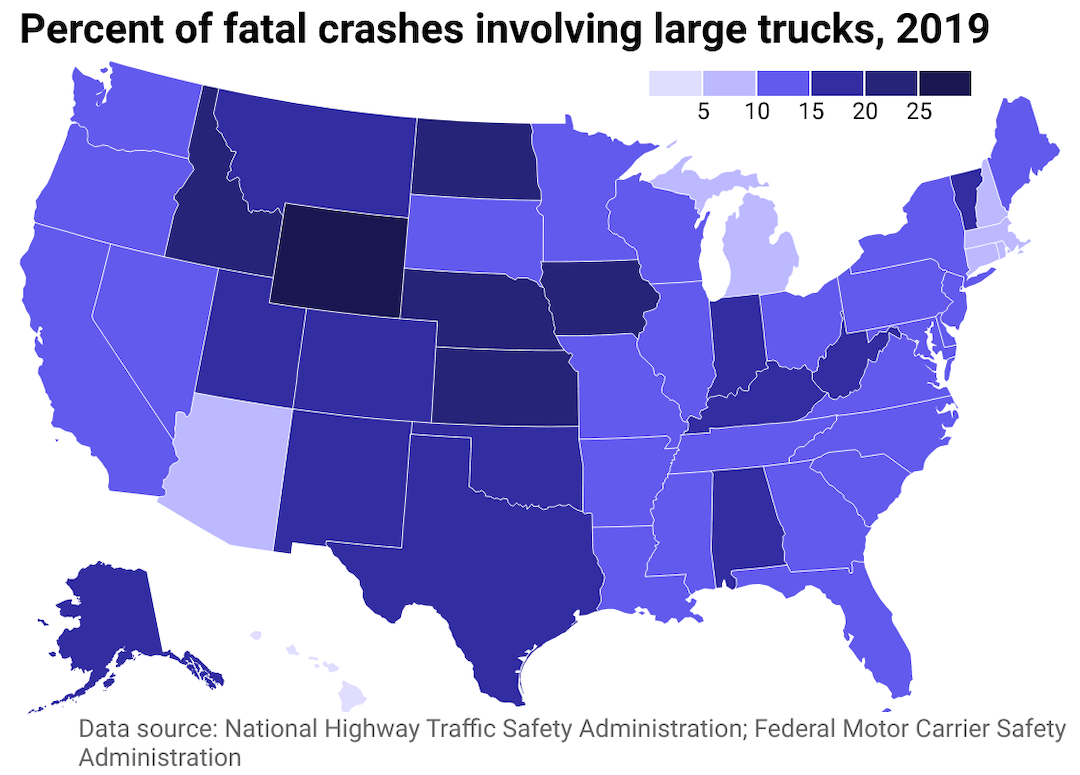 Drivers living in Midwestern states including Kansas, Nebraska, and Iowa, as well as the Western and Southwestern states of Idaho, Wyoming, Texas, and New Mexico, are more likely to die in a fatal collision with a large truck. Washington D.C. saw the fewest fatal crashes involving large trucks along with Vermont, Rhode Island, and Delaware.

The states with the highest propensity for truck crash-related deaths are also some of the largest geographically and the most sparsely populated in terms of areas of population density. They also have some of the largest road systems and the greatest number of lane miles in the nation. Moreover, their rural road networks are vast. Rural roadways tend to be narrower than urban corridors and in more poorly maintained conditions, many of them lacking shoulders and areas for safe pull-off.

About 3 in 4 fatal crashes involving trucks happened during weekdays

While there are any number of circumstances that can lead to a traffic collision, daytime hours tend to have the highest volume of vehicles on the roadway; they are also the hours when the greatest number of pedestrians are out and when the most activity in roadside work zones occurs.

Freight company Heavy Weight Transport Inc. outlined several frequent causes of truck-related accidents, based on the Federal Motor Carrier Safety Administration's estimate that 88% of all truck crashes were due to driver error. Among those that speak to the preponderance of fatal truck collisions during high traffic volume times of day are driver fatigue and driver distraction. The FMCSA further noted that the majority of fatal truck crashes occur on rural corridors and interstate highways, a fact confirmed by NHTSA, which found that 55% of crashes occurred on rural roads and 27% on interstates.

This story originally appeared on The Fang Law Firm, P.C. and was produced and distributed in partnership with Stacker Studio.