A family of firefighters 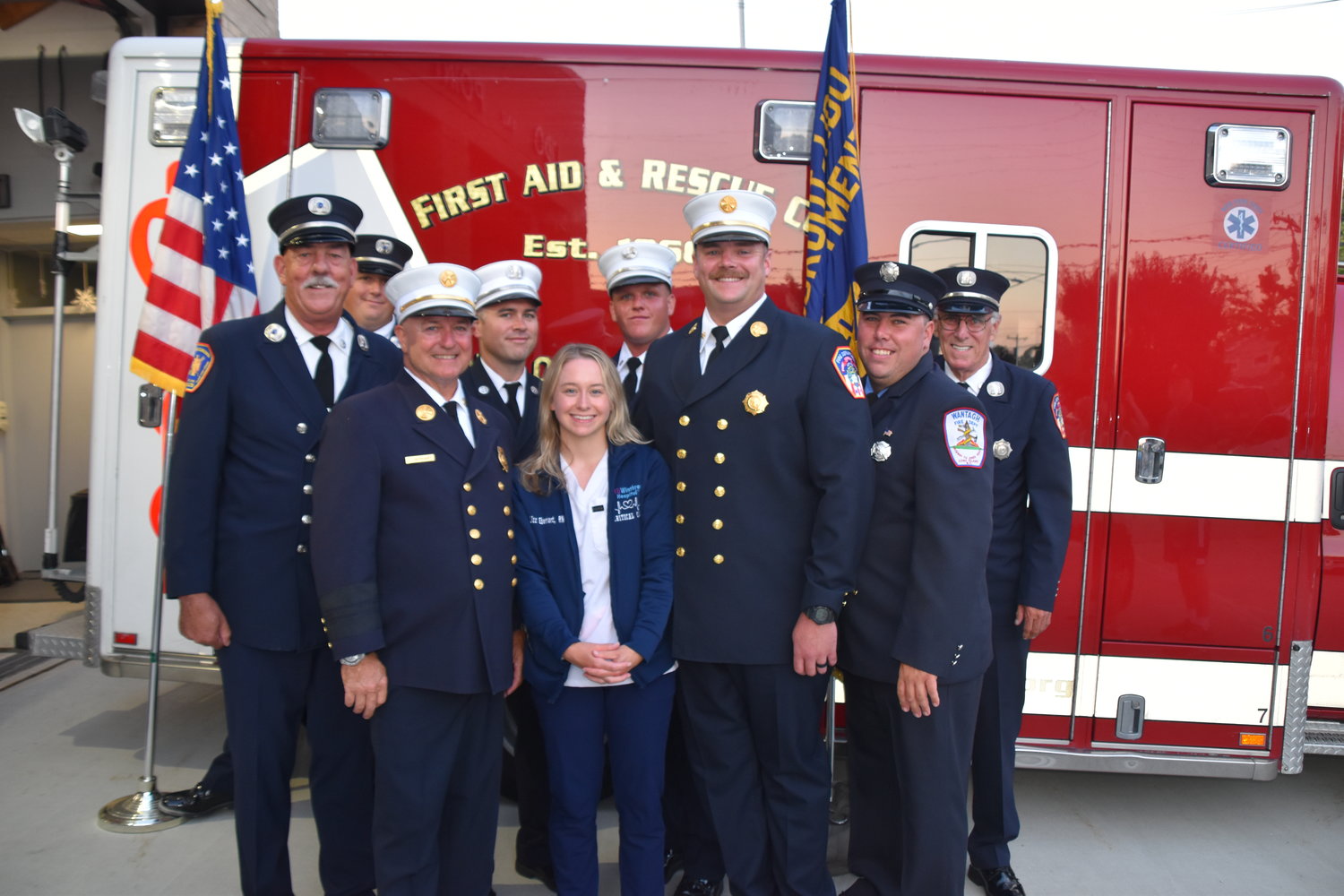 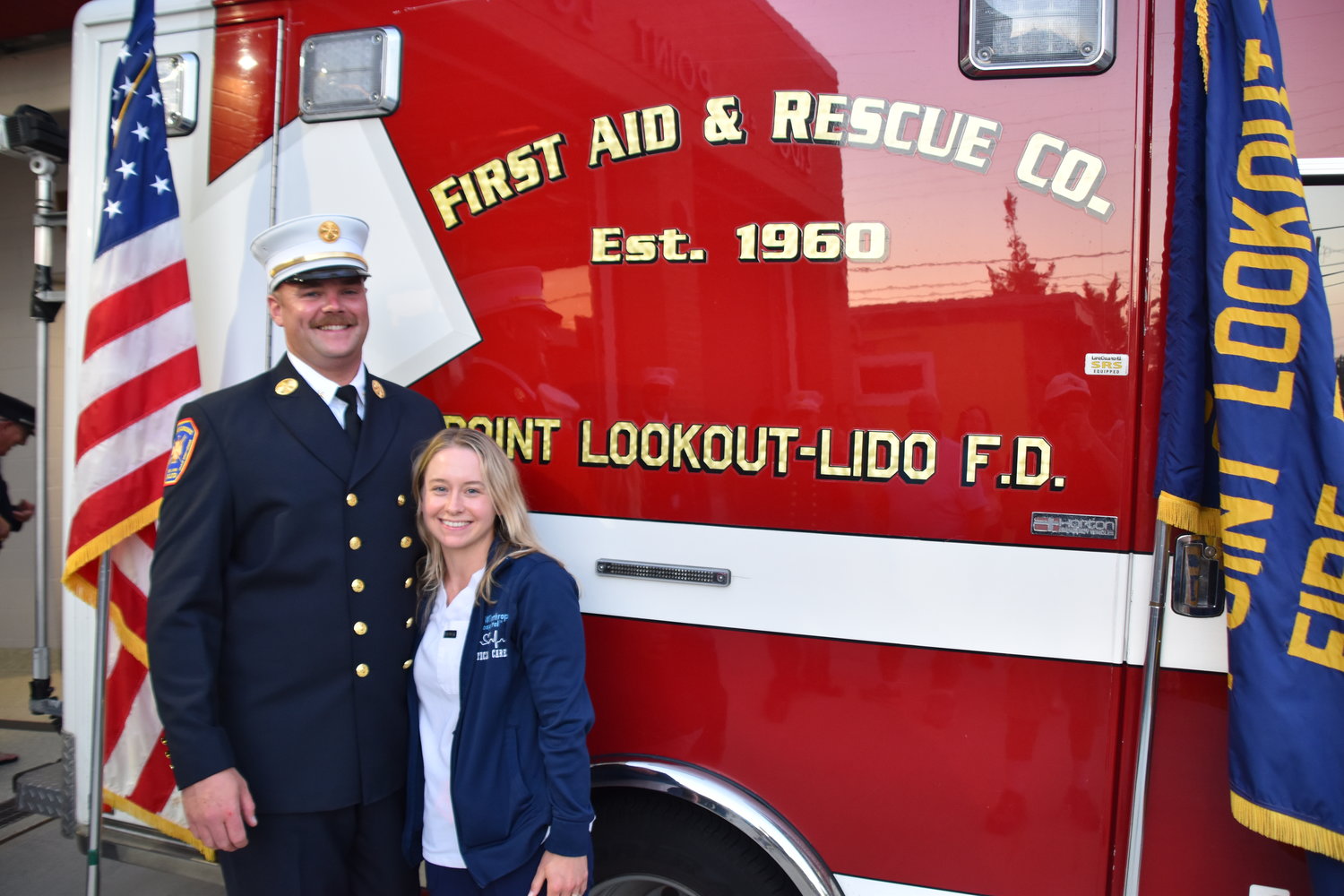 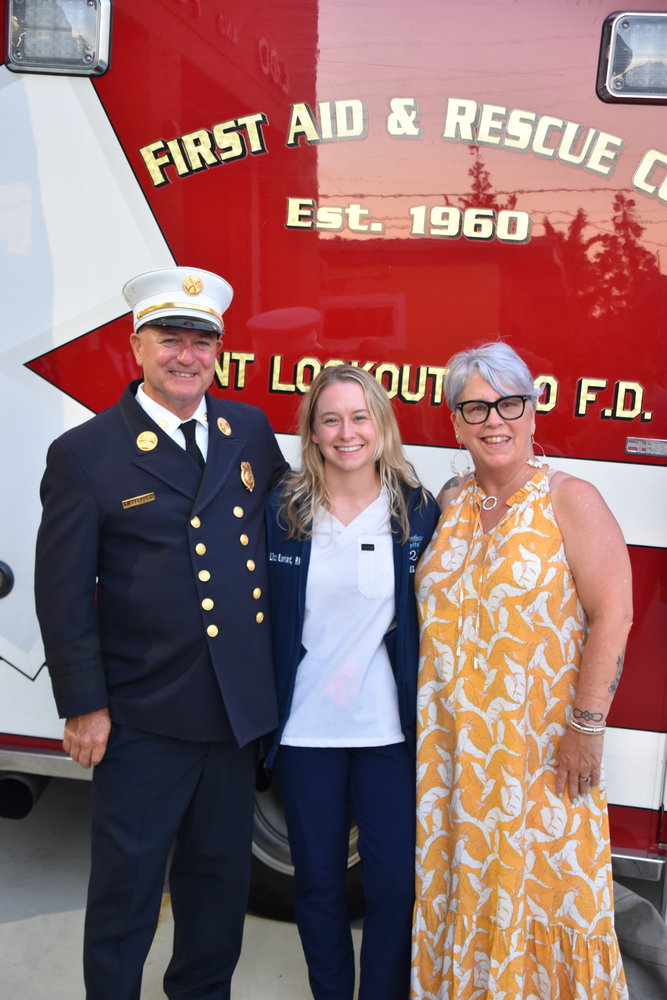 I hope to make the department bigger and bring more people in and give us a better sense of community.”
Elizabeth Eberhart-Meyers, Rescue EMT
By Karina Kovac

Elizabeth Eberhart-Meyers, 29, joined a lineage of service on July 21. Sworn into the Point Lookout-Lido Fire Department in Lido Beach as its first rescue EMT, she joined her husband, Peter Meyers, the second deputy chief, as a third-generation member of the department.

Peter said he was pleased to have her as an asset to the firehouse and community. “We need people like Liz around here, with her background, and she’s local and she loves this town,” he said. “Literally she’s only doing this because she wants to help the community.”

Spanning the South Shore in the Lido Beach, Baldwin, Wantagh, Oceanside and Freeport fire department the Eberharts, Meyerses and Conatys have been saving and protecting communities since George D. Grant died in the line of duty in 1980. Grant was a 24-year-old captain with Point Lookout’s Action Engine Company No. 1, and he died while responding to a Bellmore house fire. While he was inside, the house collapsed and trapped him, and he later succumbed to his injuries.

Grant’s death spurred Douglas Eberhart to join the Baldwin department. Eberhart looked up to Grant, having seen him compete in the tournament truck races when he was a teen, which he still has fond memories of. “He was one of the greatest guys,” Eberhart said. “His nickname was Mouse, and I remember seeing the racing trucks with him and it being so loud — that was all part of my getting involved.” Eberhart now has over 40 years of active service, and is now captain of the Baldwin F.D. His two sons, Joseph and Matthew, are Baldwin firefighters as well.

Elizabeth, the newest in the family to serve, is both over and under qualified for her new position in Point Lookout-Lido. A cardiothoracic intensive care nurse for five years at NYU Langone Hospital, her work is intensely specialized, but she still needs to get her EMT certification to be able to operate on anyone.

“She can hold your heart while it’s beating after surgery, but she needs to learn trauma,” Maggie Conaty-Eberhart said of her daughter’s skills.

“I know a lot about critical care, which is a controlled chaos, sometimes,” Elizabeth explained. “I’m excited to learn emergency first response kind of stuff.  Usually I get people and they’ve been responded to. Even though they’re still sick and fighting for their lives, it’s just a different environment.”

The name of the game now while on call will be timing. “The timing is different, the assessment is different, the care is different,” she said. “It’s all new and the same.” Elizabeth hopes to encourage other women in the area who may be thinking of joining but haven’t. “I hope to make the department bigger and bring more people in and give us a better sense of community,” she said. Saying she hopes that if people see her, a young nurse, succeed in this position, maybe other woman will say, “Maybe I can do that too.”

Volunteerism was on a lot of people’s minds at her swearing-in. “I feel that volunteerism is in decline,” Maggie said, “and the community needs to know that beyond being rewarding, it’s something that you can pass down. People have stopped passing down traditions.”

A member of the Point Lookout-Lido department for 42 years, Thomas Conaty has a theory on why people have stopped contributing. “Nobody has time anymore,” he said. “Years ago, everyone used to work locally. Nobody works local anymore. They travel, and by the time they get home, it’s too late.”

“This is a commitment,” Conaty said. “I’ve been doing it for 42 years, and it’s a commitment. I was lucky when I got in — I had a family behind me.” He went on to say that family members have left Thanksgiving, Christmas and birthdays celebrations to save lives.

Chas Thompson, the Point Lookout-Lido fire commissioner who swore Elizabeth in, said he was just happy to get the extra help now that she’s joined. “The fact is, we get people coming and going, and we know she’s staying in Point Lookout,” Thompson said. “Her skills as a nurse are going to be helping us as well as us teaching her.”