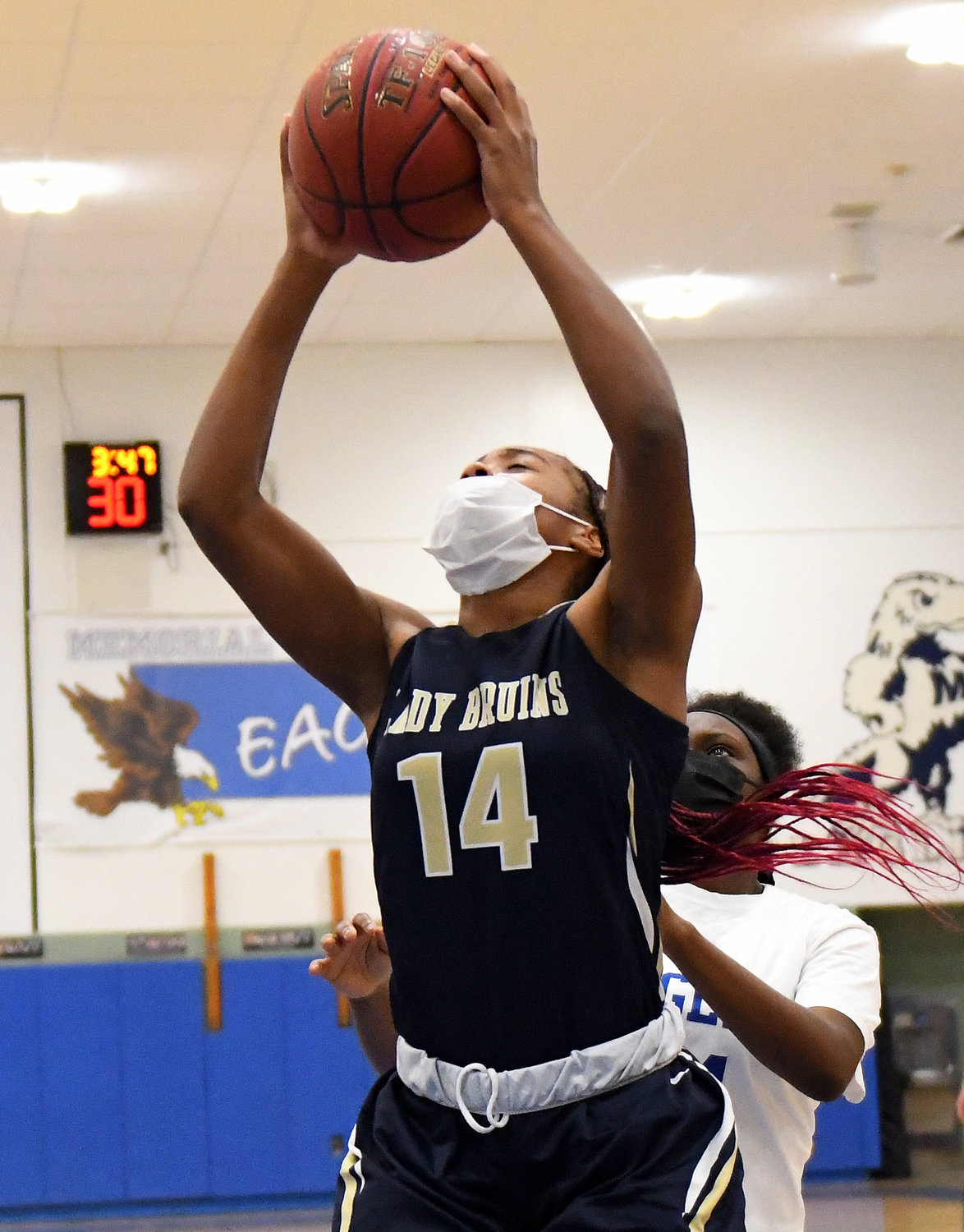 Senior Paris Nosworthy was one of four Lady Bruins in double figures Jan. 13, contributing 10 points in a runaway victory over Westbury.
Neil Miller/Herald
By Andrew Coen

The Baldwin girls’ basketball team has made the most of the few times it has taken the court this winter.
The Lady Bruins entered the week a perfect 5-0 in Conference AA-II after a 46-18 win over Hicksville Friday While the team has played far fewer games than other Nassau County teams due to a three-week pause last month from some positive COVID-19 cases, head coach Tom Catapano sees a positive trajectory heading into the home stretch of the season.
“The team is getting better and we’re headed in the right direction,” said Catapano, who guided Baldwin to seven straight county titles between 2014 and 2020 before no playoffs were held last year due to the pandemic. “The girls are starting to hit their stride.”
Catapano did not play any starters in the Hicksville win in order to give his deep bench extended minutes. Freshman forward Toni Smith had a big all-around game with eight points and 12 rebounds.
“She is really emerging,” said Catapano of Smith. “She has been able to fill a role for us, especially defensively and rebounding.”


Baldwin had four players in double figures in a 65-33 win at Westbury on Jan. 13 led by 14 points from junior forward Dallysshya Moreno in a game which the Bruins stormed out to a 50-8 halftime lead.  Freshman guard Payton Dulin also had a big game with 12 points and five assists while junior Renelle Grannum and senior Paris Nosworthy both recorded 10 points.
The domination continued in Baldwin’s next game with a 64-28 win at Valley Stream Central where the Lady Bruins led 29-0 after the first quarter and 44-6 at halftime. Moreno was once again the team’s leading scorer with 13 points and eighth grader Alyssa Polinia had 11 to go along with five steals.
Jumping out to big leads has been commonplace for Baldwin this year including a 75-43 win against East Meadow on Jan. 11 where the Bruins led 33-8 after the first quarter and 58-16 at halftime. Moreno scored 18 points while Grannum tallied 10 along with four steals. Nosworthy, Smith, Nosworthy and Dulin all finished with nine points.
Baldwin is next in action this Saturday for a noon road game at Plainview JFK and then will travel to The Bronx for a non-league game against New York City Catholic foe Nazareth. The Lady Bruins then return home Monday evening for a rematch with Plainview JFK before hosting Herricks on Tuesday.
Catapano said the Nazareth game and other tough non-league opponents on the schedule are geared toward preparing the team for a potential deep playoff run against the state’s top programs. He is hoping the St. Mary’s holiday tournament, which was postponed during Baldwin’s COVID pause in late December, can be rescheduled in February to give the Bruins a chance to compete against both St. Mary’s and Brooklyn’s South Shore High School, the top-ranked program in New York State.
“I am looking forward to really challenging ourselves with our non-league schedule,” he said. “We’re working hard to hopefully make a deep playoff run.”