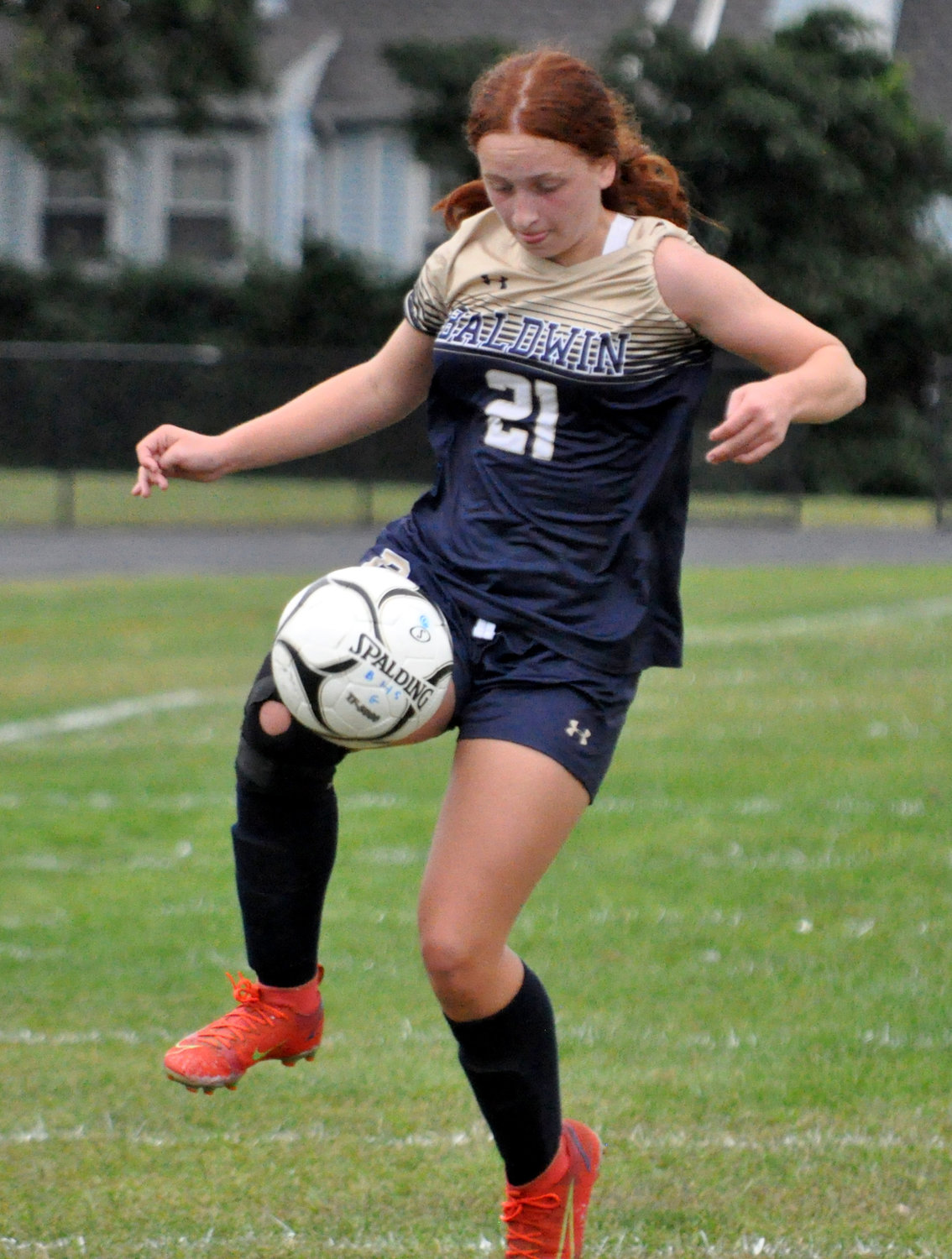 It only took one game for Baldwin girls’ soccer to equal its point total from a rough spring season.

The combination of a short roster due to Covid and an unforgiving schedule resulted in zero wins and a tie over a dozen games, but coach Lee Rogers is already seeing promise despite only five returnees.

The Lady Bruins earned a 1-1 tie with Hicksville in the Conference AA-2 opener on Sept. 10 as a trio of newcomers starred. Eighth-grade goalkeeper Dee Ikechukwu made 11 saves in her varsity debut, including a few from point-blank range in the closing stages, and sophomore Renelle Grannum scored off an assist from freshman Annabelle Lopez.

“I was very pleased,” Rogers said. “I knew Hicksville would be a difficult opponent and had the top returning goal scorer in the conference. We scored in the 22nd minute and they got even right before the half. It’s definitely a performance we can build on.”

One cloud hanging over the opener was the potential long-term loss of Grannum to a knee injury suffered in the second half. She was elevated to the varsity roster in the spring after the JV campaign ended and features game-altering speed. “We’re waiting to hear how long she could be out and hoping for the best,” Rogers said. “She’s so fast and scored on a beautiful breakaway against Hicksville.”

Olivia Hoffmann notched the equalizer for the Comets, who went 8-1 last season behind leading scorer Julia DeTurris. Rogers said a key part of Baldwin’s gameplan was to shadow DeTurris with sophomore Anna Wehr, who he said did a tremendous job.

“We might have Anna move to forward if Renelle is out, but we will also utilize her to mark a top opponent,” Rogers said of Wehr, who scored twice last Friday in a 5-0 win over Uniondale. “She’s strong and quick. We had her follow DeTurris around the whole game and it paid off.”

Lopez is another young forward with talent, the coach noted. “Annabelle has excellent foot skills and we’re trying to build up her confidence because she’s capable of taking on opponents one-on-one,” he said. “She made a great pass on our first goal of the season.”

Baldwin (1-0-1) struggled to put the ball in the net throughout the spring, but Rogers said competing in Conference AA-2 always requires a quality keeper nonetheless. He coached Ikechukwu for one game at the middle school level and was immediately impressed with her positioning and awareness. “She plays club soccer and has great all-around fundamentals,” he said. “We’re working on building her communication with the defense during practice and each game she’ll get better.”

Senior captains Rubi Perez and Roscary Munoz lead the defense, which includes junior Samantha Torres at right fullback and freshman Averi Thomas on the left. Thomas could see some time at midfield, where senior captains Taylor and Jessica Darcy are team leaders in their third varsity campaigns. The lineup was bolstered by the return of seniors Stephanie and Melanie Hernandez, who returned to the district following a brief move out-of-state, Rogers said.

“We have some jelling to do, but it’s a great bunch of girls,” Rogers said.