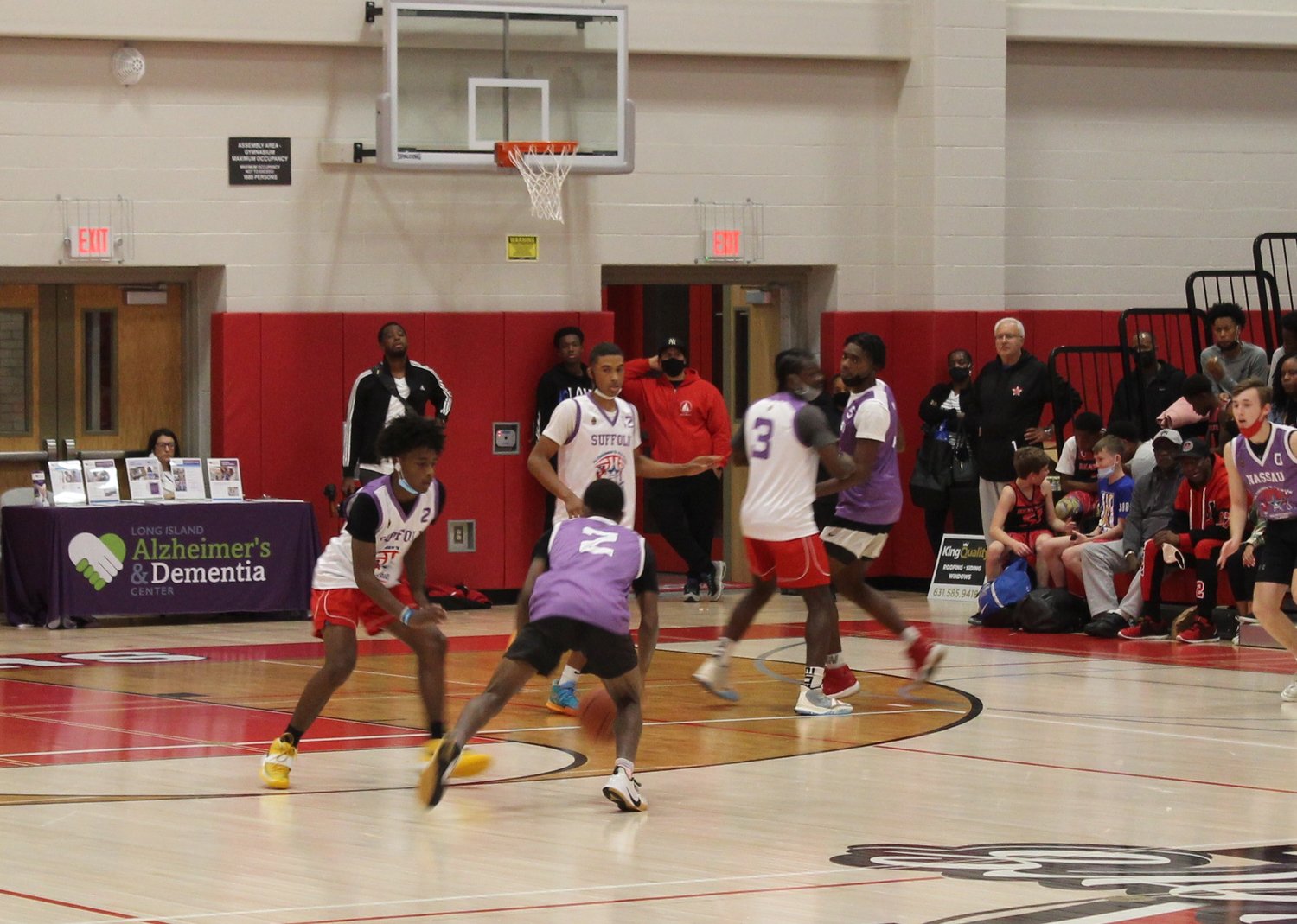 The audience and teams wait in anticipation to see if Jacob Oka’s layup lands, it does, and the Nassau County team scores another point.
Karina Kovac/Herald 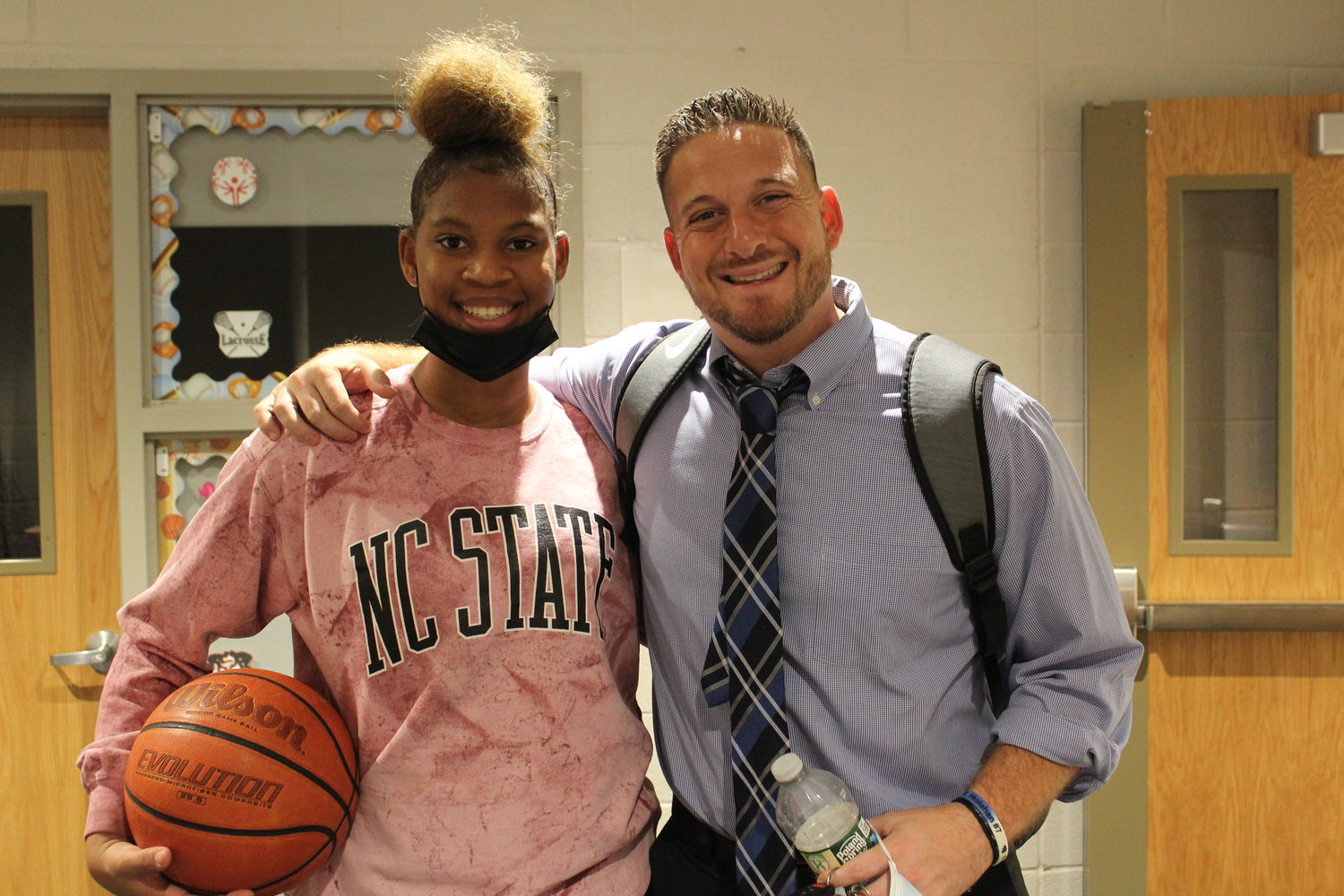 Dallysshya Moreno and coach Tom Catapano enjoyed representing Baldwin and supporting a great cause, happy with their win and being able to spread awareness through the community.
Karina Kovac/Herald 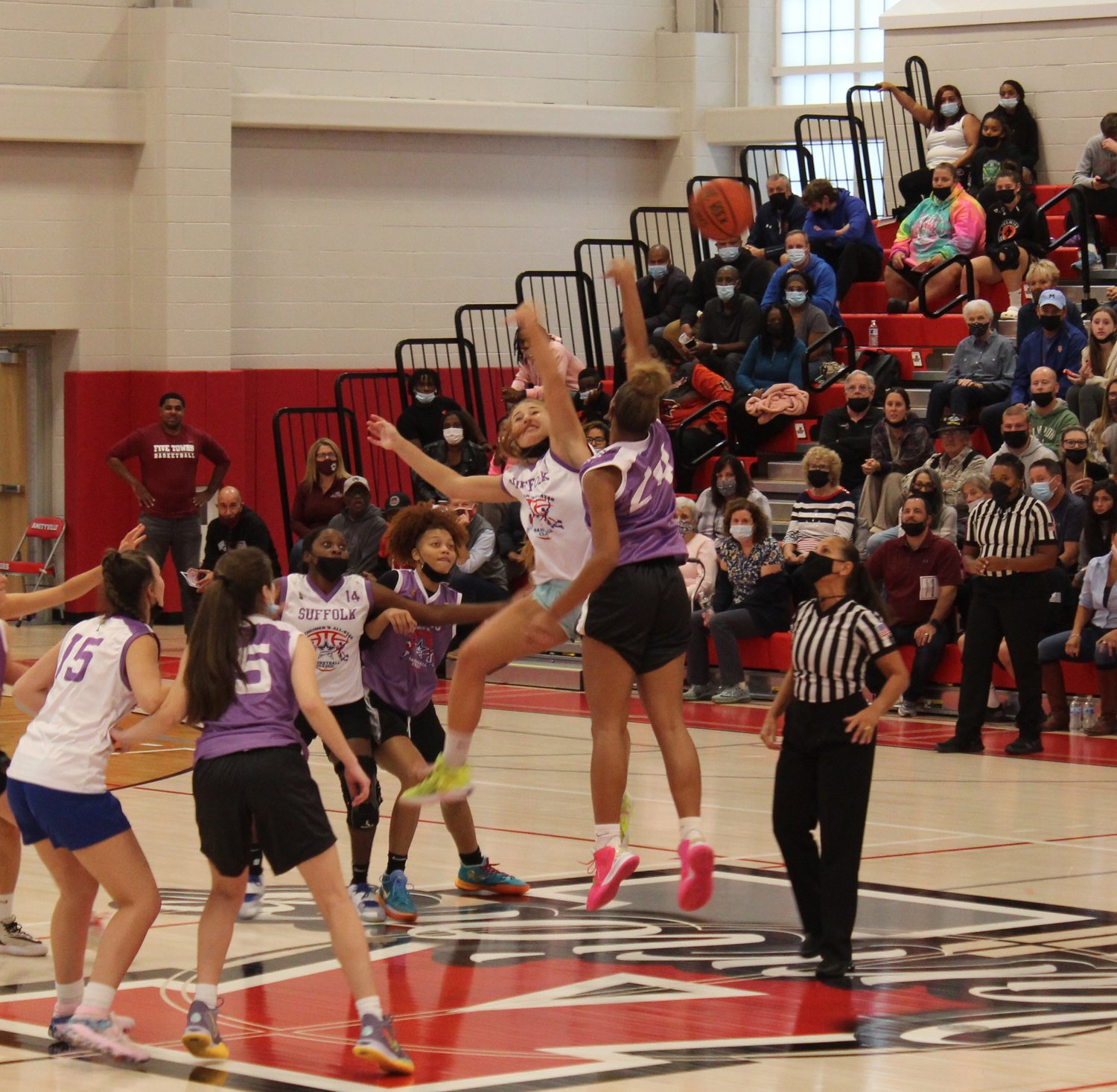 Dallysshya Moreno springs into the air during the jump ball, the first of many times Moreno would dominate the game.
Karina Kovac/Herald 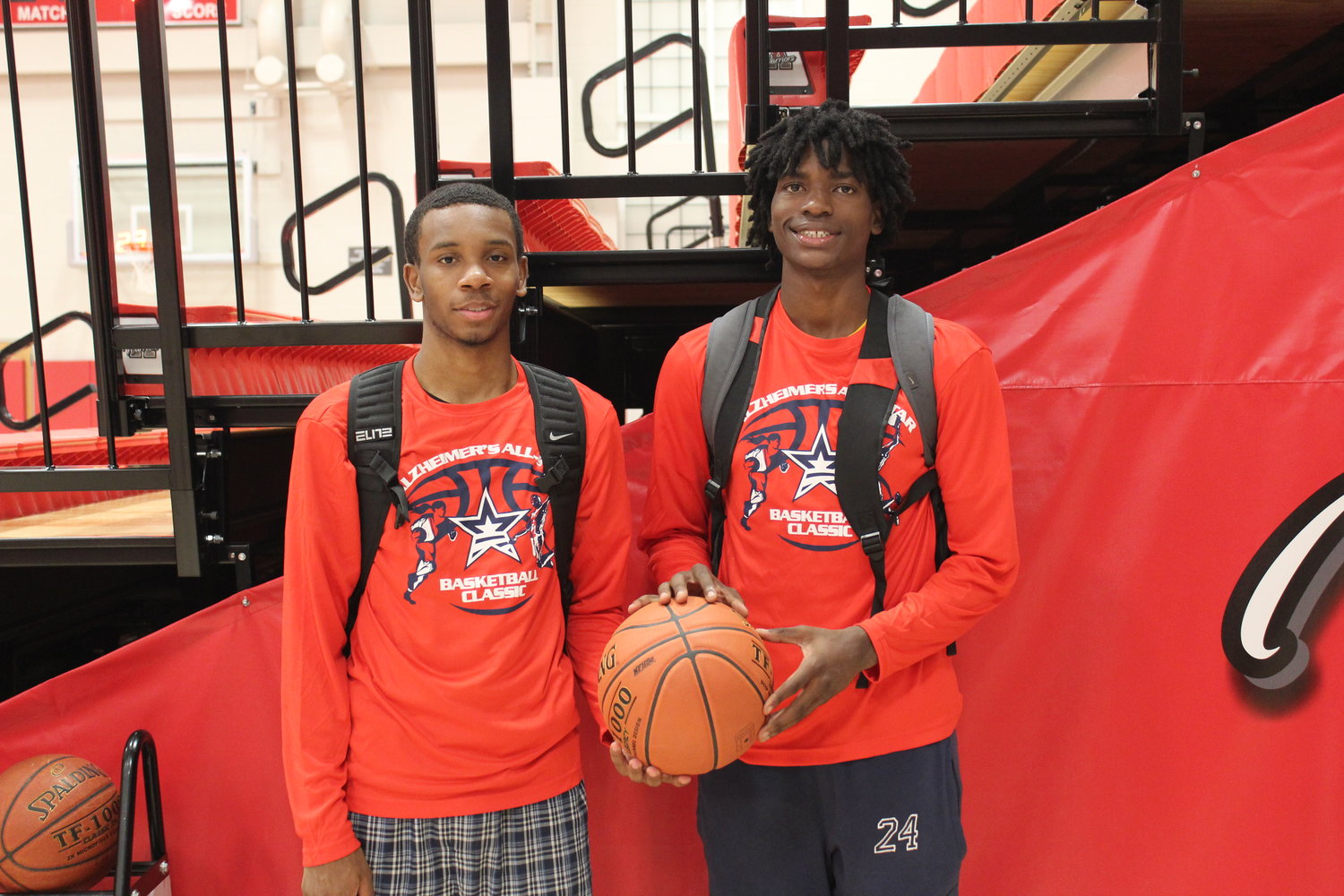 Jamir Stewart and Jacob Oka loved the high intensity energy of the friendly competition between the teams.
Karina Kovac/Herald
Previous Next
Karina Kovac

Catapano said his involvement started when, “Coach Gordon Thomas, the founder, called me up and asked if I would be willing to be held coach, and I said I’d be honored.” The Nassau County team ended up winning 95 to Suffolk’s 61. “Our Nassau team did a phenomenal job today. They shared the basketball... they’re extremely talented and very coachable and we had a who’s who that showed,” he added.

Player #24 Moreno had to go through a three-day tryout process that was open to all Nassau County schools and only took the top 14 girls. She said, “I was honored to be a part of this the tryouts very, very hard and we worked really hard in the practice.”

Being grouped with eight other schools, the girls had to learn to work together with new faces. Moreno said of the experience, “It’s a great group of girls, and we definitely shared, even though we didn’t know each other; we played like smart basketball players. It’s a great cause. It allows kids to learn about [Alzheimer’s] as well.”

Oka, player #15, said the game was “really fun; we had a lot of exposure playing here because they didn’t know about us till we represented us more. I knew we were going to win we have more heart than them and played more as a team.”

Win the team did, with 95 to the Suffolk team’s 85. At one time down by nearly fifteen points, the game took a turn after intermission, soon becoming a three- and sometimes one-point game. The team included ten other high schools, and of the players Oka says, “I’d like to play with them in the future more, only playing for two days beforehand we had good chemistry.”

Oka’s classmate Stewart agreed saying, “I like the environment, the environment is cool, everyone plays fast intensity…Baldwin on top.” Baldwin and Stewart were on top, especially after the other team knocked the basketball hoop off-kilter and Stewart climbed a latter to try and set it straight.

Assistant coach Burton said it felt great representing Baldwin especially since, “I love it; it’s the town I grew up...Winning feels so much better than losing.” He also stated, “They did a great job, they brought Baldwin pride to this game today, they played hard, played unselfish, and played together.”

One-hundred prevent of the proceeds from the event go to the Long Island Alzheimer’s Dementia Center and Day Haven Adult Day Services. The Alzheimer’s All-Star Basketball Classic fundraiser was founded by Gordon Thomas in 2012 in memory of his father Detective John Edward Thomas Sr.. Thomas is an avid supporter in the fight against Alzheimer’s disease, creating this event out of his experience dealing with his father’s dementia. Gordan was an All-Star basketball player at St. John’s University and was drafted in the New York Knicks.