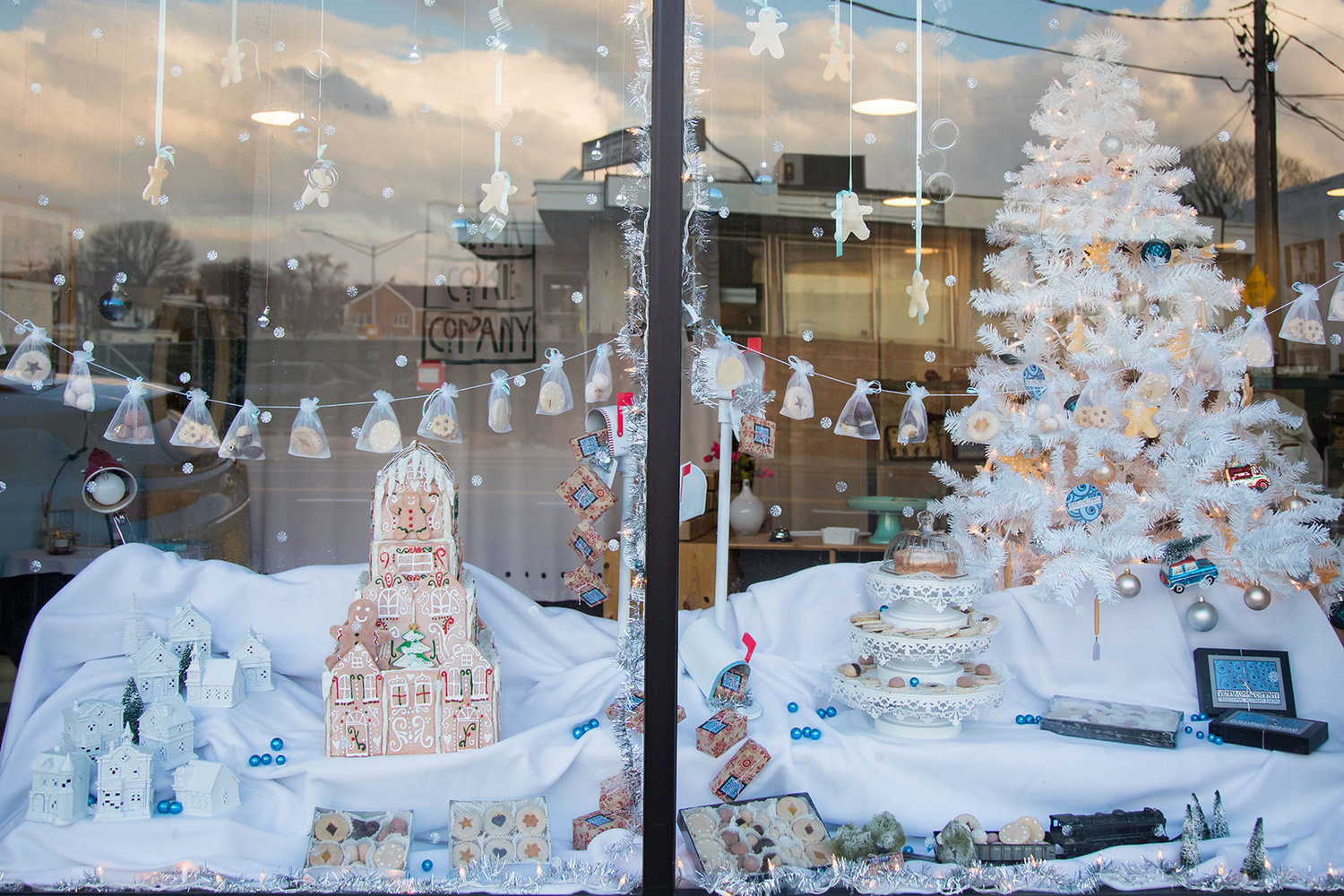 The Vienna Cookie Company in Baldwin is offering passersby the chance to win a surprise gift on Dec. 11 if they can find three hidden objects in the shop’s window display.
Karina Kovac/Herald 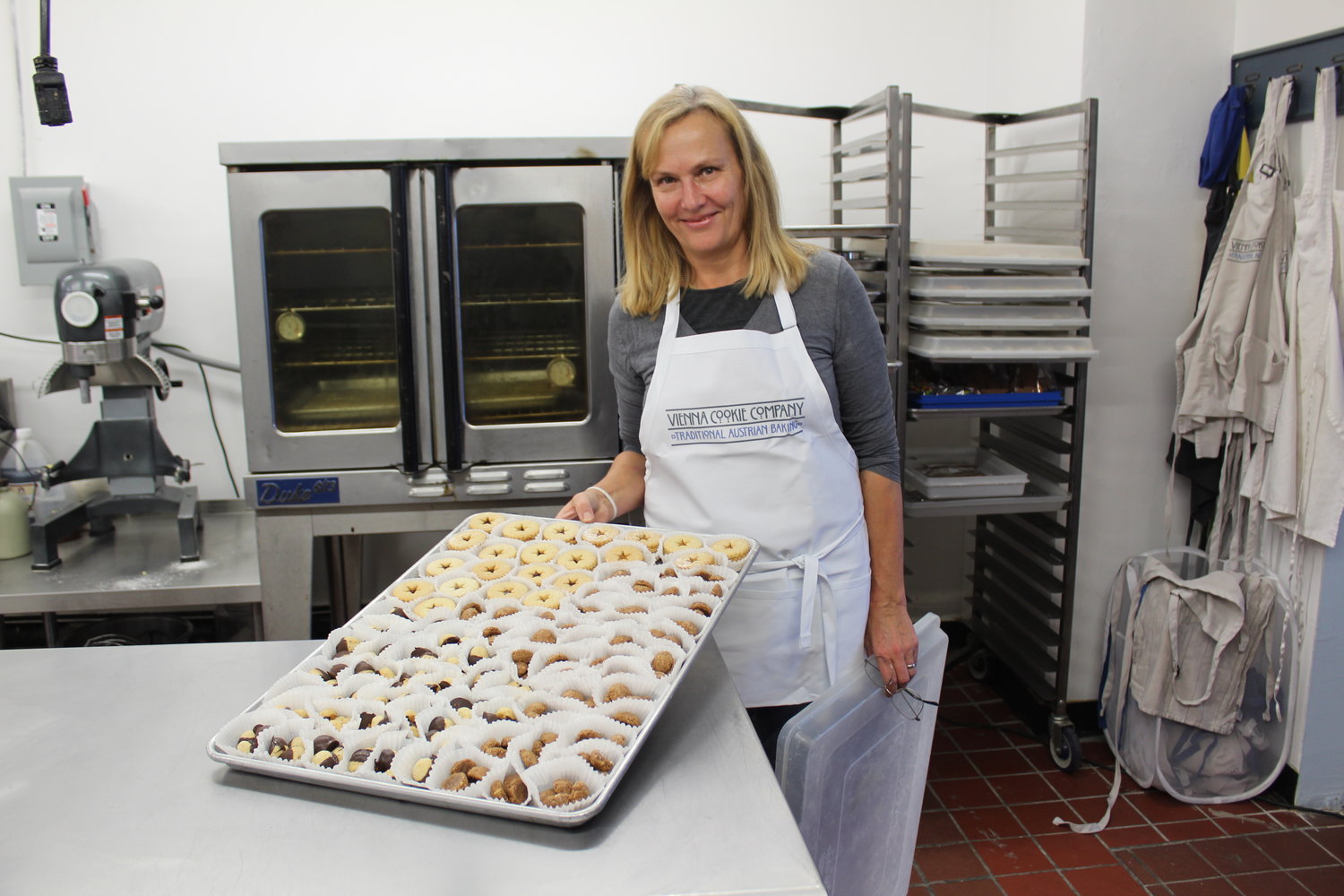 It’s in our culture to bake--lots of people would cook in Austria, especially in Christmas time.”
Heidi Riegler, owner
By Karina Kovac

The Vienna Cookie Company in Baldwin is offering passersby the chance to win a surprise gift on Dec. 11 if they can find three hidden objects in the shop’s window display. The shop, which is a small local hub for Austrian, Czechoslovakia and German residences alike has been in business since 2016.

Owner of Vienna Cookie Company Heidi Riegler says patrons don’t just come for the cookies: “A lot of the time people come in memory of their grandma, who’s Austrian and she’d bake them strudel, or they traveled to Vienna and enjoyed the coffee and Shachertorte.”

Wanting to bridge a bigger connection with the public, Riegler has decorated her storefront like a winter wonderland. She hopes businesses nearby also decorate their storefronts with Christmas and holiday decorations to get downtown Baldwin in a festive spirit.

“We have transformed our store windows into a magical winter wonderland with a display of yummy holiday cookies and treats," Riegler explained. "Our Scavenger Hunt will be a fun event for young and old--Who would not want to win a sweet surprise gift?" she added.

The pastry shop specializes in Viennese cookies and cakes, like the Linzer tart, which is their signature cookie, and other classic Austrian desserts, such as Sachertorte, poppy cakes, Gugelhupf and apple strudel.

Alexys Ellington is an Assistant Baker at Vienna Cookie Company and went to the Paul Smiths College for Baking Arts and Service Management. Although only at the pastry shop three months, the 22-year-old recent college graduate said she enjoys working there: “It’s really nice environment…Heidi is dedicated; she loves her work.”

Riegler came from Austria to American in her mid-20’s in hopes of exploring the world. The Christmas season is an especially fond time for her because it reminds her of cooking with her mother and grandma in Austria when she was younger. She told the Herald, “It’s in our culture to bake--lots of people would cook in Austria, especially in Christmas time.”

After moving from California to Baldwin in 2009, she wanted a profession using her hands, so she left directing marketing and communications for the National Academy Museum and School of Fine Arts in New York City to open a pastry shop. She mustered up the recipes she could remembered and contacted her family for more to officially start her business, saying, “It’s all about the recipes, really.”

Originally, she only baked in the shop for the holiday season, but she had to decide whether baking would become her life. She would say to herself, “Either I do it all the time or stop.”

And then in 2016 at a trade show for new products and brands, the New York Times came up to her table and decided to write about her story. Also approaching her booth was Williams-Sonoma, an online retail company that now sells her products on their website.

Vienna Cookie Company is located at 782 Merrick Road, west of Grand Avenue and on the south side of the street. The gift shop at is open Tuesday to Saturday from 10 a.m. to 5 p.m. during the holiday season. For more information, visit www.viennacookiecompany.com

Former Businessperson of the Year retires