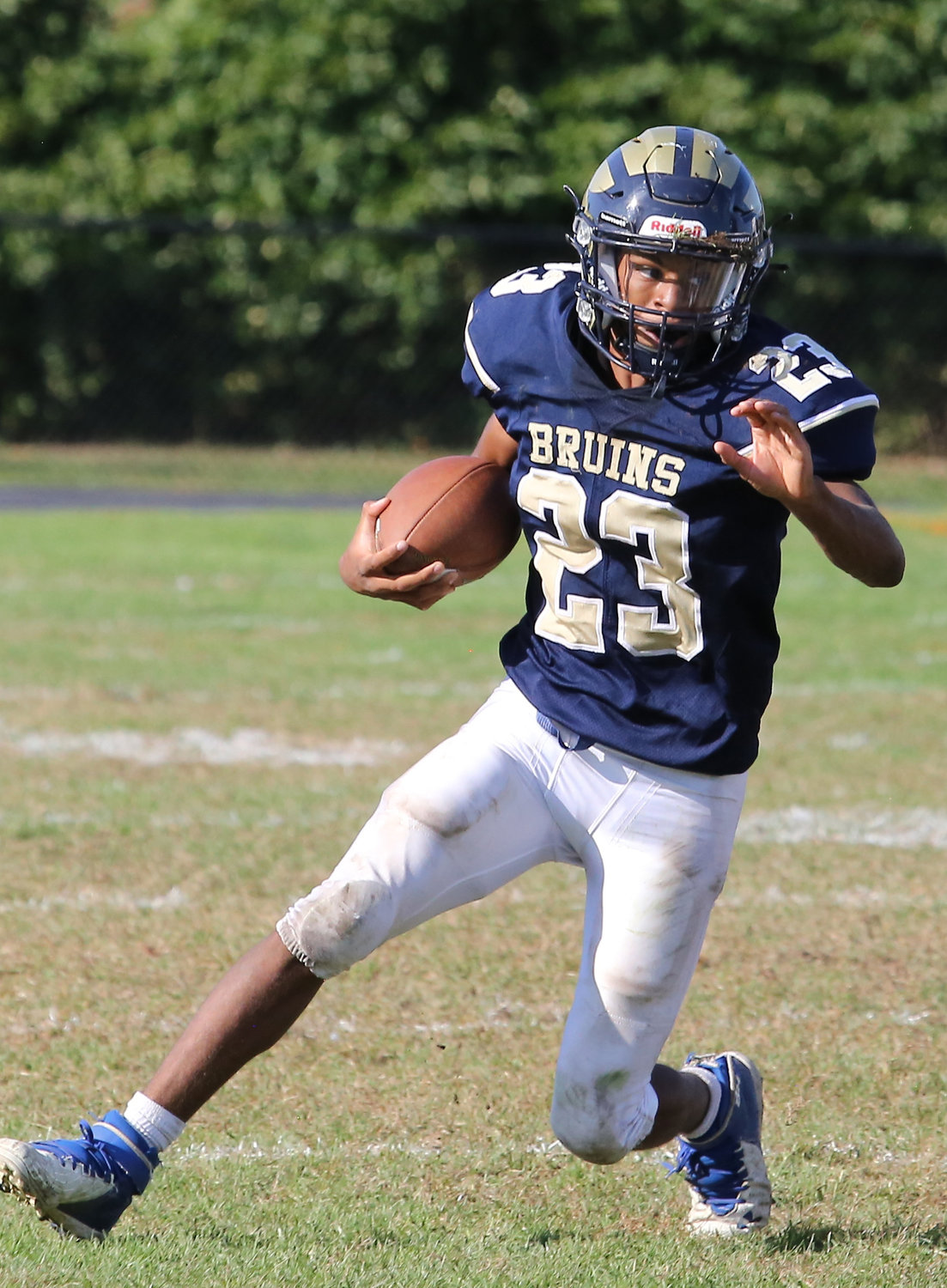 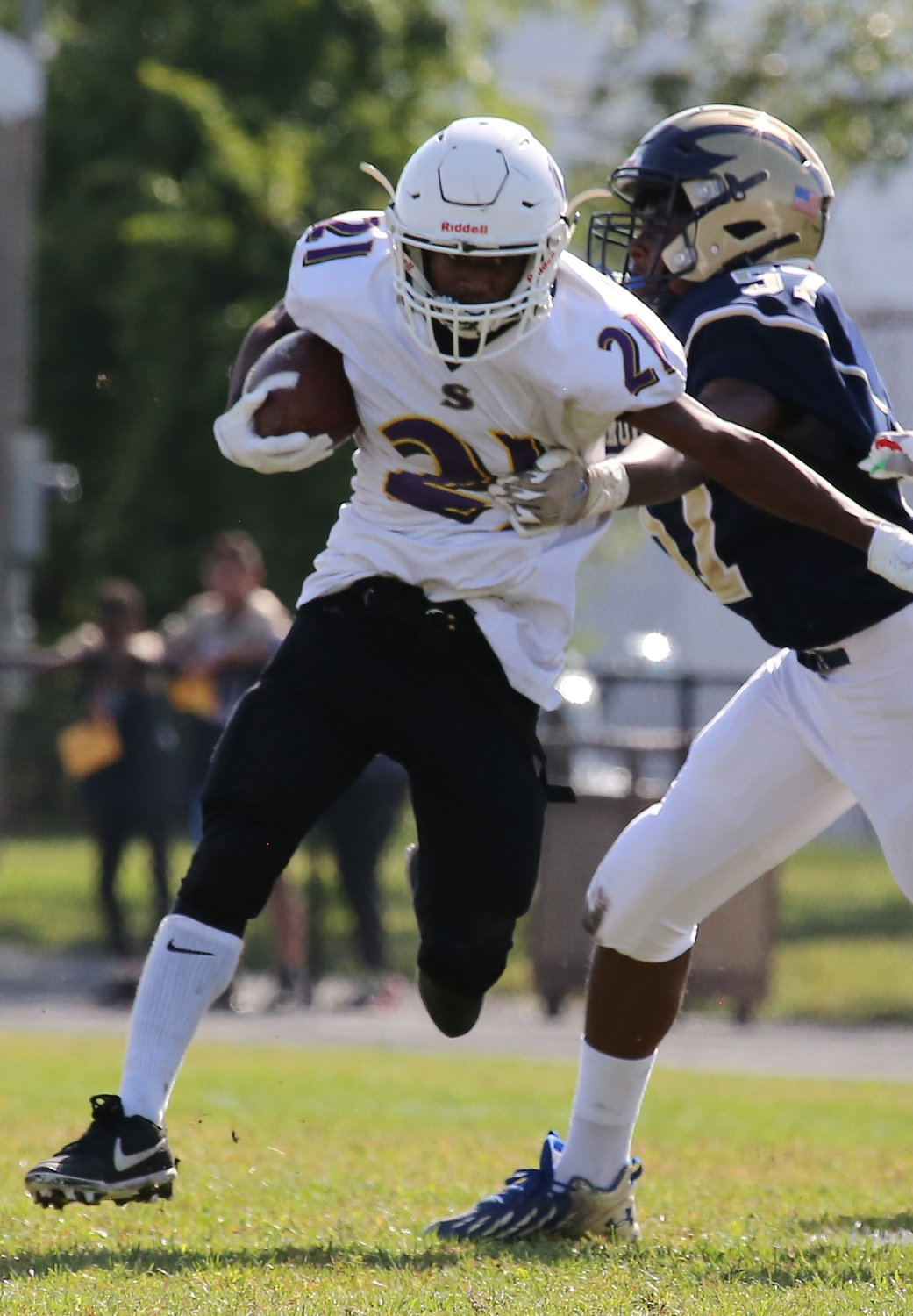 Baldwin’s home football game against Sewanhaka last Saturday was a tale of two halves.
Entering the second half, the visitors held an 8-point advantage, and were essentially in the drivers’ seat to clinch a much-needed victory. However, the Bruins proved resilient and utilized a strong second-half surge to secure a 35-20 victory in Nassau Conference II.
“It was a tough first half at the end. We just made some mistakes,” Baldwin head coach Frank Chimienti stated. “No one panicked. The kids handled it really well, we made a few minor adjustments and from there the kids did a phenomenal job.”
It was Baldwin’s rushing attack that acted as the central catalyst to its second victory in four games. It scored rushing touchdowns on all three of its second-half possessions, and did so without completing a single pass. Sewanhaka had no answer for the Bruins’ multifaceted ground game. Junior Anthony Byron had over 200 rushing yards and three touchdowns, and freshman quarterback Angel Johnson contributed 55 rushing yards on 8 attempts.
“It was just heart,” Byron said. “Every run play the O-line gave me something to do and somewhere to go. I can’t even spot out one guy because everyone stepped up.”


The defense as a whole also answered the call when the Bruins needed them most, as they managed to shutout the previously potent Sewanhaka offense in the second half. The finishing touch on this stout effort was a diving interception by junior Cedric Jean-Pierre on the final possession of game.
Baldwin will look to maintain a solid level of play when it hosts Mepham at home this Saturday at 2 p.m.
For the Indians, the game essentially slipped through their fingers, mainly due to their inability to contain Baldwin’s dynamic rushing efforts.
“Our rush defense is something that is going to be a point of emphasis for us this week,” Sewanhaka assistant coach Nick Rawls stated. “Teams are going to see it and they are going to try and exploit it, so it’s something that we’ve got to keep practicing.”
Their offense also stalled mightily following halftime. They scored almost at will during the first half, which was mainly a byproduct of the deadly aerial connection from quarterback Dominick Balleta to wide receiver Tyler Harts. The most impressive of these was a lob that Balleta threw up to Harts after evading a blitzing linebacker, and Harts showcased incredible vertical capabilities in jumping over the defender and bringing in the touchdown.
However, following this magnificent leap, the Indians were held off the scoreboard. They did nearly take a separate drive the distance, yet were stopped on the 2-yard line. This stagnancy accompanied with Baldwin’s refusal to punt the ball proved too much to overcome.
While the Sewanhaka defense as a whole did struggle, it did manage to generate some big plays. Caireek Belnavis had an interception on the sideline that he returned for solid yardage, and they also recovered a kickoff.
Sewanhaka (0-4) will look to get back on track and get its first win of the season this Friday night at Glen Cove. Kickoff is 6 p.m.