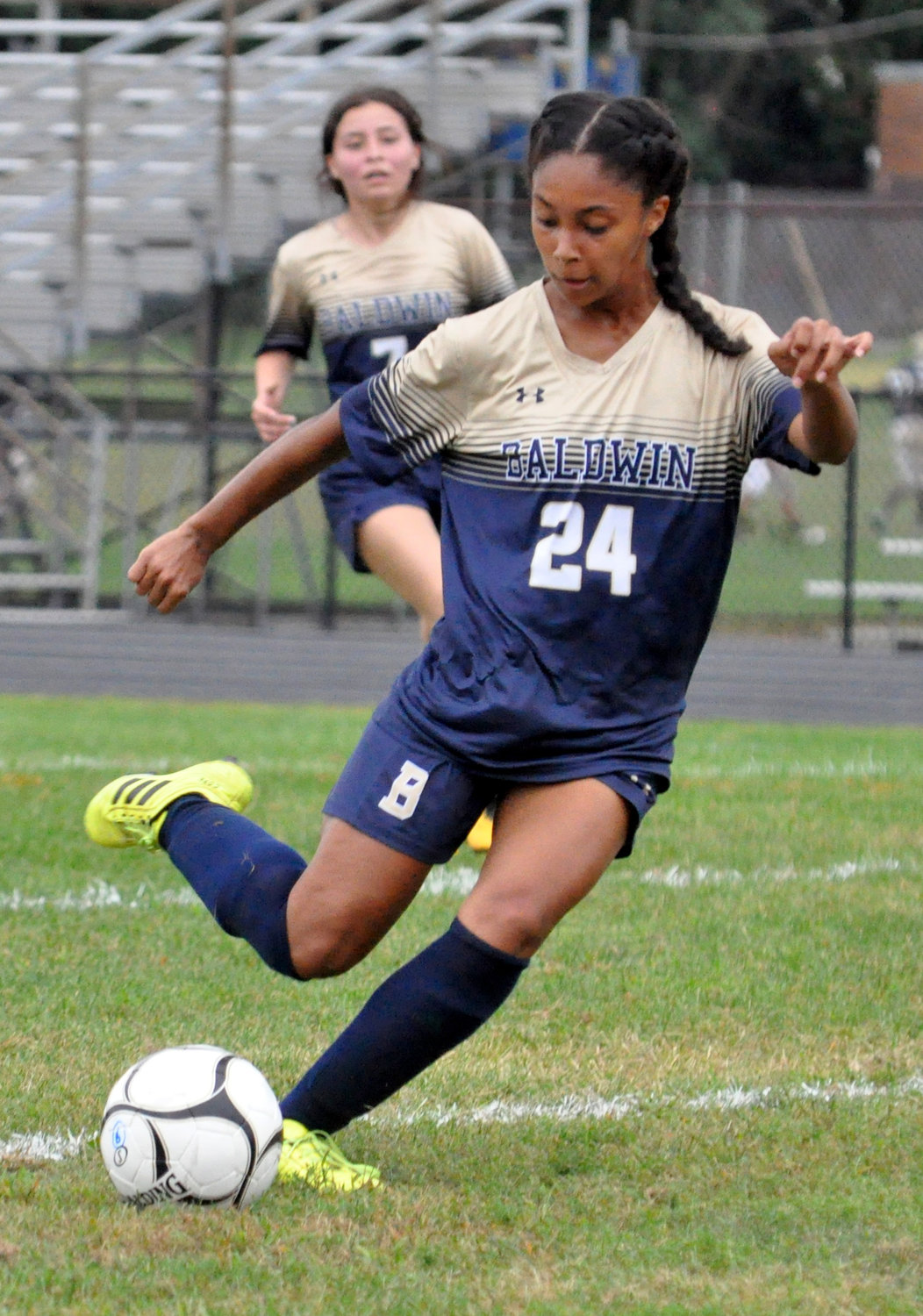 Annabelle Lopez, who had 4 goals and 3 assists this fall, was part of a prolific offense for a Baldwin side which won 10 games in Conference AA2.
Tony Bellissimo/Herald
By Brian Kacharaba

Now that’s an improvement.
After a winless spring and a 3-11-1 mark in 2019, the Baldwin girls’ soccer team made huge strides this fall by amassing 10 wins while remaining in conference title contention for most of the campaign.
Baldwin capped its 10-3-1 season with a 5-1 win at Freeport on Oct. 19 and finished third in Conference AA-2 behind Herricks (13-1) and Hicksville (12-1-1). Unfortunately for the Bruins, only the division champion advances to the playoffs, but Baldwin played a hand in determining the winner with its 1-1 tie against Hicksville in the season opener.
Even though the injury bug reared its ugly head at times, the depth of the team and cohesive mix of rookies and veterans were able to overcome those absences.
“I’m really proud of the girls,” said coach Lee Rogers. “I ended up bringing some newer girls in, we had a good setup with the captains this year, we had good players playing the midfield, so we controlled the midfield a lot of times. We just played much better as a team.”


Every member of the team contributed to that success…literally. Of the 17 girls on the roster, 16 scored a goal, including eighth-grade starting goalkeeper Dee Ikechukwu, and 14 had at least one assist, which resulted in 52 tallies overall.
Not to be outdone, the Bruins’ stifling defense allowed just 10 goals with eight shutouts. The defensive corps was led by senior center backs and captains Rubi Perez and Roscary Munoz and flanked by junior Samantha Torres on the right side and freshman Averi Thomas on the left.
“Ruby was very strong on defense,” Rogers said. “She has speed and her and Roscary worked really well together. With Averi, her ball skills really helped us. She was really good under pressure. And Sam was nice and solid. The four of them communicated with each other well.”
Ikechukwu had three double-digit save games and the youngster did not look like a girl among women on the pitch.
“She did a great job,” Rogers said. “Going forward, she just needs to talk a little more, but that has a lot to do with the fact that she’s an eighth grader.”
Rogers lauded senior midfielders and sisters Taylor (4 goals, 7 assists) and Jessica Darcy (7-3) for their play on both ends of the pitch as well as left midfielder Melanie Hernandez (2-0), who was the “most improved player” on the team.
Senior forward Stephanie Hernandez returned to the team and led the Bruins with eight goals. There are other budding stars at that position in Anna Wehr, who chipped in seven as a sophomore, Abigail Ford, whose hat trick against Westbury on Sept. 20 highlighted her five-goal campaign, and fellow freshman Annabelle Lopez, who had two of her four goals in that same game.
The team’s season did not go unnoticed by the awards committee. Taylor Darcy and Stephanie Hernandez earned All-County honors and Jessica Darcy and Perez were the county’s honorable mentions. Melanie Hernandez and Munoz are All-Conference members.