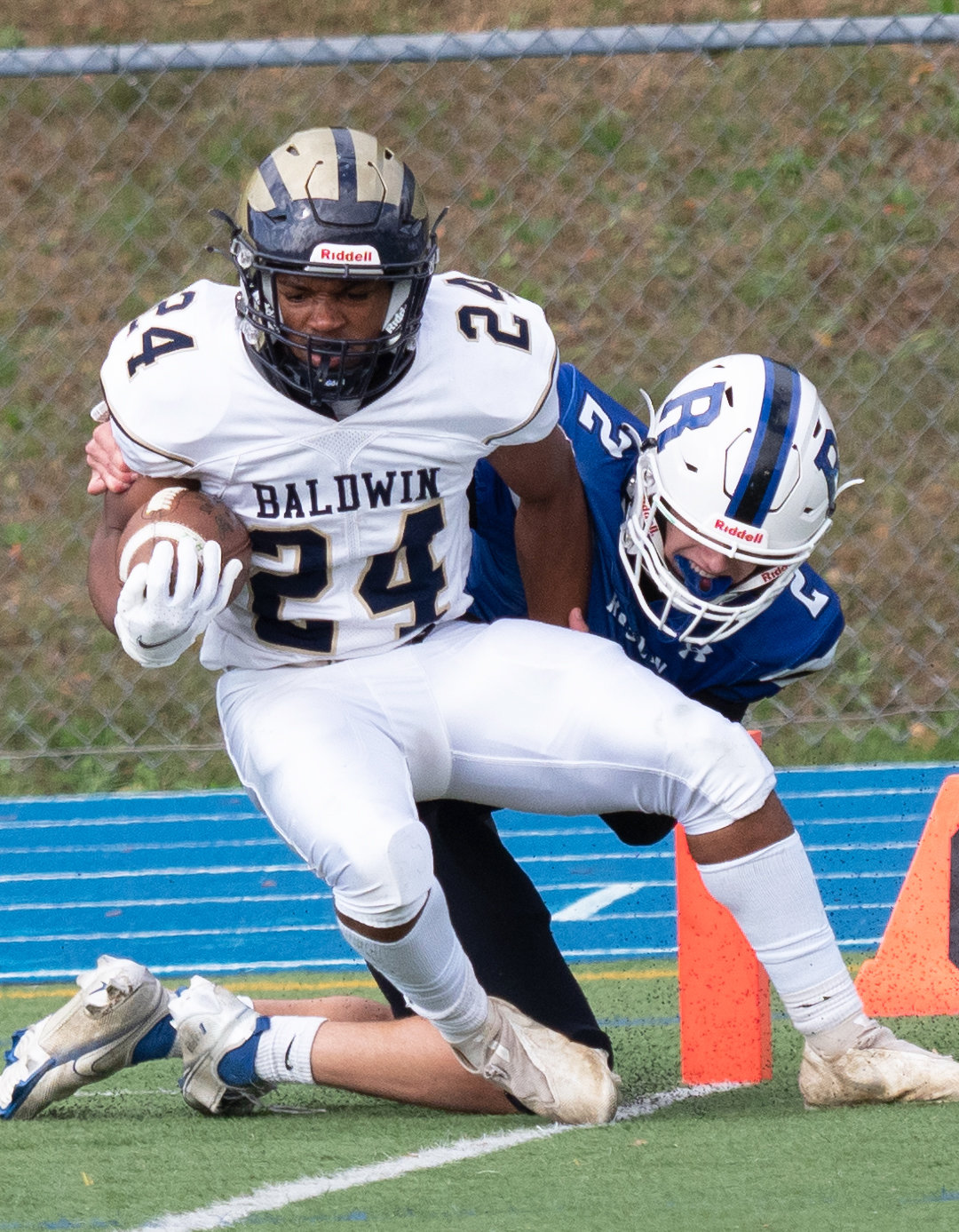 Sophomore Shane Mauldin had a 41-yard touchdown run last Saturday as Baldwin closed out the season with a win over Roslyn to finish 4-4.
Eric Dunetz/Herald
By Tony Bellissimo

Alternating wins and losses over the eight-game regular season wasn’t enough for Baldwin to punch a ticket to the Nassau Conference II football playoffs in its first season under head coach Frank Chimienti.
Despite blowing out Roslyn in last Saturday’s finale, 37-18, the Bruins (4-4) fell just short of snagging the conference’s final playoff berth, which went to Elmont by the slim margin of 1.04 power rating points.
“It hurts collecting all the equipment,” Baldwin head coach Frank Chimienti said. “We were the 9-seed and knew going into the season based on where we were seeded, we most likely had to beat someone ranked ahead of us to make the playoffs. In the end, every team that got in [the playoffs] was seeded above us.”
All of the Bruins’ points in the finale came in the first half and allowed Chimienti to get everyone on the roster playing time. Junior Anthony Byron, who emerged as their feature back this fall and was also the second-leading tackler on defense, had touchdown runs of 32, 7 and 31 yards.
“He’s only 145 pounds but he’s an intelligent kid and a great leader,” Chimienti said of Byron. “He’s an elusive runner and just finds the ball on defense and makes stops.”


Baldwin scored twice in 40 seconds to lead 16-0 after the first quarter. Senior linebacker Cadeem Ramsay, who only began playing football in the spring, was credited with a safety to make it 9-0. Then, following a free kick back to the Bruins, sophomore tailback Shane Mauldin raced 41 yards for a touchdown.
Byron had two touchdowns in the second quarter and sophomore Eugene Brown added another just before halftime. Kicker Leonidis Tobar went 5-for-5 on extra-point tries. Roslyn scored 18 unanswered points to make the final respectable.
“We went into the day knowing we needed some help to sneak into the playoffs,” Chimienti noted. “Long Beach needed to lose, and there was another scenario where we needed two things to happen but only one did.
“We just have to get started on our strength and conditioning work and come back ready to go in August,” he added. “In all of my years coaching high school football, this is the youngest team I’ve worked with. There’s a lot of potential and it looks like we’re going back to Conference I next year.”
Baldwin won all of its even-week games while losing all of its odd-week games. In addition to topping Roslyn, the Bruins handled Glen Cove, Sewanhaka and Calhoun. Their closest contest of the campaign, win or lose, was a 13-6 victory at Calhoun on Oct. 16. They trailed at halftime before Ramsay’s 20-yard touchdown reception from senior quarterback Zach Kirschner and Cedric Jean-Pierre’s extra point put them ahead for good in the third quarter. Byron had a fourth-quarter touchdown run. Junior Kwasi Bonsu and sophomore Rodney Mills led the best defensive effort of the campaign.