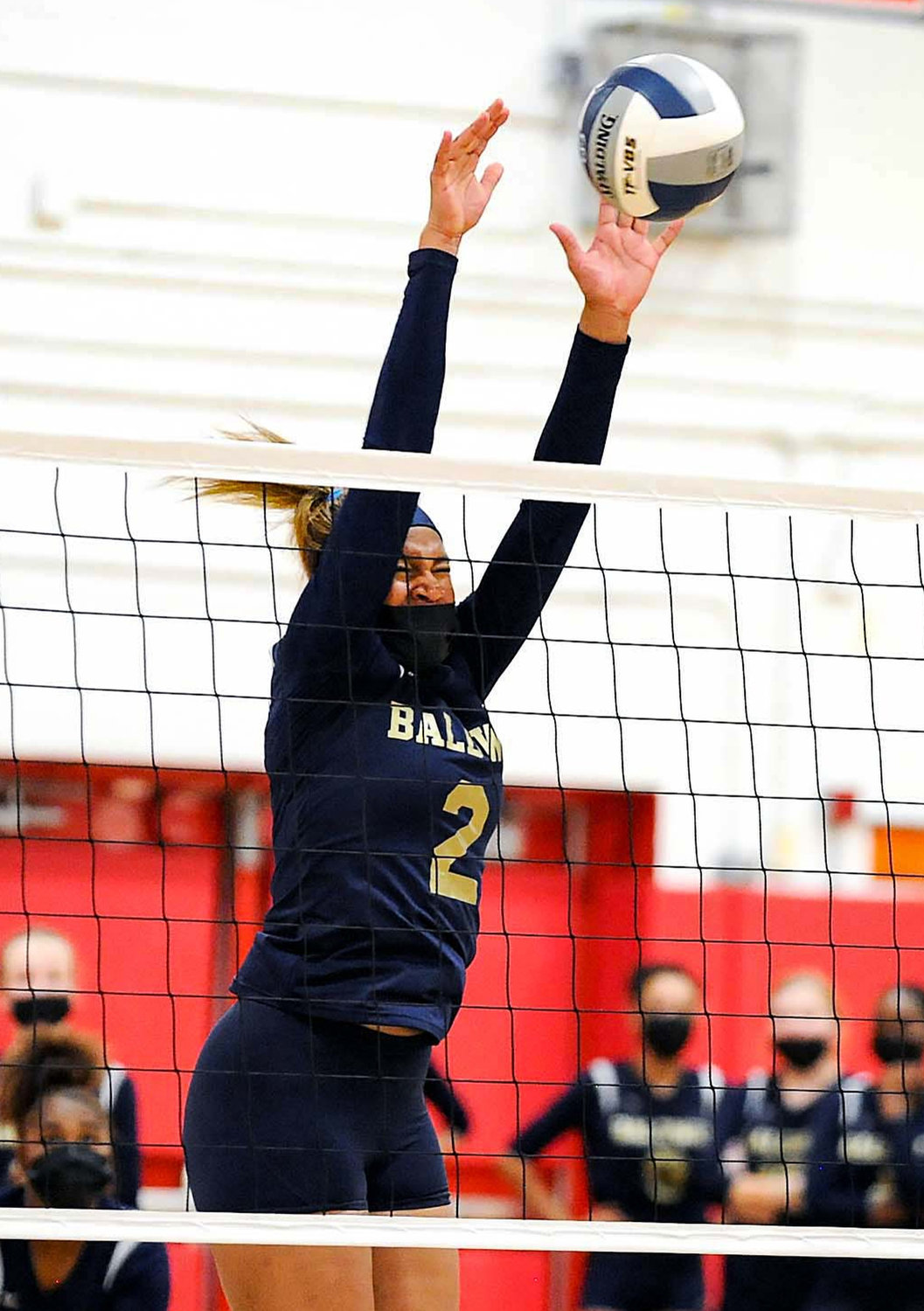 Baldwin's Dally Moreno soared well above the net to provide a block during its hard-fought, four-set defeat at Wheatley on Sept. 14.
Anthony Hughes/Herald
By Brian Kacharaba

The Baldwin girls’ volleyball team is finally in the win column.

Kirsten Mahler had 11 kills and a season-high 25 assists and Sianni Reyes added nine kills as the Bruins posted their first victory of the season with a straight-sets win over conference foe Port Washington last Friday.

Mahler, who is normally the starting setter, saw some time up front and took full advantage of the opportunity while being set up mostly by fellow senior Emma Deguzman-Heurer. The combination helped Baldwin end a season-opening four-game losing streak and a seven-game slump that dated to the spring season.

The Bruins led by as many as six points in the first set, but allowed Port Washington to rally in the latter stages of the session before recovering for a 25-23 victory. Baldwin cruised from there, dominating the Vikings 25-6 in the second set before closing the match with a 25-19 triumph.

“They needed a little bit of a boost,” Bruins coach April Mosca said. “It’s been a rough road.”

The Bruins’ improved serving and the front line find holes in the Port Washington defense led to the long scoring runs in the second set.

“It was the best we played as far as the service goes,” Mosca said. “And [the Vikings] didn’t really have a block so it was like hitting into an open end.”

By the end, Mosca played her entire roster and rotated the girls at different positions to help them gain valuable experience as the season progresses.

Baldwin’s season got off to a rocky start after collecting just 22 points total in a straight set loss at Massapequa on Sept. 11, but showed steady improvement as the campaign progressed despite being on the losing end. The Bruins collected their first set victory against Wheatley four days later and averaged 18 points a set against Syosset, the team that has constantly knocked them out of the playoffs in recent seasons.

“We’ve been hanging with teams pretty well, we just haven’t been able to finish,” Mosca said. “We’re getting a little bit too comfortable or content and the other team is just slowly poking away at us.”

If the season does turn around for the Bruins, they could point to their match against Plainview on Sept. 21 as the turning point. Baldwin fell behind two sets to none and were on the verge of getting swept for the third time this season, but the girls battled back in front of the home crowd and won the next two sets 25-20 and 25-23 before falling short 25-18 in the fifth and deciding game.

“We were playing not to lose instead of getting out there and playing to win,” Mosca said of the slow start that day. “I just told them to play hard and show them all of the work we’ve done at practice and let’s have some fun. They kind of relaxed and played a little harder.”