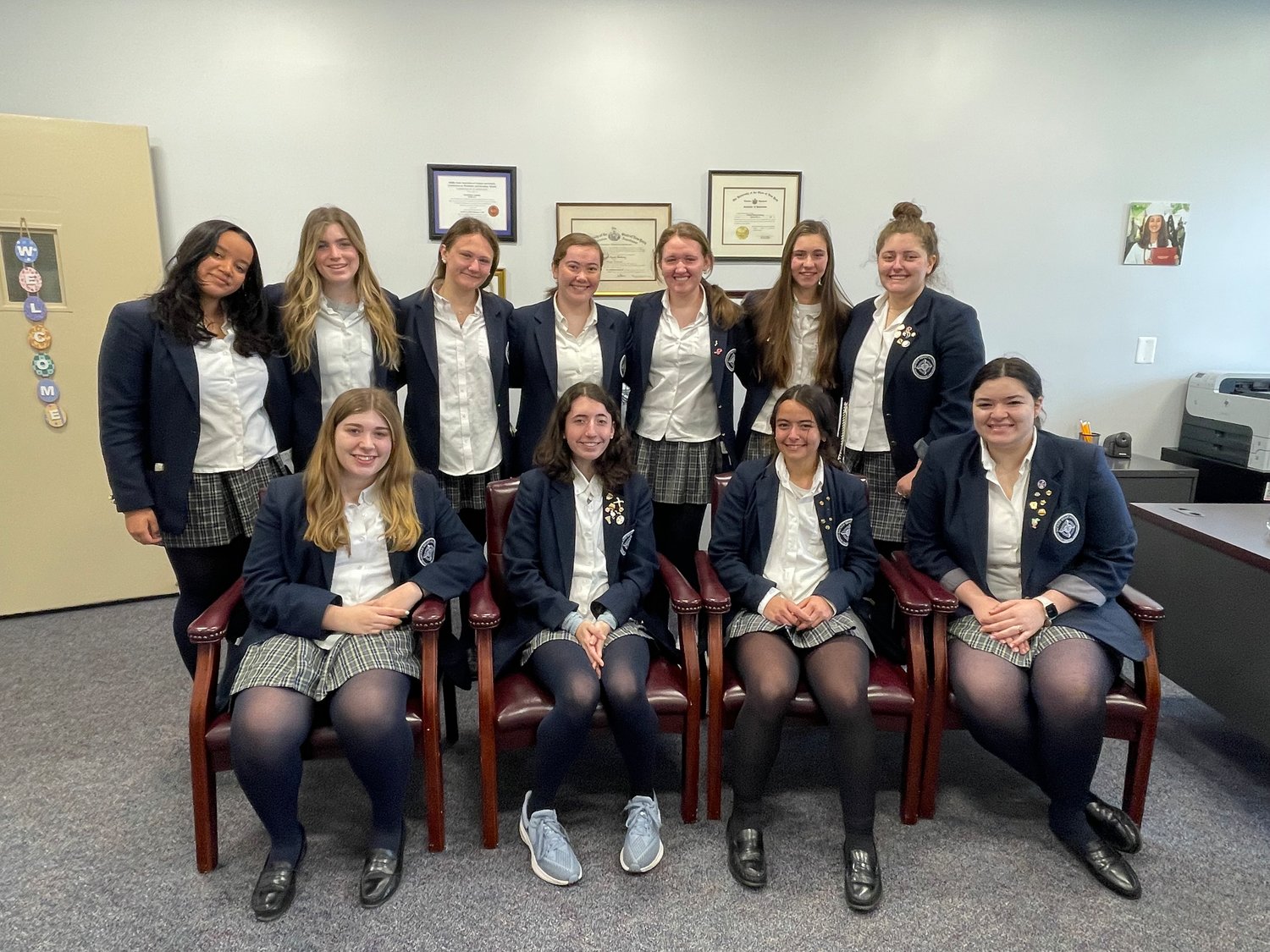 11 of the 13 girls invited to present original behavioral research at the Association for Psychological Science Convention in Chicago May 26-28.
Sacred Heart Academy 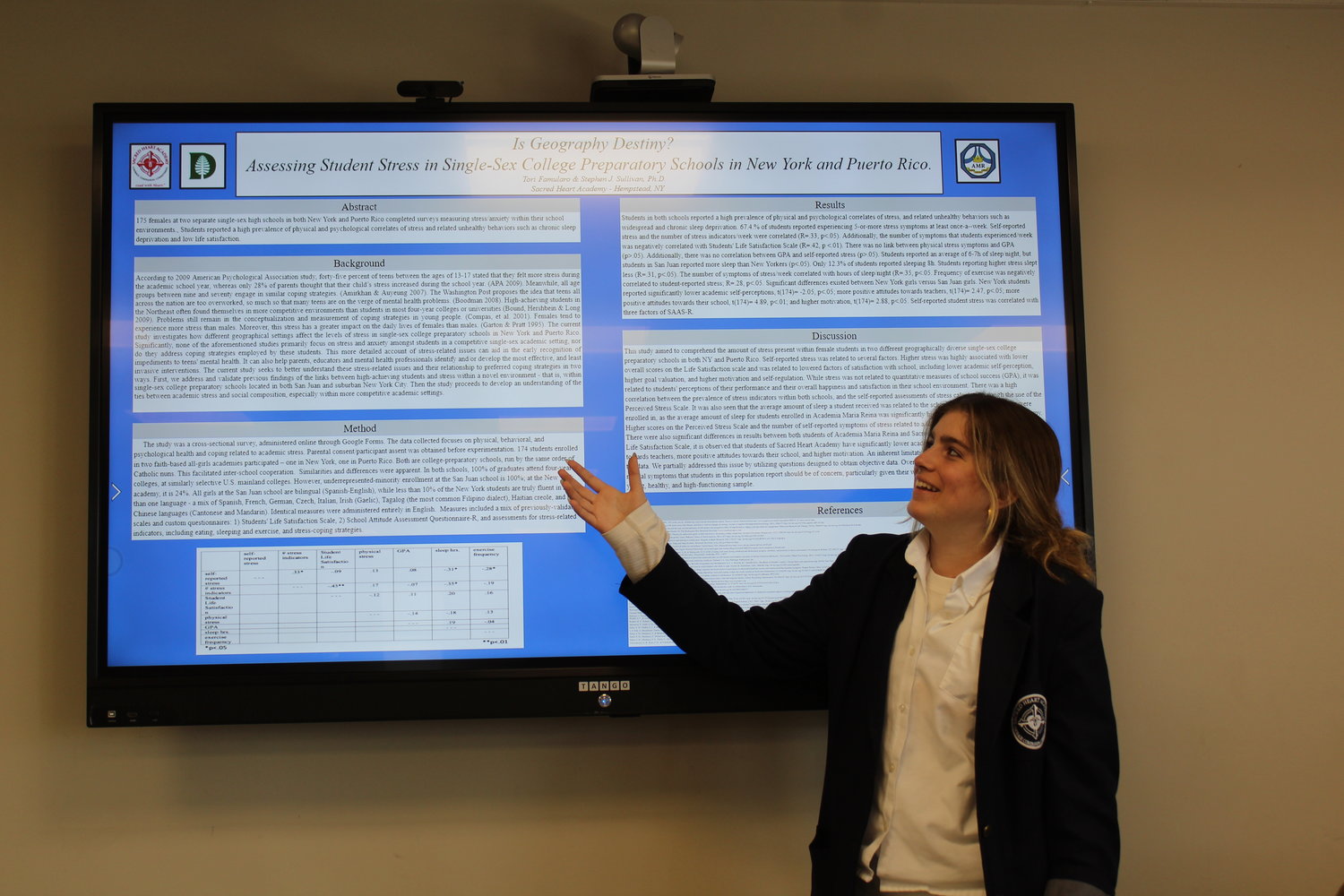 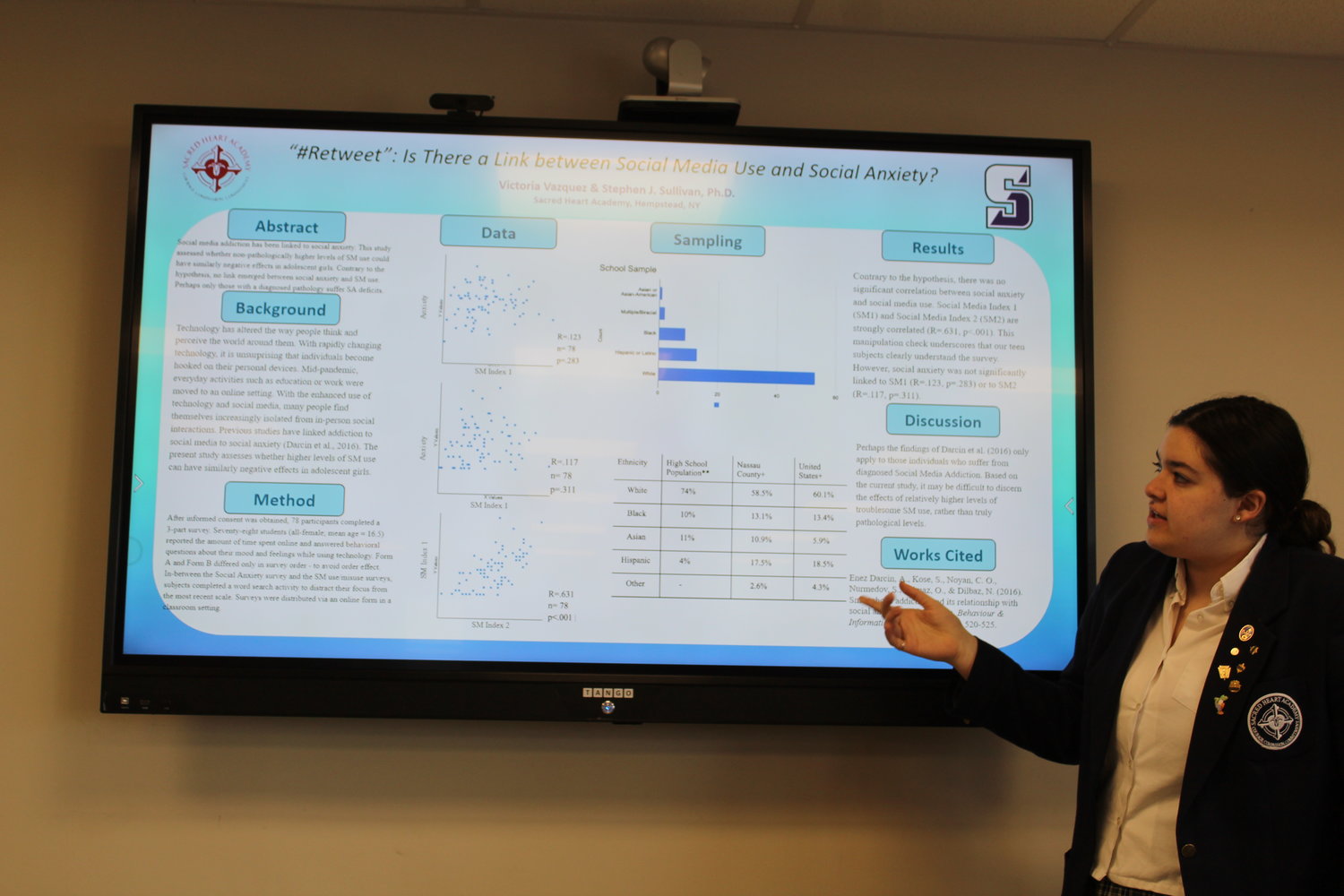 Victoria Vazquez explains her research into social media use and anxiety, called “#Retweet”: Is There a Link between Social Media Use and Social Anxiety?”
Karina Kovac/ Herald
Previous Next
By Karina Kovac

At Sacred Heart Academy in Hempstead two Baldwin high schoolers, Tori Famularo and Victoria Vazquez are researching behavioral science through socially conscious projects that will be on display at the Association for Psychological Science (APS) Convention in Chicago, Illinois on May 26 to 28. Famularo’s study was titled, “The Kids Are *Not* Alright: Assessing Student Stress in Single-Sex College Preparatory Schools in New York & Puerto Rico” and Vazquez, “#Retweet”: Is There a Link between Social Media Use and Social Anxiety?” respectfully. Famularo is expected to attend Dartmouth College in the fall and Vazquez the University of Scranton.

Famularo chose her topic while thinking about other student experiences across the world that could’ve happened to her if she wasn’t born in the geographical location she was. Being of Puerto Rican decent but raised in Baldwin, this was especially special to her saying, “I actually partnered with our sister school Maria Reina in Puerto Rico, which was really nice, because I’m Puerto Rican, so I was able to really embrace my culture.”

After surveying the results were in and it was found that in both schools there was a high prevalence of physical and psychological stress and related unhealthy behaviors associated with that stress, such as 67.4 percent reporting chronic sleep deprivation. Even more interesting, Famularo discovered there to be no correlation between having physical stress symptoms and calculated grade point average.

Vazquez, Famularo’s classmate and fellow researcher picked an equally important topic of research, asking if social media addition and use is linked to social anxiety. Sending out a 3-part survey to 78 participants Vazquez found out the unexpected, seeing no significant correlation between social anxiety and social media use.

The topic, however, is timely as increases in suicide rates, especially among young girls can be seen across the youth of today. Emergency room visits for suspected suicide attempts among girls between the ages of 12 and 17 increased by 26 percent during the summer 2020 and by 50 percent during winter 2021, compared with the same periods in 2019, researchers from the U.S. Centers for Disease Control and Prevention found.

Principal of Sacred Heart Academy Jean Amore stopped into the classroom during presentations and was amazed by the work the teenagers are producing, “They work well doing research and they work very well under the metric of Dr. Sullivan who coached them, I like the topics they chose, and they also have a moral compass to them too which is nice because their research reflects their personal and their professional interests, but also about what they’re concerned about today as witnesses to the world.”

The APS started in 1988 with 400 dedicated psychological scientists and a mission to restore the public image of psychology as a science. Today, APS has an international membership and continues to combine traditional scientific values of rigor and transparency with innovative methods and practices in the conduct and application of research.

The APS Convention hosts more than 4,200 psychological scientists and students annually, and more than 2,500 at its biennial International Convention of Psychological Science. And, throughout the year, APS shares it’s science in six of the most influential journals in the field. APS is also committed to the training and support of a new generation of psychological scientists and the engagement of the scientific community with cutting-edge tools and techniques.