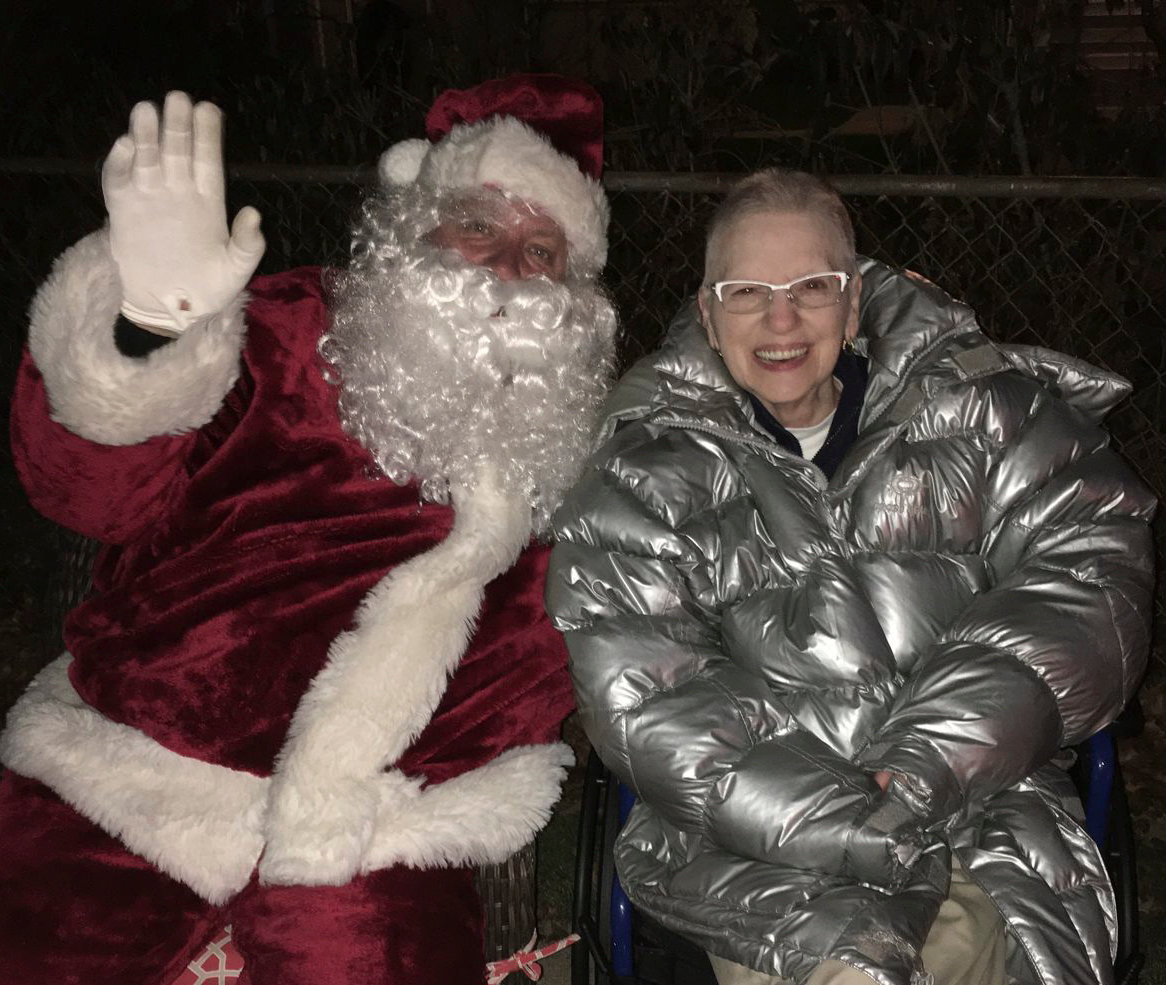 The late Joan Giles, Katherine Blazdell’s mother, took a photo in front of her lit 85-foot tree with a member of the fire department dressed as Santa on their Santa route during the holidays in previous years.
Photos Couresty of Katherine Blazdell 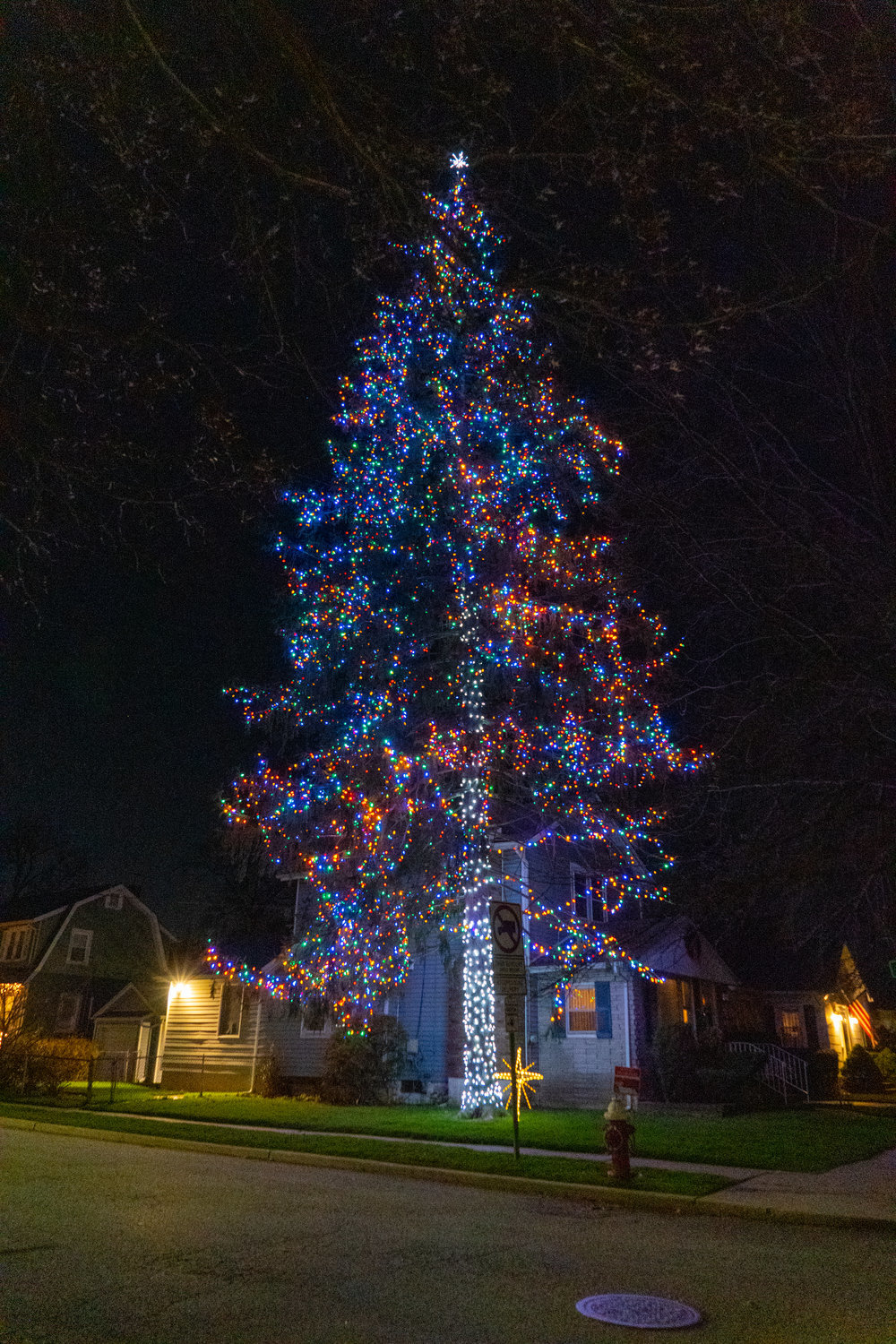 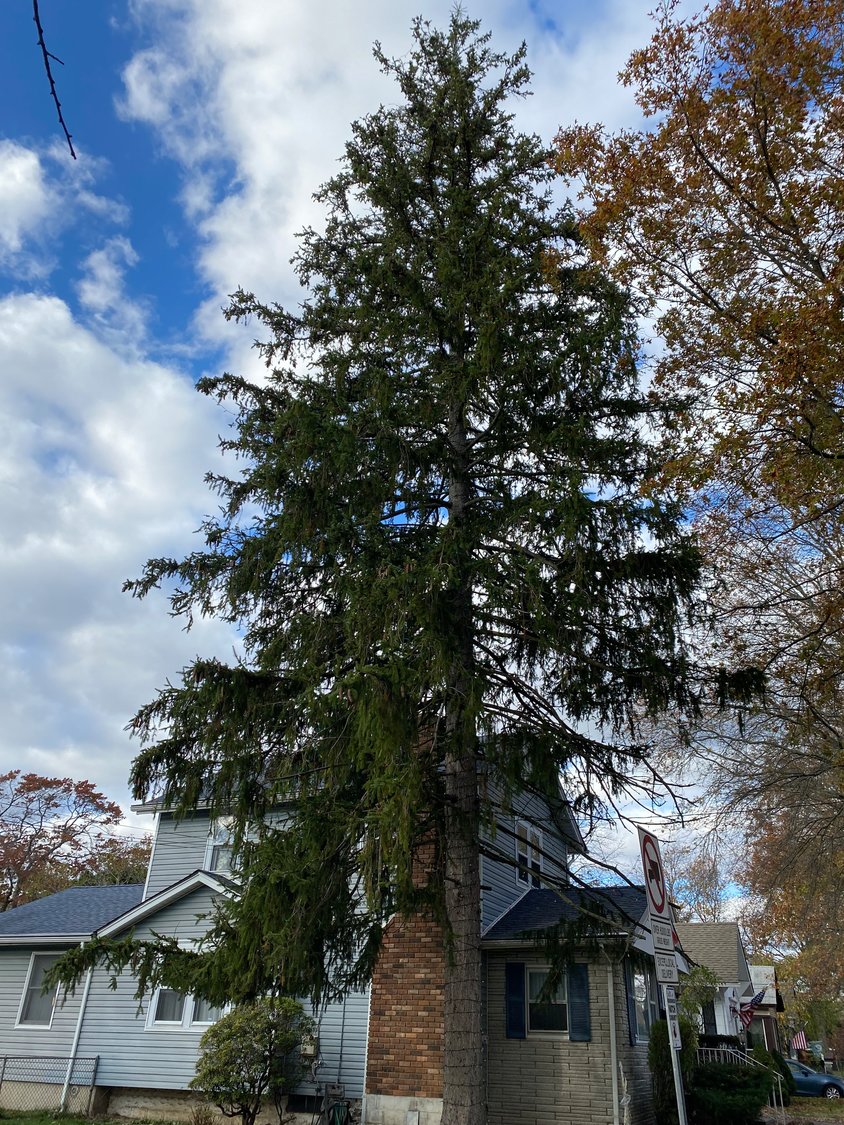 The tree is now deocartaed with lights and will turn on after Thanksgiving.
Andre Silva/Herald
Previous Next

Now were trying to keep the tree lit to honor both of those memories.”
Katherine Blazdell, the daughter of the late Joan and John “Bud” Giles of Baldwin and sister to Elizabeth Giles
By Andre Silva

Katherine Blazdell, a Baldwin resident, is trying to keep her parents tradition alive, but needs help.

Blazdell, the daughter of Joan and John “Bud” Giles of Baldwin and sister to Elizabeth Giles, is one of the owners of one of the largest trees strung with Christmas lights each year in Baldwin. Blazdell said her tree, located on the corner of Irving Place and Harte Street, draws attention each year from neighbors who like to drive by and pose for pictures when the lights turn on in late November each year.

Blazdell said the tradition of lighting the tree started in 1971 when her father Nathaniel Giles passed away. At the time she was 20 years old, her sister 16, and the tree was 65 feet tall. She said her father her father John Giles was inspired to light the tree as grand as Rockefeller Center Tree in Manhattan, but never had the means to do so, when he passed away they started the tradition in his honor.

Since then she and her mother, Joan Giles, continued the tradition by hiring the local Pacific Lawn and Sprinklers, a chain sprinkler, irrigation, and installation services company, to decorate the tree with lights in honor of her father, John Giles.

Blazdell’s mother passed away on Aug. 13, 2021 and since then Blazdell is struggling to raise enough money to decorate, and maintain the lights on the tree without support for the community. She said she organized a Go-Fund-Me campaign to raise approximately $7,000 to ensure the maintenance and aesthetic of the tree stays in tact until after December. To donate go to TinyUrl.com/pbts2k2n.

“Now we’re trying to keep the tree lit to honor both of their memories,” said Blazdell.

Blazdell said technicians from Pacific Lawn and Sprinklers would check the tree again for any damages by wildlife and weather and light the tree after thanksgiving.

“My mother insisted the lights do not get lit until after Thanksgiving,” said Blazdell.

Although the tradition started to honor her father, Blazdell said the community truly liked the tradition and engaged with it by stopping for pictures. She said for the past two years their house was included in the Baldwin Fire Department’s Santa route, where members of the fire department dress up as Santa and drive around town for the holidays.

Blazdell said the tree is so tall, the tree’s tip can be seen from the upper platforms of the Baldwin Long Island Rail Road train station.

Castro Walters, a neighbor from Baldwin, said many neighbors would stop by the tree to enjoy the lights and take pictures. He said people come from all over town to see the lights during the winter season.

“People come out and play Christmas music, people hand out candy, and sometimes there’s a little parade where they feature Santa,” said Walters.