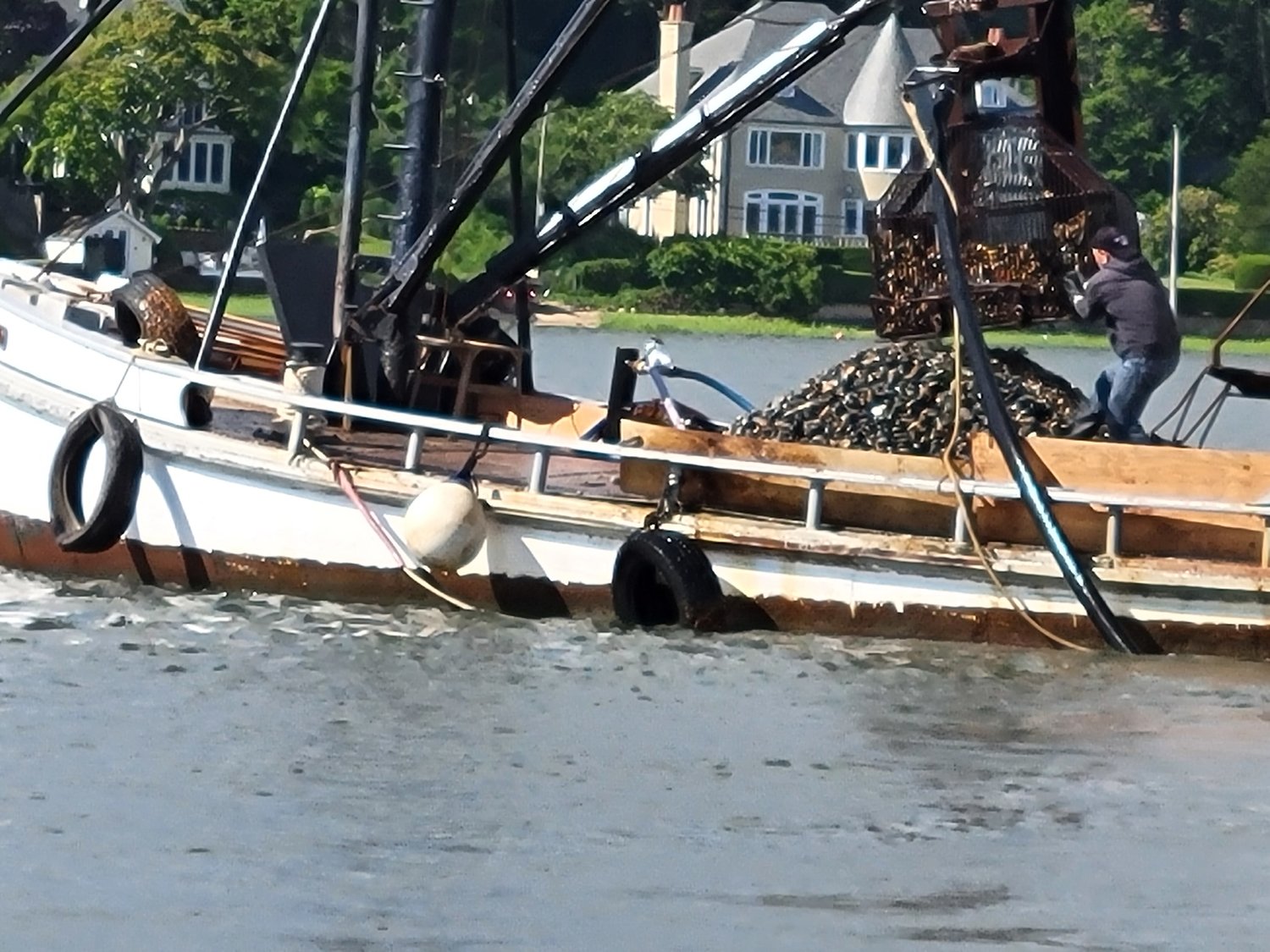 Frank M. Flower & Sons is hydraulically dredging Mill Neck Creek for clams, which the Town of Oyster Bay has been trying to stop the company from doing, because officials fear that it will destroy an important area for spawning.
Courtesy Bill Fetzer

I believe what Flower is doing is like pulling the last straw in the camel’s back.”
Bill Painter, President, NOBBA
By Laura Lane

Frank M. Flower & Sons began hydraulically dredging Mill Neck Creek on June 23, transplanting clams from an area it leases to another part of Oyster Bay with an employee of the Department of Environmental Conservation aboard to monitor the operation. The purpose is to eventually harvest the clams and sell them.
The Town of Oyster Bay, Friends of the Bay and the North Oyster Bay Baymen’s Association oppose the operation, claiming that Flower will destroy an important spawning area for clams.
Friends of the Bay, a nonprofit whose mission is to preserve and restore the Oyster Bay/Cold Spring Harbor Estuary and the surrounding watershed, faults the transplanting because, it wrote in a Facebook post, that it sees the creek as an important “source of natural clam propagation which serves as a de facto shellfish sanctuary.”
“The creek is uncertified for shellfish harvesting because of pollution,” the post continued, “but if the company can transplant them under a permit already granted by the NYS Department of Environmental Conservation, they will cleanse themselves and can be sold.”
Baymen’s Association President Bill Painter said that Flower has already stripped the bay of clams, and that dredging the creek will make matters worse.


“I believe what Flower is doing is like pulling the last straw in the camel’s back,” Painter said. “State law says that a natural resource belongs to the state. You can’t take what isn’t yours.”
James Cammarata, Flower’s attorney, said the DEC granted a transplant permit to Flower 40 years ago. “The operation is happening on a very small portion of ground my client leased for many years, to be transferred to another part of the bay,” Cammarata said. “The product belongs to them. The creek is not being damaged by Flower.”
Bill Fetzer, a bayman from Bayville, said he was out on the water on June 23 and saw Flower’s operation firsthand. “They’re out to take every clam they can out of this harbor until they destroy it,” Fetzer, a member of NOBBA, said. “This is Long Island Oyster Farm all over again from 20 years ago, that happened in Huntington. They left after they destroyed everything.”
The Town of Oyster Bay shares FOB’s and NOBBA’s concerns that the dredging operation in the creek will permanently damage a healthy spawning area for clams, in an estuary where Flower once operated a hatchery, which it closed two years ago. The town has been trying to stop the operation, filing for a temporary restraining order on May 23, which was denied nine days later by a state judge.
Flower waited until June to resume its transplanting operation, agreeing to the judge’s request to negotiate with the town. “We had certain talks with the town,” Cammarata confirmed, “but the issue is, transplanting has to be done when the water temperature window is above 55 degrees, which is now until the end of August. So Flower had to begin the process now.”
Gov. Kathy Hochul weighed in, supporting Flower, saying that since dredging has been done for years in Oyster Bay, it should be able to continue.
Bill Bleyer, president of FOB, said the organization is disappointed that Flower decided to start transplanting without seeing if it could negotiate a settlement with the town. “We are concerned that even if they do reach a settlement,” Bleyer said, “by the time they get there, a lot or all of the clams will be relocated, making the whole thing moot.”
Neither Cammarata nor town spokeswoman Marta Kane would confirm whether the parties were continuing to negotiate.
“The town . . . believes that the state made a poor decision in allowing this hydraulic dredging to take place in once-protected waters,” Kane wrote in an email. “We will continue to pursue legal action to protect our harbor and marine life.”
If all else fails, a trial could move forward, but in the meantime, Flower can continue to hydraulically dredging the creek.
Cammarata said that a third set of papers is due in court in July. He did not offer any details.
The state DEC would not comment, citing the pending litigation.
“We talked to the DEC,” Fetzer said, referring to the DEC employee who was on Flower’s boat while the dredging was taking place. “He said he was just doing what he was told.”
By early afternoon on June 23, Fetzer said, Flower had removed 10 bushels of clams from the creek.
Responding to accusations that the company is also taking juvenile fish and clams, Cammarata said that hydraulic dredging equipment doesn’t allow undersized clams to be harvested. “We also aren’t taking the large clams that are major producers of seed clams,” he said. “They throw them back into the water.”
The town also filed for a preliminary injunction that would have prevented the operation from continuing, but it was denied on Monday.
Painter said that he and other baymen have been forced to clam in the Long Island Sound, which is dangerous. “The Sound is like a new game, not like digging in Oyster Bay,” Painter said. “We have to deal with huge boats going at high speeds that leave huge waves. Everyone has left Oyster Bay. They’ve moved their boats to Sea Cliff.”
The body of bayman Tony Capozzoli, the apparent victim of an accident, was found floating in the Sound off Matinecock on June 23. Another bayman, Doug Rodgers, attributed Capozzoli’s death to the danger where he was clamming.
“The reason why guys work out there is because there are no clams in Oyster Bay,” Rodgers said. “In Oyster Bay and Cold Spring Harbor, you can duck out of the wind so the waves aren’t as big. Not in the Sound. The dangerous job is getting more dangerous out there.”
Report an inappropriate comment