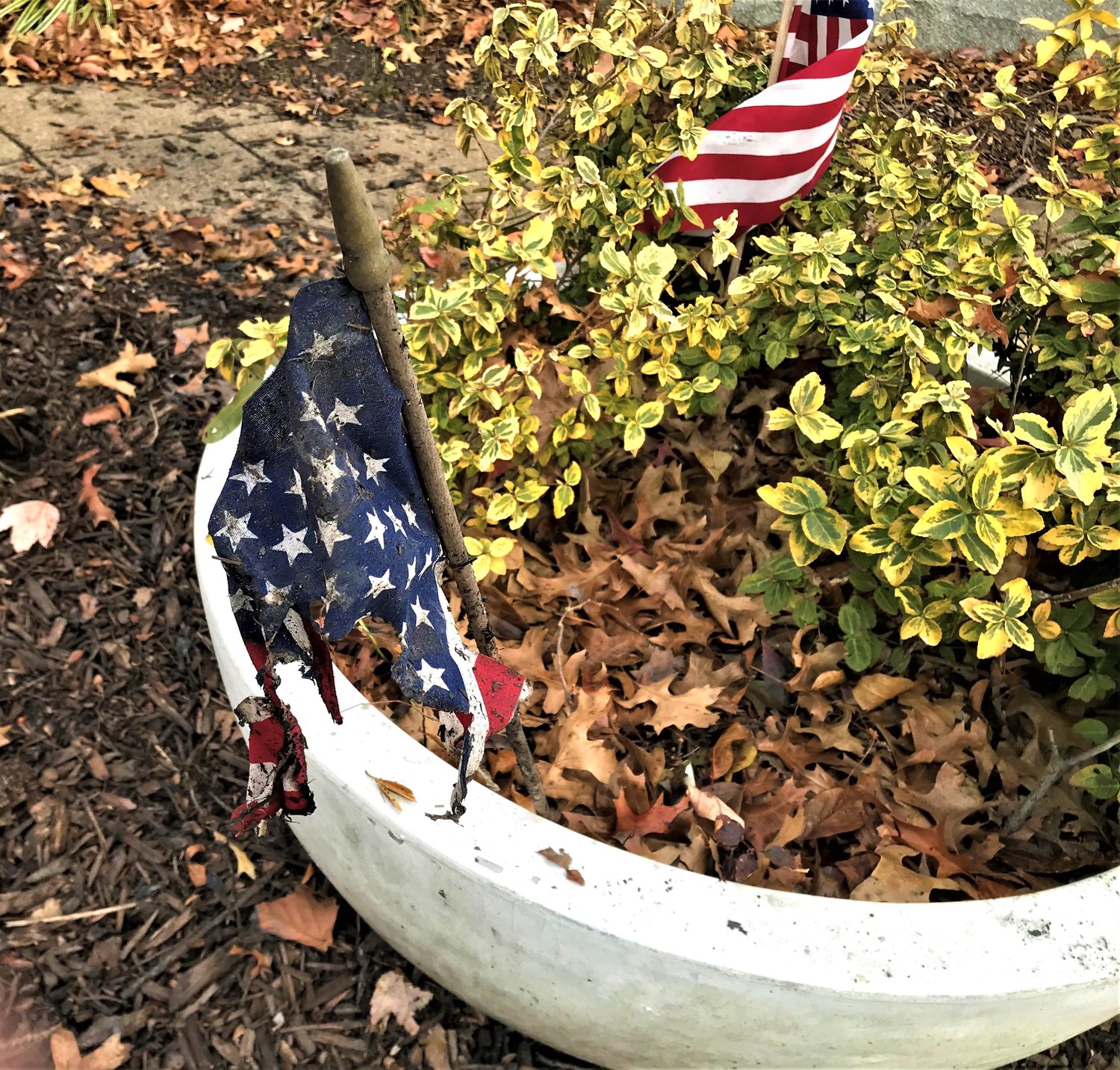 - Plaques for those killed in World War II, Korea, and Vietnam

- Plaque for those in the Armed Forces in the Persian Gulf

- Monument for those who died in World War II

- Wall with more than 2,200 names of those who perished in World War II

Sanitary District No. 2 Commissioner Jerry Brown, 69, who is also a volunteer firefighter in Baldwin, said there was light scorch damage to part of the memorial, and a small American flag was burned in front of the main war monument honoring World War II veterans.

“Our Heroes’ monuments from Baldwin's past warriors [were] found in deplorable condition, vandalized and seemingly forgotten,” Brown said in a Dec. 3 news release about the incident.

The Fire Department called the Nassau County Police Department’s 1st Precinct, which sent officers to interview a man in his 60s whom a storeowner saw fleeing the area. Police held him for questioning, but released him.

County Legislator Debra Mulé, a Democrat from Freeport, surveyed the damage the day of the incident, and told fire and sanitation officials that she would prioritize cleanup of the area.

“This incident is particularly disturbing and offensive,” she told the Herald, “because the target was a hallowed space in our community where we honor those brave Baldwin residents who served in America’s armed forces.”

The Baldwin Civic Association is also concerned about recent vandalism in the area. President Darien Ward said, “Only the Baldwin community can monitor and maintain our quality of life by holding ourselves and neighbors and visitors accountable.”

In June 2020, Sanitation District No. 2 posted on social media about the same issues, but also a lack of maintenance and upkeep, with knee-high grass around the memorial, noting, “Weeds surround John J. Kedenburg’s memorial for his bravery and sacrifice in Vietnam where he was awarded our nation’s highest award, the Medal of Honor, posthumously.”

Sanitation district workers have routinely cleaned up the site, and district officials said they plan to continue assigning workers to address incidents in the area, even though the district is technically a Town of Hempstead entity and Silver Lake Park is a county park.

The county has also responded with workers, but only after specific incidents, despite calls for continued upkeep.

Last year, a bench that was destroyed by a fire near the memorial could not be salvaged, so the debris was cleared; however, it has yet to be replaced, despite Sanitation District No. 2’s outreach to the county.

Besides scheduled maintenance, sanitation officials have asked in recent years that the county also install additional lighting and increase police presence at Silver Lake Park. Brown told the Herald, “Once [incoming County Executive Bruce Blakeman] gets the team together, we want to be the first in line.”

The state of Silver Lake Park, however, has slowly improved over the years because of local, county and state efforts. The $1.75 million Silver Lake Park Drainage Project to prevent flooding and increase the park’s aesthetics and environmental sustainability is to be completed in 2022.

Brown, a Baldwin High School class of 1970 graduate, said, “Everybody remembers meeting around memorial — people getting married, children feeding the ducks — as a rite of passage, so it’s everybody’s job to look after the park . . . We want to keep it for future generations.”

Sanitation officials ask that people call (516) 223-3207 if they see anything amiss at Silver Lake Park.