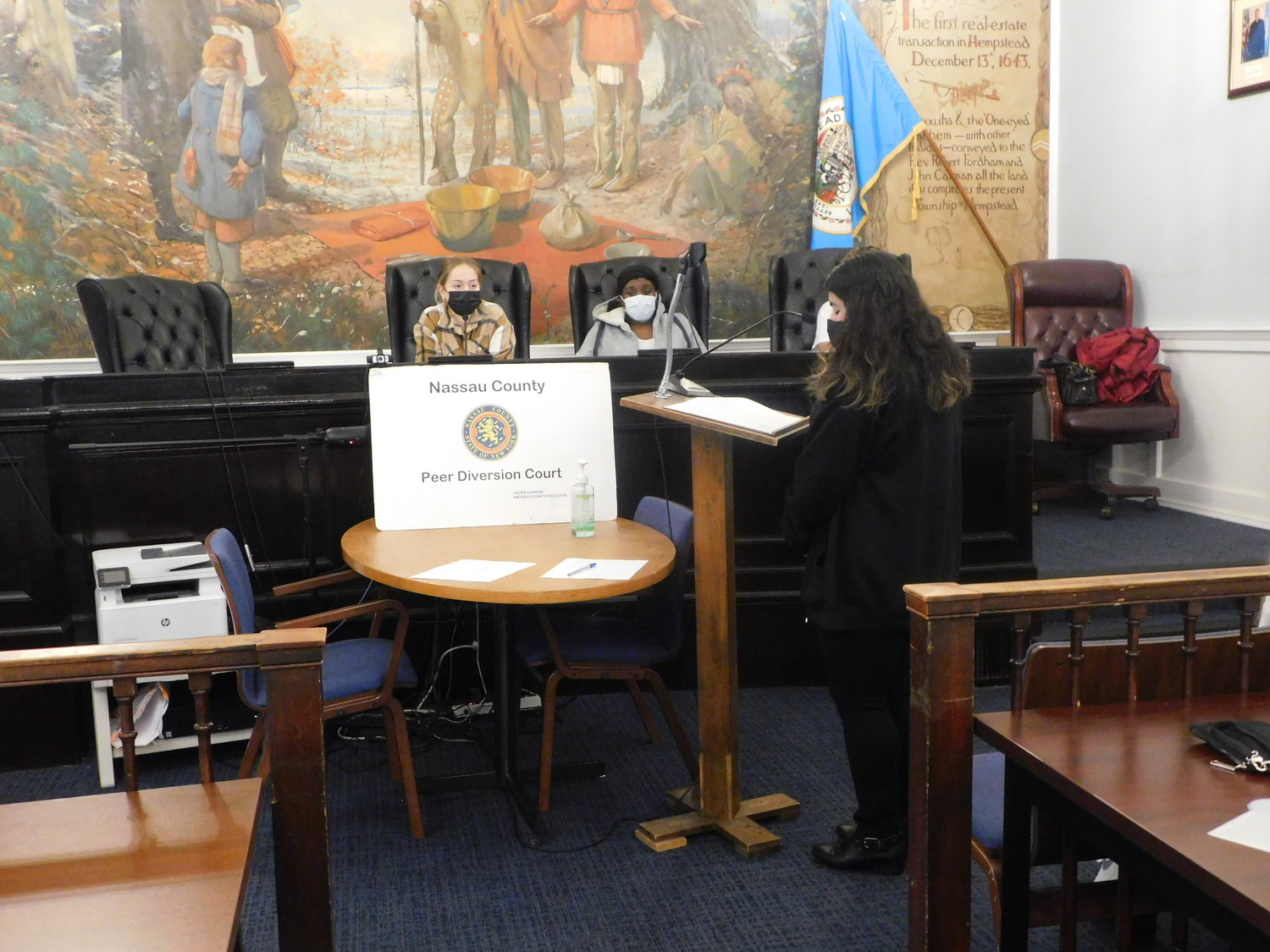 Glendy Hernandez, 15, a sophomore at Hempstead High School, presented the opening argument for the defense at a Peer Diversion Court session on December 30, 2021.
Reine Bethany/Herald 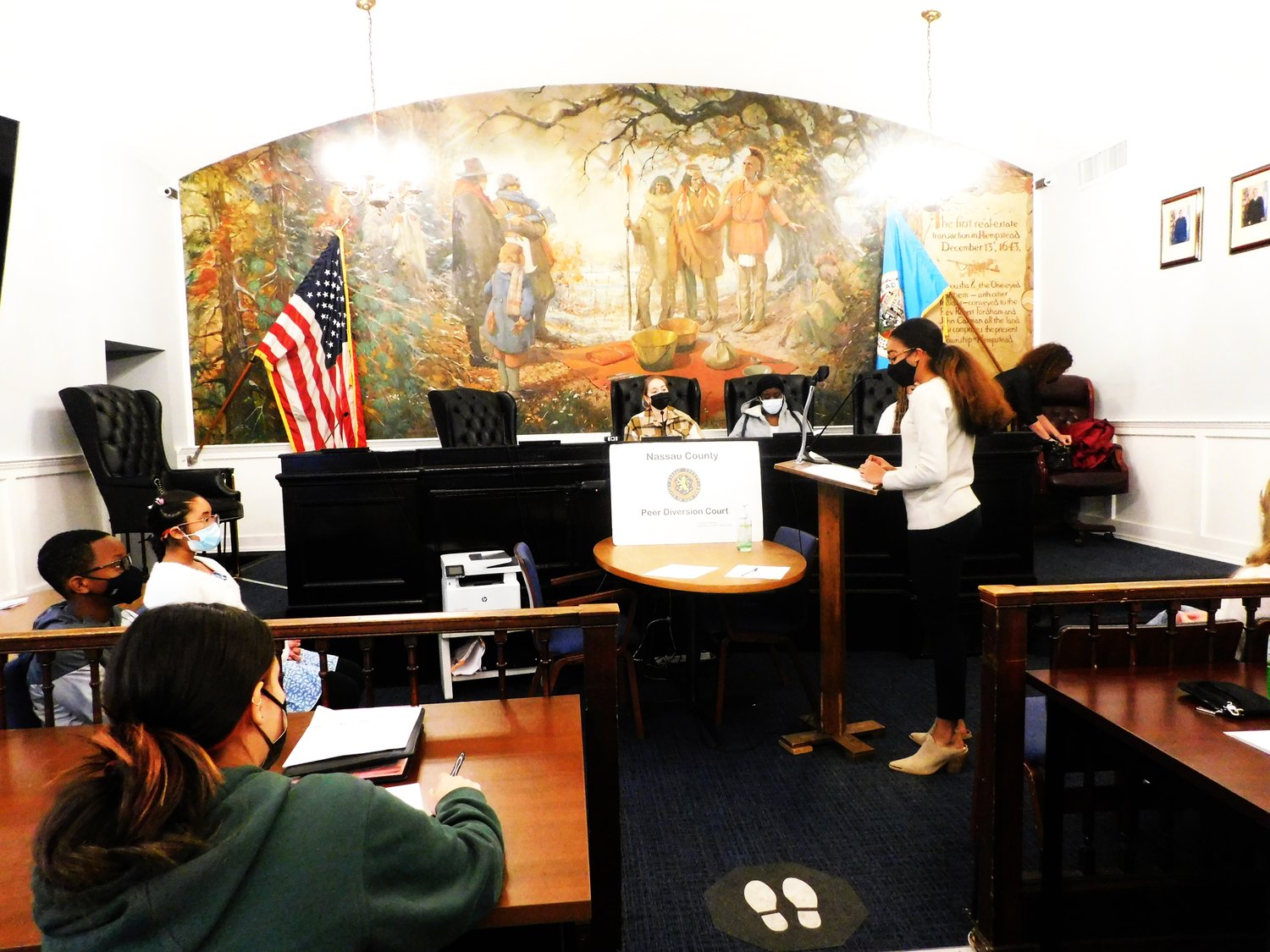 “The program is for the respondents to know that they can move forward and not have this once-in-a-lifetime mistake hold them back from finding who they truly are,” Jasmin said. As the same time, he describes his role as “father-uncle-grandfather, where I really hold their feet to the fire, to really see the full consequence of their actions.” He helps them to see, for example, that a teen who shoplifts, or steals from an employer, may cause the employer to hesitate to hire any young person in the future.

“The kids know me as a tough love,” said Jasmin, “but once I’m done doing that, I will whisper in their ears, you don’t ever have to talk about this again. Let’s move forward. I will text them later, or call and say, do you get what I was trying to tell you -- just to reflect on the situation. We do encounter kids that don’t have that person that holds them accountable. … The kids come back to visit, and say, ‘You know, Mr. J, when we met, I hated you. When I left, I loved you.’ It makes me feel good just to realize that they are getting it.”

Sean and Bobby, ages 24 and 17, argued about money in the car. Sean was driving. Their argument intensified. At one point, Sean locked the doors from the driver’s side so Bobby couldn’t leave the car.

Feeling threatened, Bobby punched Sean’s right eye and grabbed the steering wheel to force Sean to pull over. Sean managed to stop the car safely in a parking lot but would not unlock the doors.

Exactly how much Bobby hurt Sean in order to leave the car, and why Bobby then damaged one of the car’s headlights, became matters of lengthy dispute. Sean pressed charges against his friend. Bobby ended up in the juvenile justice system, charged with assault, criminal mischief, and reckless endangerment.

Bobby could have been stuck for life with a juvenile record. However, he agreed to participate in a redemptive, highly successful program called Peer Diversion Court. On a given date, he appeared for the proceeding in the courtroom of Hempstead Village Hall.

Peer Diversion Court started a little over ten years ago at Hempstead High School. At that time, it was meant to be an alternative to suspension. It showed great power to divert youngsters from a path toward trouble back to a path toward a responsible life.

Then-District Attorney Kathleen Rice and her office recognized the program’s potential. She brought in attorney Arianne Reyer to work with Assistant District Attorney Kara Kaplan, who had started the program, to expand it into a county-wide program. It was called Nassau County Youth Court, but in 2018 when the program was in danger of ending due to changes in the law, the county recognized what an important resource it was for young people and made sure it would remain available. The name of the program evolved, and the program went to the Department of Probation, where Reyer is Special Counsel for Adolescents and Juvenile Justice.

The program recognizes that the people best equipped to help struggling teens change direction are other teens.

“What we’ve done,” said Reyer, “is train high school students across the county to take on the traditional roles in a courtroom, because kids tend to listen to other kids more than they listen to grownups.”

Reyer and the Peer Diversion Court Coordinator, educator Michael Jasmin, examine each new case to make sure it is at an appropriate risk level, and then guide the proceeding from start to finish.

When Bobby was arrested, he was given a choice: acknowledge he had done something wrong and start the Peer Diversion Court program, or go through traditional juvenile court proceedings and risk being adjudicated a juvenile delinquent.

He chose Peer Diversion, and thereby became a “respondent” in the program instead of appearing in a traditional court. He would have a voice in his own process of change, encouraged by voices from his own age group.

“When you walk into Peer Diversion Court,” said Reyer, “every person in the court is a young person, a high school student mostly, the lawyers, the bailiff, the clerk, the jury. … It’s really a discussion about the impact of your actions on your parents, your future plans, and the consequences of your decision making.”

The disposition of Bobby’s case would be deliberated, quite literally, by a jury of his peers. A prime aspect of the program is that respondents must serve on future Peer Diversion juries. In doing so, they continue the self-reflection so necessary for personal growth.

Bobby’s case was therefore heard by young people who themselves had once been on a self-destructive path, and who could speak to his situation with empathy born of direct experience.

A day in Peer Diversion Court

On a Thursday afternoon in late December, Hempstead School Administrator Dorian V. Segure sat in the courtroom of Hempstead Village Hall. He was observing two of his seventh-grade students who participate in his law class and in the Law Club that he has led at A.G.B. Schultz Middle School since 1999. This past fall, the Peer Diversion Court began including qualified middle-school students.

“That young lady is Karla Santos, and the young man is Keyondre Francis,” said Segure.

“They are playing jurors today,” said Segure. “Last week, they shadowed as lawyers. The two of them were on the community side, but they observed the entire process. Today they are here just as jurors so they can have that experience.”

Normally, middle-school or high school volunteers don’t serve on the jury, but so many of the scheduled participants had either tested positive for Covid or had a family member test positive that the jury was left short.

“You remember whose courtroom this is,” said Segure. “The Honorable Judge Brianna Vaughan was a seventh and eighth grader in the Law Club at A.G.B. Schutz,, and she’s the youngest village justice ever.” Vaughan was elected Hempstead Village Justice in March 2021, and has strongly supported Hempstead’s youth law programs.

The teens of the court who were inscribing their signatures on the sign-in sheet came from Hempstead, East Meadow, Farmingdale, Westbury, Lindenhurst, and several other places in the county. Grace Kane, 18, this week’s presiding judge, was on break from Binghamton University, and had been an advocate in the program for four years during high school.

The bailiff, Naomi Achonu, named called the proceeding to order. The youthful clerk, Blessing Nwachukwu, administered the oath of confidentiality, binding everyone in the room “not to reveal to anyone what is discussed here in Peer Diversion Court.” Both students were from Baldwin.

So began a lengthy, patient process. Bobby was the sole witness, keeping the focus on what he would learn and how he himself had to change so his life could go forward. At various points, the judge, the bailiff, and the clerk each made statements to Bobby. Every juror, including Karla Santos and Keyondre Francis, posed questions to Bobby concerning his relationship to Sean and clarifying aspects of his story.

For more than two hours, Bobby answered questions. Matters of his home life and his friendship with Sean emerged that helped him understand what had impelled his actions, while the teens surrounding him continually returned to the central question: How could he have chosen differently, not only on that awful day, but in the months leading up to it?

The process empowers respondents to view themselves as people capable of choosing to head off trouble and reach for what is self-building, not self-destructive.

The program’s ongoing success can be measured by its low rate of recidivism – less than 10% -- which can be attributed not only to the hearings and what happens afterward, but by the continuing support from Reyer, Jasmin, and other supportive adults like Hempstead’s Segure.

“Kids get in touch with us from years and years back,” Reyer said. “We’re at case 1000-plus and I’m still in touch with case number 4, who’s 25 years old. Kids send us their college acceptance letters. Our phones blew up at Christmas with kids texting us.”

Perhaps one of the greatest benefits is that respondents who complete the program – which 96% do – now can pay it forward.

“Some of our respondents become the lawyers in our program,” Reyer said. “That’s an amazing opportunity -- for a kid who once found themselves in a real crisis situation to be able to turn to someone who now finds themselves in a similar situation and really be able to walk them through it and say, you know, I’ve sat where you’ve been, I know how challenging this can be and we’re all here to help you and guide you through it.”