Putting the culture in subculture 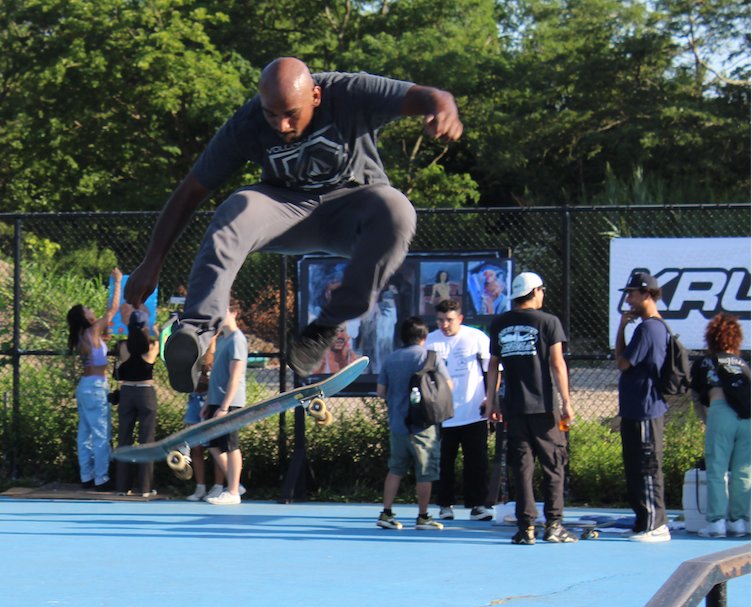 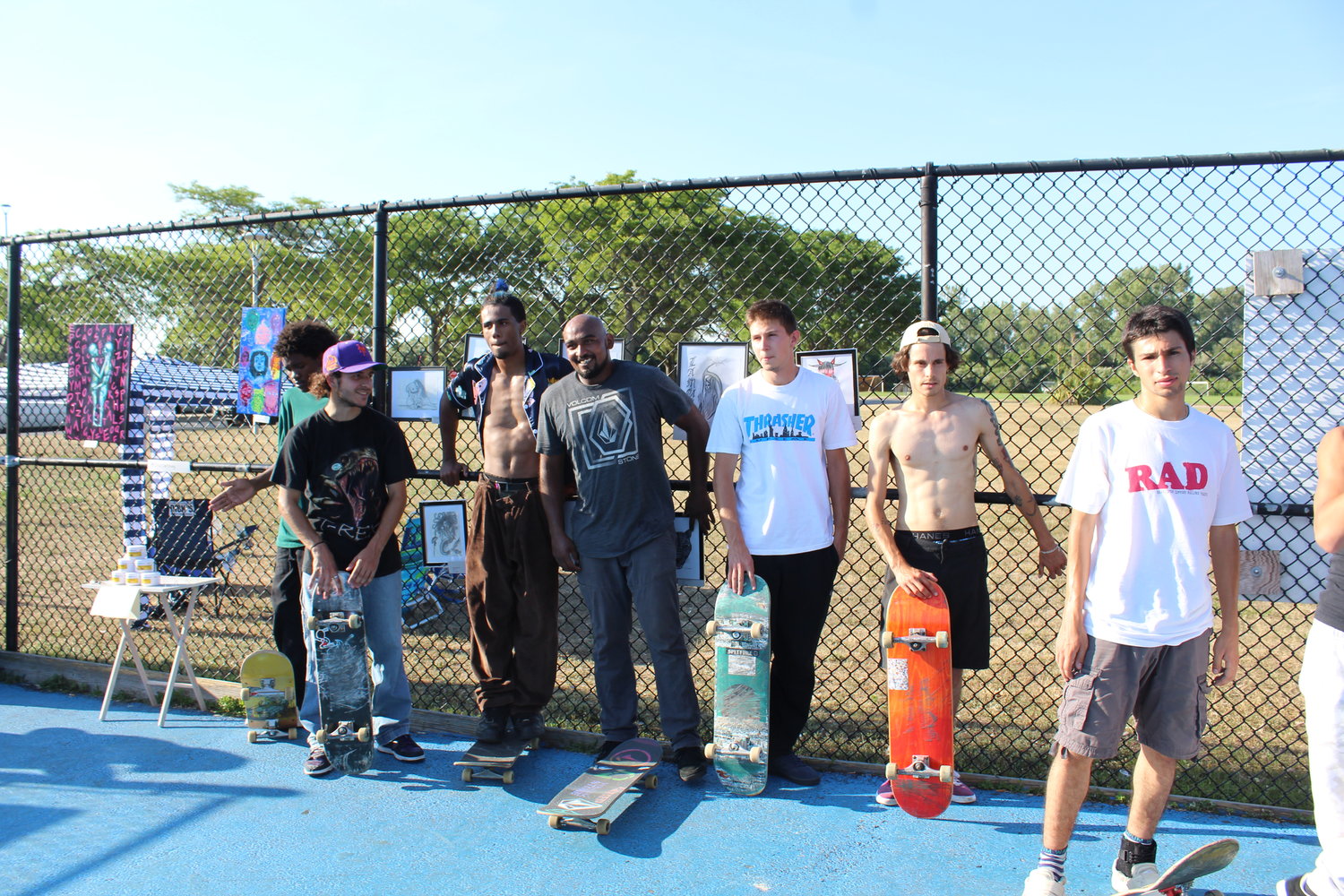 Some of the roughly 50 people who attended the Beyond the Board art show at Baldwin Park last Saturday.
Karina Kovac/ Herald 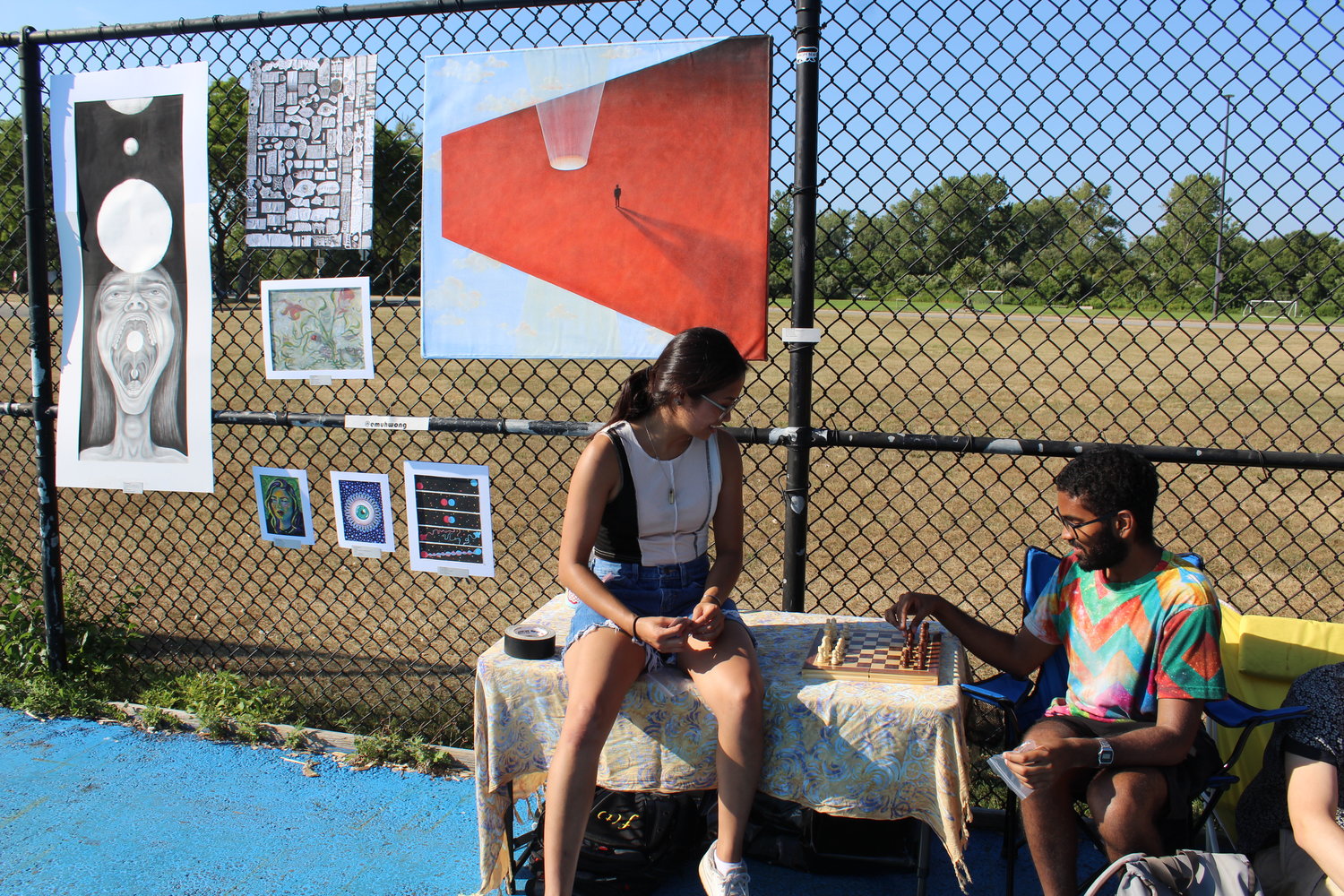 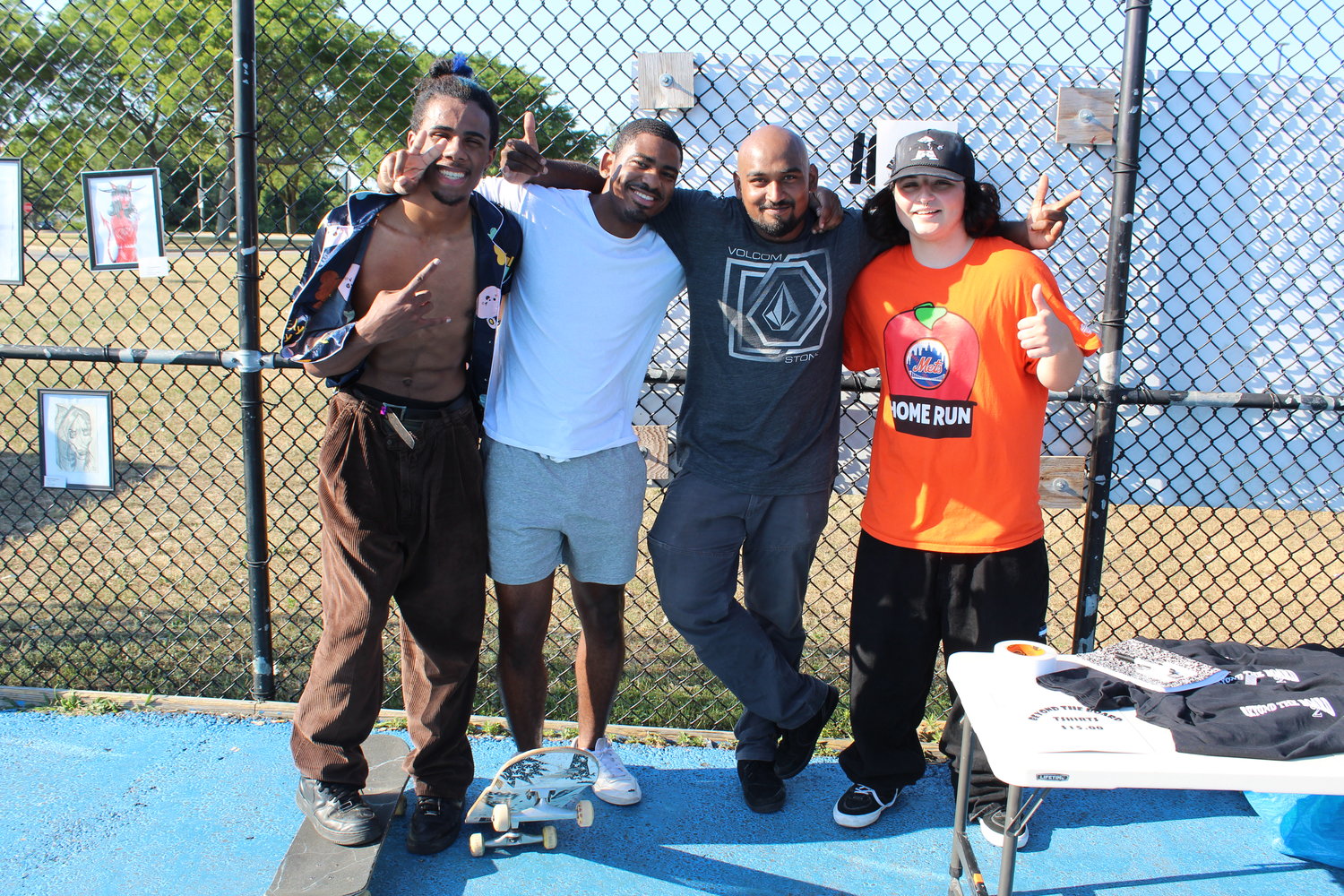 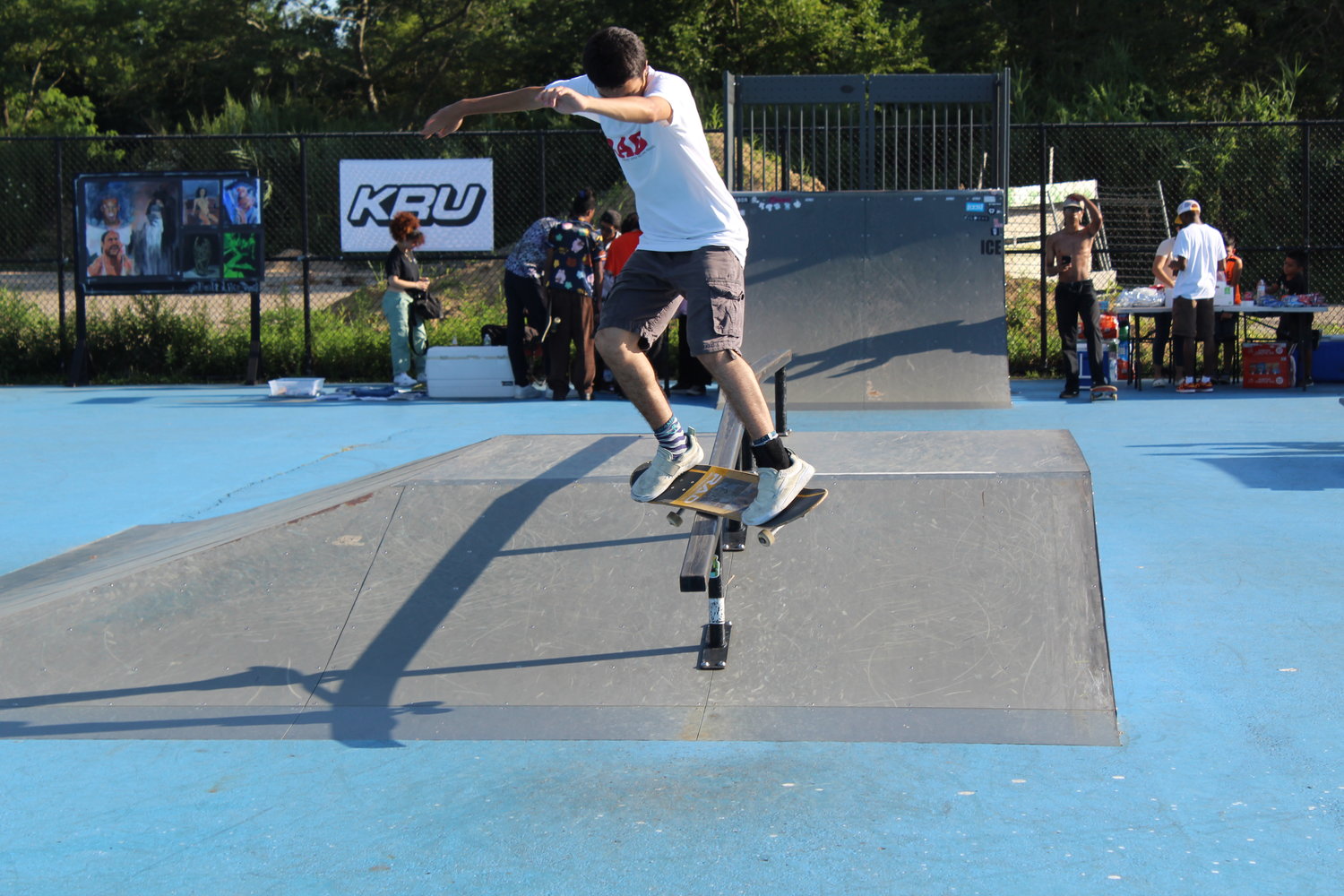 Matthew Weitman, 21, shreds it on the pyramid.
Karina Kovac/ Herald 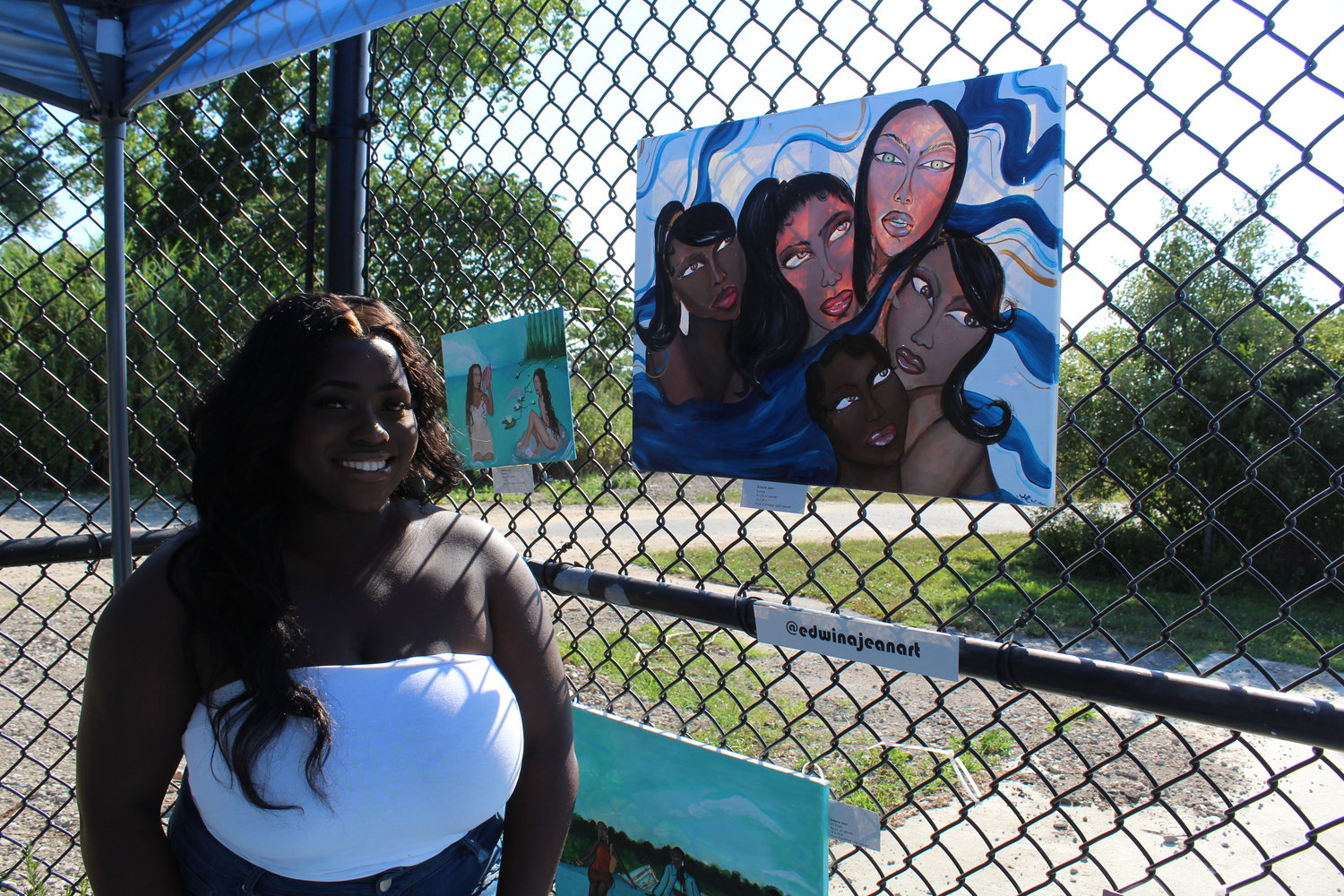 Edwina Jean had her art on display at the Beyond the Board event.
Karina Kovac/ Herald
Previous Next
By Karina Kovac

The Baldwin Park skate park is more than a simple recreation space — it’s a creation space where skaters and artists can gather, exchange ideas and kick back. Last Saturday, about 50 people of all ages got together for the second Beyond the Board art show.

Cruz Carbajal, a 24-year-old local, helped put the event together with a handful of other people, providing zip ties to hold art to the chain-link fence, deciding where the art should go and overseeing the food and drinks. “Last year we created this art show for local skaters and people from the community to display their art,” Carbajal explained. “Coming out of the pandemic, everyone had picked up new hobbies, so I think a lot of people don’t know how to showcase it.”

Which is where the skate park comes in, with its fence providing pseudo gallery walls. “This is a platform for our local creatives, and thankfully this year we were able to extend it,” Carbajal said. “We have people from New Jersey, the city — there’s more traction this year. We all have an attachment to this park, because the people who are here daily helped build it and design the park, so this park is very much home to a lot of Baldwin people and neighboring towns as well.”

One of the skaters who had a say in its construction was Jay Jawahir, 28, of Baldwin, who started coming in 2015, before the ramps were redesigned. Jawahir took off work as a fabricator and sign installer to attend Town of Hempstead town hall meetings to lobby for more features like ramps for skaters to shred on. The skaters got $60,000 to improve the park, and Jawahir and a handful of others made sure the pipes and ramps went in the right spots during reconstruction.

The experience changed him. “I was a bit antisocial,” he said, but he has since made some new friends, and some of them have described Jawahir as the “glue” that holds the skaters together. When they’re not at the park, they keep in touch by text, attend barbecues at his house, and go out to eat and to the movies. “It’s beyond skating,” he said. But for Jawahir, skating has always been the preferred method to “decrease stress and just get away from everything.”

“People know the park now, and they love coming here,’ he added. “You come here on a humid day, and there are tons of gnats and horseflies and you’re getting eaten up, and people still are so in love with skating that they’ll stay here for hours until it gets dark.”

Christian Vonduring, 17, said he has found a second home at the park, and on Saturday he was selling screen-printed T-shirts imprinted with “Beyond the Board 2.” Living five minutes away from the park, Vonduring is here “every day, pretty much,” and after 5:00, he added, “Everybody’s here.”

Vonduring was antisocial and bullied in school, but then he found the skate park and a family. “This changed my life, meeting everybody here,” he said. “… Right now, bro, I flourish. Everybody is so nice.”

Emma Wong, who explained that she wasn’t “coordinated in that way,” displayed some of her artwork along the fences. Wong, of Baldwin, is working on a double major in psychology and studio art at Hunter College.

Another artist, Edwin Jean, of Baldwin, had inspiring Black women on display in her corner of the park. Painting in acrylic for five years, she explained the motivation for her work. “My art is based on myself,” Jean said, “and I’m really into women empowerment and showing off how women can be different in different ways and techniques.”

Kevin Horvath, of Hempstead, and Orland Velasquez, of Freeport, two aspiring graphic designers who are taking classes at Nassau Community College, were selling streetwear from their brand Kru. Horvath said the event was important as a way to network, and “it brings people in the community together, and you get to see what they do outside of (skating) as well.”

Another participating college student was Justin Moucho, of Freeport, who is studying art at SUNY Albany, and has been painting for four years, since he started college. Doing so more seriously during the pandemic, as Carbajal mentioned many skaters did, Moucho was one of the people who “switched from skating to painting.”

Moucho said he was most excited to “see other artists here from Merrick, Freeport, Baldwin. It’s pretty cool to know a lot of people here are doing the same thing.”