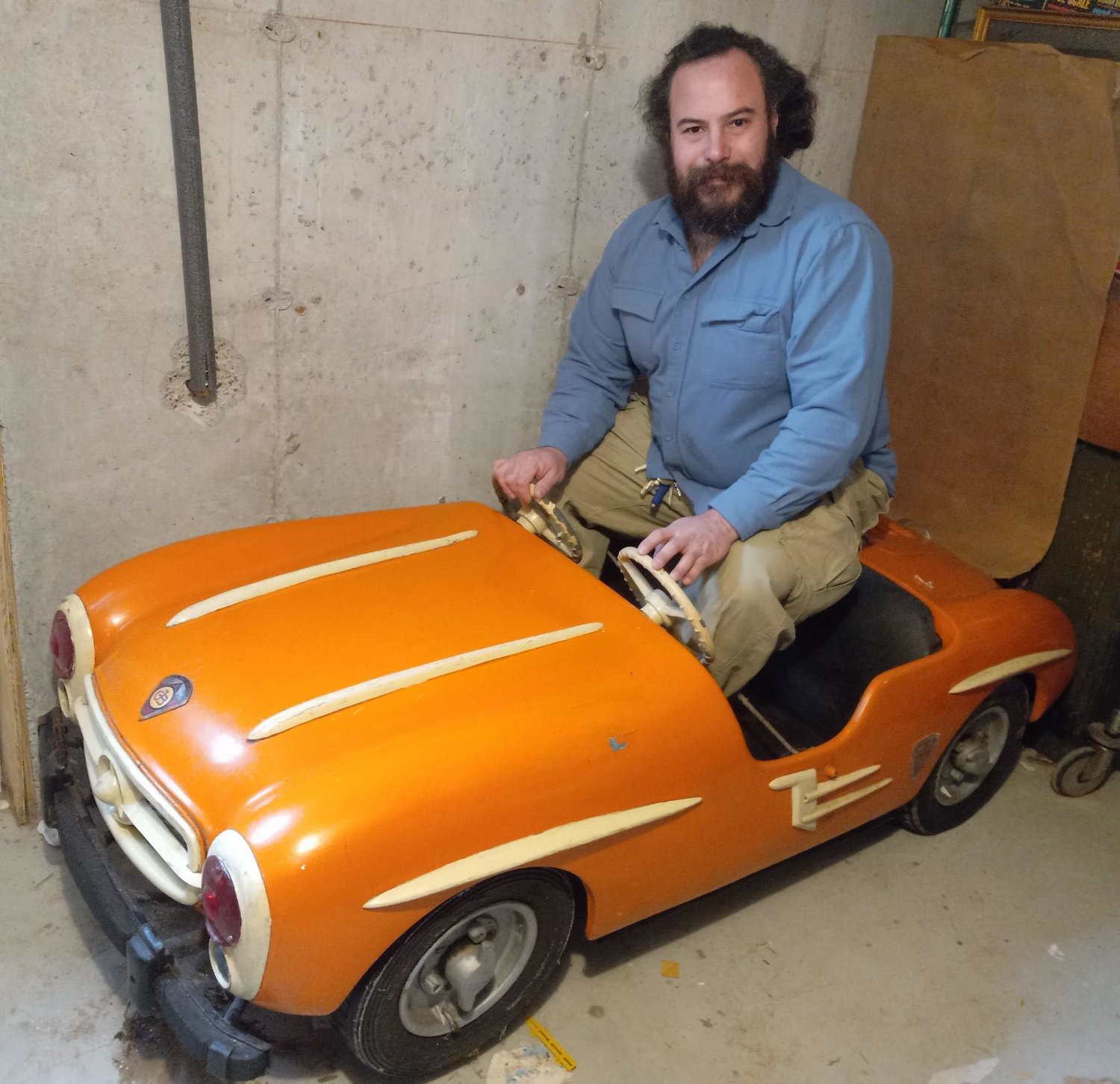 Being a collector himself, Sam Pardo, a co-manager of Hidden Thrift and vendor at Cabinet of Curiosities, owns one of cars from Nunley’s Carousel, among other Baldwin memorabilia.
Courtesy Sam Pardo

Memories are a lot of what we are… History is where we come from.”
Karen Montalbano, Baldwin Historical Society
Objects available include:

On the Baldwin-Freeport border sit two secondhand shops full of history and nostalgia. Hidden Thrift and Cabinet of Curiosities are nestled next to each other at 52 Mill Road in Freeport. The stores, which are celebrating their first anniversary, offer tangible memories of simpler days in Freeport and Baldwin. Invited to buy out estate sales from Long Island, especially in Baldwin, the shops host different vendors.

Sam Pardo, 36, a co-manager of Hidden Thrift and vendor at Cabinet of Curiosities, grew up in Freeport, but has many childhood memories in Baldwin, including riding the famed Nunley’s Carousel, which operated from 1940 to ’95, and can now be found at the Nassau County Children’s Museum in Garden City, still running. “I remember going there as a kid and having multiple birthday parties… and I remember when it closed, it wasn't a nice time,” Pardo recalled.

Tending to the shop, Pardo has noticed changing trends in Baldwin, with many people trying to buy back nostalgic items from their childhoods. Pardo said the “psychology of simpler days, of all the fun that [people] used to have,” is why many adults with disposable incomes seek the toys they played with in the 1970s and ’80s.

Karen Montalbano, 63, of the Baldwin Historical Society, has held many Baldwin Public Library lectures on the history of Baldwin and collects turn-of-the-century postcards. “Memories are a lot of what we are… History is where we come from,” she said.

Objects help people remember where they came from, Montalbano and Pardo said, with Pardo adding that one of the heartwarming parts of working at the shops is hearing people recall their pasts through the mementos that he sells.

“Some of my favorite objects are ones that have brought back memories for other people that they tell me, ‘Oh, I had that as a child and my grandmother had that.’ They are monuments or beacons to the past,” he said.

“Objects survive…as long as we take care of them…They can be passed down from generation to generation and they tell a story,” Pardo added, explaining how it is environmentally friendly buy from secondhand stores.

Montalbano agreed, saying society has lost the practice of reusing items. “There's a whole global thing to this as well. We've become a society which gets rid of stuff too quickly without looking at it and seeing what can be repaired, what can still be used,” she noted.

Pardo said he hopes young people become more enthusiastic about their history and reach out to their local historical societies and shops to learn about what is around them. Young people, he said, “will eventually become part of history, and [they] need to learn from the past to just keep making the future better.”