Town breaks ground in Seamans Neck; Little League to get a new field 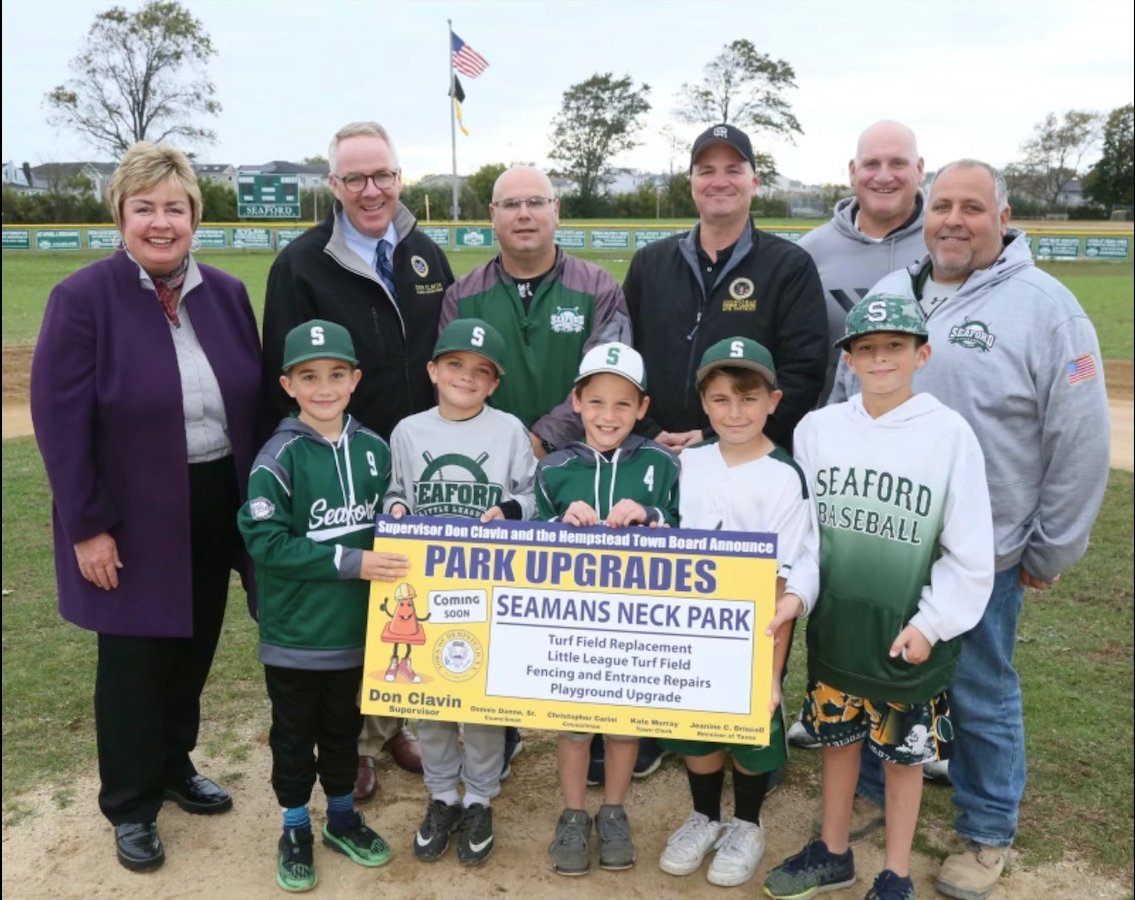 Construction at Seamans Neck Park in Seaford began on Nov. 22. The project has been in the works since 2017.
Courtesy T.J. Koerner
By Mallory Wilson

The Town of Hempstead last month broke ground on a $2 million reconstruction project at Seamans Neck Park in Seaford.

Reconstruction of Fields 2 and 3, which are used by Seaford Little League teams, began Nov. 22. The project is being funded as part of the town’s capital improvement projects.

Field 2 will be upgraded from dirt to artificial turf, and Field 3, a multipurpose turf field used for baseball, football and lacrosse, will be replaced due to damage from use. The fields will also get new bleachers, backstops and fencing.

“The money became available due to our increased bond rating,” Town Councilman Chris Carini explained, “which allowed us to borrow more money and save the taxpayers money.”

Carini added that Seamans Neck Park has had drainage issues for years, which has affected field use. “We have a low water table,” he said, “and when it rains, the water stays there for a bit and rains out their games.” The addition of a turf field will alleviate some of those problems, and fewer games will be rained out.

The project is estimated to be finished by next spring. And it’s just the beginning, Carini said: The town plans to invest $10 million in its parks next year. “Youth sports have become more and more prevalent on Long Island,” he said. “Our fields already are so packed because of all the sports leagues there are.”

T.J. Koerner, the Seaford Little League president, said the construction would reduce Litle League game cancellations. “Field 2 would always flood, and we wouldn’t be able to play for two to three days after it rained,” he said. “… You’d be telling little kids on beautiful days that they won’t be able to play because the field is still underwater.”

Last season, about 16 games were canceled or rescheduled, Koerner said, adding that he believed the flooding had worsened since Hurricane Sandy ravaged Seaford in 2012.

Seaford fielded its first Little League teams in July 1952. According to a 1970 article in the Seaford Historical Society Quarterly, the league initially struggled to find enough boys to play, but “with a treasury of $252.50 and sponsor support, a four-team league” was created. The organization has expanded in the decades since, and roughly 600 children sign up every season.

“It’s a solid number compared to some other small towns,” Steve Brown, a former league president, said. Brown, who has been involved with the league for over a decade and took over as president in 2017, said he wanted to make a lasting impact on the organization. “What better way than a major field upgrade?” he said.

Koerner noted that Brown was working to renovate the fields during his tenure, and that he made the push for this construction work about four or five years ago. “I just picked up the work off his back and just kept pushing it even more,” Koerner said. “With the help of Chris [Carini] and the Town of Hempstead, we were able to get it done this year, but it’s been a long process.”

In February 2020, the league’s executive board met with the Town to get the ball rolling on the field uipgrades, but the coronavirus pandemic put the project on hold.

Once state restrictions were loosened, Brown said, the town contacted the board with a surprise: “They told us that they weren’t only going to do the upgrades that we asked for, but would also continue with the other field,” Brown said.

The Seamans Neck Park renovations are separate from the recently proposed changes that may come to Seaford High School’s fields. At the Nov. 17 district Board of Education meeting, Russell Costa, director of school facilities, and Kevin Witt, director of physical education, health and athletics, gave a presentation on the possible creation of a multi-purpose field at the high school. The project would include the relocation of the varsity baseball field and numerous infrastructure upgrades.

That project, which is in the preliminary stages, would appear as a proposition on the ballot of next May’s school board election, and would require voter approval for the district to use funds from its capital reserve.

Brown said that the town was on target with the proposed project timeline, and that the upgrades would be worth it. “It’s money well spent,” he said. “It’s a great playing surface.”

And it’s all for the kids, Brown added. “This is the future of Little League,” he said. “. . . If you give the kids good stuff, you expect good stuff back from them.”