Baldwin community gets together for the milestone birthday party 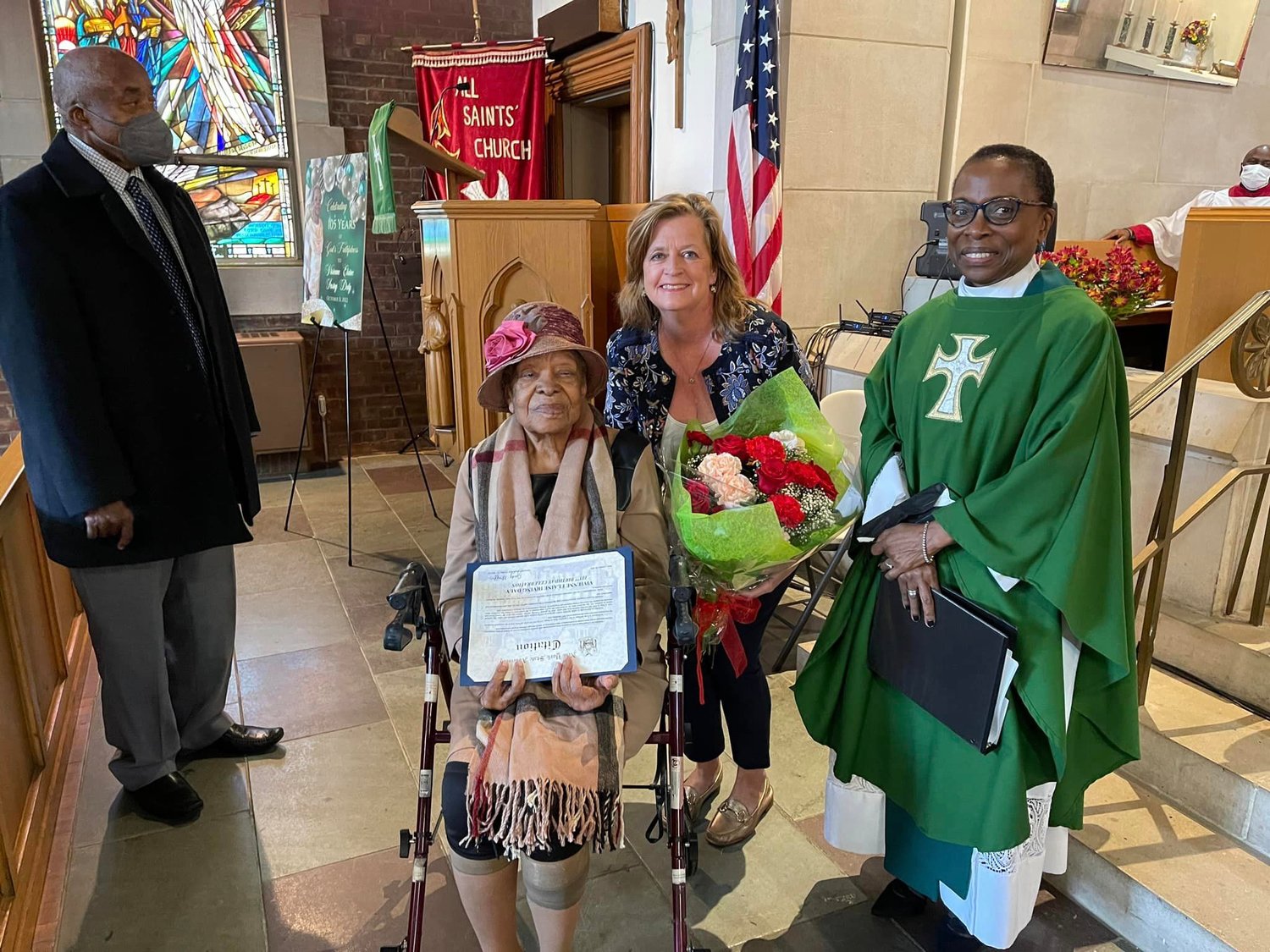 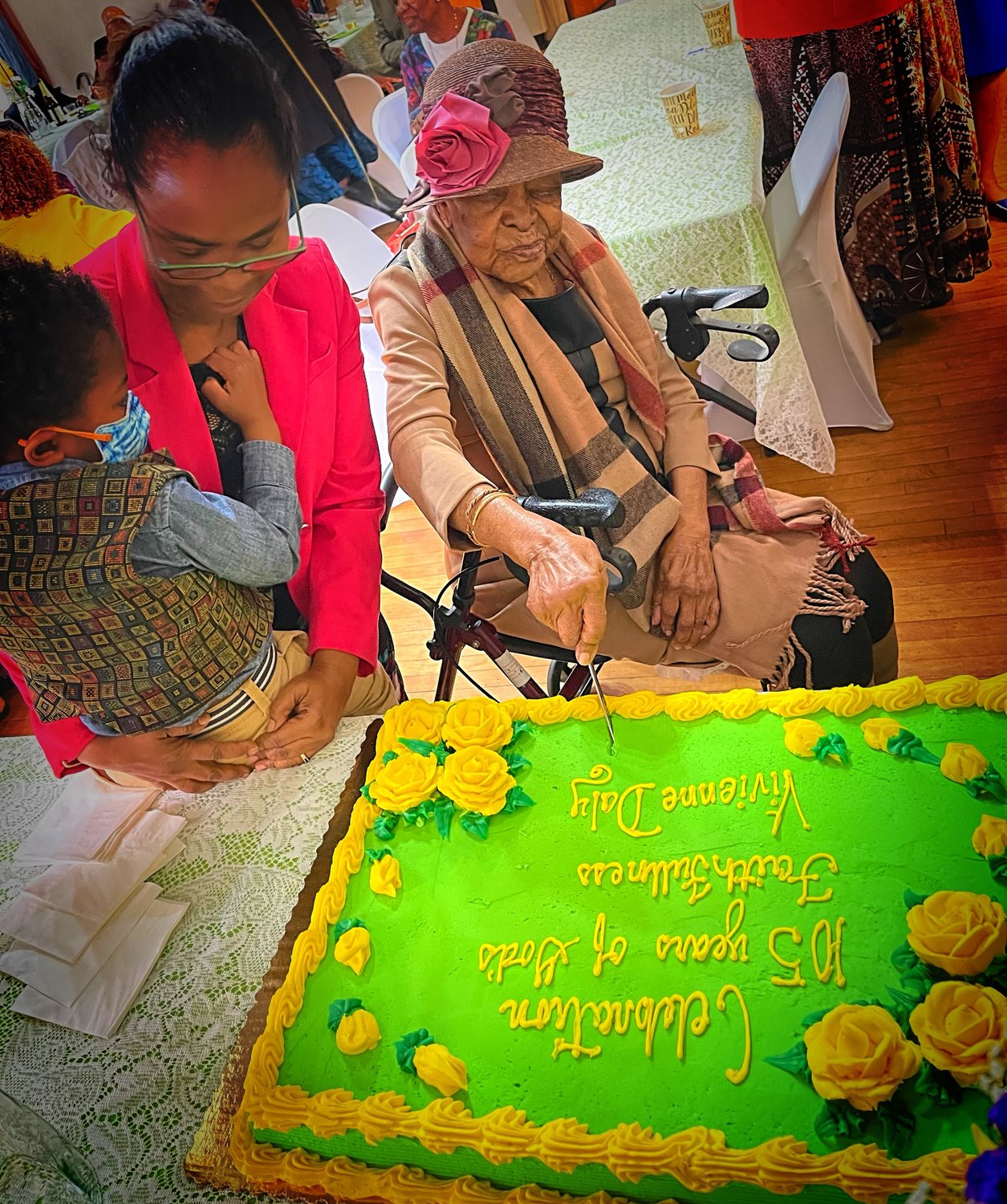 Vivienne Daly, of Baldwin, celebrated her 105th birthday last week with fellow members of the All Saints Episcopal Church.
Courtesy the Rev. Maxine Barnett
Previous Next

After 100 years of reading, you can ask her a passage from the Bible now and she can tell it to you from memory.”
Gloria Frederick, sister
By Andre Silva

Daly, an All Saints Episcopal Church parishioner who is originally from Guyana, enjoyed a party with her friends and family at her home on Center Drive on Oct. 31.

Daly was born in Georgetown, the capital of Guyana, in 1917, when the country was known as British Guiana. She was one of three daughters of Lillian and Clifford Irving, a former headmaster at St. Saviors Anglican Church, a parochial school in Guyana.

In 1949, Vivienne married Vere T. Daly, a tutor and principal at Diamond Government School, and they had five children together. Her four surviving children, Marilyn Persico, Olney, Reginald and Deryck, and her grandchildren, Nadeje, Janelle and Cabral, and great grandchildren, Taylor and Tristan, celebrated her birthday with her.

Daly came to the United States in 1981, at age 64, to care for her late daughter, Eslyn Sylvester, and her children in Baldwin after Vere Daly died. She has spent the past four decades here, helping to raise her grandchildren and caring for a neighbor’s children as well.

“I came here to care for my daughter, who had two small children,” Daly said. “She lived in Baldwin, and worked at the United Nations at the time.”

Daly’s daughter Dr. Olney Daly, who retired from the United Nation Development Programme, said that her mother’s guidance and focus on education helped her siblings achieve success in their lives. Persico retired from the National Academy of Sciences, and their brother Deryck is a retired Shell engineer.

“That’s what happens when you have a mother who stays home to make sure you do your homework,” Olney Daly said.

She added that home care from her family, along with a nurse and an aide, has contributed significantly to her mother’s longevity, and that the combination of family members, neighbors and her church “family” at All Saints Episcopal helps Vivienne socialize, and is more beneficial than a care facility. She said her mother also loves to read, play games like Sudoku and do crossword puzzles, which help keep her mind sharp.

“After 100 years of reading, you can ask her a passage from the Bible now and she can tell it to you from memory,” said Vivienne’s surviving sister, Gloria Frederick, 89, a retired nurse who lives in Georgia. She traveled north last week to celebrate her sister’s birthday. Frederick said that Vivienne is well traveled, and has visited Canada, Europe and nations across Africa and Asia. She said that wherever her sister goes, she loves to read the newspaper and get involved with the local culture and struggles of a nation.

“Wherever she is, be it Kenya or Tanzania, she always got involved with current events and politics,” Frederick said.

On Oct. 30, All Saints Episcopal held a special birthday ceremony in Daly’s honor.

The Rev. Maxine Barnett said she welcomed more than 70 parishioners to celebrate Daly’s long life, in the church and on a Zoom livestream.

“I believe you have lived up to your name, Vivienne, which means ‘life’ or ‘alive’ — and I speak not only of your longevity and vivaciousness, although both are impressive,” Barnett said. “I also speak of your life in Christ, for in this, you have been a shining example for all of us.”

Dr. Terri Mangum, an All Saints Episcopal parishioner, gave Daly a brief tribute after presenting her with a bouquet of flowers on behalf of the church. Mangum described her as a role model, a beloved adopted mother and a favorite person in the community. She said she was proud to present Daly with the flowers in pink and yellow ribbons, which she said paled in comparison to her beauty.

“Ms. Vivienne Daly is a phenomenal woman, which is not determined by size or shape, but rather how you carry yourself and how you treat others,” Mangum said. She added that a phenomenal woman is someone who is unbowed, holds her head high and puts her family first while making a positive difference in the world. Daly, Mangum said, embodies all of these traits.

Assemblywoman Judy Griffin, who also attended the service, read a proclamation honoring Daly, and presented her with a state citation and a bouquet of flowers.

“Today she was blessed to be surrounded by so many close friends and family,” Griffin said.