Bellmore JFK celebrates its sports history in Hall of Fame 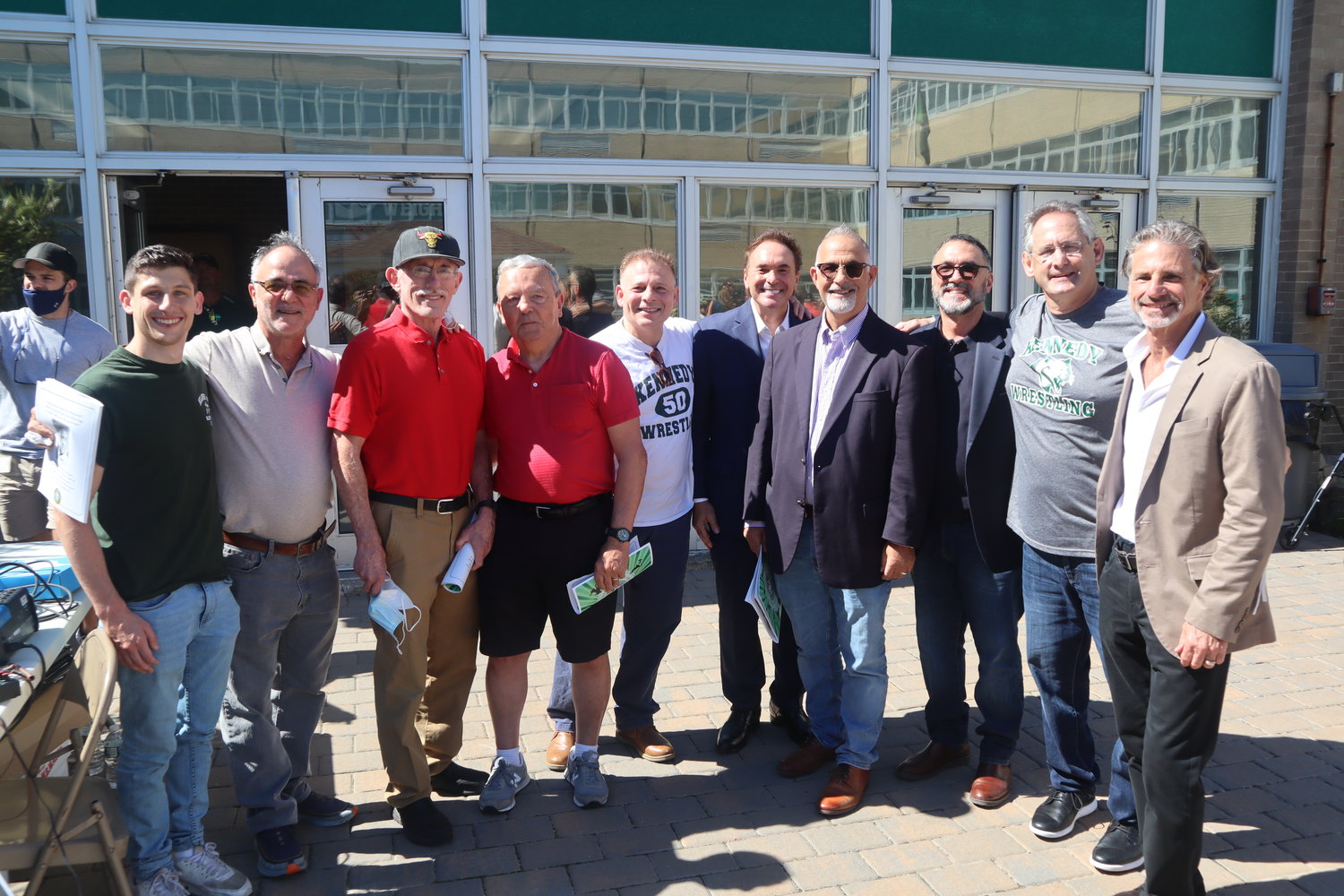 JFK wrestlers from decades past attended the unveiling of the school’s Athletics Hall of Fame last Saturday.
Andrew Garcia/Herald 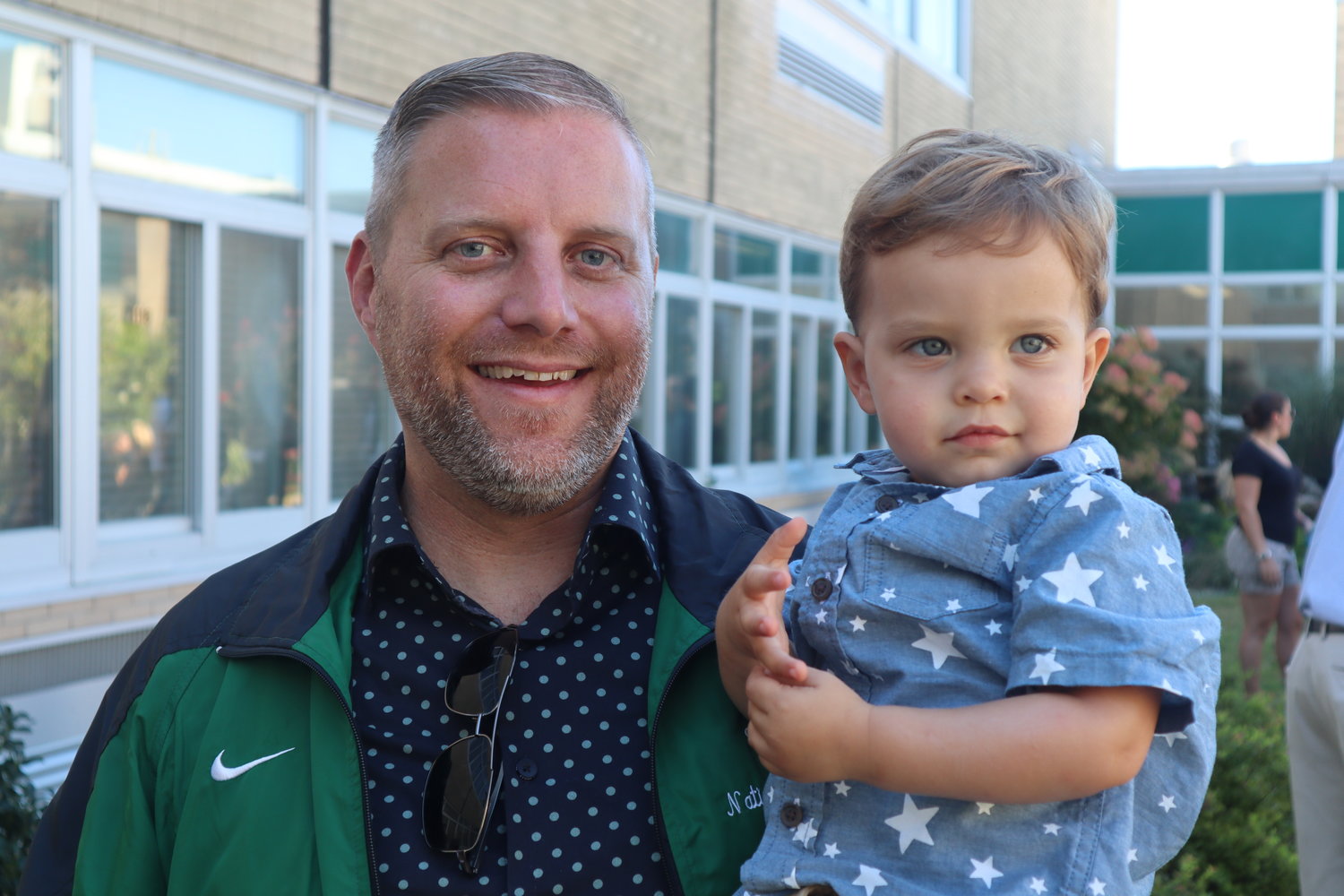 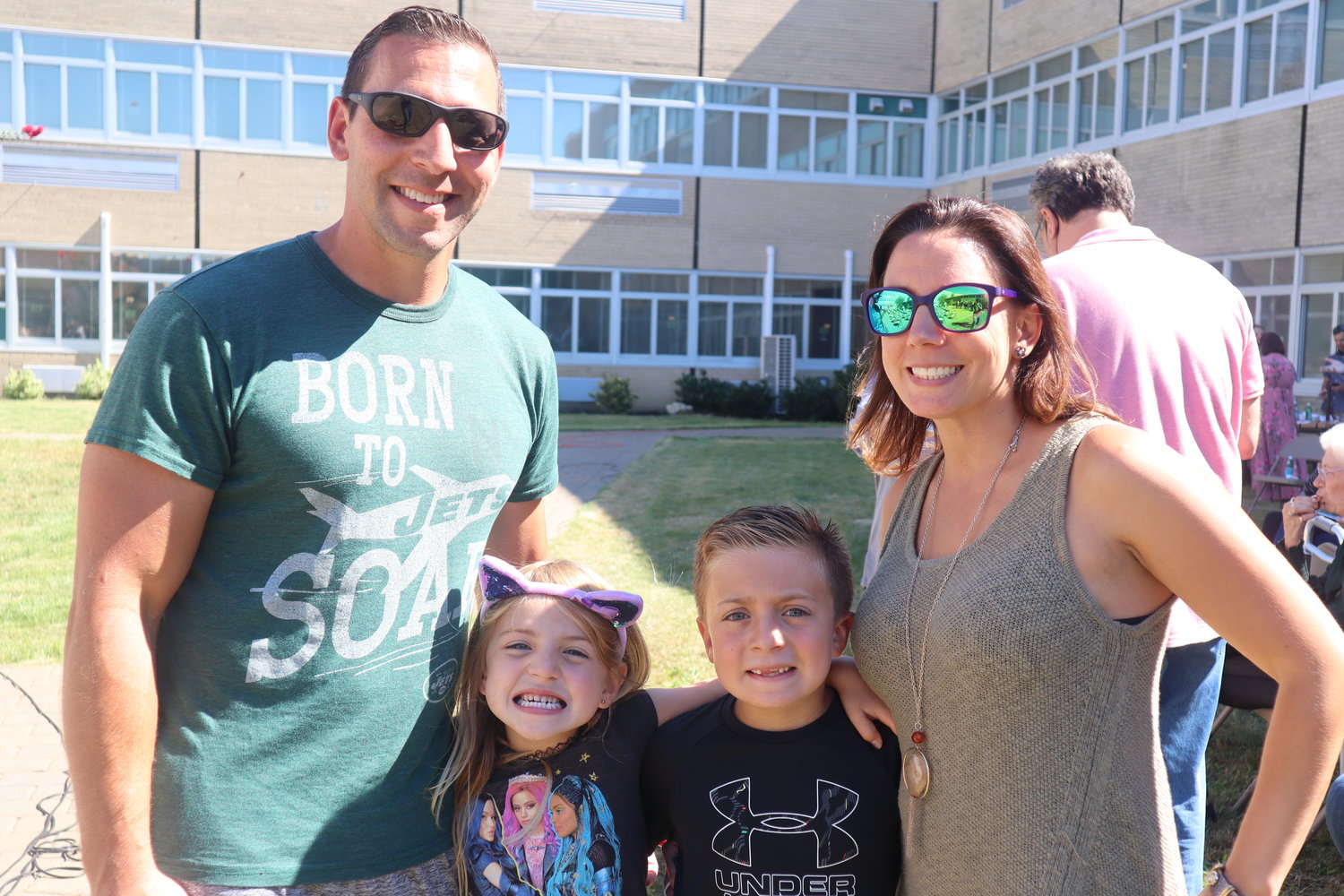 Inductee Frank Potucek came with his wife, Jamie, and their kids, Julie and Luke.
Andrew Garcia/Herald 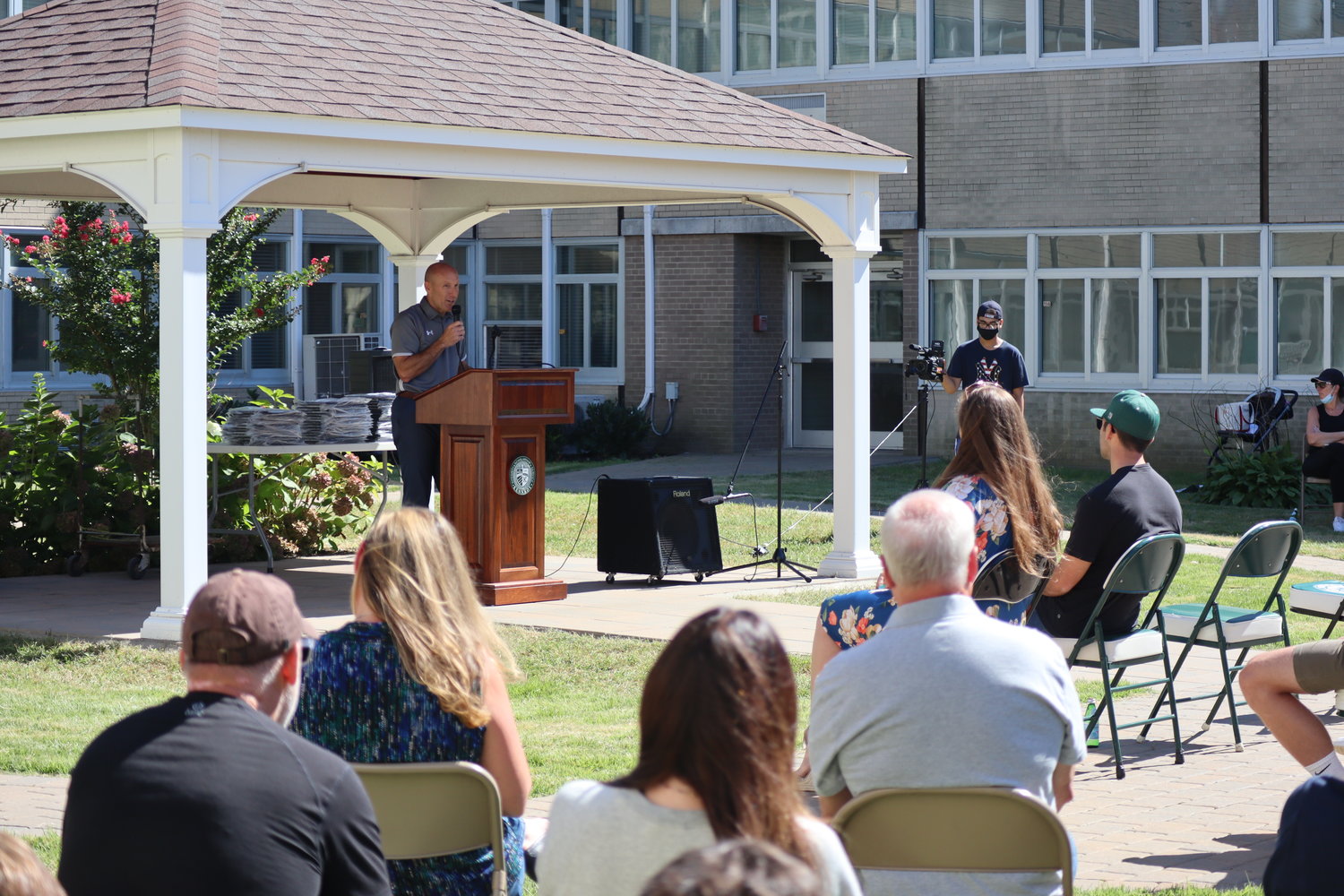 The ceremony was held in the Lorraine Poppe Pavilion, named after the former principal.
Andrew Garcia/Herald 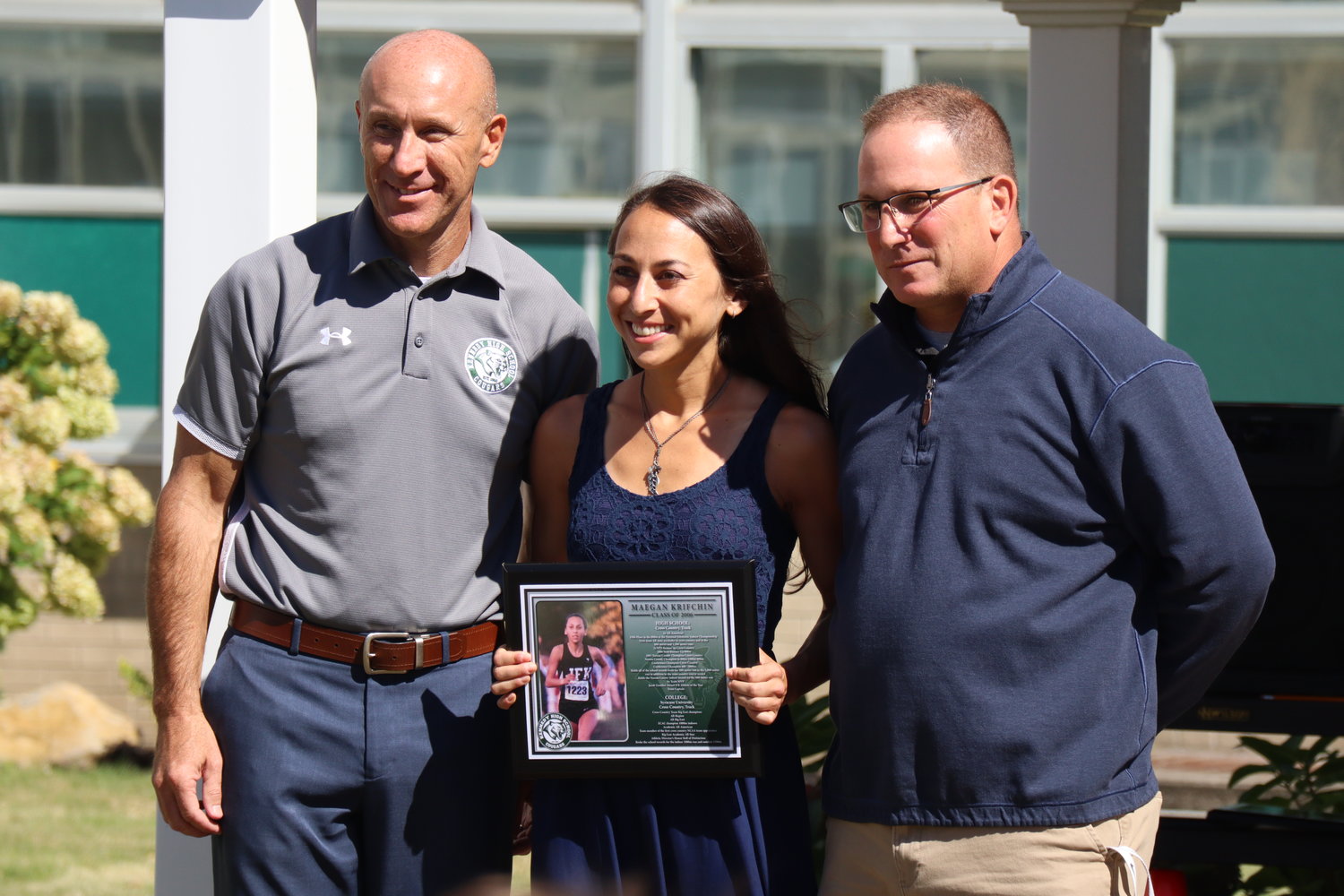 Maegan Krifchin was inducted and stood with her plaque alongside Principal Gerard Owenburg and Coach Brian DeGaetano.
Andrew Garcia/Herald 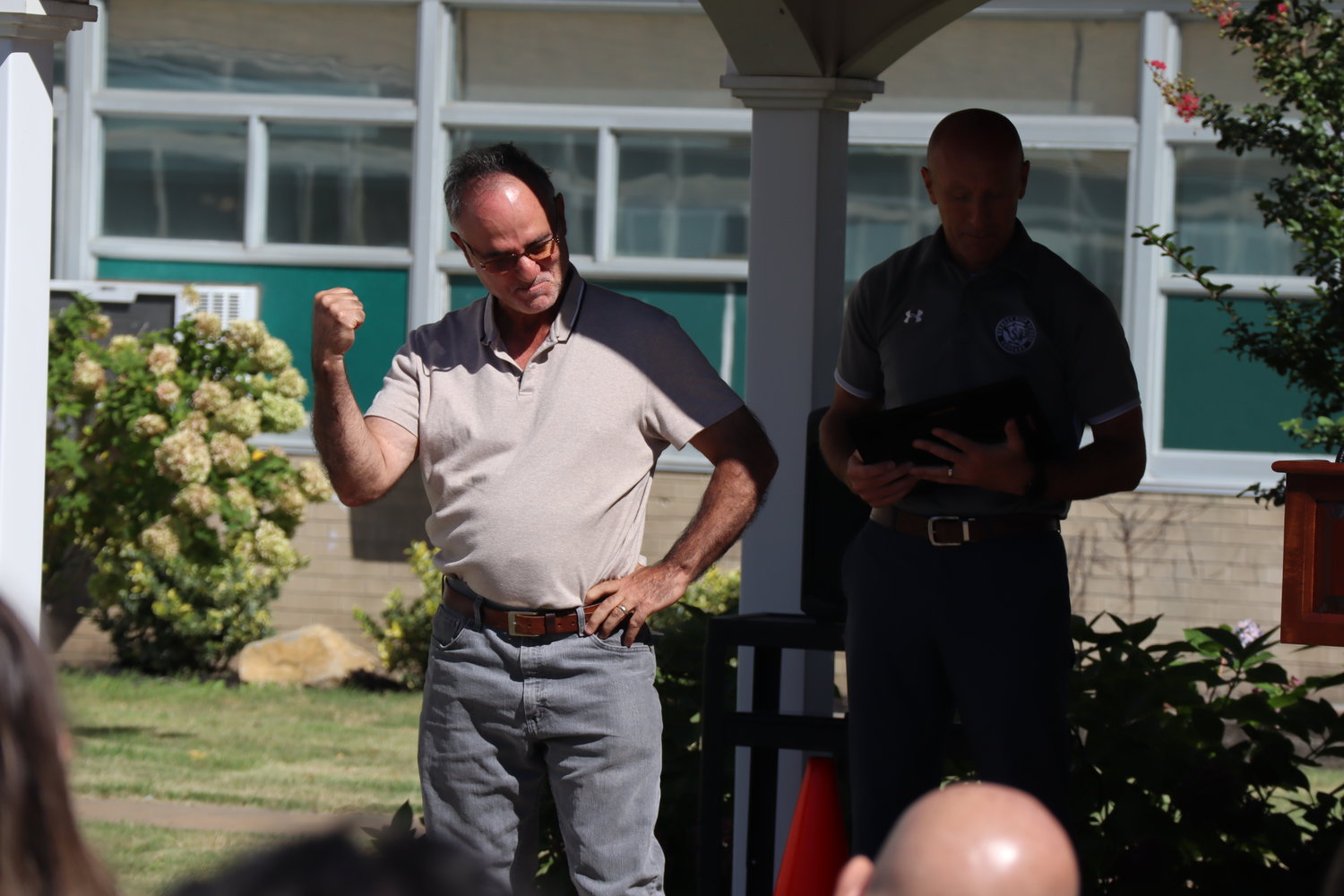 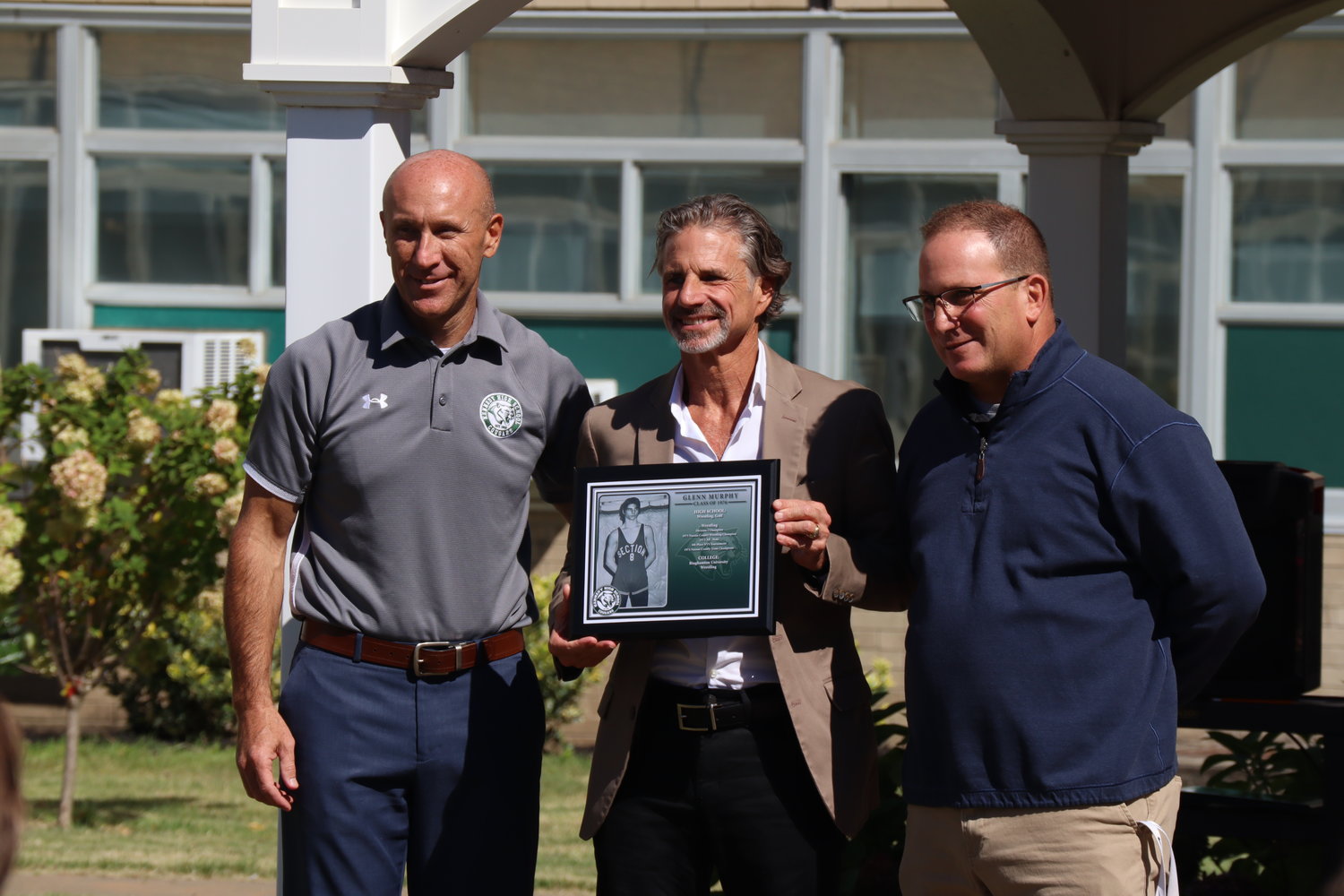 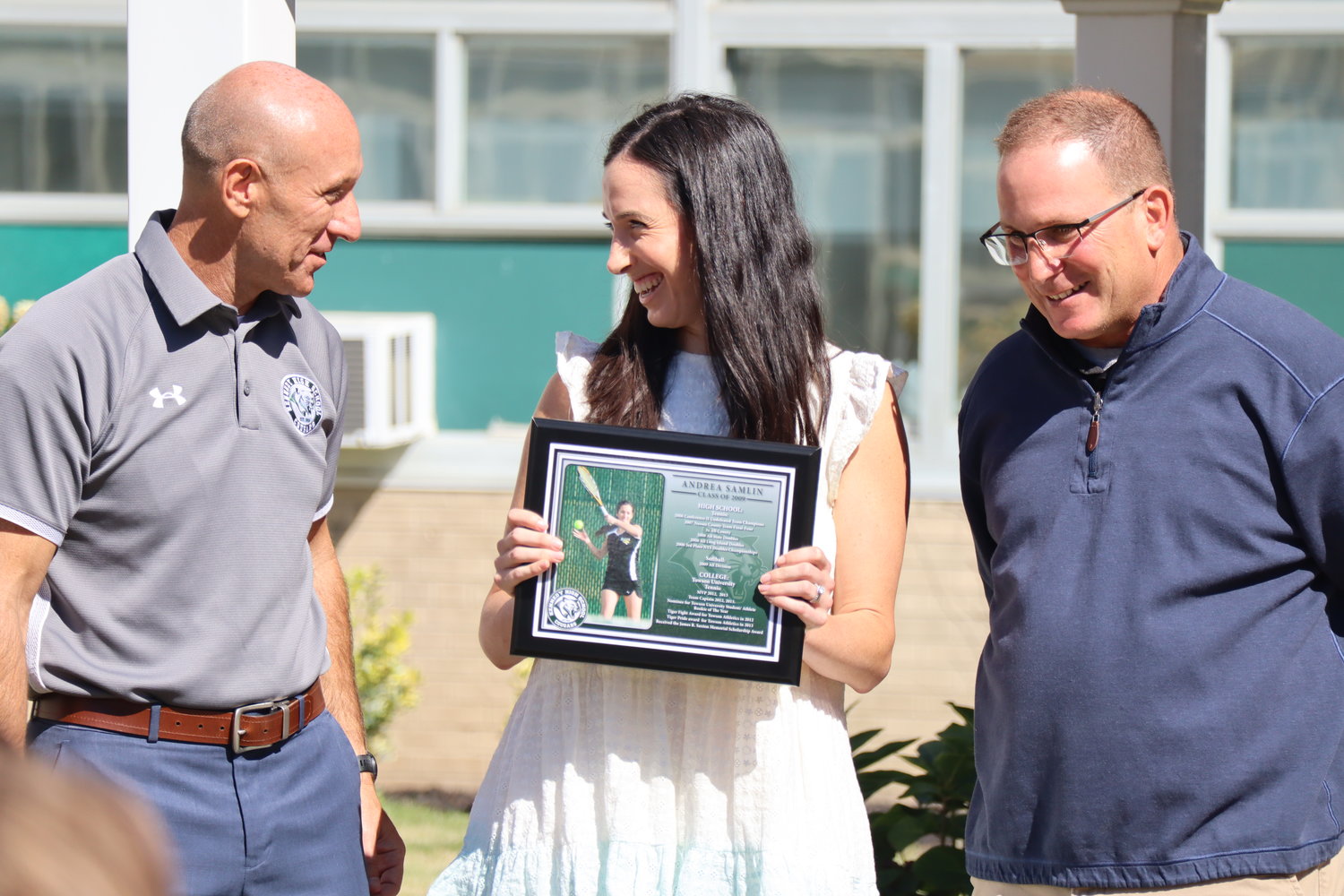 Andrea Samlin, a 2009 graduate and tennis player, was all smiles with her plaque.
Andrew Garcia/Herald 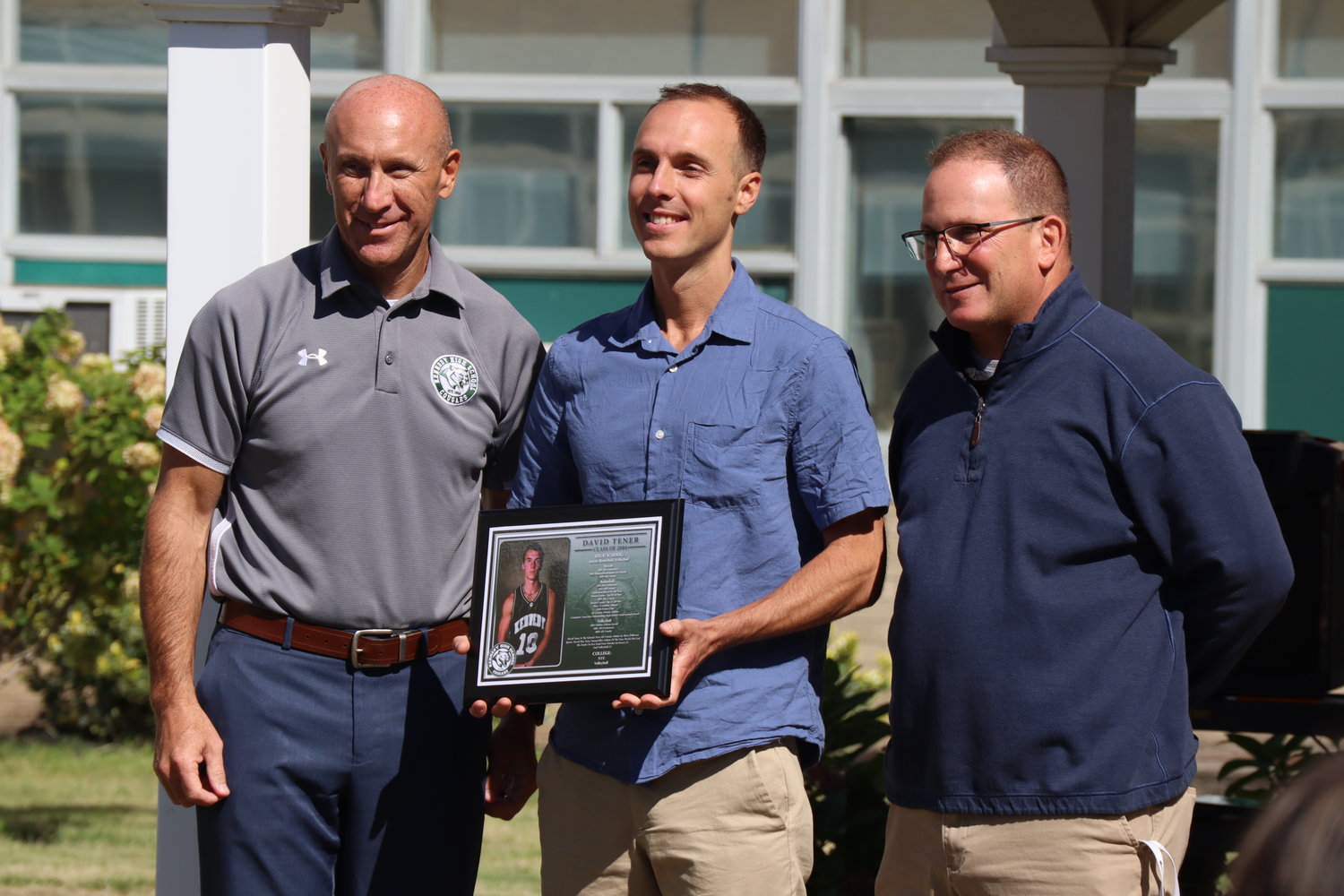 Carly Thea stood next to her plaque hung in the Hall of Fame.
Andrew Garcia/Herald 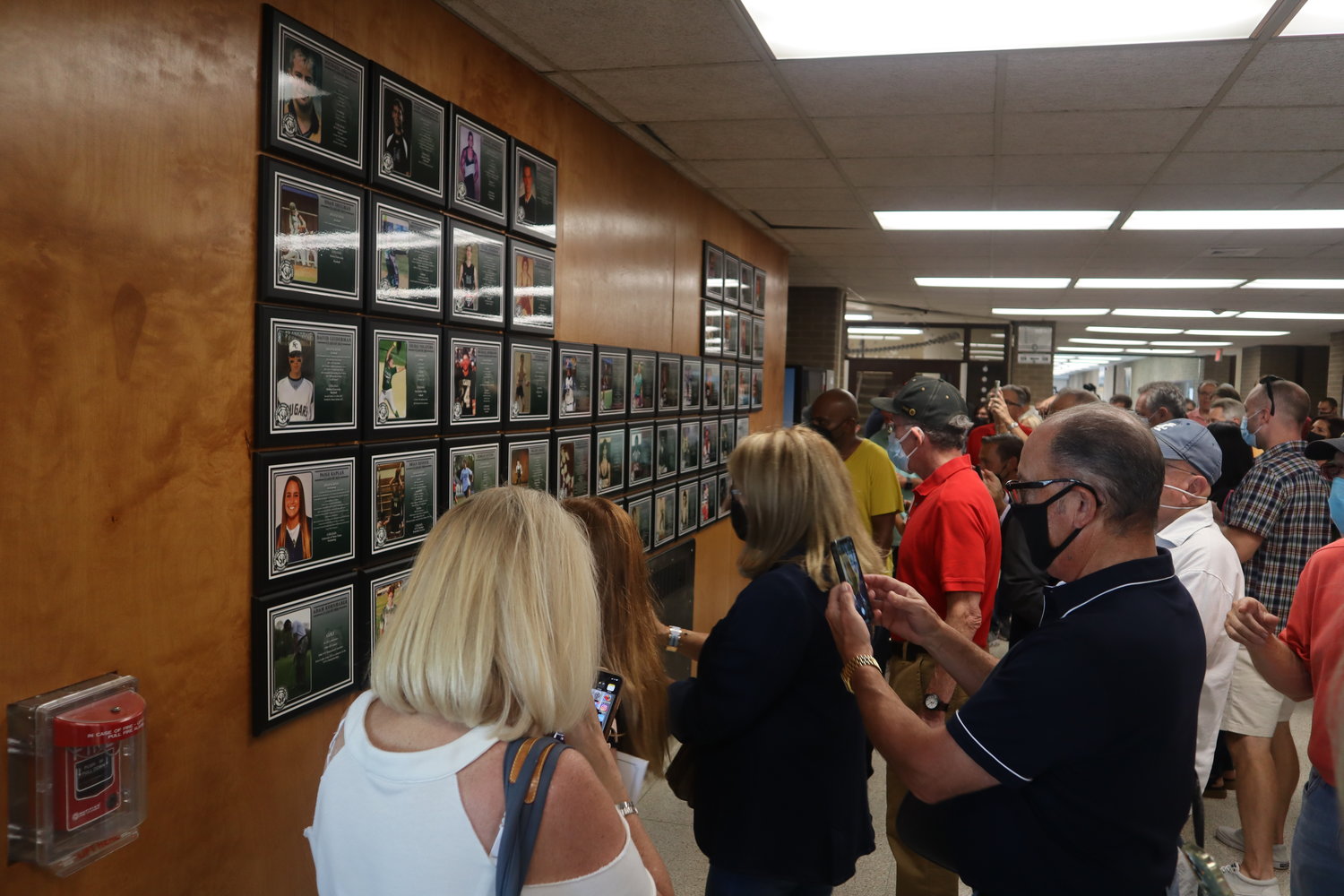 Past athletes and family members crowded the Hall of Fame after the reveal.
Andrew Garcia/Herald
Previous Next
By Andrew Garcia

On Saturday, John F. Kennedy High School was home to both current students, celebrating the Homecoming game, and dozens of alumni, representing decades of the school’s sports history. There was a pride-filled and nostalgic gathering of more than 100 in the courtyard, marking the completion of a project years in the making.

The JFK Athletics Hall of Fame made its debut, giving many of the former athletes a chance to relive the highlights of their noteworthy careers. One by one, 53 honorees from as far back as the class of 1969 were inducted. And there was perhaps no better place to hold the ceremony than the Lorraine Poppe Pavilion, named after the school’s popular former principal, who retired in 2018 and died the following year.

The idea for the Hall of Fame was hatched under Poppe’s influential leadership. Phys. ed. teacher and coach Brian DeGaetano and Poppe’s successor, Gerard Owenburg, brought the concept to reality. DeGaetano’s running list of the school’s best former athletes dated back only to 1994, but since May he had been researching and contacting sports stars from earlier years.

“This is a project I’ve wanted to do for 25 years,” said DeGaetano, who is in his 28th year at Kennedy.

At what was likely one of the largest gatherings of Kennedy alumni in years, memories were recounted in abundance. Newly reunited former teammates shared tales of triumph.

“We were the best team ever,” said Sheldon Hirsch, a wrestler who graduated in 1973. “Let me put it this way: I was a county champ, and I was easily the least good of the five.”

Frank Potucek, who graduated in 2000 and continued his lacrosse career on a scholarship at Johns Hopkins University, recalled his training under DeGaetano and coach Craig Papach. “They would always keep encouraging me after every game and every practice,” Potucek said. “I owe them a lot.”

Potucek attended with his wife, Jamie, a Kennedy alumna who also played lacrosse, and their children, Julie and Luke. The ceremony was a familial event for many others as well. Brothers and sisters from several families were inducted.

Wrestling, in particular, is a family sport, said Rich Lubell, who graduated in 1974. “It’s a tradition where brothers perpetuate it and follow in the footsteps of their brothers,” he explained.

Although he was the only Lubell in attendance, Rich was inducted with his brothers Eric, William and Rich’s late twin, Daniel. Former teammates gathered once again, Lubell and the other wrestlers were ecstatic. They recounted their careers as county champions and some of the state’s best grapplers. “We used to be intimidating to other teams,” Lubell said.

“They saw something in me and really got the fire going,” Maegan Krifchin, a 2006 graduate who was a high school All-American in track and still runs professionally, said of the Kennedy coaches. “They instilled a competitiveness and ambition in me, and that kept me going through college.”

The unveiling of the Hall of Fame was also meant to show Kennedy students the heights the alumni have reached. Many have gone on to stellar careers as doctors, attorneys, teachers, judges. “As the plaques were being installed on the wall in our gym lobby, crowds of students were already reading the accomplishments of our alumni,” Owenburg said. “This is exactly what we hoped for.

“At the ceremony, I shared this with the inductees,” he added, “because I wanted them to know that their accomplishments being memorialized in our Hall of Fame will help our students know that if they work hard and follow their dreams, there is nothing they can’t achieve.”

The 53-member inaugural class of the Hall of Fame is now on display in the foyer of the gym. After the grand reveal, the athletes searched for their plaques and proudly stood for photos with family members.

The school will have a nomination form and a database of names for future potential inductees. In addition to promoting interest in school sports programs, Owenburg said, “Our hope is that this event spurs interest, and people give us names and contact information.”