Live, from Israel: Charlie Goldberg to be part of inaugural Maccabi Media Program 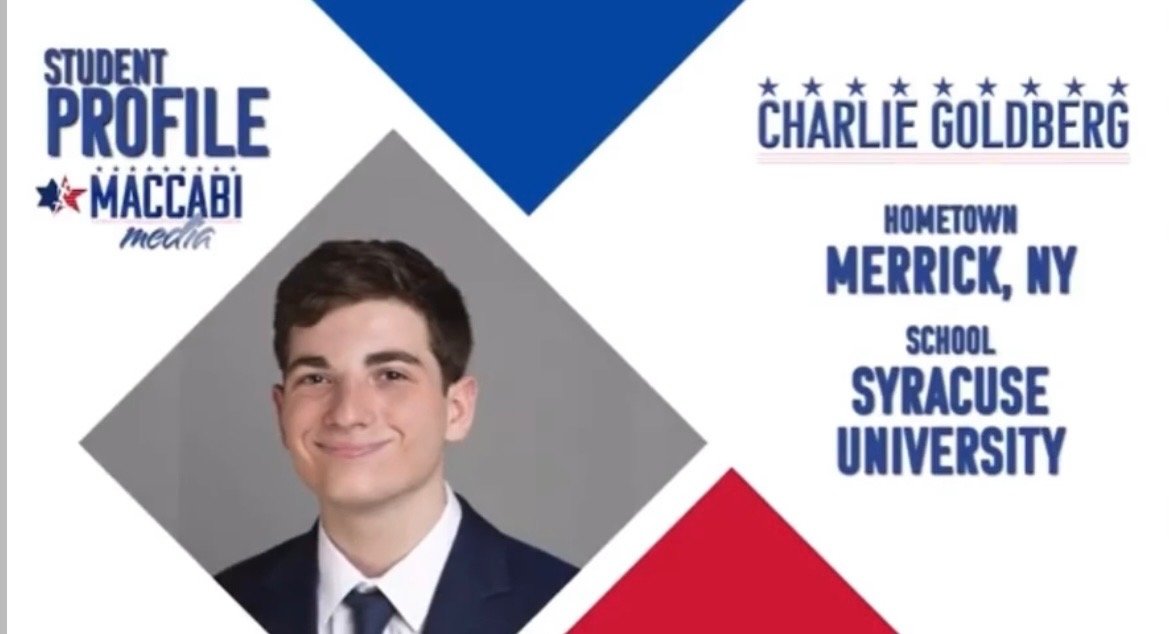 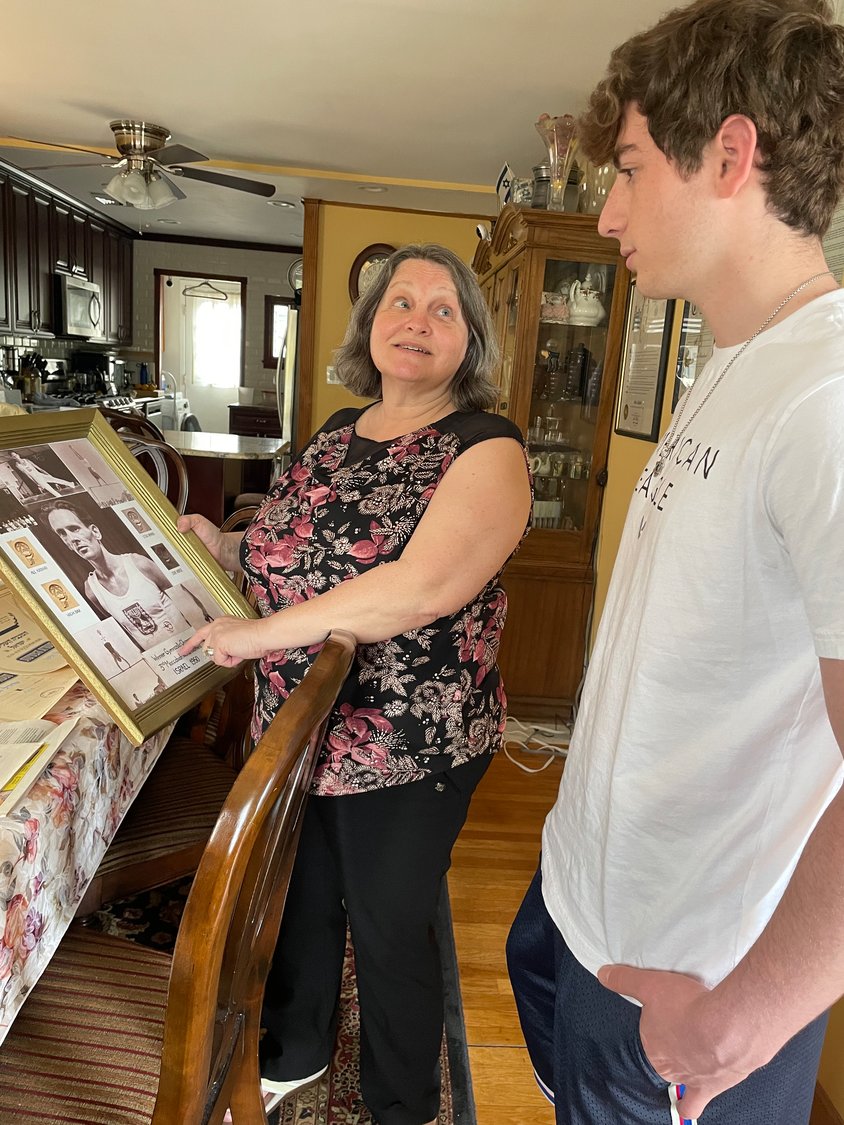 Goldberg, the former social media manager of the South Merrick Community and Civic Association, met with Berta Weinstein, the SMCCA’s vice president. Weinstein’s father, who led a remarkable life, competed as a gymnast in the 3rd Maccabiah Games.
Jordan Vallone/Herald
Previous Next
A connection like no other

Charlie Goldberg, who is heading to Israel this summer to be part of the inaugural Maccabi Media Program, was the first social media manager for the South Merrick Community and Civic Association.

Through SMCCA, Goldberg knows Berta Weinstein, the group’s vice president, whose father — a Holocaust survivor who fled the Nazis to live in what was then Palestine — competed in the 3rd Maccabiah Games, which took place in 1950.

An Austrian-born gymnast, Walter Schacherl competed despite having only seven fingers. Three were severely injured in a printing press accident that likely saved his life: When a Nazi physician examined his hand, he was sent to a hospital instead of a barracks.

“My father lived with a lot of anti-Semitism in Vienna,” Weinstein said.

Weinstein added that a friend of her father’s, who was not Jewish and had joined the SS, told him he needed to leave Austria, and he did, joining his brother in Palestine just months before Kristallnacht. He never saw his parents again. In Palestine, which was under British rule, Schacherl joined the British Army during World War II and worked as a mapmaker.

Weinstein, who has all of her father’s possessions from the Maccabiah Games, showed Goldberg images of her father competing, as well as his gold, silver and bronze medals, at her Merrick home on Monday.

Maccabi USA’s mission is to build Jewish pride through sports, and for Goldberg, there was no better way or place to visualize and bridge a connection to Israel than at home in Merrick.

Charlie Goldberg may be best known around town for being the “on-air extraordinaire” of Charlie Goldberg Live, a media network he created while a student at Sanford H. Calhoun High School.

Now studying at Syracuse University’s S.I. Newhouse School of Public Communications, the Merrick native continues to make waves inside and outside school. In July, Goldberg will be part of the inaugural Maccabi Media Program for Maccabi USA. He is set to head to Israel to be part of a 14-person team of aspiring sports media professionals from across the U.S. who will do play-by-plays, sideline coverage, color analysis and more during the 21st Maccabiah Games.

The Games, often referred to as the Jewish Olympics, are a month-long, international Jewish and Israeli multi-sport event held quadrennially in Israel. In December, when Goldberg learned of the applications for the media team, he put a lot of work into it, he told the Herald.

“I had to submit a reel — a lot of information about myself and who I am,” he explained. “I had to write an essay as to why I wanted to be in this program — a couple of writing works.”

His mother, Jodi Turk-Goldberg, who works in the events department at Richner Communications, the parent company of the Herald, added that Charlie had worked through the night at times. “It was kind of like a week to the deadline, and I woke up the next morning and he was like, ‘I recut my whole reel,’” she said. “He pulled an all-nighter.”

In January, Goldberg said, he was interviewed by former Philadelphia 76ers broadcaster Marc Zumoff, who is chairing the Maccabi Media Program, and Media Coordinator Neal Slotkin, a sports producer who has spent 27 years at several notable outlets including ESPN, NBC Sports Philadelphia and the MLB/NHL Network.

“I found out in late January — in my Hebrew class, of all places — that I would be part of the team, and I was ecstatic,” Goldberg recounted.

The program starts on July 2, and for the first few days, Goldberg will spend time at Temple University, in Philadelphia, training with fellow program participants. Leading up to that, however, the team has been meeting monthly on Zoom.

“We’ve been having monthly Zoom sessions with Neal and Marc, and they’ve been having a lot of guest speakers, play-by-play commentators and a lot of PR people,” Goldberg said. “It’s been a very helpful program, giving us the rundown of what we need to know.”

After training at Temple for a few days, Goldberg will travel to Israel and take part Israel Connect, a mini birthright trip, he explained. He has long awaited the chance to take a birthright trip — twice in the past two and a half years, he has had trips canceled due to the coronavirus pandemic.

“I saw this internship opportunity,” Goldberg said of the Maccabi program. “I was really excited about it, because it gives me another shot to go to Israel, and it advances my career.”

Following Israel Connect, and the Maccabiah Games’ opening ceremony, Goldberg will be stationed in Haifa, a city north of Tel Aviv. “I’m going to be doing a bunch of different things,” he said, “whether it’s play-by-play, writing articles, helping with social media presence, being a cameraman, making packages, doing interviews with athletes — I’ll be given the opportunity to do basically everything that I love doing.”

Aside from his international pursuits, Goldberg is the on-air reality beat reporter for “Unpeeled,” an entertainment show on Citrus TV, Syracuse’s student television network.

“Syracuse has been amazing to me,” he said. “I was told by so many people, you know, not in the newspaper business, but the TV business especially, a lot of people are very selfish,” he said. “That’s not the case at Citrus TV — everyone’s so nice, giving me an opportunity, and I’m so thankful.”

Goldberg, who has also long been a fan of professional wrestling, added that he has a job doing play-by-play with PWK, for Professional Wrestling King, an independent wrestling promotion network based in Indianapolis. With shows taking place quarterly, Goldberg will call his first one on June 8.

He is unsure which sports he will be covering at the Maccabiah Games, but he said it would be cool to cover lower-profile sports such as fencing, Brazilian jujitsu or wrestling. “I feel like I would have a lot of fun doing things like that — they have everything there,” he said. “But I’ll take whatever is given to me, with a smile on my face, because I’m just thrilled to be there.”