Model trains and class reunions: friendship in the wake of Covid-19 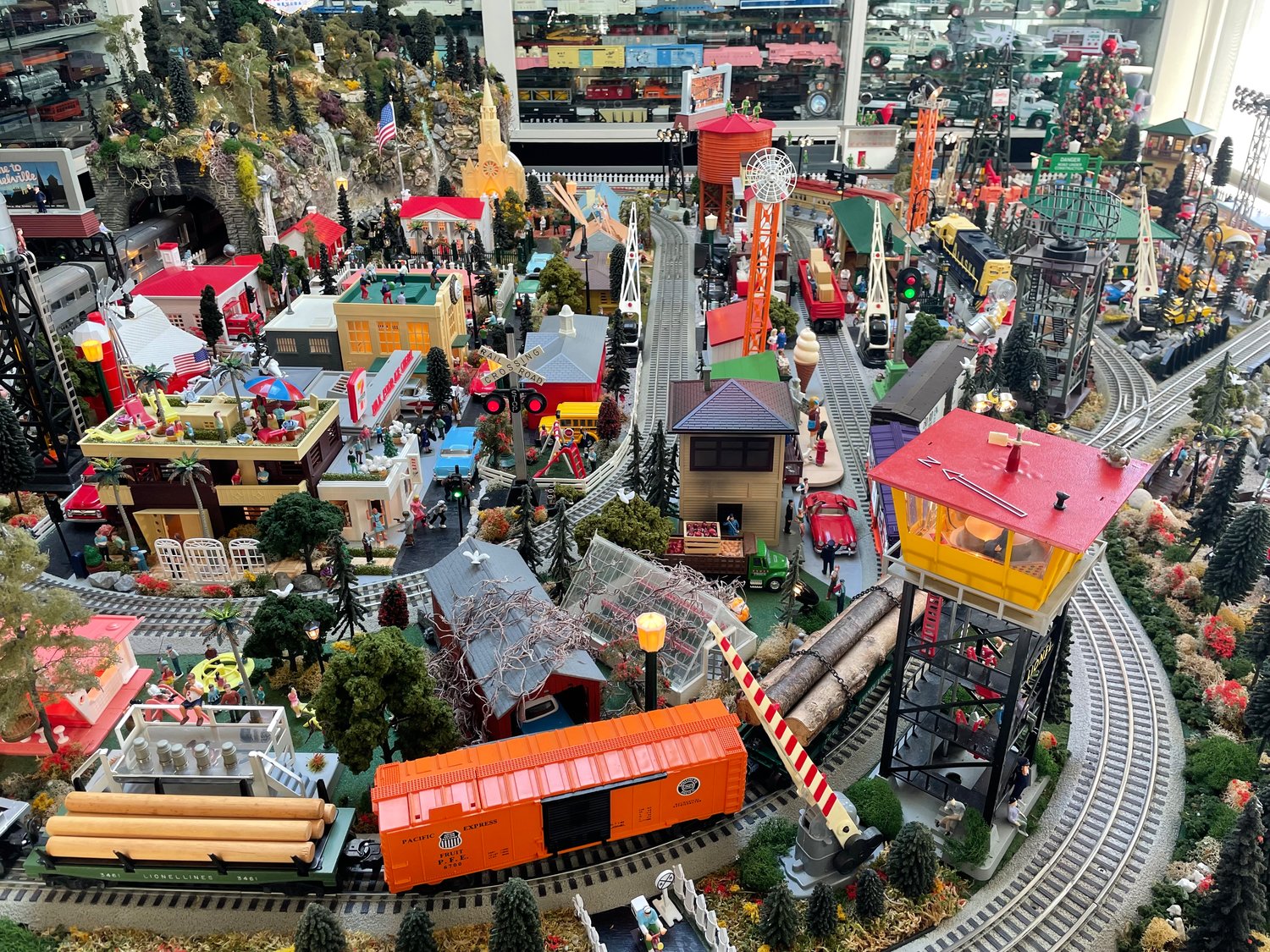 Bellmore resident Gary Gaccione nearly died in 2020, after a long battle with Covid-19. In his recovery at home, he connected with friends from the past and present, and created an impressive Lionel model train display.
Jordan Vallone/Herald photos 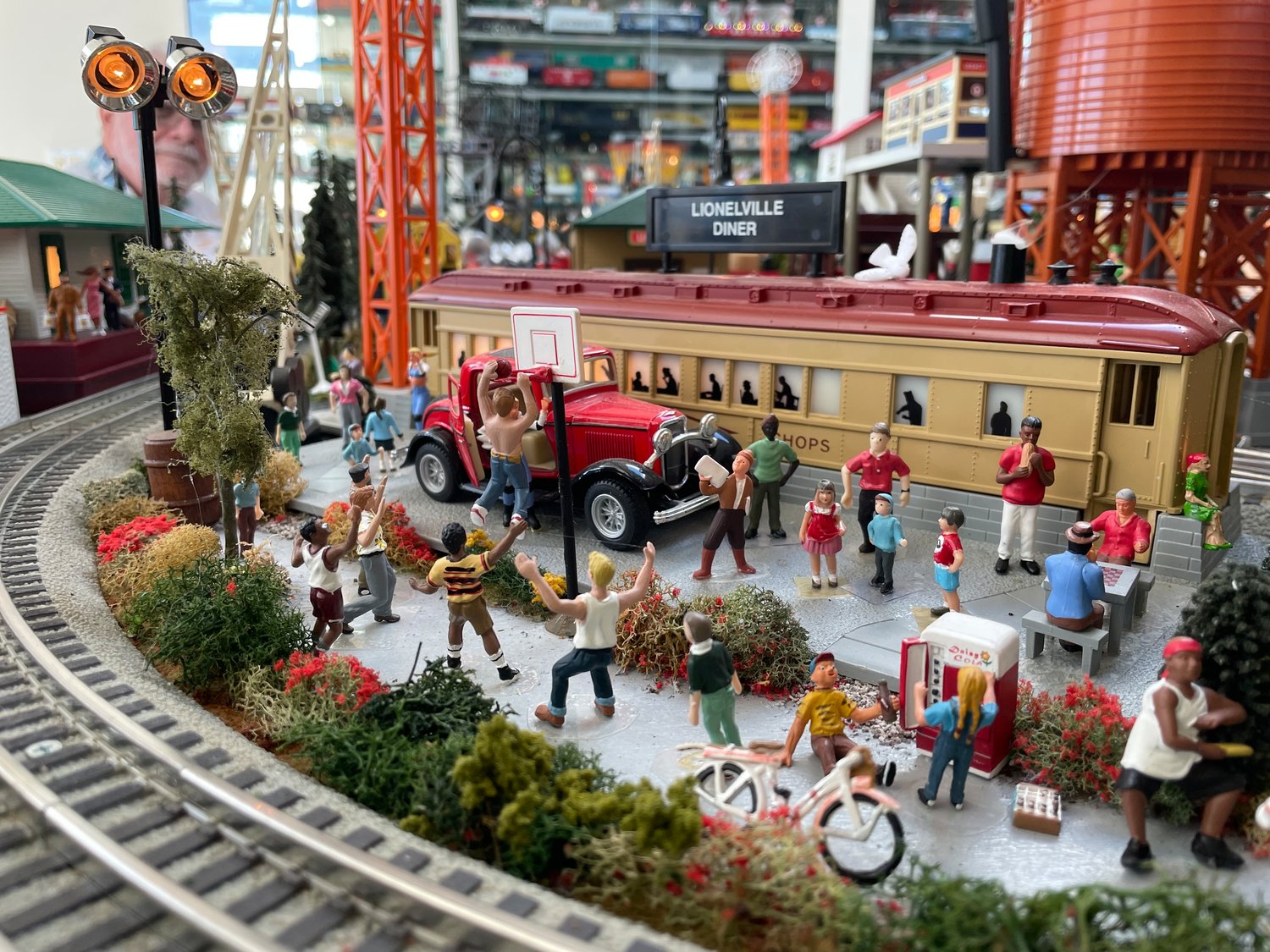 Always a creative person, Gary Gaccione inspired many when he was an art teacher in the North Bellmore School District. That creativity was directed into his intricately detailed display. In back, Gaccione sat at a switchboard, controlling its electronics.
Jordan Vallone/Herald photos
Previous Next

People are in different areas of creativity, but they all talk the same language.”
Gary Gaccione
By Jordan Vallone

When Gary Gaccione was diagnosed with Covid-19 in March 2020, he didn’t know if he was going to make it.

“When I was in the hospital the first night, I said to the doctor, ‘Am I going to be OK?’” Gaccione recounted. “I myself didn’t realize how bad Covid was. He said, ‘I don’t really know. I can’t tell you — I can’t lie to you.’”

Gaccione, a former North Bellmore School District art teacher, spent many weeks at the hospital, and then more in rehab, before he was finally able to come home that May, on oxygen and for the most part confined to his house.

That was over two years ago.

His is a story of resiliency, Gaccione said, and how you handle what life gives you.

In the wake of some of his darkest days, and the recovery that followed them, Gaccione took time to rediscover himself, re-form connections with people he’d known in the past, and look toward his hopefully brighter future.

For 45 years, Gaccione has lived next door to Frank Martucci, and they’d always had a good, neighborly relationship. In the first weeks after Gaccione came home, they struck up a conversation about, of all things, model trains. It turned out that they both collected Lionel trains, and Martucci had even built a layout in his basement.

The neighbors saw this connection as the perfect time to build not only a display for Gaccione, but also a friendship. Gaccione had a room in the upper floor of his Bellmore home where much of his model train collection was in display cases along the wall. When the two men decided to build a train display, their vision was simple.

“The very first thing we did was make the track plan,” Gaccione added. “And then we started to fill it.”

Over the next eight months, that table came to life, with all sorts of features, from houses and buildings to multiple tracks, and of course, trains.

The trains, and some of the buildings, were directly collected or purchased from Lionel, the men explained, but some of the figurines, plants, rocks and tunnel systems were fashioned out of materials they found in craft stores, and even their backyards.

“When you start off, you know, it’s overwhelming,” Gaccione said. “What we did is, we said, look, we’re going to do a little at a time, and just concentrate on each section. And it kind of built itself.”

Every time you look at the display, you see something new. From a wedding outside of a church, to prisoners apparently doing community service work in the “hills,” the display depicts the good and bad of everyday life.

“I had all this time on my hands, and, you know, the thing is, we became very good friends,” Gaccione explained. “We’re not just saying hello to each other anymore, we’re sharing a hobby. And that’s how it all happened.”

When Gaccione was an art teacher at the now-closed Jacob Gunter Elementary School in North Bellmore, he started a program called Blue and Gold, which later became known as the Creative Arts Program.

He began his teaching career in the 1969-70 school year, and saw students sitting around, bored, at lunchtime. So Gaccione asked the principal if he could start a program in which students created a play during their lunch hour.

The principal questioned his proposal, because Gaccione had no formal background in teaching theater. “I said, ‘I’m not going to teach them — we’re going to learn together,’” he recalled. “We’ll come up with a theme, and create it as we go.”

The program grew, and by 1979, the district asked Gaccione to teach it in all give of its elementary schools. It was so popular that The New York Times wrote about it — twice.

Gaccione said he saw the creative potential in all his students. “People are in different areas of creativity,” he said, “but they all talk the same language.”

When he was battling Covid, many of his former students found out, and he received an outpouring of love and well wishes. A Facebook group was created so they could reconnect with one another and their beloved teacher.

His students are still in touch, and are even planning a reunion, at the Merrick Golf Course on Oct. 8.

“You changed the dynamics of art in our little school in North Bellmore,” former student Kristen Sayers Parker wrote to Gaccione. “You took an art department teacher position and changed not only what the arts mean in schools, but the lives of thousands of children over your tenure.”

Gaccione retired in 2005, and his program faded out of the district with him. But he still remembers those days fondly — and the lessons he taught. That creativity he inspired in his students, all these years later, came through in his train display.

“When you’re an artist, you have a voice,” he said. “People listen to people who are artists — they have a voice, and have a way of telling people what’s going on, or what could be better.”