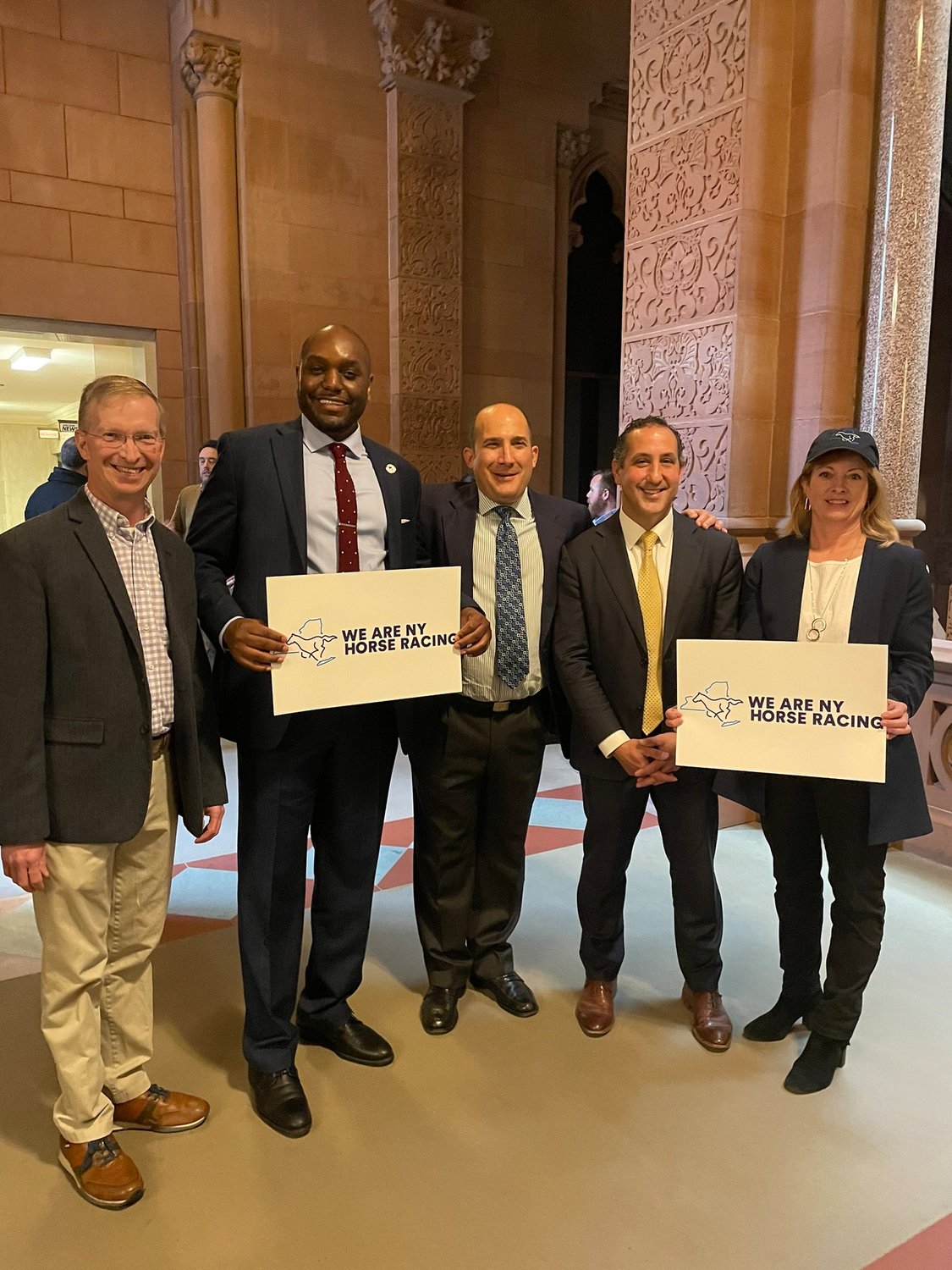 Todd Shimkus, left, of the Saratoga County Chamber of Commerce, Naija Thompson of New York Thoroughbred Breeders, Joe Appelbaum of the New York Thoroughbred Horse Association, Jeff Cannizzo of the New York Racing Association and Heather Mulligan of the Business Council of New York travelled up to Albany to voice their support for the Belmont modernization project.
Courtesy We Are NY Horse Racing
By Ana Borruto

Community leaders and horse racing enthusiasts are urging state legislators to go to the whip for Belmont Park and give their approval for a major upgrade at the racetrack.

Representatives from We Are NY Horse Racing visited Albany last month to encourage state leaders to approve a $455 million redevelopment project for Belmont Park racetrack, at 2150 Hempstead Turnpike in Elmont.

If approved, the project would require Belmont Park essentially to be torn down, built back up from scratch and transformed into a winterized horse racing facility complete with a new clubhouse and grandstand — all at no cost to taxpayers, according to the New York Racing Association (NYRA). The NYRA plans to borrow the money and pay it off over the span of 30 years through state-backed bonds.

The NYRA would be responsible for all debt service obligations on the bonds and no taxpayer funds would be used for the project. Since the state owns Belmont Park, the NYRA would essentially be spending its own funds for the modernization project.

“It really is this economic engine for New York State, “ said Jack Sterne, a spokesperson for We Are NY Horse Racing. “There hasn’t been any real major project down at Belmont in over 50 years. If we do modernize it, we’re going to be able to supercharge that impact for the entire state.”

Founded in September 2021, We Are NY Horse Racing is a coalition of small businesses, labor unions, non-profits and trade associations. Sterne and the other more than 50 members have spoken with lawmakers, participated in legislative hearings and hosted grassroots events to inform the public about the impact of horse racing on the state economy.

The coalition has launched a full-fledged campaign to secure the funds necessary to reconstruct Belmont Park. Sterne said the goal is to urge state lawmakers to make the park’s redevelopment a top priority when they reconvene in 2023.

“Modernizing Belmont Park is a transformational project that would establish one of the finest sports and entertainment destinations anywhere in the country, especially when coupled with the new UBS Arena next door,” Patrick McKenna, NYRA’s vice president of communications, said. “NYRA appreciates the hard work and support of the We Are NY Horse Racing coalition, whose membership recognizes the importance of a new Belmont Park for the future of thoroughbred racing in New York and the state economy overall.”

Sterne added that 19,000 state jobs are created and sustained, thanks to the sport of horse racing, and has a $3 billion annual economic impact on the state. The project could also lure the Breeders’ Cup world championship — which he described as the Super Bowl of horse racing — back to New York. The last time the event was hosted at Belmont Park was in 2005 and has not returned due to the venue’s aging infrastructure.

“We secured a commitment from the Breeders’ Cup that if Belmont is modernized, they will come back to New York, and that would have an estimated economic impact of $100 million,” Sterne said.

“We’re trying to be first out of the gate to talk about this issue, both on Long Island, across the rest of the state, and specifically up at Albany.”

According to a poll released by We Are NY Horse Racing, 68 percent of voters statewide and 75 percent of voters on Long Island support using the state bonding authority to construct new horse racing facilities at Belmont Park.

Julie Marchesella, president of the Elmont Chamber of Commerce, said she supports the modernization of Belmont Park, which she said is “in a state of disrepair” and needs to be updated.

“From what I understand, there are toilets that don’t work, it’s not handicap accessible, which certainly, in this day and age, it should be,” she said.

Legislator Carrie Solages said he also supports the redevelopment of Belmont Park, as long as the project doesn’t negatively impact the Elmont community. He said the project would generate economic benefits for the area, but he has received concerns about the construction process.

“My main concern is that the community has a say in this project,” Solages said, adding that community residents should have an opportunity to get jobs from the project and be able to address quality of life and transportation issues.

Marchesella added that most people don’t realize Belmont is a public park with facilities that can be used for picnics and other gatherings, and a revamp of the area could draw in more visitors.

“I think with the clubhouse being redone, it would certainly bring more people into the community and see that part of Elmont that they don’t always get to see,” she said.