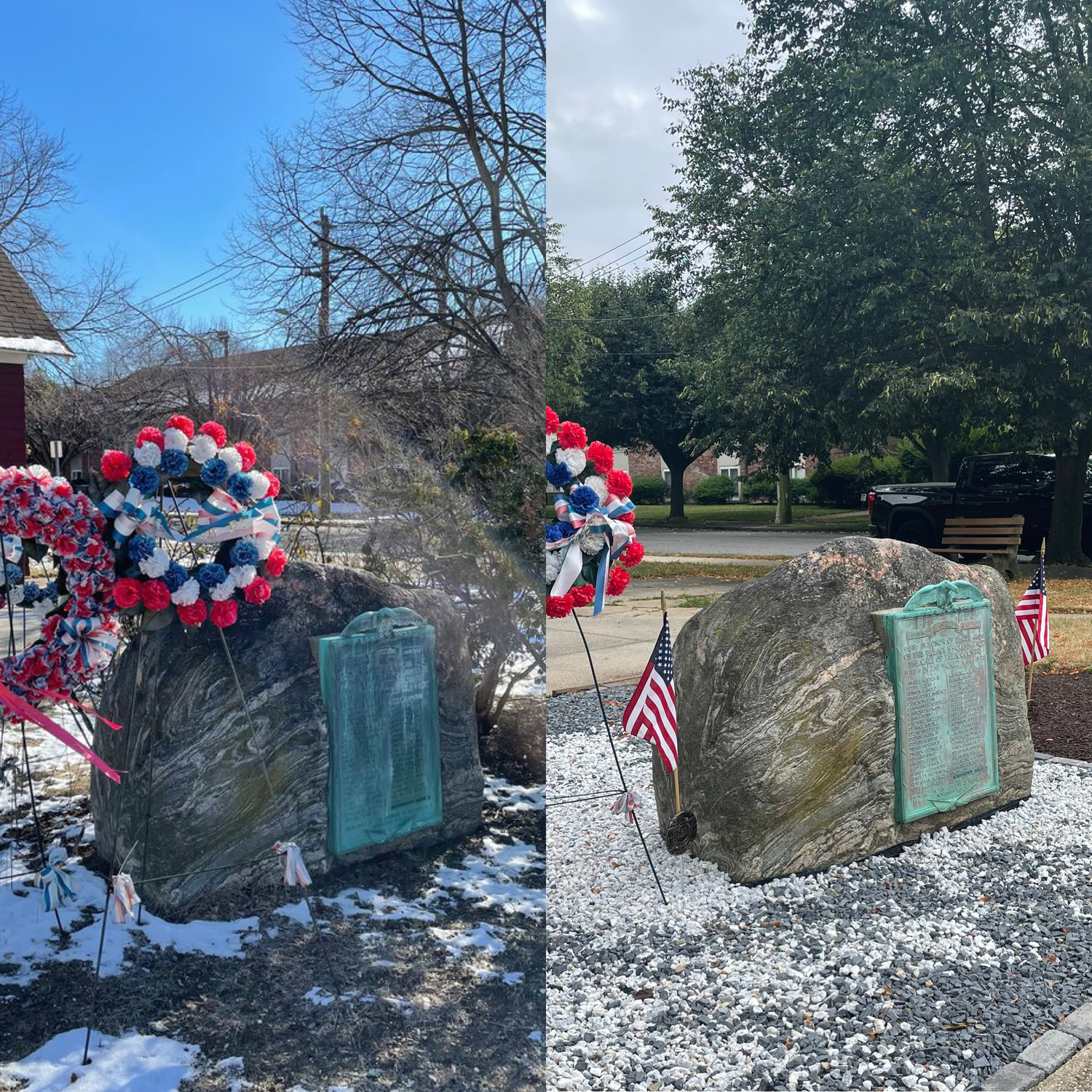 A World War 1 Memorial in front of the Old Merrick Library was recently restored. Brandon Goldstein, 16, a Boy Scout who is working on his Eagle rank, worked with Jewish War Veterans Post 652 to revive the marker. Above, the memorial in February, left, and after the restoration, right.
Courtesy Gary Glick 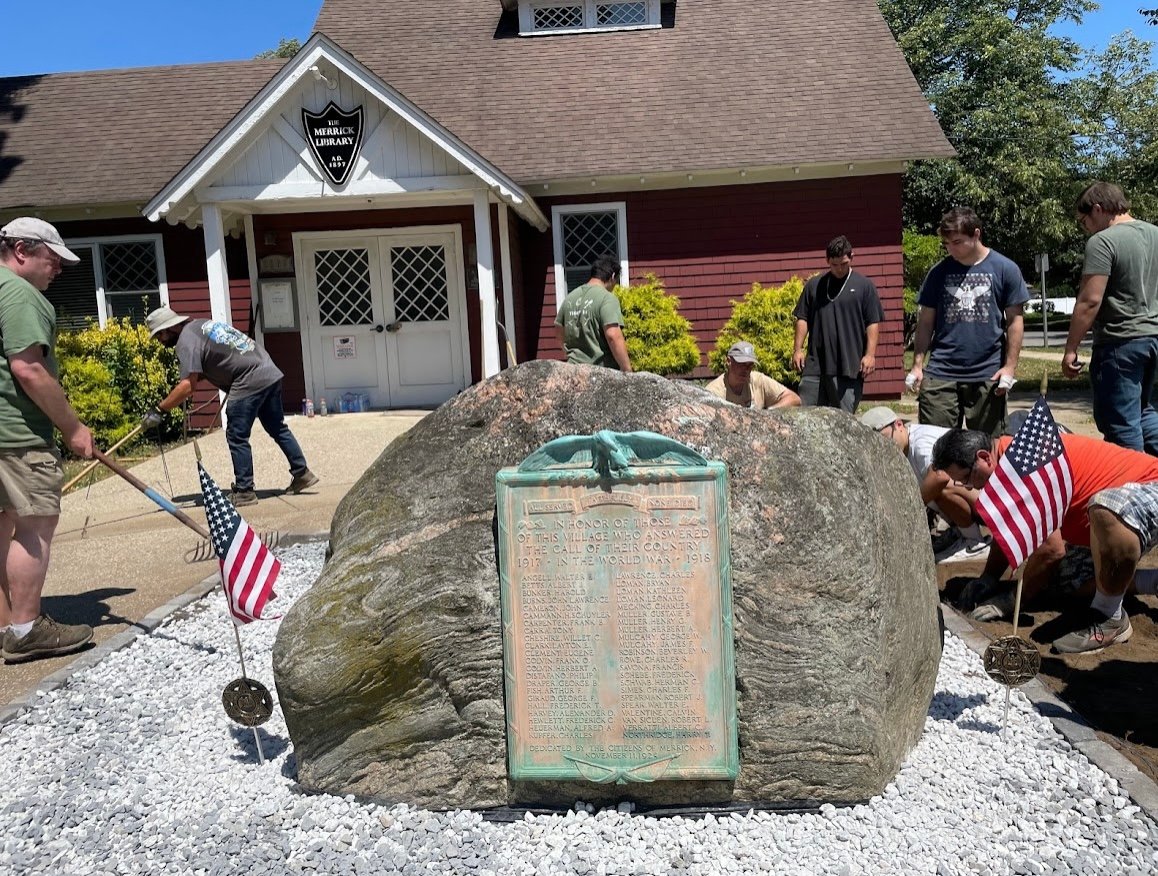 The grounds surrounding the memorial were cleaned earlier this month. Brandon Goldstein worked with his troop, family and friends to create a rock garden, remove garbage, and lay new mulch.
Courtesy Gary Glick 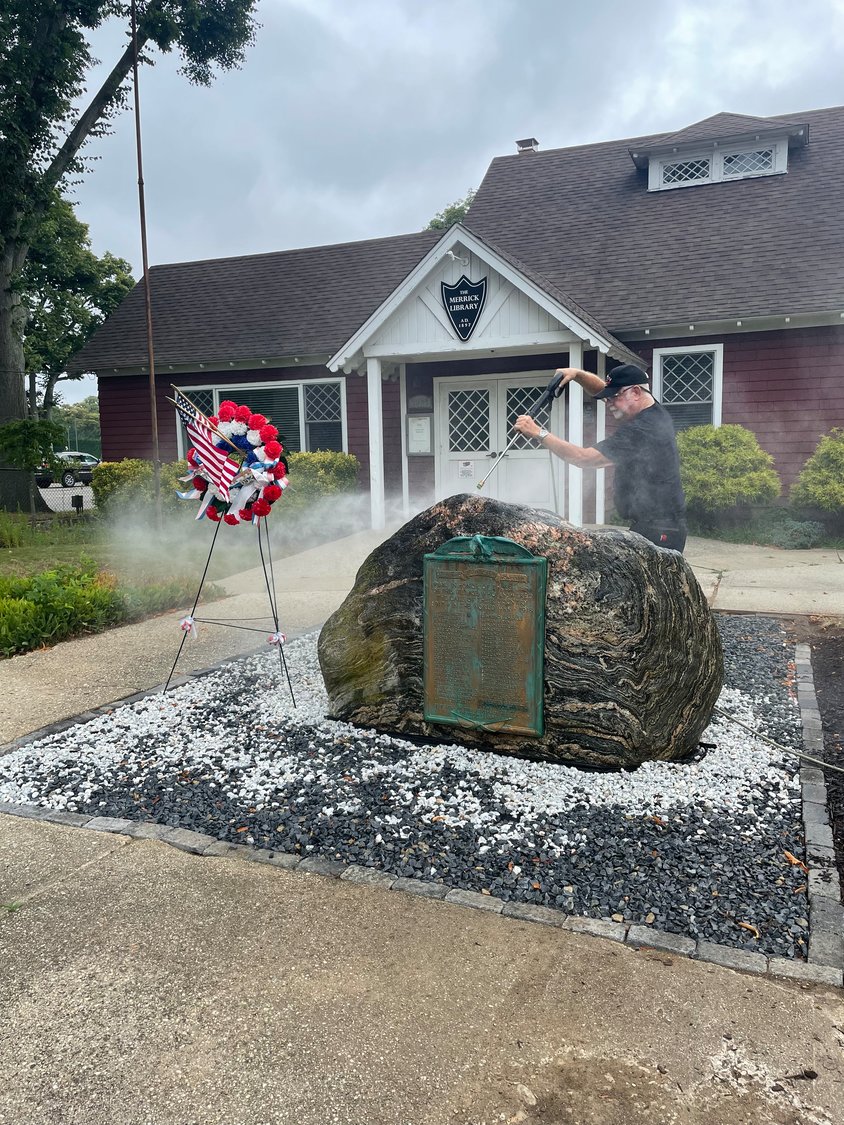 Eric Spinner power-washed the rock that holds the plaque to remove mold, moss and patina, a green film that forms naturally on copper or brass.
Courtesy Gary Glick
Previous Next
By Jordan Vallone

In front of the original Merrick Library, on Merrick Avenue, stands a World War 1 Memorial that, since it was dedicated in 1924, has seen many years of neglect.

The memorial features a plaque with a list of names that was covered in patina, a green film that forms naturally over time on copper and brass. The plaque is attached to a large rock, and was surrounded by unmaintained plants.

Brandon Goldstein, 16, a rising junior at John F. Kennedy High School in Bellmore and a Boy Scout working toward his Eagle rank, made it his mission to upgrade the 98-year-old landmark. Goldstein worked with Jewish War Veterans Post 652 of Merrick on the project.

“My scouting career began at 10,” Goldstein said. “My older brother is an Eagle Scout. I fell in love with the idea of going out and helping out the community.”

Goldstein, of Merrick, is a member of Troop 214, in Rockville Centre. His father, uncle and brother were members of the troop, so he joined it, too.

The Old Merrick Library is a state and Town of Hempstead Historical Site. The Historical Society of the Merricks, currently run by Acting President Joe Baker, is considering turning part of the building into a one- or two-room museum. Goldstein said that he read the story “Historical society mulls turning old Merrick Library into museum” in the Feb. 24-March 2 issue of the Herald about the museum proposal, and learned that Gary Glick, the JWV post commander, wanted to restore the memorial on the library’s grounds. Goldstein contacted Glick and Baker, who were receptive to his idea of organizing the effort for his Eagle project.

Goldstein proposed cleaning the memorial, adding a rock garden, collecting trash and laying new mulch. On July 3, after his project was approved, Goldstein, members of Troop 214, and family and friends gathered to begin the work. Due to the nature of the plaque, however, it needed to be cleaned in a certain way. Glick brought in Eric Spinner, a member of the JWV Post 652, to help.

Spinner used a natural solution of salt, flour and vinegar to remove some of the patina on the plaque. Returning to power-wash the rock and the plaque on Monday, Spinner told the Herald that after another treatment or two with the solution, he would use black shoe dye to help make the names stand out, and then add a coat of lacquer to preserve the work.

Though it is a detailed, multi-step process, Spinner said he didn’t mind doing the work. “For me,” he said, “it’s a labor of love.”

“It worked out beautifully,” Glick said of the project. “This is something that is a great community effort.”

Baker said he was looped into the project because of the Historical Society’s proposal for the property. The library is owned by the Merrick Union Free School District, and anything done to the building or its grounds requires the permission of the district superintendent, Dominick Palma. But the credit for the memorial restoration, Baker said, goes to Goldstein and the JWV.

“There’s been a lot of compliments from residents,” Baker said. “They’ve never seen it look so clean. That building is coming alive.”

As the work of restoring the plaque wraps up, Glick said that in the future, he’d like to try and find residents who are descendents of the 44 men and women whose names are on the plaque.

Though his project has been completed, Goldstein is not yet officially an Eagle Scout yet. He is required to create an Eagle Binder, which includes a full write-up of the work that was done, and have it evaluated by an Eagle Board of Review before the project can be certified by the national Boy Scout office. Goldstein said he was unsure when he would receive official word.

For now, he said, he is just happy to have made a difference in his community. “It was nice to see the community restore a memorial,” Goldstein said. “It may not be a huge project, but it has a lot of sentimental value to people like Gary and the Jewish War Veterans, who’ve put their life on the line for this country.”

The original library, and the restored memorial, are at 2369 Merrick Ave. in Merrick.