A picnic full of fellowship and friendship 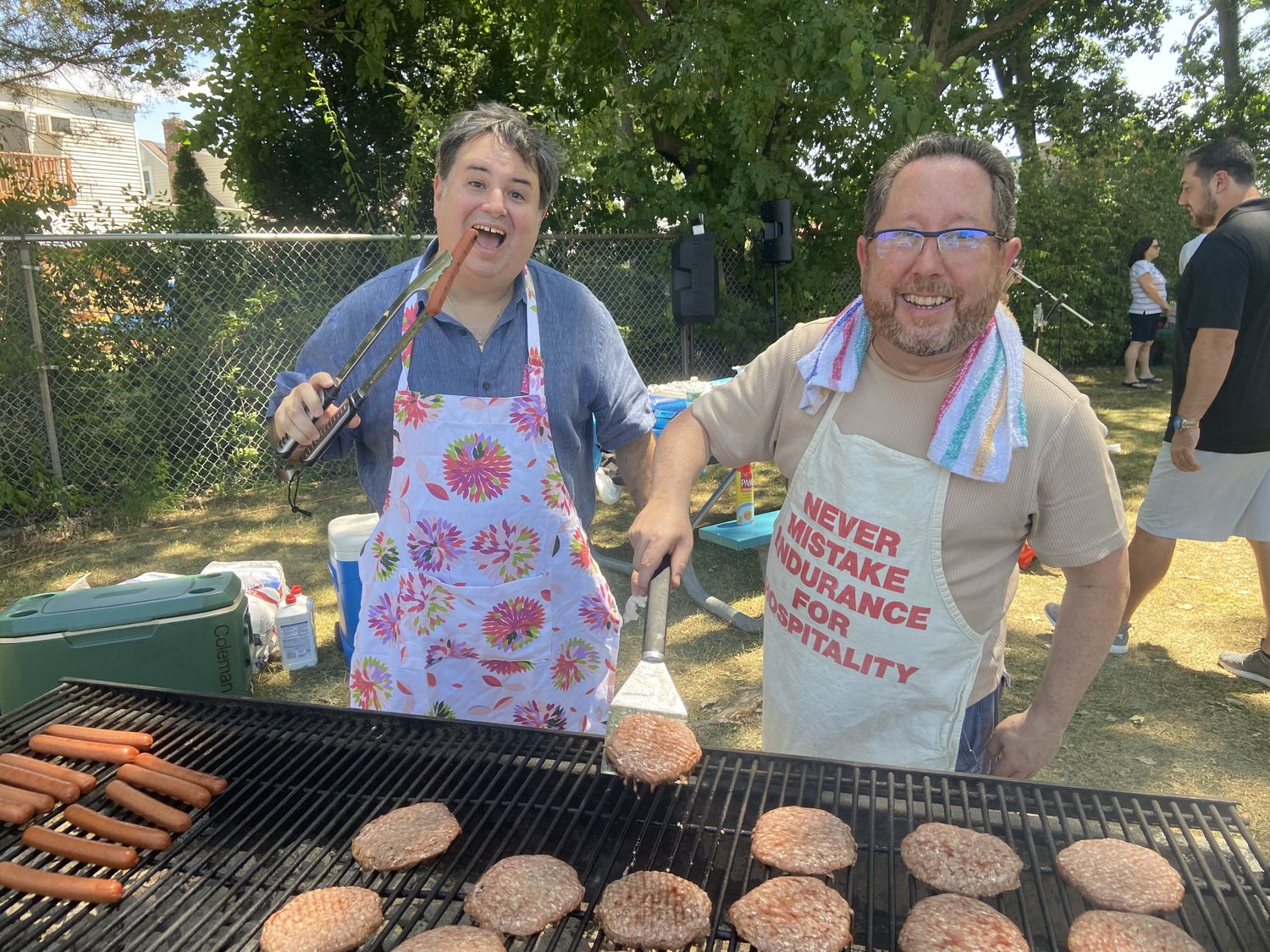 Ross Schiller, left, and Eric Vogel were chef-ing it up at the picnic on July 23.
Mallory Wilson/Herald 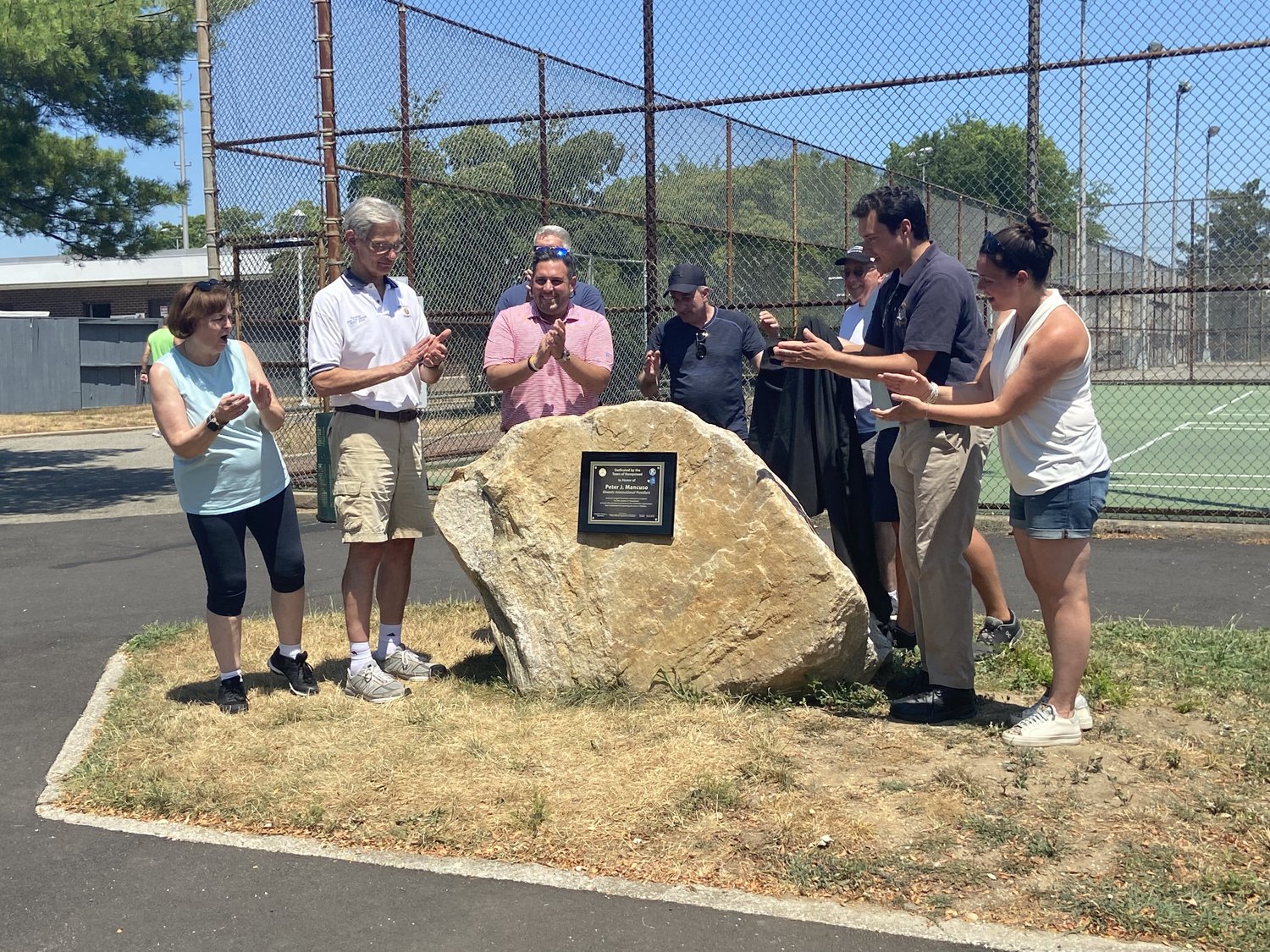 A special boulder with a permanent placard dedicated to Kiwanis International President and former East Meadow Kiwanis President Peter Mancuso was unveiled near the bocce courts in Veterans Memorial Park. 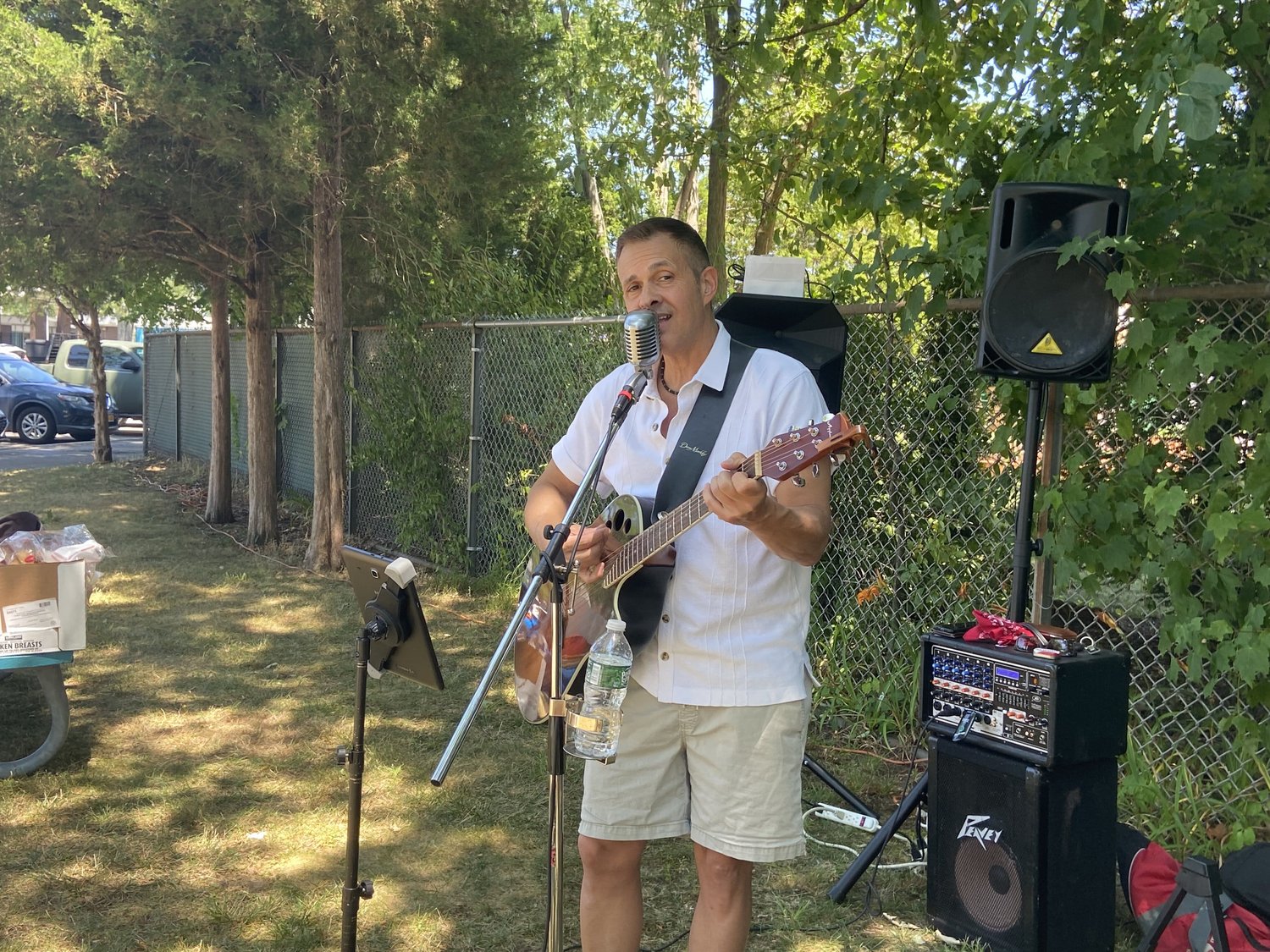 James Castelli delighted the picnic crowd with some singing and guitar playing. 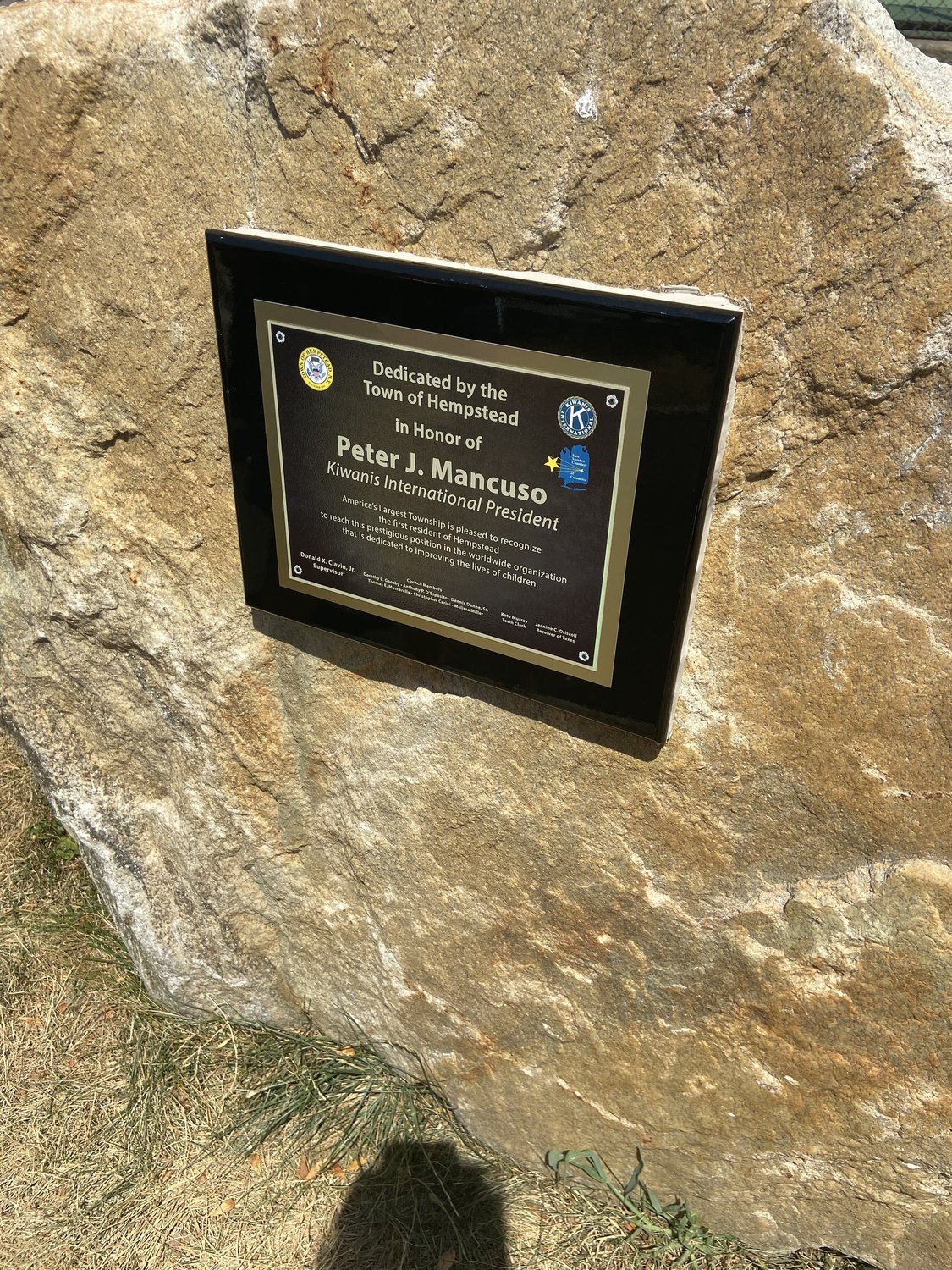 The placard and boulder has been in the works since last October. 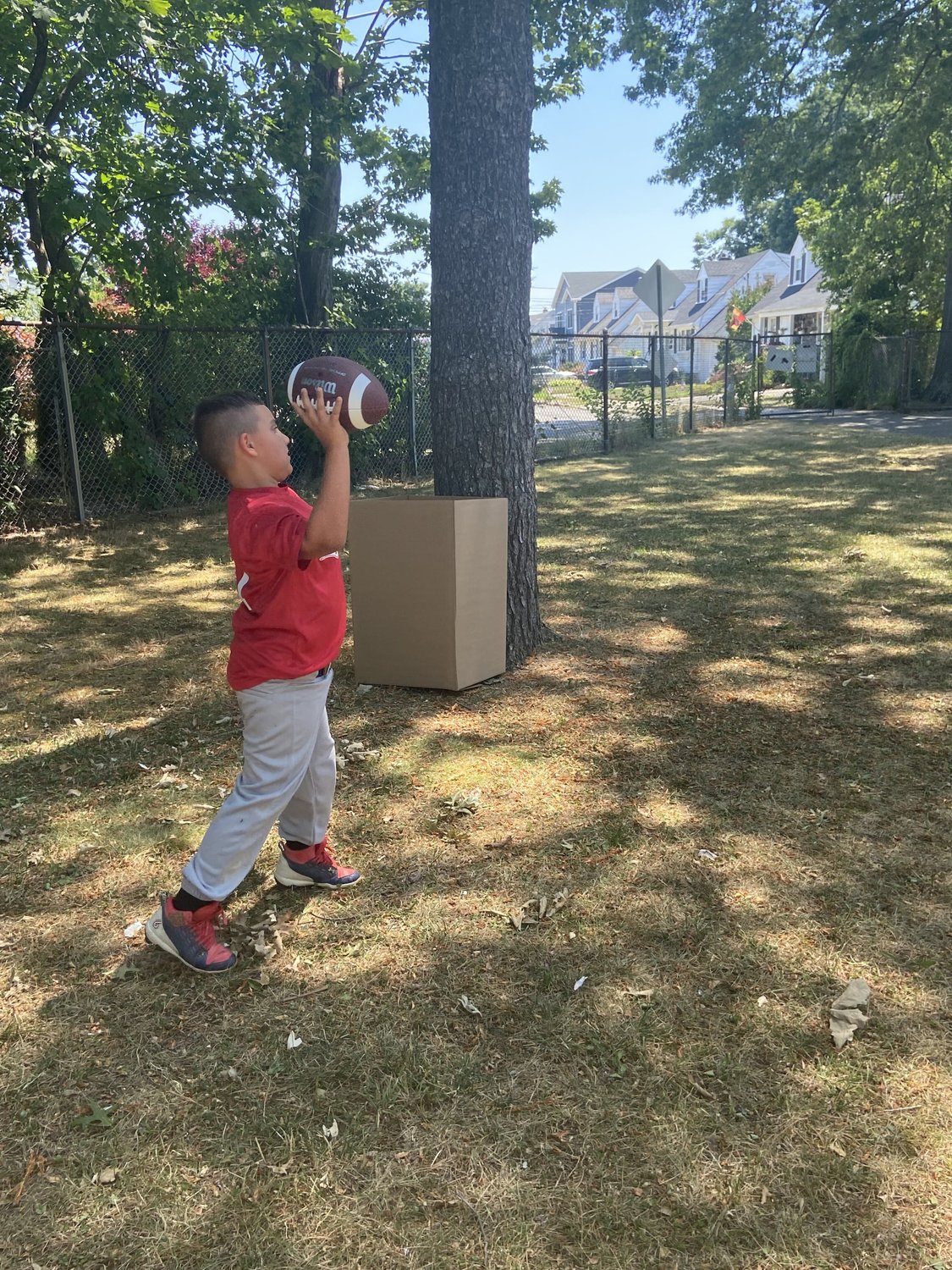 Christian Krug enjoyed a game of football after winning his little league game.
Previous Next
By Mallory Wilson

On a hot July day, members of the East Meadow Chamber of Commerce and East Meadow Kiwanis brought their families to Veterans Memorial Park for their annual picnic. Members new and old gathered at the park on July 23 to enjoy some good food, music, and conversation.

“It’s such a nice way for people to get together and talk, that’s really what it’s all about,” Ross Schiller, a long-time member of Kiwanis and the Chamber said at the picnic. “My favorite part of the picnic is just the people.”
Both organizations used to hold their own picnics separately, but since there was so much overlap in members and activities held together, they combined it.

“It’s great to be here with no pressure and enjoying each others company and the fellowship,” Brian O’Flaherty, a long-time kiwanian said. “We work hard all year raising funds and doing service and this is the part where we can kick back and enjoy each others company.”

O’Flaherty said that he liked that the picnic was held at Veterans Memorial Park this year rather than its usual spot of Forest City Park in Wantagh. “It’s great to bring it back local,” he said. “I want to bring the picnic back home.”

This year, there was a special boulder with a permanent placard dedicated to Kiwanis International President and former East Meadow Kiwanis President Peter Mancuso.

The boulder was in the works for months after three new bocce courts were unveiled in October as part of the renovations for the park.

“What we’re looking at right here used to be trees that were on their way out, concrete that was completely disheveled, into this beautiful Peter J. Mancuso bocce court you see today,” President of the East Meadow Chamber of Commerce Richie Krug Jr., said. “Thank you very much for being a pinnacle of leadership that I look up to every day, as I serve the community.”