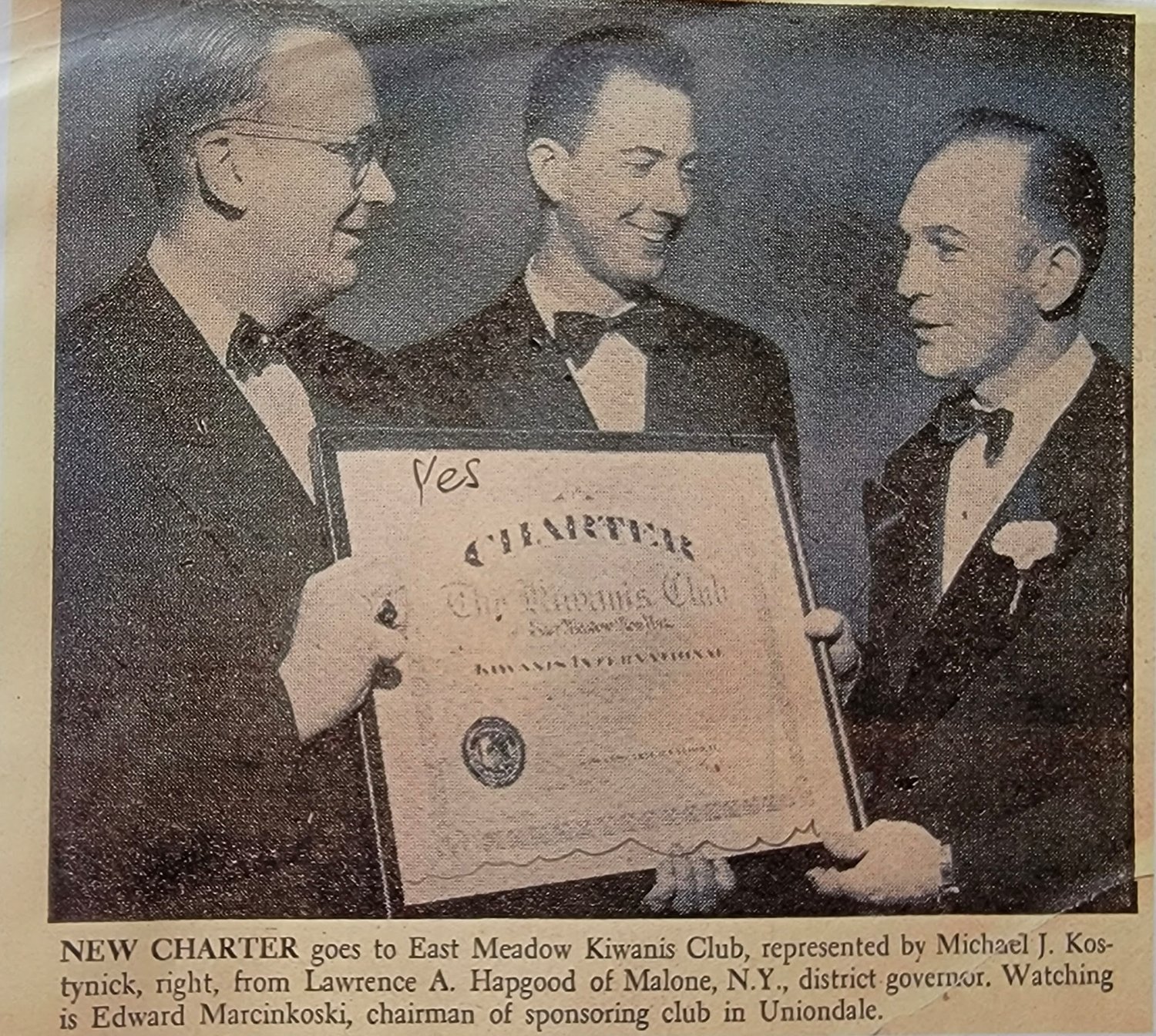 East Meadow Kiwanis was first chartered in 1952, and this year the club celebrated its 70th anniversary.
Courtesy Kevin Kamper 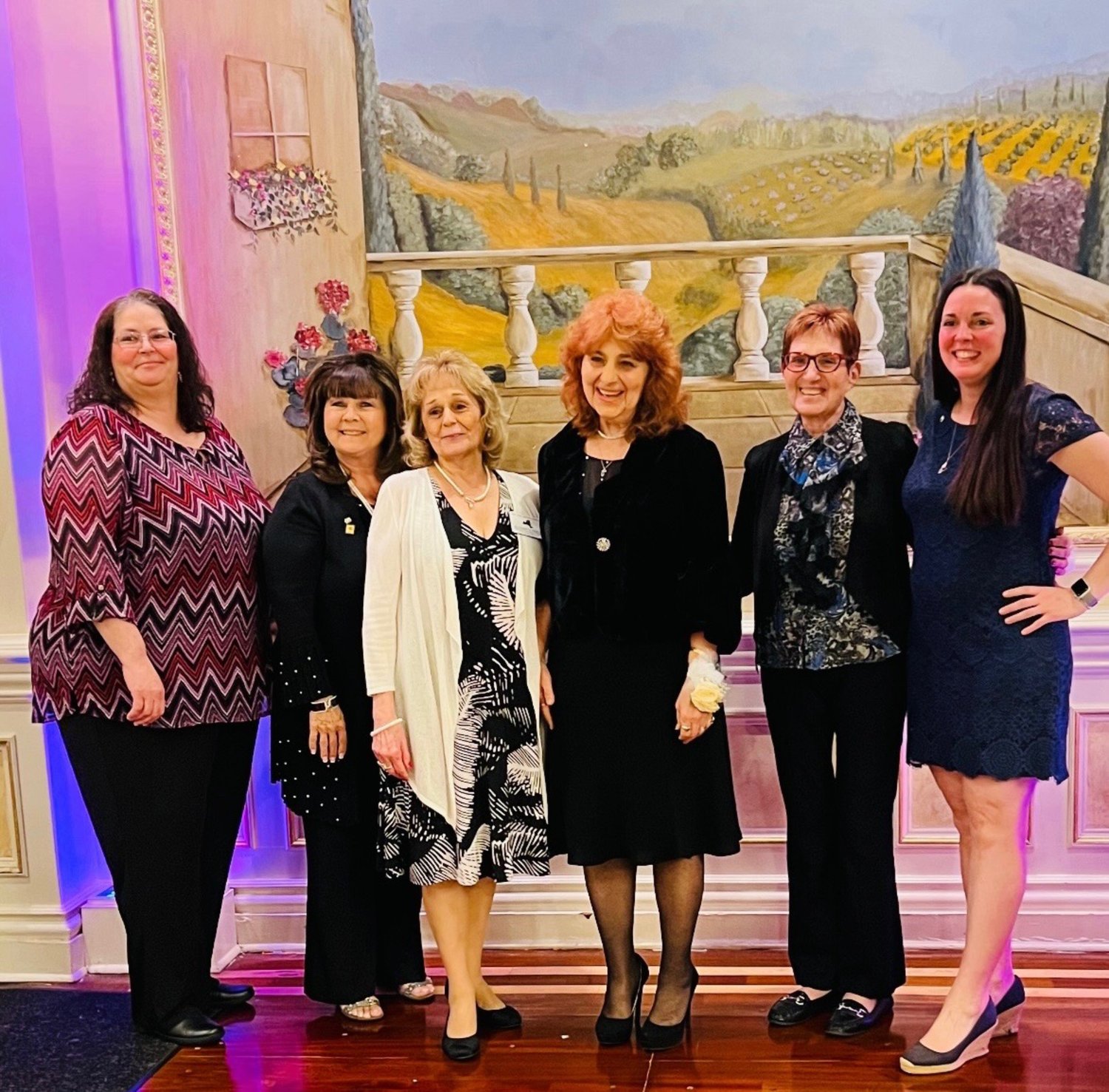 The Club had a celebratory brunch last Sunday, and plenty of past presidents were in attendance, including, from left, Lisa Hallet, Debbie Kirsch, Liz Fries, Joni Blenn, Marcee Rubinstein and current club President Jennifer Reinhardt.
Courtesy Jennifer Reinhardt
Previous Next
By Mallory Wilson

When Peter Mancuso, a 35-year East Meadow Kiwanian, went to his first Kiwanis meeting in 1987, he said that he found a room full of quipsters. “We were all packed on top of each other, and everybody had a good sense of humor,” Mancuso recalled.

His reaction is confirmed by pretty much anyone who attends East Meadow Kiwanis meetings even now. The difference is that now the club meets at local spots like Borrelli’s Restaurant and the Grand Stage Diner instead of Potter’s Pub, the local watering hole that closed in 2013.

“It was therapeutic in the beginning,” Mancuso said. “It was therapy to come there and spend an hour and a half with these people on a Tuesday night, and just have a lot of laughs and have a lot of fun, and have the sense that you were doing something worthwhile at the same time.”

Tom Gallagher, a member since 1990, has similar recollections of his first meeting. “We got down to the meeting, and people are giving happy dollars and they’re all singing, and I was like, what the heck is this?” he said. “Then all of a sudden you become that same dork.”

The East Meadow Kiwanis Club has served the community since April 29, 1952, hosting multiple fundraisers throughout the year to foster community-mindedness and helping those who need it. The first meeting was at the Keyhole, a restaurant on East Meadow Avenue, which is now Majors Steakhouse.

The club celebrated its 70th anniversary last Sunday with a brunch at Verdi’s in Westbury. Club members and presidents new and old came out to celebrate the club’s success.

Most people who join are asked to or persuaded by another member, and that is what’s helped the club grow to what it is today, the club with the largest arguably most active membership in the New York State District of Kiwanis.

Mancuso joined because a friend of his named Steve Eisman suggested he join, but he didn’t actually start going to meetings until he took his attorney business into private practice and felt the need to network. That was 1987, and Mancuso hasn’t looked back. Now, not only is he an East Meadow Kiwanis member, he also serves as president of Kiwanis International.

“I love the club and the diversity of the membership,” said Gallagher, who joined at the suggestion of his friend Ted Rosenthal. “The membership is full of like-minded people who want to do good.”

The good they accomplish is through fundraisers such as the annual golf outing, which was named in memory of Steve Eisman and brings in thousands of dollars to send underprivileged kids to sleep-away camp at Kamp Kiwanis, annual pancake breakfasts and spaghetti dinners and back to school drives to provide students with supplies. They raise money for the Kiwanis Pediatric Trauma Center located in Cohen Children’s Hospital in Manhasset and they organize the collection of food for the McVey Mighty Market located in McVey Elementary School.

They sponsor Pride Day, a day full of fun and celebration of community, and give out food baskets during the holidays, just to name a few.

Joni Blenn, who joined in 1989 and was the first woman president of East Meadow Kiwanis in 1997, said that she was recruited to join Kiwanis while she was part-time waitressing at the East Meadow bowling alley. “They told me that this was the first year they would be allowing females and I was skeptical at first,” she said. “When I went down everybody was drinking and smoking and it was a grand old time during and after the meeting.”

There’s a lot of family tradition that runs through Kiwanis, Blenn said. “A lot of kids joined because their parents were in Kiwanis,” she said.

Jennifer Reinhardt, the current president of Kiwanis, joined the club about four years ago at the suggestion of her father, Richie Krug Sr. “He thought that it would be a good fit for me,” Reinhardt said. “Turns out he was right.”

She stayed in the club, though, for the service. “I absolutely love the service that we do,” she said. “I love the food drives and baskets and whatever we provide for the communities that we serve.”

The club has grown over the years and now has about 130 members. They meet Tuesday evenings. “It’s always nice to get asked about what Kiwanis is,” Reinhardt said. “I get to give my little elevator pitch on what we do and why we do it and get people to understand that we are a service organization and serve our local community.”