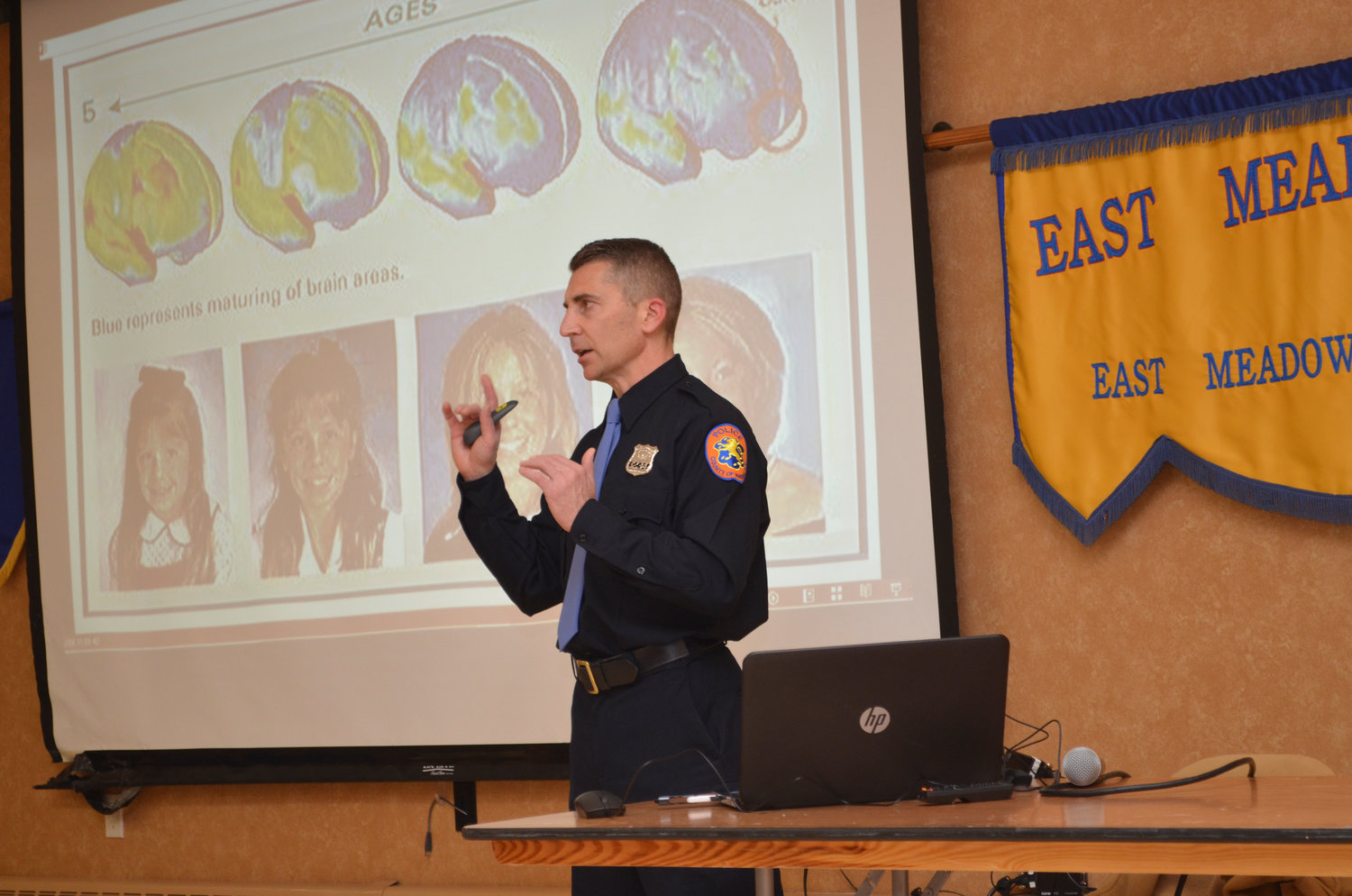 Police Officer John Obert-Thorn led the discussion on drugs and how to stay safe on April 28.
Tim Baker/Herald
By Mallory Wilson

The Council of East Meadow Community Organizations held a forum called “Keeping our kids drug free” on April 28. The forum aimed to educate parents and teens on how to be aware of drugs and drug use and how to stay away from the peer pressure to do drugs.

“Drug abuse continues to plague our community,” Joe Parisi, president of CEMCO said at the start of the forum. “And awareness is one of the tools needed to combat it.”

Novel Psychoactive Substances are the types of new drugs that police officers are seeing in communities nowadays. “There are so many more drugs available to people to take and abuse, whether they know it or not,” Obert-Thorn said. “Every day there is a new one that they found because they’re all synthetically made and brought in mostly from other countries.”

According to the Nassau County Opioid Crisis Action Plan Task Force Report published in 2019, synthetic opioids, like fentanyl, are the main driver of drug overdose deaths in the United States. There were 2,238 deaths reported in 2017 from synthetic opiates, the report stated.

Drug-impaired driving is increasingly becoming a problem, Obert-Thorn added. Drugs affect the eyes’s visual processing and how the eyes move, which, when impaired, causes car wrecks. Opioids cause constricted pupils, he said, and stimulants like cocaine and marijuana cause dilated pupils. Another clue officers use to try to determine if a driver is under the influence is seeing if their eyes move smoothly while following a target or if they move shakily, called a horizontal nystagmus.

Obert-Thorn said one of the main problems of the war on drugs is that people are already drug addicts when they seek help, rather than being educated before the addiction starts. There are four main causes for drug addiction: trauma in a person’s life, early use of drugs while the brain is developing, underlying mental illness and genetics. “These are the big things,” he said. “Kids need to be educated on this.”

Nicotine, cigarettes, vaping, marijuana and alcohol are the products that most adolescents use, he said. And since these are all taken before the age of 24 and 25 when their brain is fully developed, it affects the development of their brain. “Any type of drug completely rewires the developing brain and sets that person up for addiction,” he stressed. 99 percent of addiction starts in the developing brain and most addicts say that they started indulging in those products between the ages 12 to 14.

The chances of becoming an addict are only 1 percent if those products aren’t consumed before the age of 24 or 25.

There are many protocols in place to protect the developing brain from concussion, Obert-Thorn pointed out, but not much is being done to protect the developing brains from drug addiction. “So we’re protecting the brain from concussion,” he said. “We have to start making that emphasis, we have to actually start teaching, the way we do about concussion, about preserving the adolescent or the young adult brain and trying to get them to delay their use of these products.”

The best way to stop addiction, he said, is education. “We have to stress this with our kids, whether it’s from a teacher or a parent, that we have to protect developing brains.”

Richard Howard, the East Meadow High School Principal, who was in attendance at the forum said he stopped by to learn. “I’m always looking to learn so I can bring it back to the schools and bring it back to our teachers,” he said. “I’d like to get [Obert-Thorn] to talk to parents and teachers because some of them have young kids and I think this would be helpful for them.”

Howard said that in health class, which tenth graders take, they learn about the effects of drugs and staying away from them.

It’s so easy to buy vapes online in all different kinds of flavors, Obert-Thorn said, and vaping, either nicotine or marijuana, is on the rise while cigarette smoking is down.

According to Obert-Thorn, studies show that every year that a young adult is kept from using nicotine, alcohol or cannabis, their risk of becoming an addict decreases by 8 percent.

“Follow your gut, follow your hunch, talk to your kids about how it affects the brain,” he said. “Talking about brain development, I guarantee if your kid really understands that concept, they’re going to think twice about taking these products.”