Twenty-one years later, the community still comes together for ceremony 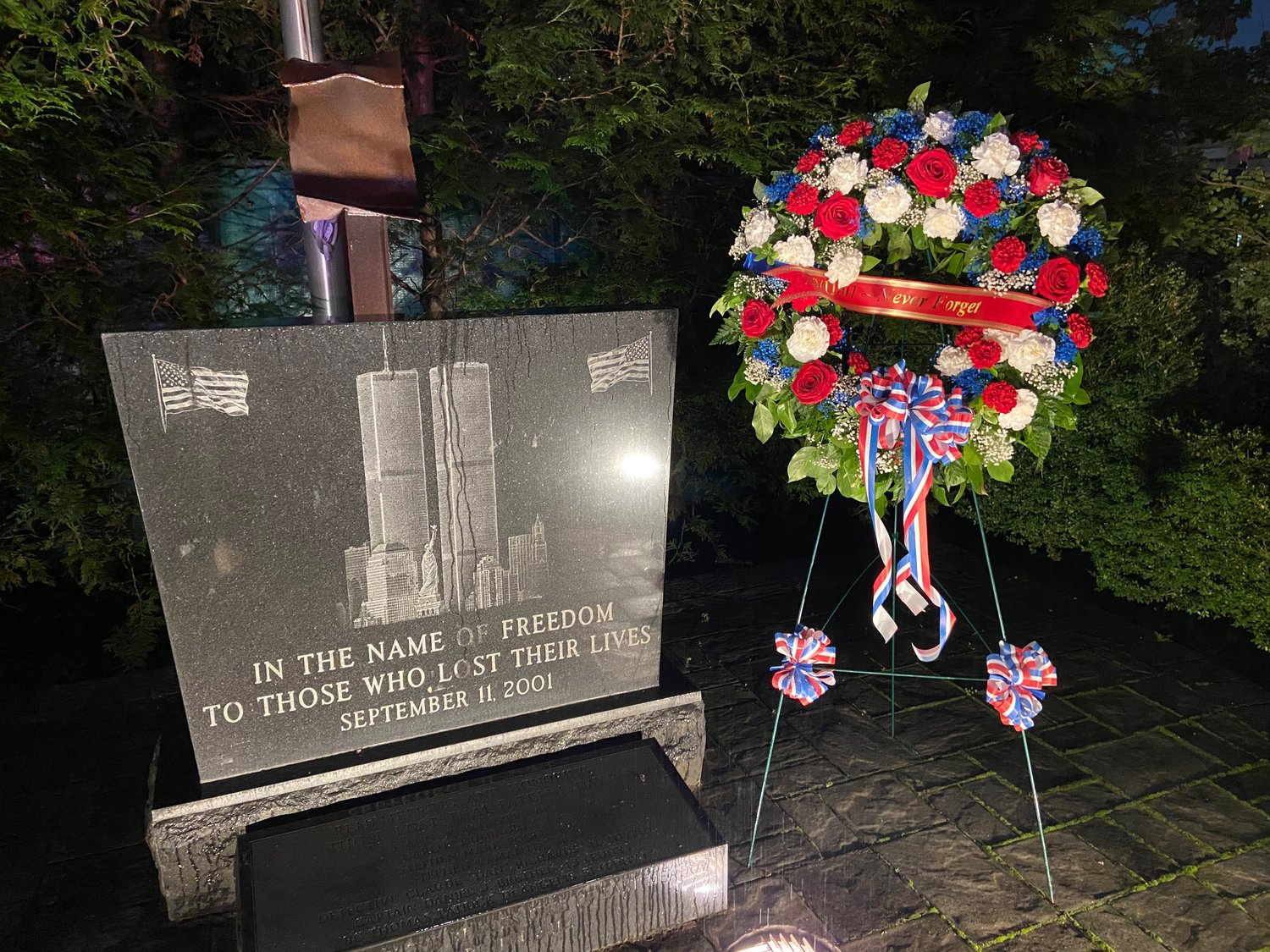 A new wreath is placed each year next to the Sept. 11 memorial in the park.
All photos Mallory Wilson/Herald 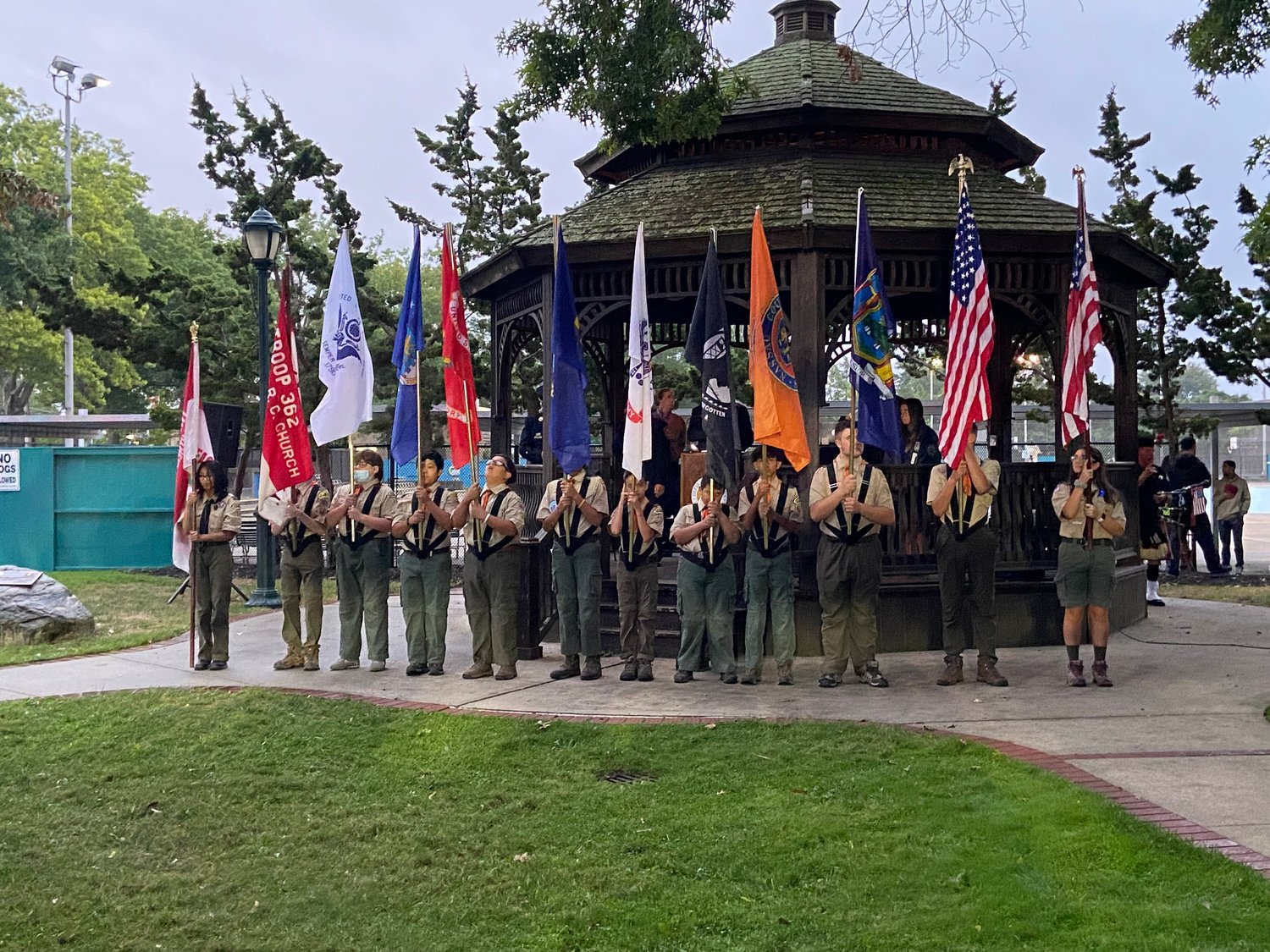 Local Scout’s paid tribute to the lives lost in the terrorist attacks at a memorial hosted by the East Meadow Fire Department on Sept. 11. 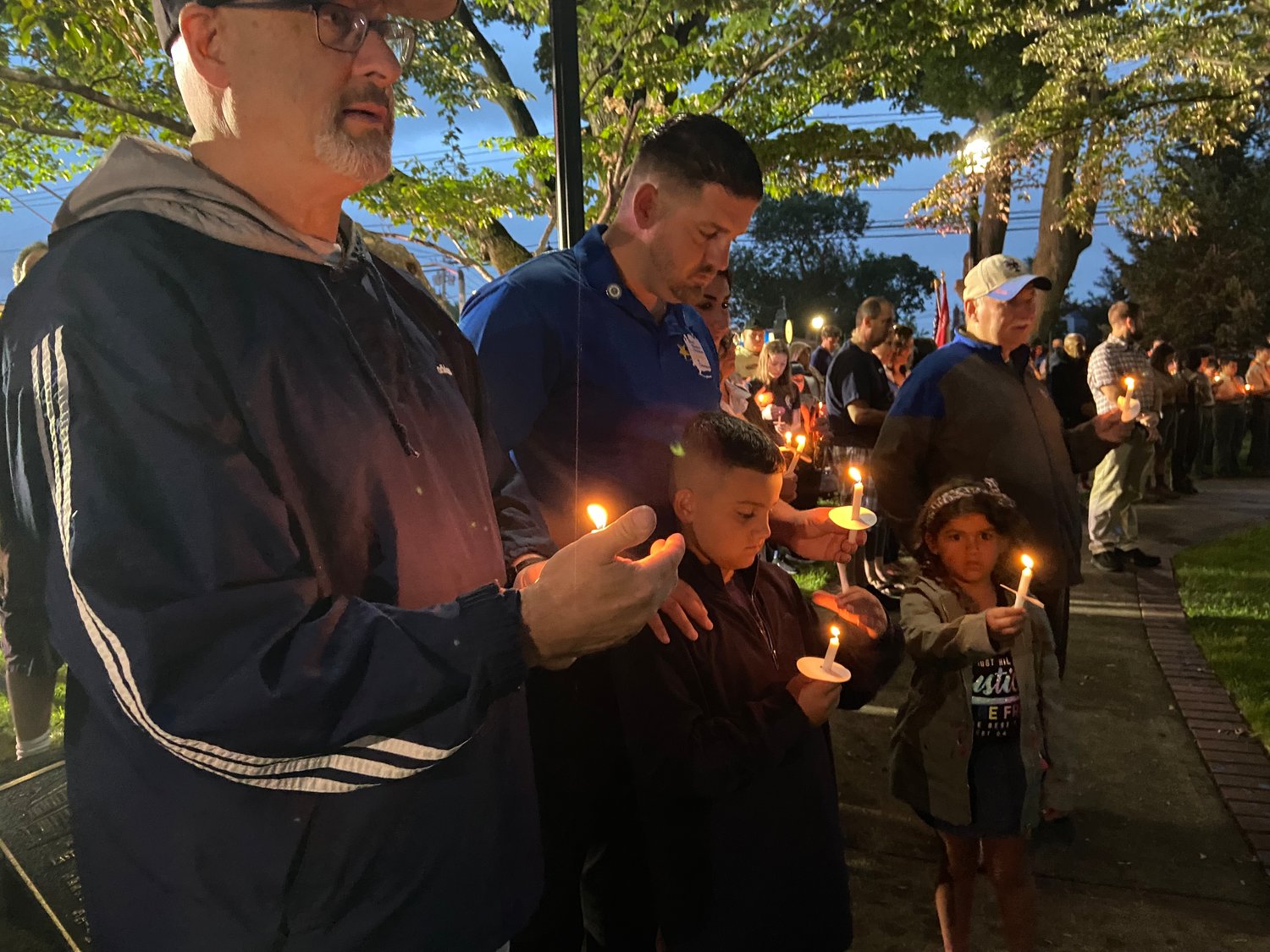 Even in the rain, candles maintained their light as the audience listened to the speakers. 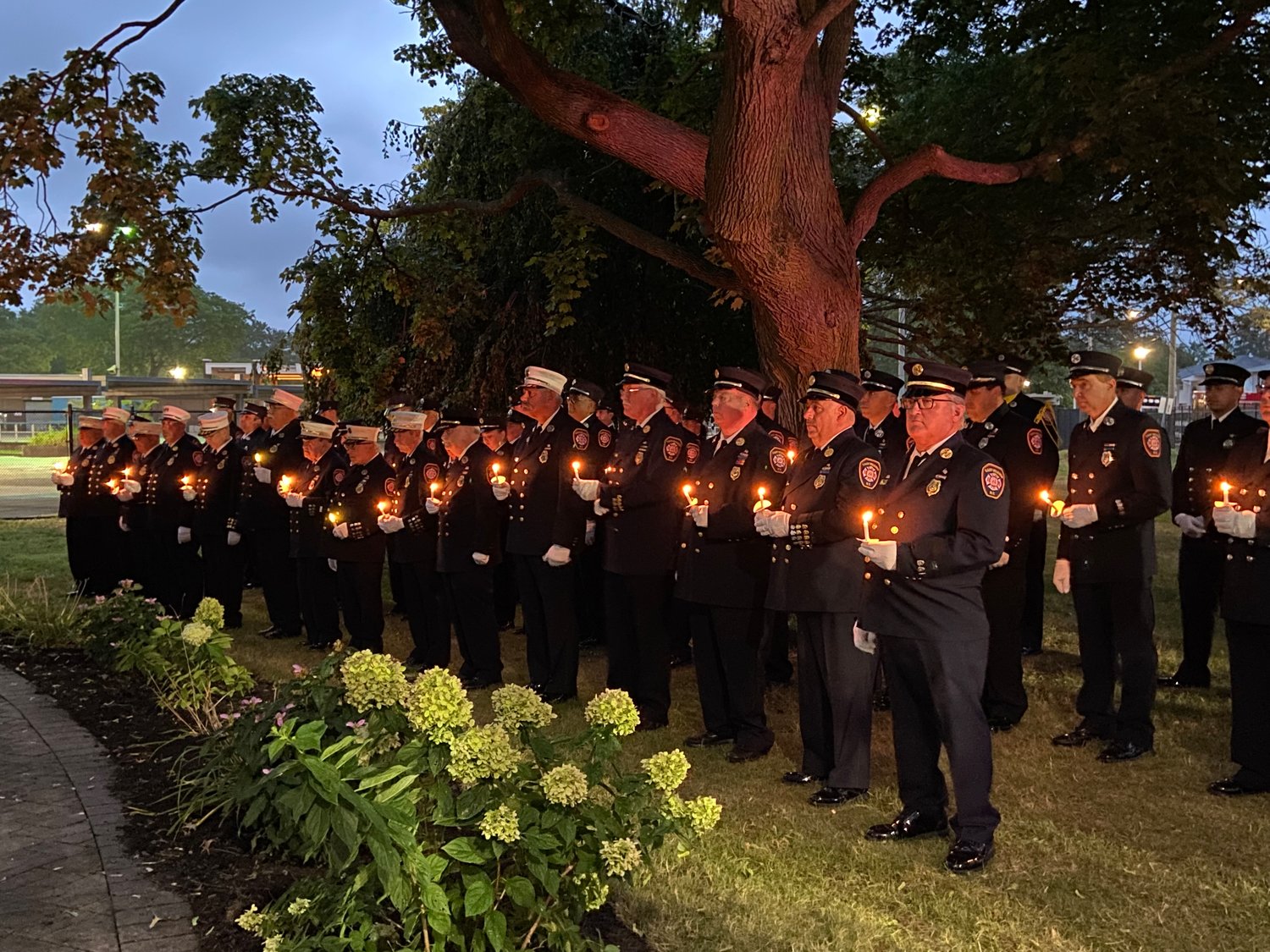 Members of the EMFD held their candles in honor of those who sacrificed their lives on 9/11 at the ceremony hosted by the fire department on Sept. 11. 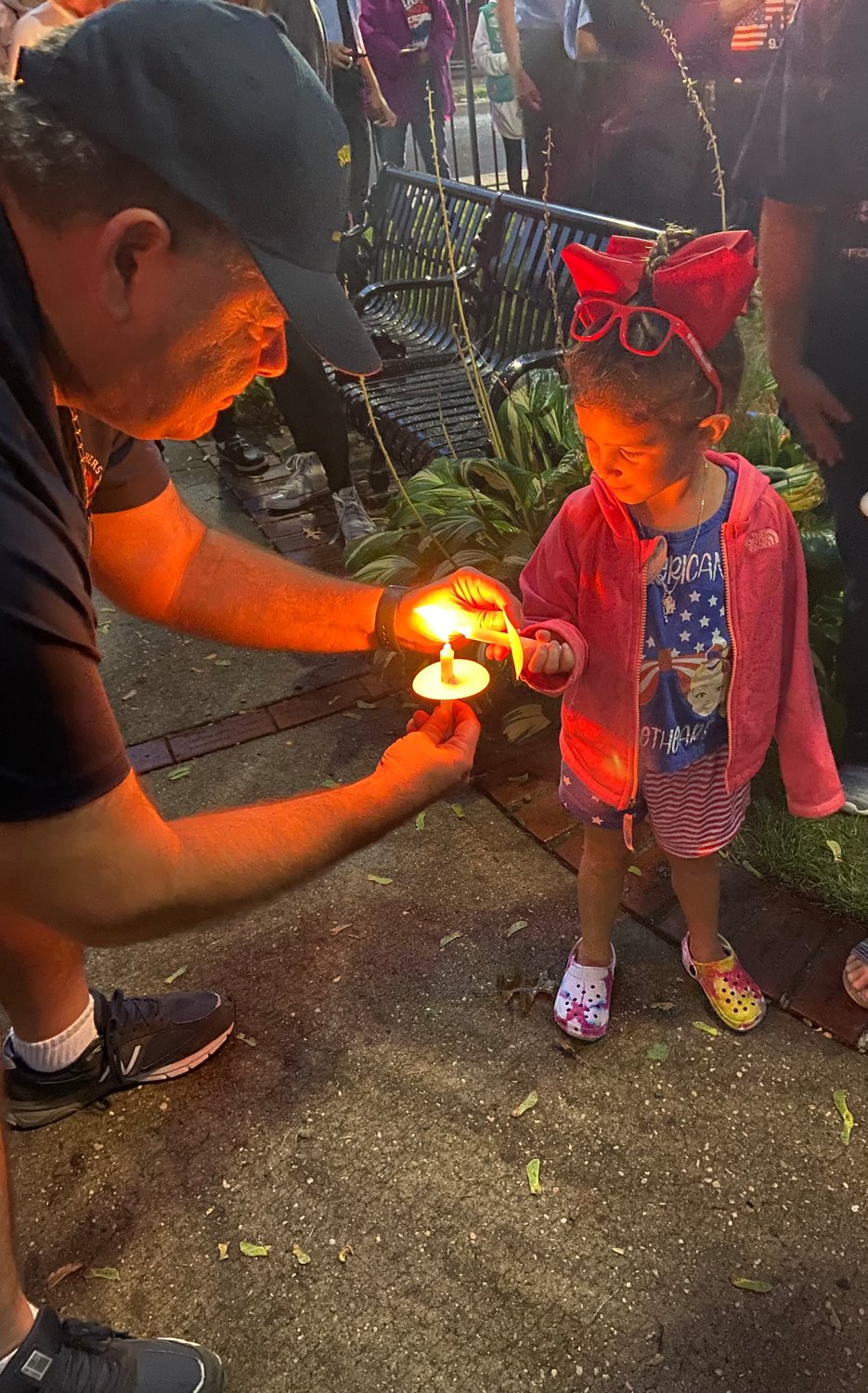 Avery Leake, 5, got a helping hand from Mark Papagni at the East Meadow Sept. 11 ceremony on Sunday at Veterans Memorial Park.
Previous Next

The gray skies and rain didn’t stop the community from coming out to Veterans Memorial Park to honor those who sacrificed their lives on Sept. 11, 2001. 21 years later, the community still mourns.

The ceremony, hosted by the East Meadow Fire Department, featured volunteer firefighter Glen Carpentier leading the ceremony. He recalled the events that occurred and how people must never forget.

Seven local residents died in the terrorist attacks — four who worked in the World Trade Center, two firefighters and a police officer. Other residents have since died of illnesses they contracted as a result of their work at ground zero in the aftermath of the attacks.

In 2014, the East Meadow Kiwanis erected a memorial in the southeast corner of the park, featuring a 1,800-pound marble slab with an etching of the twin towers, and a steel beam from ground zero.

On the marble is a footstone that reads, “In the name of freedom/To those who lost their lives/September 11, 2001,” and bears the seven names: Ann McGovern, Carlos Dominguez, Stephen Mark Fogel, Stephen LeMantia, Claude “Dan” Richards, Daniel Brethel and Thomas Patrick DeAngelis. Each year, members of the EMFD place a new wreath next to the memorial to honor them.

East Meadow Board of Education Trustee Scott Eckers sang two songs for the crowd, local Scout’s helped with the presentation of colors, along with the Fire Department Color Guard. EMFD chaplain Douglas Wood, of the United Methodist Church, led the gathering in a prayer. Rabbi Ronald Androphy, of the East Meadow Jewish Center, also offered a prayer.

The candles were bright as the sun set and the audience listened attentively.