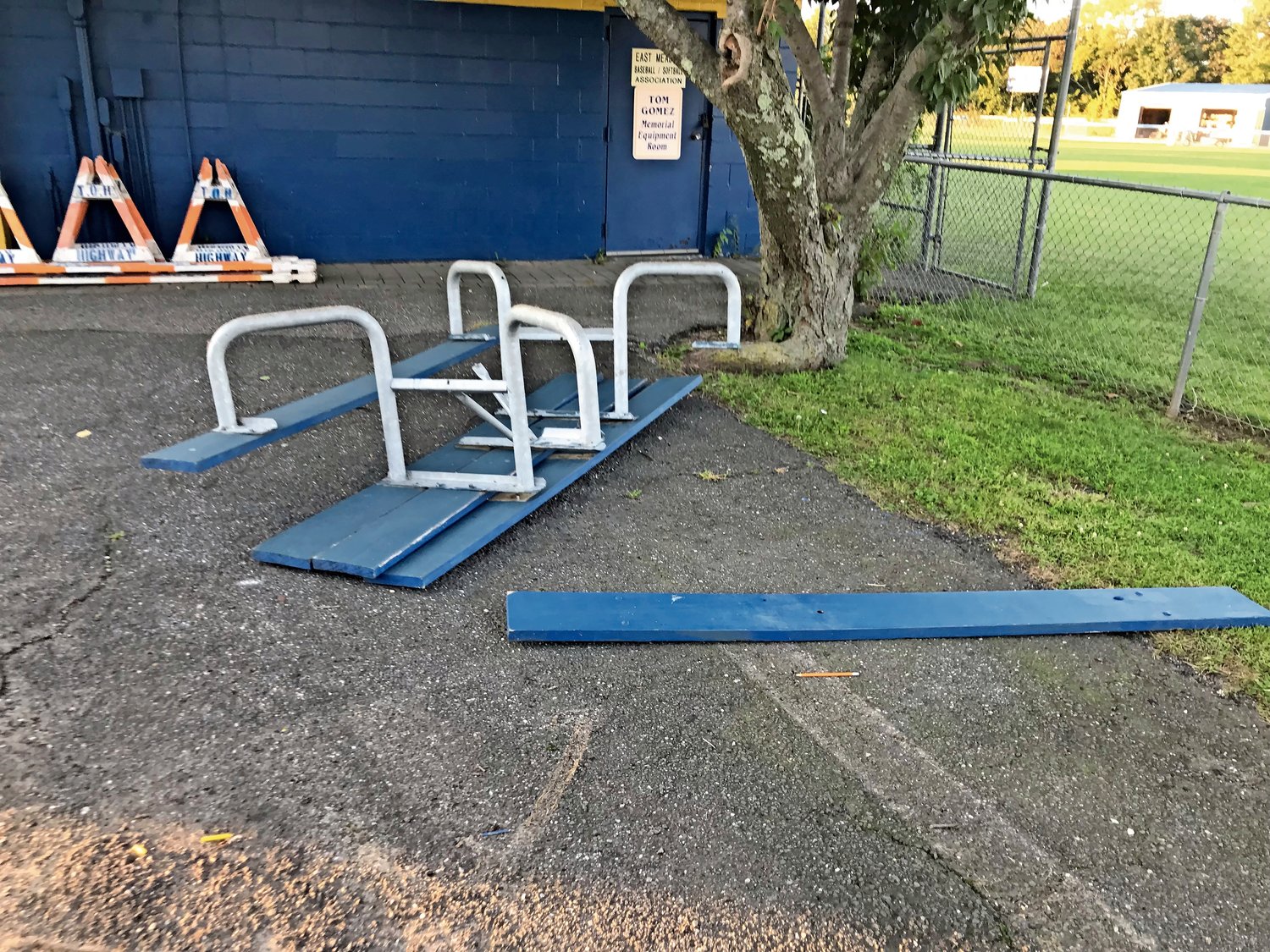 The East Meadow baseball and softball complex on Merrick Avenue was vandalized Sept. 25. Above, the picnic tables were damaged
Photos courtesy Stephen LaSala 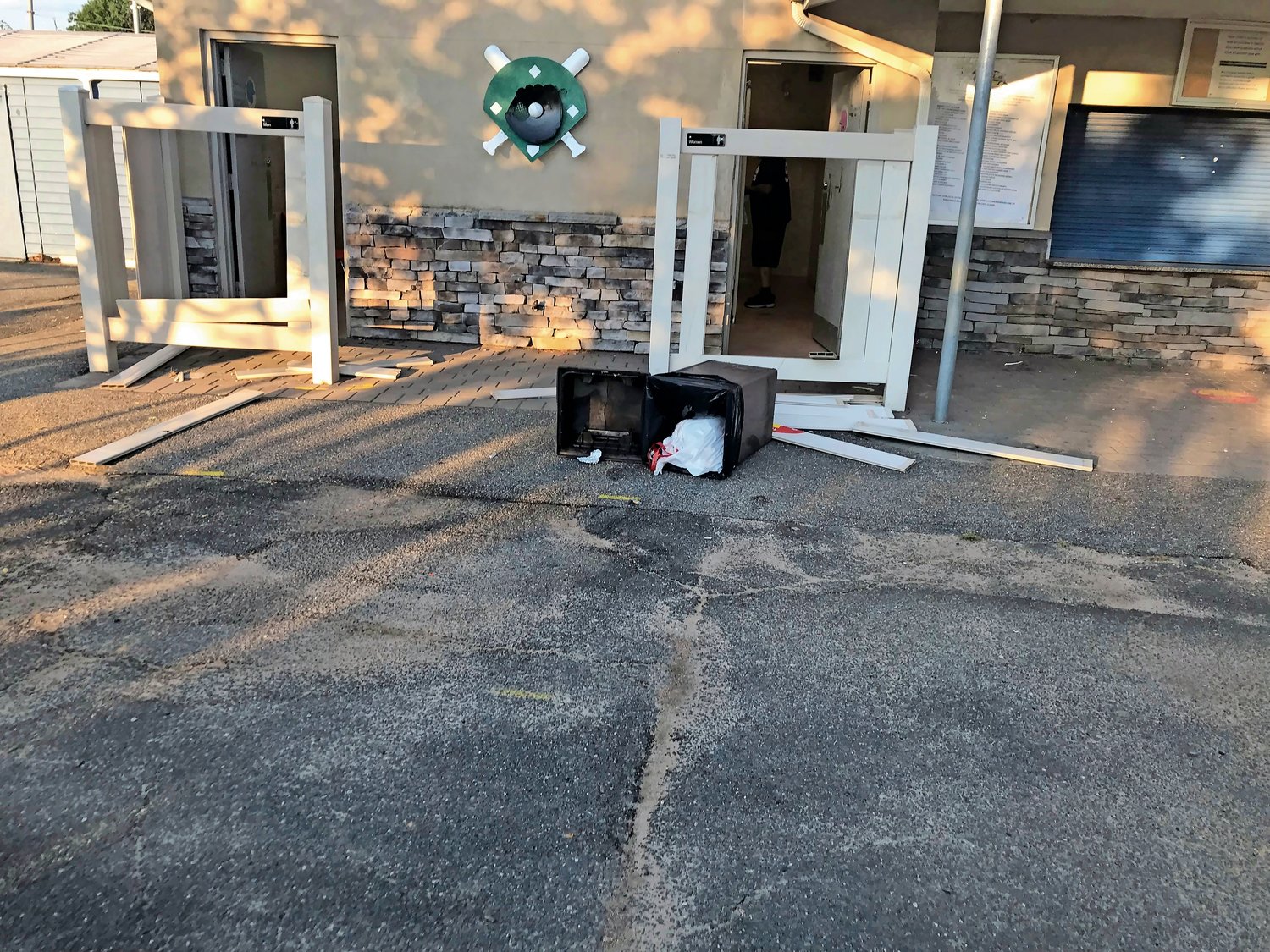 This was not the first time the site was vandalized in recent months, East Meadow Baseball and Softball Association officials said.
Stephen LaSala 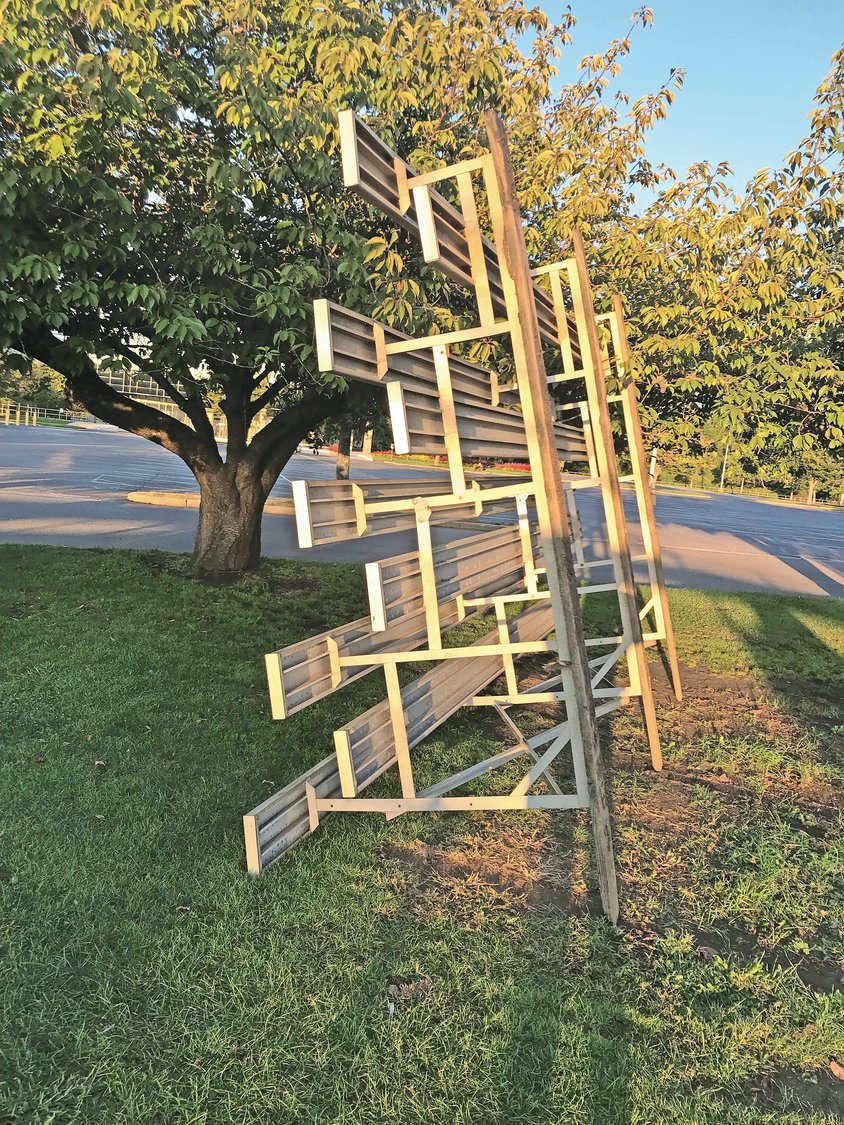 EMBSA board members cleaned up the complex before the scheduled games.
Stephen LaSala
Previous Next

It was disheartening. We can only assume it was done by East Meadow residents, and that’s a shame.”
Stephen LaSala Commissioner, East Meadow Baseball and Softball Association
By Mallory Wilson

Picnic tables were broken, trash cans were overturned, bleachers were flipped over and other damage was done to the complex, said coach Benjamin Necci, who arrived at the fields 45 minutes after Catalano.

“They completely messed up the field, and busted up the bathroom partitions,” Necci said. “We got them about 80 percent back together, but some of the pieces were completely demolished.”

Shingles were ripped off the complex roof, dugout walls were knocked down, and some signs and fence sections were broken.

Nassau County police were called, and a report was filed, but there were no immediate suspects because there was no video of the vandalism, because the complex does not have security cameras.

“We sustained a lot of damage, and I’m going to try to get it fixed,” said Stephen LaSala, the Baseball and Softball Association commissioner. “But because of Covid, we don’t have as much money as we have had in the past.”

The complex serves five Little Leagues, including a mini-league/kickball team, boys’ baseball, girls’ softball, a senior league and a challenger league for children with special needs.

Registration was down this year because many children did not join leagues during the coronavirus pandemic, which affected the association’s revenue, LaSala said.

“It was disheartening,” he said. “We can only assume it was done by East Meadow residents, and that’s a shame. Those kids who did this probably played here when they were younger, and that makes it worse.”

The 9 a.m. games were delayed until later in the day. LaSala said league officials did not want to cancel games because they knew the children had their hearts set on playing.

“We tried to put everything back together and got rid of all of the garbage that was thrown around just so the kids would be able to play,” he said. “We ended up getting everyone to play. They were our Challenger League games, and we never want to cancel those.”

EMBSA is a volunteer organization. LaSala said board members came down to clean everything up, which took about an hour and a half.

This wasn’t the first time the site was vandalized in recent months, Necci said, but the damage has escalated. He referred to the first time over the summer as “playful vandalism” — trash cans flipped over and broken beer and liquor bottles left behind. The second time the roof was damaged and picnic tables were broken.

“It hasn’t been a problem every summer,” he said. “It has happened in the past but always stopped. But this year three out of the last four weekends there has been something, and this was probably the worst one.”

“It’s very unfortunate,” Nassau County Legislator Tom McKevitt, of East Meadow, said. “The Little League fields are an institution in East Meadow, and I think it’s one of the best complexes in Nassau County, without a doubt. I hope the police will find a way to apprehend whoever is damaging the property.”

Lasala said county police and Town of Hempstead public safety officers drive by, but no one is assigned to the field. Police have recommended purchasing cameras for the complex.

“Cameras are something now that we’re going to have to look into more,” LaSala said. “One of the reasons they weren’t there was cost, but since this keeps happening, it’s time. It’s a shame that is how money has to be wasted now instead of buying new equipment for the field.”

Besides volunteers, registration and fundraising, money for the leagues comes from various East Meadow sponsors.

“We try to make a very good environment for the kids of East Meadow,” Lasala said. “We keep costs down as much as we can, and it’s a real shame this happened.”