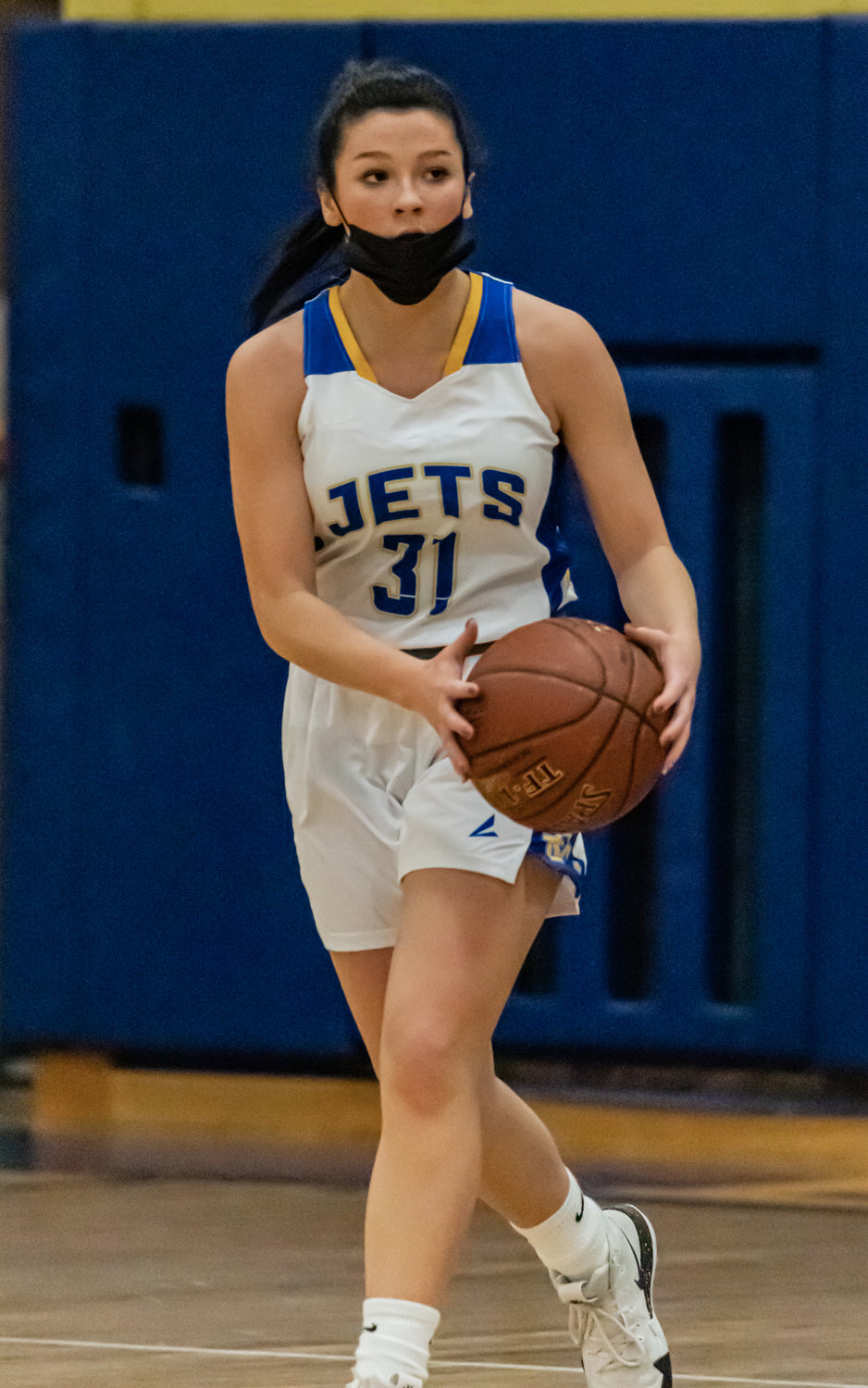 A collective sigh of relief has segued to more familiar shouts of excitement at East Meadow, as the Jets appear to have quashed early questions surrounding their quest for an eighth-straight trip to the Nassau County Class AA girls’ basketball playoffs.
When All-Conference eighth-grade phenom Alie Twible (now a freshman) transferred over the offseason, it meant that East Meadow, in an instant, had lost its playmaking scoring leader, 3-point basket leader, and only game-tested true point guard – an individual set of attributes singularly hard to come by.
But happily for Jets head coach Pete Olenik, no law stated it couldn’t be replaced by a combination.
Senior Lindsay Solenski – East Meadow’s No. 4 scorer in spring (4.7 points per game) – was shifted from shooting guard over to point, while first-year starter Charlotte Viola (sophomore) slid into Solenski’s old spot on the wing.
Et volia. Solenski, keys in hand, has trebled last season’s offensive pace (17.2 ppg) to rank second in conference scoring, Viola – not far behind (14 ppg) – has made 17 treys tying for second in league, and East Meadow (6-3 overall) sits atop Conference AA2 at 3-1 as owner of the league’s second-leading defense (40.4 ppg) and No. 3 offense (50.2 ppg).


“I think we’re looking like a playoff-bound team,” Olenik said. “Our ability to put the ball in the basket is a little surprising. Lindsay has really stepped up in our time of need. I can’t say enough about her. She has a good supporting cast, of course. Charlotte’s a dual threat; she’s a shooter, but can also get to the rim. She’s a coach’s dream, prepares and works hard. When you do those things, good results come. For her they’re coming at a rapid pace.”
Still better results could loom on the Jets’ horizon, as forward Isabella Pota (junior) is poised to return from an early-season injury (ankle). Entering the thick of conference play, Olenik said East Meadow will need the fourth-year co-captain’s contributions to stay competitive with rivals. “With Isabella out, that’s about 15 points a game we’ve been missing,” Olenik said. “We’re about to start facing teams like Baldwin, which can be humbling. But with [Pota] in the lineup, we’ll have four legitimate scoring options. We should be peaking at the right time.”
That fourth option Olenik alluded to would be sophomore Brooke Vislocky, who in her first season starting at wing is third on the club with 8.1 ppg, and second with eight 3-pointers. “Brooke’s a very important part of our team,” Olenik said. “She can shoot the three, play defense, does all the right things. She’s a calming influence on the floor, and an excellent accent to Viola and Solenski.”
Having kicked off the season with a three-win run (non-league), East Meadow stumbled 1-3 before winning two straight.
“We’re going to be coming into our own,” Olenik said. “We had a couple rough games. But with our full complement of players, we’re a good team. I’m excited about what this team might be capable of doing.”