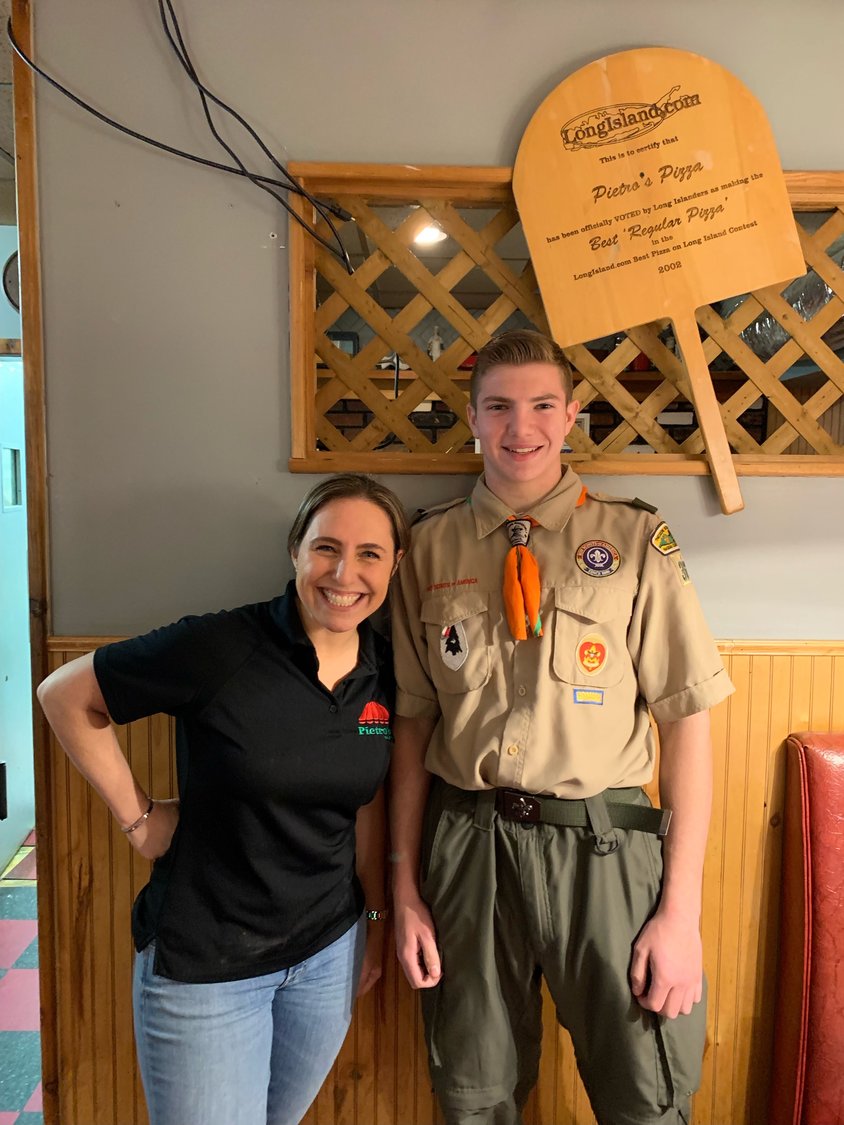 Alex Schwartz held a fundraiser at Pietro’s Pizzeria with owner Lauren Maslov on Jan. 10. The funds will go to purchase supplies for his Eagle project.
Courtesy Alex Schwartz

He’s everything you would want a kid to be.”
Steve LaSal,a Commissioner, East Meadow Baseball/Softball Association
By Mallory Wilson

A major community service project, which must be completed before a scout turns 18, is required to reach Eagle Scout, BSA’s highest rank, attained by only 8 percent of scouts in 2019, the latest year for which data was available. An Eagle board of review must approve the project once complete, along with the scout’s Eagle application. Eagle Scouts must also earn a minimum of 21 merit badges and serve as a troop leader, among other requirements.

Schwartz, a Troop 362 member, said he decided on the project because he has spent much of his life on the fields at the complex, giving him a good sense of what they need. He played baseball from around age 4 or 5 until he was 15, and he now umpires at the complex.

“The shelving is really going to help out a lot because in the mini field dugouts they don’t have any shelving,” Schwartz said. “With the shelves that I’m making, they’ll be able to put their equipment in there instead of leaving it on the bench or on the floor.”

Steve LaSala, the East Meadow Baseball and Softball Association commissioner, said he loves when young people who played at the complex give back to it. “I think it’s absolutely fantastic what he was doing for the complex,” LaSala said. “He’s a great kid and always helps out on the field,” adding, “He’s everything you would want a kid to be.”

Schwartz said he started planning the project over the summer of 2020, developing a required 10-page report on it. Once BSA’s executive board approved the project, he could start fundraising for it.

“I met with my Boy Scout leader over 10 times to perfect my writeup before sending it to the board,” Schwartz said. “My leaders want our proposals to be perfect so that when it is sent to the board, they approve it.”

The proposal must include safety precautions, needed materials and their prices, supervisors, the project timeline and the reason for it. Schwartz submitted the proposal to the executive board last August, and it was approved in September.

Schwartz raised $1,200 to complete the project, with his first fundraiser at Pietro’s Pizzeria in East Meadow on Jan. 10, which brought in $500.

Lauren Maslov, Pietro’s owner, was excited to hold the fundraiser. She said Schwartz greeted everyone who attended. “He brought in a lot of business. Almost 80 people came in just for the fundraiser,” Maslov said. “He blew it out of the water.”

Schwartz, an East Meadow High School senior, has a sister, Erin, 14. He said he joined Cub Scouts in first grade and Boy Scouts in sixth grade.

“I joined Cub Scouts because I love camping and I love the outdoors and I thought that it would be really fun,” Schwartz said. “I’ve always loved the outdoor aspect.”

Aside from Boy Scouts, Schwartz has wrestled in school since seventh grade, and he’s in the math and science honor society.

For his Life Scout project, he painted all the dugouts at the complex in 2018. Now, he said, he is proud to become an Eagle Scout.

“The honor really makes me feel like I accomplished something great,” he said. “I’ve spent my whole life since first grade completing this project.”