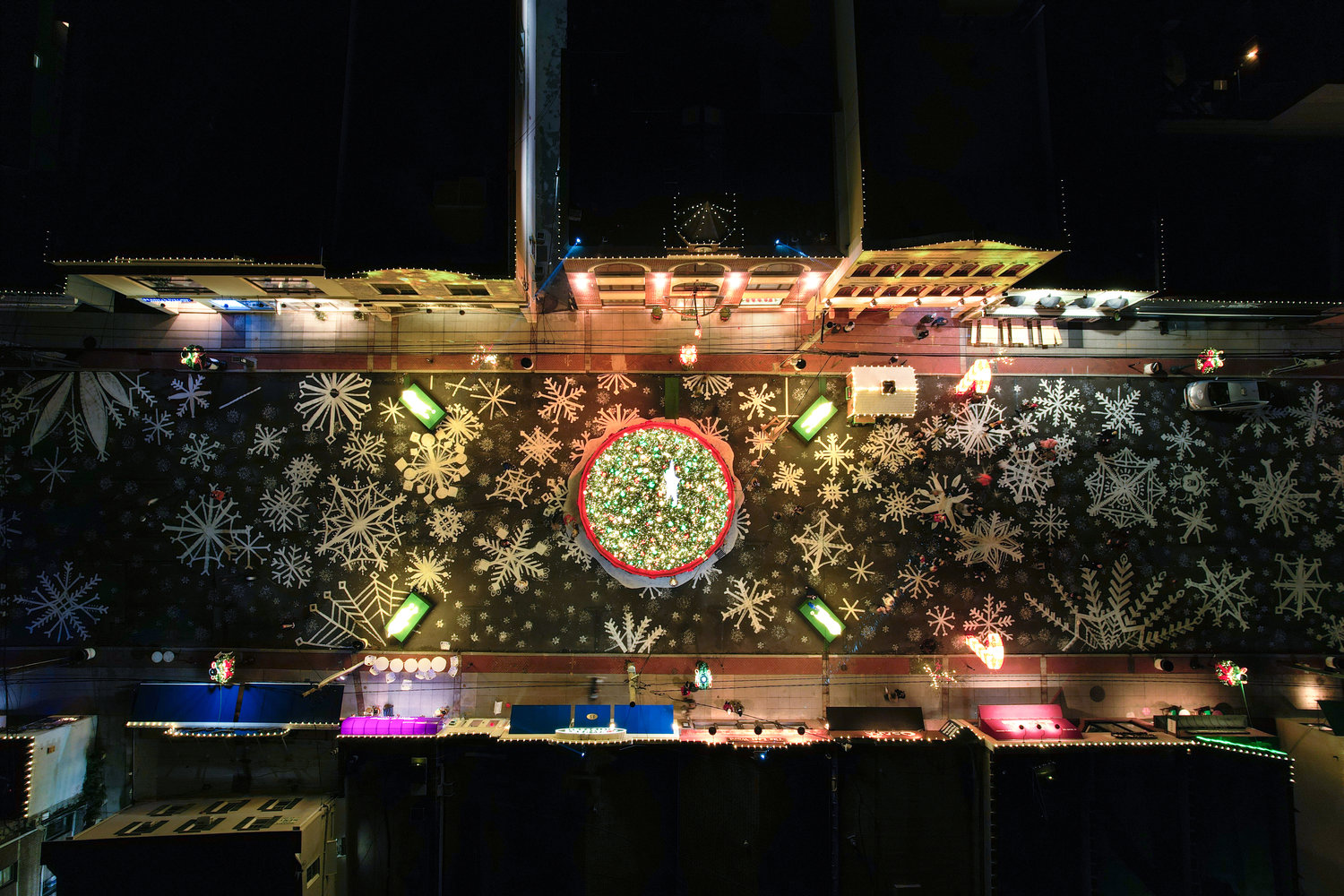 The entirety of Huntington’s Wall Street was covered in snowflakes painted by Cass Jones, an artist from East Meadow.
Photo by Rob Corcoran, Courtesy Cassandra Jones

What she did was crazy, and when I saw it I was amazed.”
Dave Jones, Father
By Mallory Wilson

East Meadow resident and artist Cassandra “Cass” Jones designed and painted the entire Huntington Holiday Spectacular herself this past December — all while suffering from an autoimmune disease amid the coronavirus pandemic, requiring her to receive special permission from her doctors to undertake the project.

Jones, 34, was asked by Stephen Ubertini, the co-owner of the Paramount concert hall in Huntington for the second straight year to complete the project, which includes painting the streets, storefronts and the inside of an 80-foot Christmas tree. She made stencils from coat hangers to create the whimsical snowflakes that lined the street, painted with white masonry paint and spray paint.

“I 100 percent didn’t know what I was doing,” Jones said, “but I knew from my years of experience that I could do it.”

The Huntington Holiday Spectacular began last year when the Town of Huntington wanted to create a holiday display that allowed onlookers to enjoy the scenery without fear of contracting Covid-19, transforming Wall Street into an interactive display with a “tree of hope,” light shows, snow cannons, music and street art.

“I couldn’t believe the dedication she put into this project,” Jack Palladino, the Huntington BID president, said. “She was out there every night for hours, and what she created was amazing.”

The spectacular took place Nov. 27 to Jan. 7, with the same holiday magic as last year, but with one difference: This year it was dedicated to health-care workers. Jones said the theme was dear to her heart.

“Last year, without the hosts knowing, I worked to create the holiday spectacular with a paralyzed stomach,” Jones said. “This November I was contacted once again to paint, and with doctor’s approval I stepped up.”

Jones explained to her doctors how important the project was for her, especially since it was to honor health-care workers. Aside from her own bouts of illness, she has had to help with her parents’ ailments as well. Her mother, Millie Jones, died in 2019 after years of battling breast and pancreatic cancer. Two weeks after completing the holiday spectacular last year, Jones had to advocate virtually for her father, Dave Jones, who spent time in the hospital after suffering from septic shock.

Jones, who studied design at the School of Visual Arts in Manhattan, has been an artist since she was a child. She used to help her dad, also an artist, with his projects before starting to secure her own jobs. Currently, she works as an artist doing body painting at events, tattoo work and other art gigs.

“She’s always been great at art,” Dave Jones, her father, said. “She can do all different types of art.”

Cassandra first met Ubertini in 2019 while working at Spotlight, an art bar and restaurant at the Paramount, doing live body painting for a show.

“When they learned I had other abilities other than painting and body painting, they chose to take advantage of my skills and called me last year and asked if I wanted to participate in the holiday spectacular,” Jones said. “It was very hush-hush because they had never done it before.”

The street was closed then to give restaurants an outdoor dining area to help them during the pandemic, but the town wanted to do more.

“They were trying to help the businesses and the community because at this point everyone was on lockdown, and there was still a curfew,” she said. “They called me and asked me what I could do to help the street look better.”

She chose snowflakes as a theme because they created a winter wonderland feel. The flakes were spread around the street to help keep people socially distanced.

“There’s no rhyme or reason to the snowflakes,” she said. “Having the snowflakes everywhere made anywhere on the street a photo-op, rather than having everyone crowd near the tree.”

“What she did was crazy, and when I saw it I was amazed,” her father said. “Twenty people should’ve done that project, but it was just her.”

The surrounding restaurants kept Jones fed, and she slept at a workstation set up for her.  “It was just easier to sleep there,” she said. “I would just knock out and then be back at it again the next morning.”

At first, her doctors worried about possible Covid-19 infection and feared that Jones would be unable to handle the work because of her autoimmune disease. “They told me all of the things I was at risk for if something went wrong,” she said. “I told them, ‘Let’s talk about,” and they knew that I knew myself well enough to take care of myself.”

If Jones is asked back, she said, she would return next year.

“We really want to continue this next year,” Palladino. “We’ll definitely have her back.”