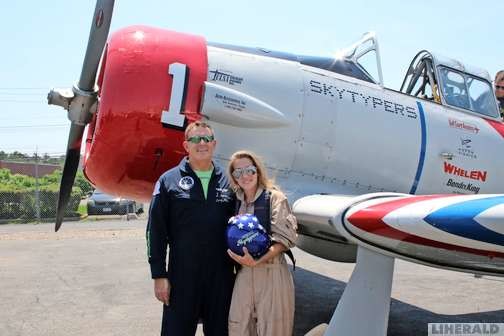 Pilot Larry Arken and Christina Daly after their flight.

"It was an amazing experience and I hope i can do this again next year. The Geico team was great and I'll be looking for them at the air show this weekend!”
Christina Daly
Photos by Christina Daly

Commanding Officer/Flight Lead Larry Arken took Photo Editor Christina Daly up into his SNJ-2 Geico Skytypers plane for a preview flight before the annual Bethpage Memorial Day Air Show at Jones Beach. Two other planes, flying wing to tip on either side of Arken's plane also carried other media personnel. Dutch rolls, pitch outs and other precision flight maneuvers were performed during this flight.

The GEICO Skytyping team is the only civilian squadron currently appearing at airshows and flying WWII aircraft. The team uses the WWII era SNJ-2 planes created for the US Navy by North American Aviation. The plane was also known as the NA-16, the AT-6, and the Harvard. This aircraft was the “middle step” in the training of many pilots between their Primary Training and their transition to actual combat aircraft.

The team consits of 11 pilots, Larry Arken, Ken Johansen, Chris Orr, Bob Johansen, Steve Salmirs, Tom Daly, Jim Record, Steve Kapur, Mike Eberhardt, Dino Peros and Kevin Sinibaldi. The highlight of the airshow weekend for the team is the time spent interacting with fans and spectators. The team regularly appears at the GEICO tent where they interact one-on-one with airshow attendees, sign autographs, and pose for photos. The GEICO Gecko is often around to join in the festivities.