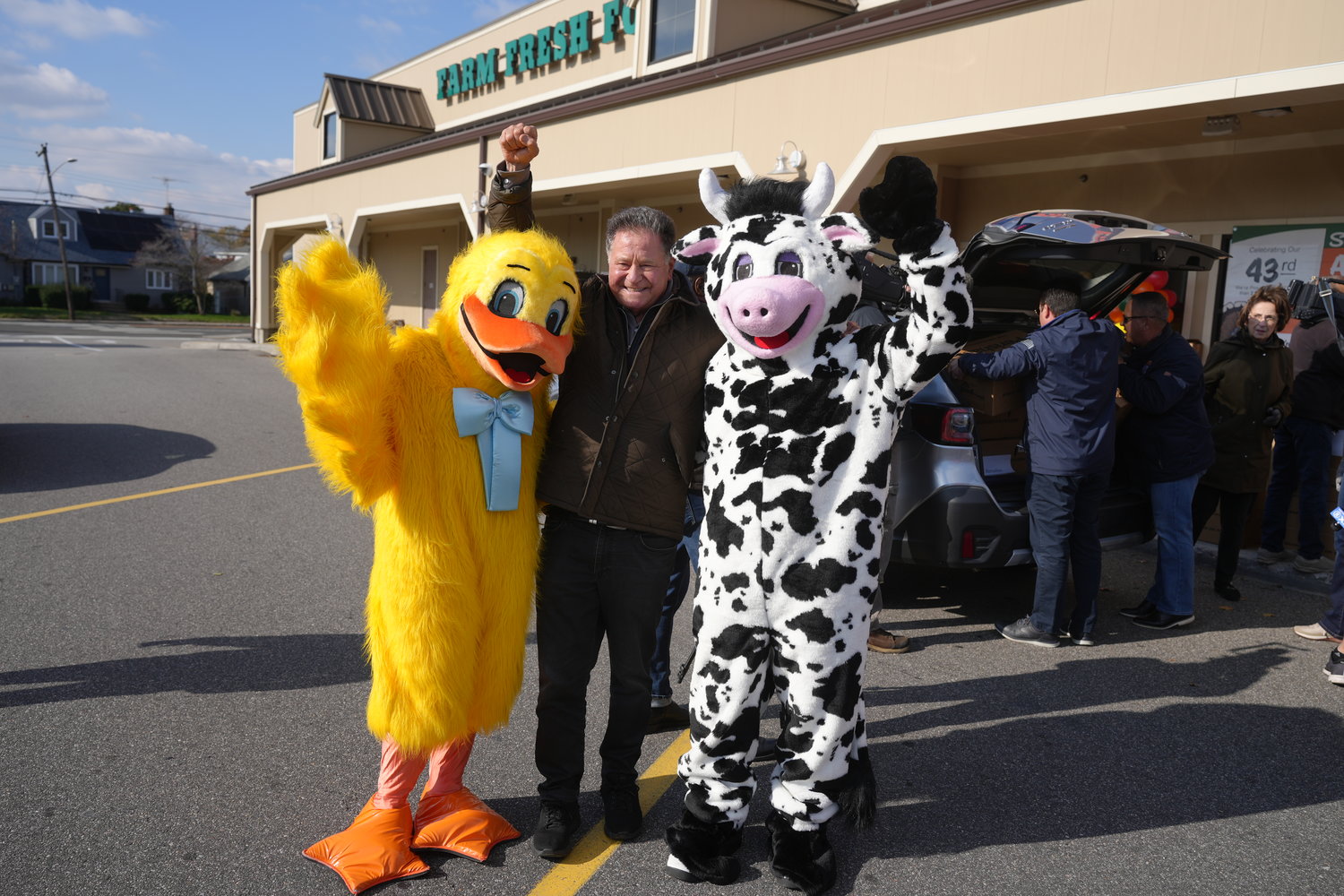 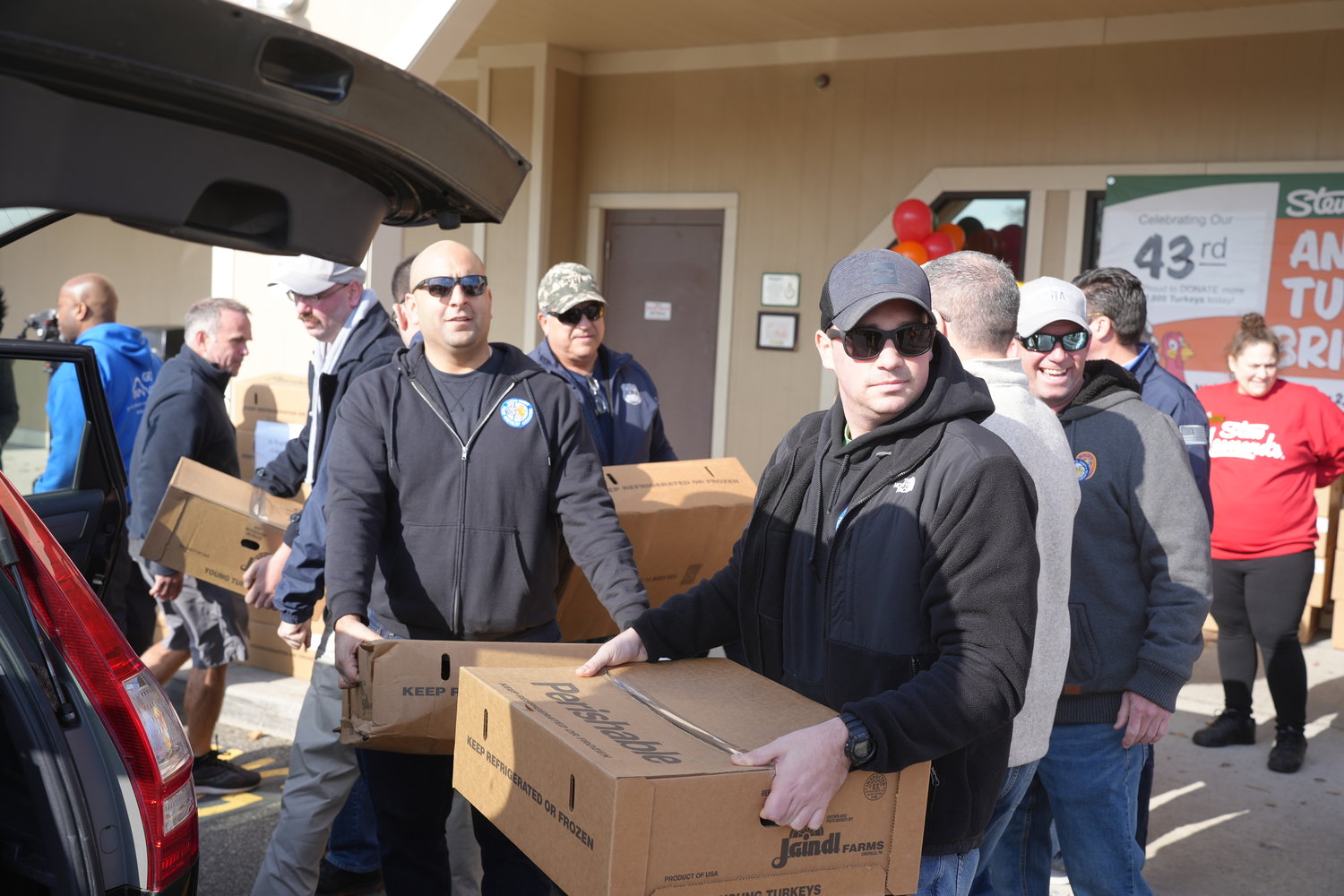 Lou Dileonardo, near right, and Michael Diclemente, far right, of the Nassau County PBA, helped pack boxes of turkeys into the vehicles of the beneficiaries.
Tim Baker/Herald 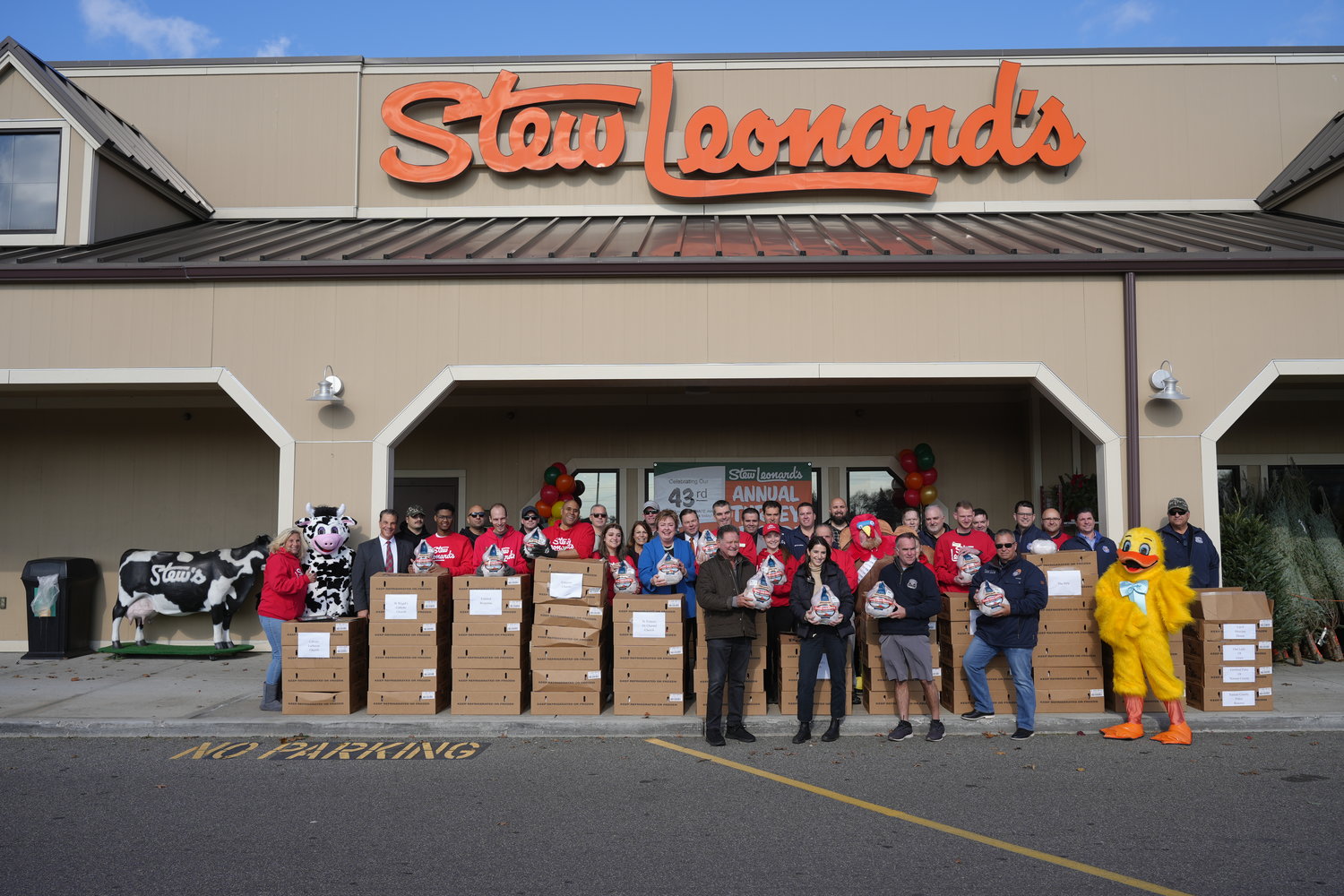 For 43 years, Stew Leonard’s has held an annual turkey drive to help feed those in need during the Thanksgiving season. The tradition has been passed down for decades, and each time a new store opens, it joins in on the holiday goodness.

Nearly 500 turkeys were given away on Nov. 17 outside the East Meadow Stew Leonard’s. The beneficiaries include local churches, food pantries and other organizations that collect food for the needy.

“It makes our Thanksgiving that much better,” said Stew Leonard Jr., the president and CEO of Stew Leonard’s. “Because we know that there are a lot of families out there who don’t have a great meal.”

The start of providing turkeys to charities in the communities surrounding its supermarkets started for Stew Leonard’s stores in 1979. At the East Meadow supermarket, which opened in 2017, the tradition is in its sixth year.

Stew Leonard’s plans to give away 3,000 turkeys at its seven stores.

“It’s important to bring the community together when you’re doing events like this so that everybody knows that everybody’s on board about supporting people in their time of need,” Jim Kane, the East Meadow Fire Department fire inspector, said. “There are a lot of people in our community that are not as fortunate as all of us.

Calvary Lutheran Church, on Taylor Avenue, has taken part in the turkey donation since Stew Leonard’s opened its store in East Meadow. The turkeys they received will be given to the Lutheran Social Services center in Uniondale, now known as the LIFE Center, since their church food pantry had to be shut down.

“It’s a beautiful thing,” said Christine Schulz, the treasurer and long-time member of Calvary Lutheran Church. “Unfortunately, we need to do it, in utopian society there will come a time when we don’t have to and everybody will have enough to eat, but for right now it’s important we do this.”

Schulz stressed that the need for food donations doesn’t end after Thanksgiving,

Long Island Cares reports that more than 272,000 Long Islanders are hungry or experience food insecurity, equating to one in every nine people. Of that number, more than 89,000 of them are children. According to the USDA, the average cost of a turkey has increased to nearly $2 per pound in 2022, up from $1.15 in 2021 due to inflation. So for many, this turkey drive is crucial.

“That’s the reason why, during the holidays, and every day, even after the holidays, we always receive tons of donations from monetary to canned goods to toiletries.”

Charities can apply to be beneficiaries of the turkey giveaway, but others were selected after a representative of Stew Leonard’s called them and asked if they needed help with stocking their food pantries.

“I think as a third generation, we’re obviously younger growing in the business, and it sets such a wonderful example,” Chase Leonard said of her dad’s turkey giveaway tradition. “We’ll continue on this tradition.”