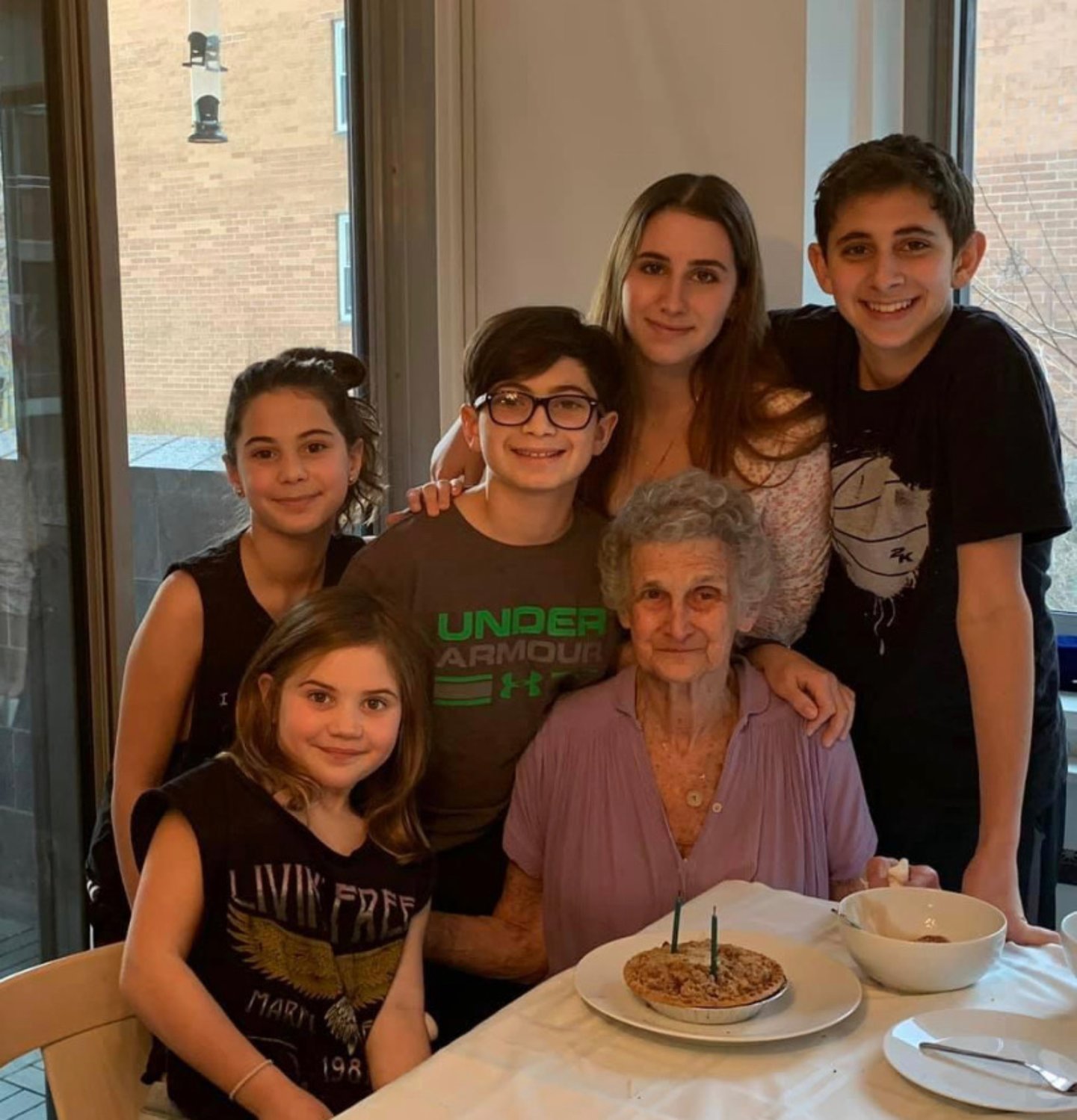 Ellen First, with her grandchildren, clockwise from lower left, Stella, Charley, and Hunter Heumann and Gabrielle and Zachary Miles, celebrated her birthday a few years ago.
Courtesy Allie Heumann
Previous Next
By Mallory Wilson

For nearly half a century, Ellen First touched the lives and minds of students at East Meadow High School. The popular English teacher died June 20, after an almost three-year battle with leukemia. She was 80.

Born in Florida in 1942, she grew up in Long Beach after moving there at age 3. She moved to Manhattan in 1973 and lived in Tudor City, a residential area on Manhattan’s East Side.

She spent most of her time teaching or in the theater, even bringing students into the city to see shows with her. “Ellen really took advantage of the city,” Rita Carter, one of First’s closest friends said. “She would always take students to see shows because she thought it was very important for them to be exposed to theater.”

First’s niece Allie Heumann described her as a “true force who was way before her time” with a “zest for life and mankind.”

“She just left an impact with every single person that she met, be it a homeless person that she would check on regularly, to the people that worked in the building, to her neighbors, to her students, to her colleagues,” Heumann said of her aunt.

When Heumann’s mother, Harriet Bernstein, died in 2006, First stepped up as a mother figure to her and her sister Rachel Miles. “She was the most thoughtful person and never thought once about herself,” Heumann said.

First retired from teaching June 1999 and went on to tutor and volunteer as an usher at theaters on and off-Broadway.

“She was such an avid theater-goer and would get tickets for everyone,” Irene Majcher, a retired teacher from EMHS and friend of First’s said. “She would take me along with her and her friends to so many shows and she really pulled me into her social crowd so that’s how I got to know her as a real friend.”

When Majcher posted of First’s death on the ‘People who grew up in East Meadow’ Facebook page, she saw an overwhelming amount of comments and likes on the post. Comments from former students who talked about how much they loved First and how they stayed in touch with her for years after they graduated. “She had a crazy postcard collection,” Heumann said. “So whatever the event was, if it was your dog’s birthday, if she just met you once, you would get a postcard from her.”

“(First) is among the caliber of teacher who doesn’t just change your education she changes your life,” Greg Moller, one of First’s past students said. “I still remember the lessons from her classes being stand-up life lessons.”

Moller compared First to the teacher in the movie, “Dead Poet’s Society.” He gained his love for theater from First and is still involved in the theater today. He said that one of his favorite memories with First was when his honors English class attended the play, “Les Miserables,” on Broadway with the original cast.

Majcher, who taught special education and the visually impaired in the East Meadow School District, said that many of her students were fortunate to have First as their high school teacher. “She not only was very committed to making sure that their needs were met in her classroom, but she very much wanted her other students to understand the challenges that my visually impaired students faced on a daily basis in the classroom,” Majcher said. She added that after obtaining a pair of glasses from the American Institute for the Blind that simulated various types of visual impairments, First allowed her students to wear the glasses and try to function in the classroom.

“It was really a very enlightening experience and that’s how she was,” Majcher said. “She really cared that much and wanted to force her understanding among the other students.”

Majcher is trying to create a scholarship in First’s honor to be given to high school seniors who intend to study English or Education in college. “I wanted to do this in Ellen’s name to memorialize her because she deserves that,” Majcher said. “I think Ellen would want to help a student who financially could not do it on his or her own, but really wants to in some way enter the education field.”

To get the ball rolling, Majcher sent a letter to Superintendent Kenneth Card and was sent the “sweetest response,” back. According to Majcher, Card said that he would send her letter to the district’s business office and the scholarship idea would need approval at the July 5 school board meeting.

“I think it’s amazing and I want to be able to help and do as much as I can with it,” Heumann said. “I think it’s a beautiful tribute.

“Everybody that knew her fell in love with her.”