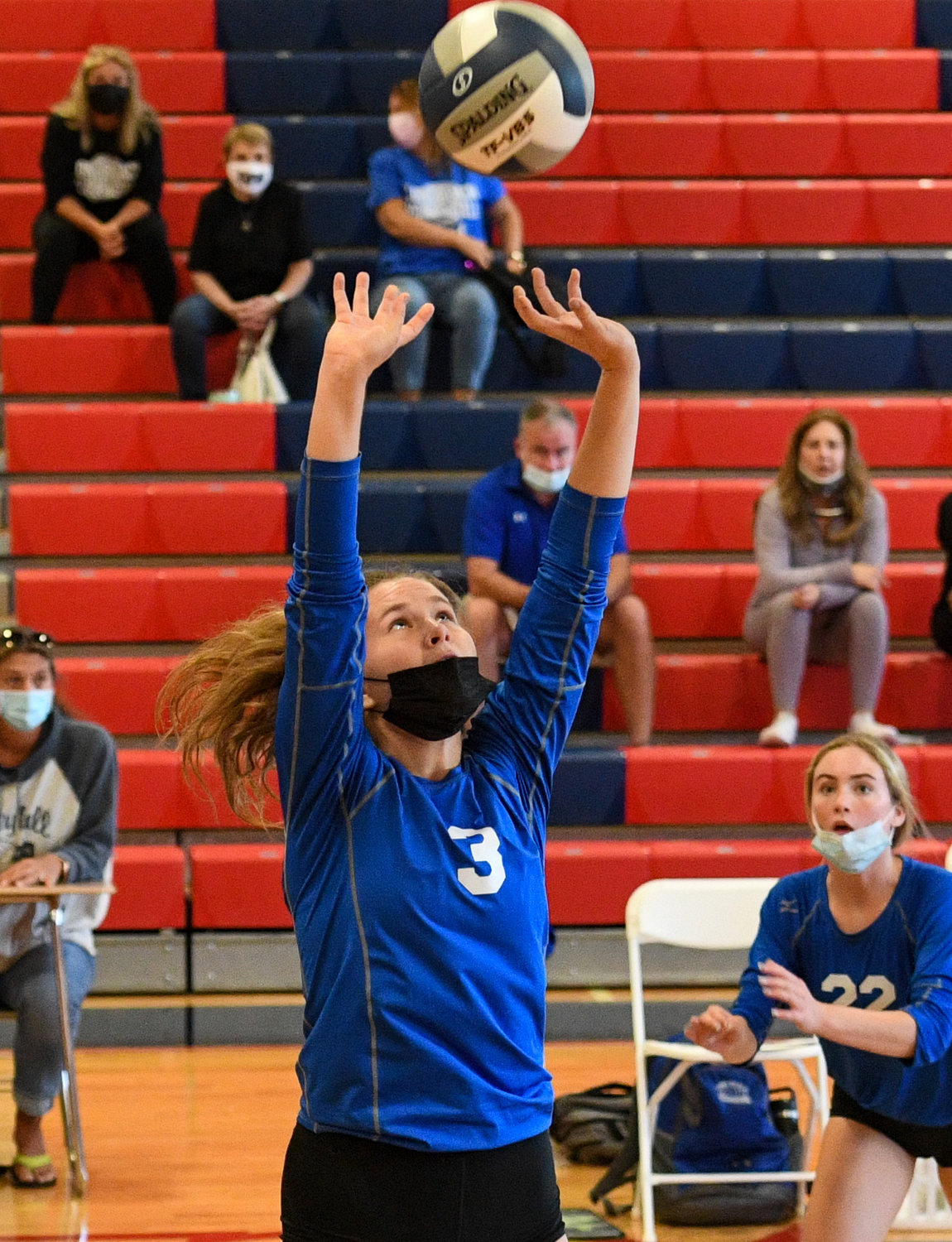 Senior Ali Kile is one of Long Beach's three captains and someone coach Kerri Rehnback is counting on to lead the way into the playoffs.
Keith O'Reilly/Herald
By Tony Bellissimo

With only two returning starters from a roller-coaster .500 spring, Long Beach girls’ volleyball is holding its own against some of the best competition Nassau County has to offer but needs to find a way to deliver under pressure to make noise in the Class A playoffs.

“We’re very competitive but still learning how to win,” Marines coach Kerri Rehnback said after last Saturday’s hard-fought 25-18, 26-24, 25-23 defeat at South Side. “A close match against a tough opponent with a good crowd is the type of atmosphere we want to be in,” she added. “I attribute the close losses to our youth and inexperience.”

Long Beach was 2-4 through six conference matches and also had strong showings in tournaments at Bayport, Smithtown and its host event. “We flipped over the whole roster except for our setter and libero,” Rehnback explained. “Next season it will be the complete opposite.”

Seniors Anna Moller and Ali Kile set the tone defensively and offensively, respectively. Both are three-year starters. Moller was a member of the Marines’ state championship team in 2018 and has taken her game to another level this fall, the coach noted.

“Anna has really come on strong and is one of the best liberos in the county,” Rehnback said of Moller, who leads the team in digs with 170 and service aces with 58. “She’s vocal and a role model and anchors our defense. She’s always been a good server, but she’s vastly improved it.”

Kile is averaging 6.7 assists per set and “conducts the orchestra,” Rehnback said. Kile was Honorable Mention All-County last season. “Ali is incredible in terms of her demeanor,” Rehnback said. “She’s so patient and calm out there. It’s great to have a setter with those attributes when you have young hitters.”

One of the underclassmen, sophomore outside hitter Amy Littman, is dealing with an ankle injury but should return soon. “She’s a selective hitter with smart placement and excellent on serve-receive,” Rehnback said. Junior Ava Rand was limited by injury last season but finding her groove again, the coach noted. “Ava is emerging quickly,” Rehnback said. “She’s one of our tallest kids and swings hard.” Rand’s 51 kills rank second to junior Shannon Powers, a lefty playing right-side hitter who has 68. “Shannon has a sneaky good swing and has been so consistent,” Rehnback said.

In the middle, junior Colleen Peers and sophomore Franki Kelleher are both up from JV and getting the bulk of court time. “They’re fast learners and doing well to keep us in points,” Rehnback noted.

Back-row help has come in the form of senior Sarah Gusler, who thrives from the service line, sophomore Zoe Moller, the libero of the future, and sophomore Hailey Cardiello.

Four of Long Beach’s last six regular-season matches are on the road. “We have a lot of potential,” Rehnback said. “Our mental toughness needs to be better.”