Military families share a hot meal and a visit with Santa 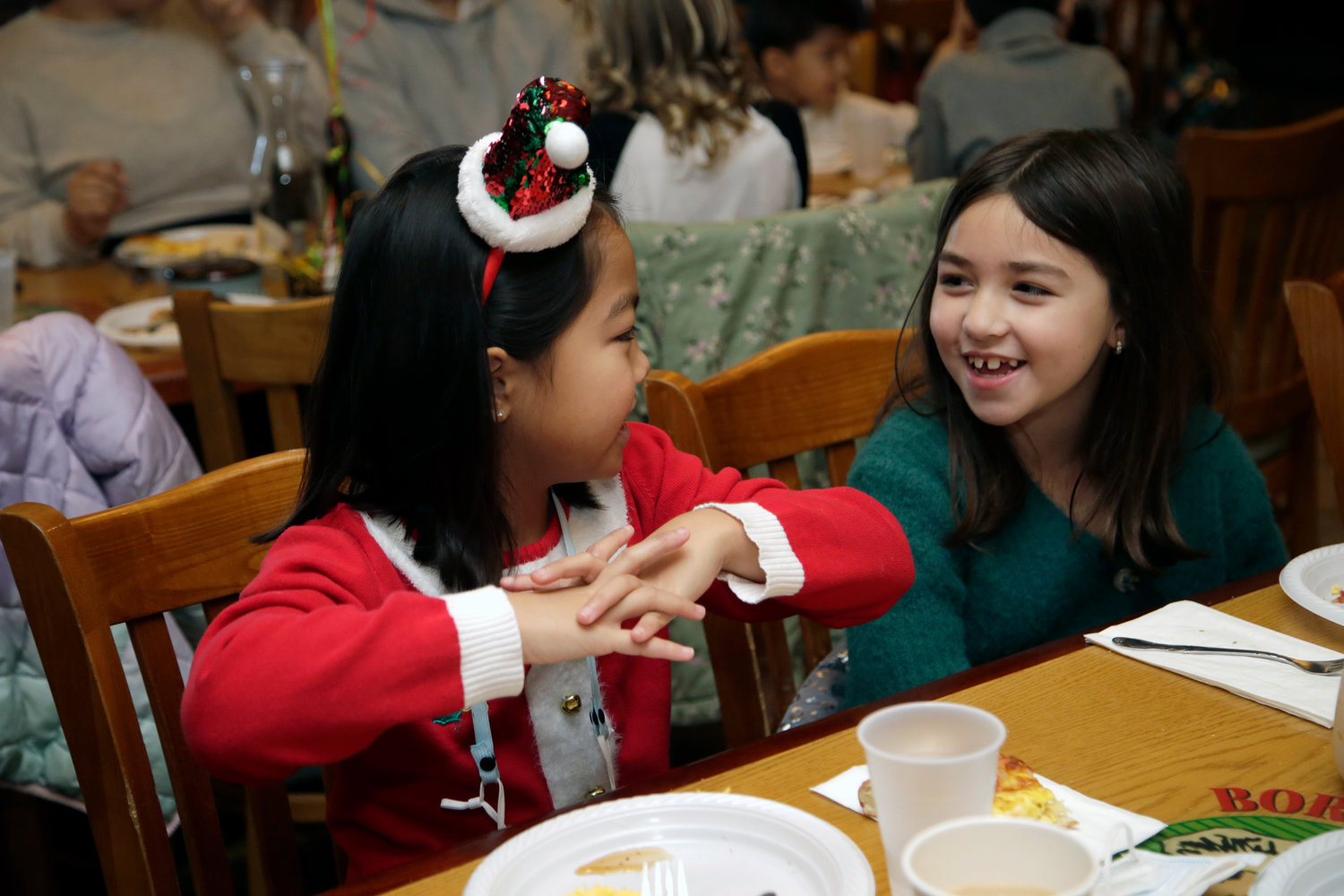 Cousins Arianna, left, and Mila LaRosa, both 8, waited eagerly for Santa to call their names at Borelli’s restaurant, during a breakfast hosted by the Independent Order of Odd Fellows.
Sue Grieco/Herald 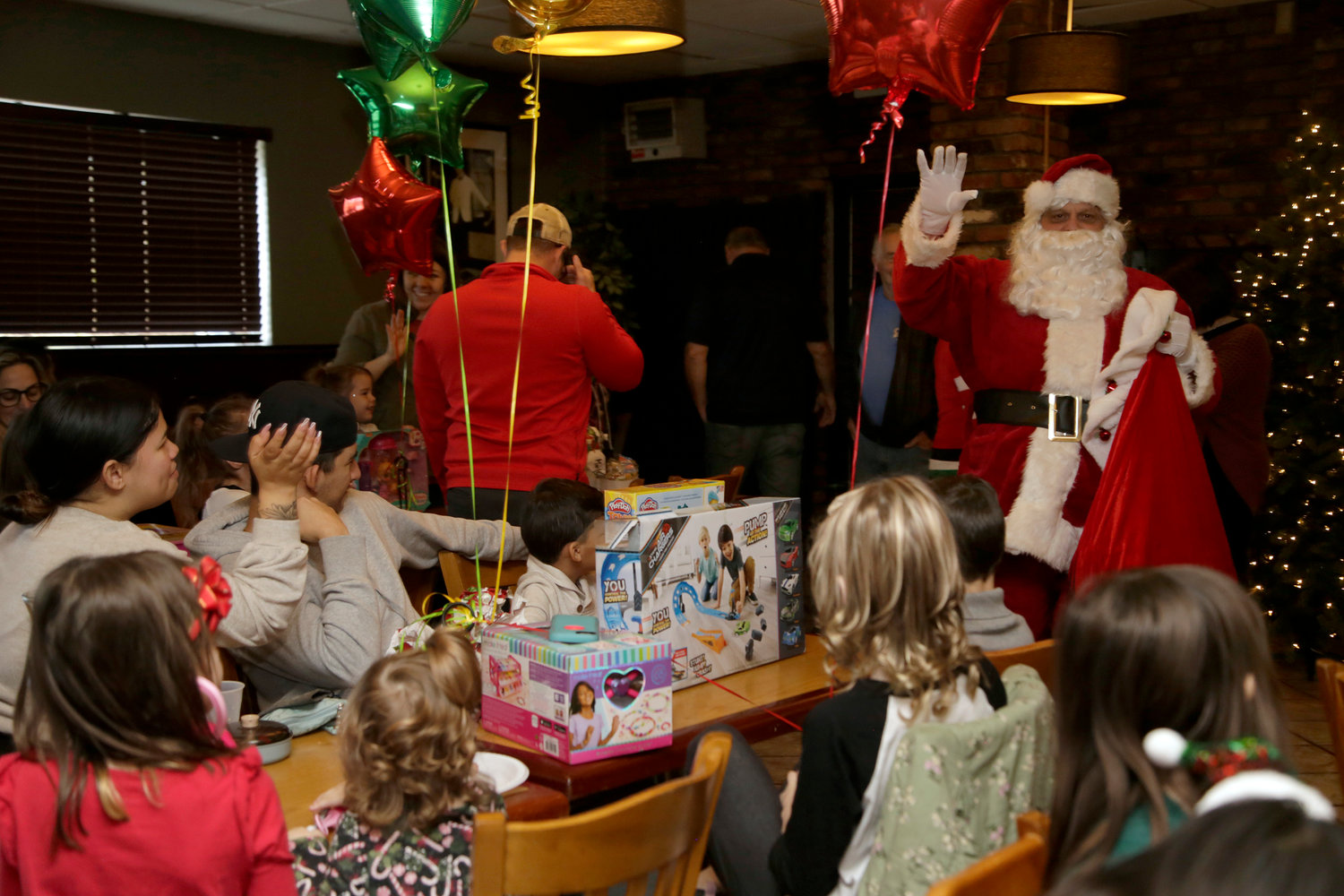 Santa waved goodbye to the children before heading back to the North Pole.
Sue Grieco/Herald
Previous Next
By Mallory Wilson

Vinny Cafiso, of East Meadow, said helping military members and veterans is dear to his heart. On Sunday, Cafiso helped host a breakfast with Santa for local military families at Borrelli’s restaurant in East Meadow, attended by about 30 children.

Cafiso and the Independent Order of Odd Fellows, a fraternal organization founded in 1819 that is focused on helping those in need, put the breakfast together. The organization’s creed is “visit the sick, relieve the distressed, bury the dead and educate the orphan.” The name derives from the types of men who formed the organization.

This is the first year that the group held a breakfast for military families or those who live in the Mitchel Manor military housing development in East Meadow.

“When I found out that they wanted to do this, I thought it was such a great idea,” said Allison Vardakis, of East Meadow. “Normally, depending on where you’re stationed, you will have a USO near you, and they would do something like this, but Long Island doesn’t have one too close.”

Vardakis brought her daughters, Holly, 8, Sophia, 6, and Olivia, 2 1/2, to the breakfast. Her husband, Andrew, has been in the Coast Guard for 10 years.

IOOF also held a Santa visit at Nassau University Medical Center, bringing gift cards. And Santa visited Mitchel Manor, delivering food and gifts to children when the government shut down during the coronavirus pandemic.  Because of the pandemic, Cafiso said, life has not the same for military families, and the organization is there to help.

“Frank Borrelli is a very good friend of mine, and I asked him if we could do a Santa breakfast for the kids at Mitchel Manor, and he said, ‘Great idea,’” Cafiso said. “I went to my lodge, and of course they agreed with it.”

Children at the breakfast enjoyed bagels from local bagel shops, munchkins from Dunkin’ Donuts and other treats from Borrelli’s.

“I was saved by the Barstool Fund, and now it’s time to give back,” Borrelli said. “There are always military kids, and it was great to do something for them.”

After breakfast, Santa arrived to give each child an age appropriate gift.

Vardakis, who met Cafiso when he brought supplies for military families to Mitchel Manor in 2019, helped get the word out about the breakfast. “A lot of these families, their husbands might be deployed or on duty,” she said, “so it’s nice to have something for the kids for the holiday season to offset that.”

Marisa Abroe, who lives in Mitchel Manor, said she liked that the event acknowledged the Coast Guard. Her husband, Bryan, is stationed in Kings Point. “I thought it was nice to be around kids and see Santa,” she said. “I haven’t heard of many other events like this, so it was nice to be together.”

Cafiso said he hopes to make the event an annual one. “I was talking to Frank [Borrelli], and I told him I want to make this an annual event, and he agreed,” Cafiso said. “. . . I’ll really plan in advance and maybe even invite others, like those who are less fortunate.”