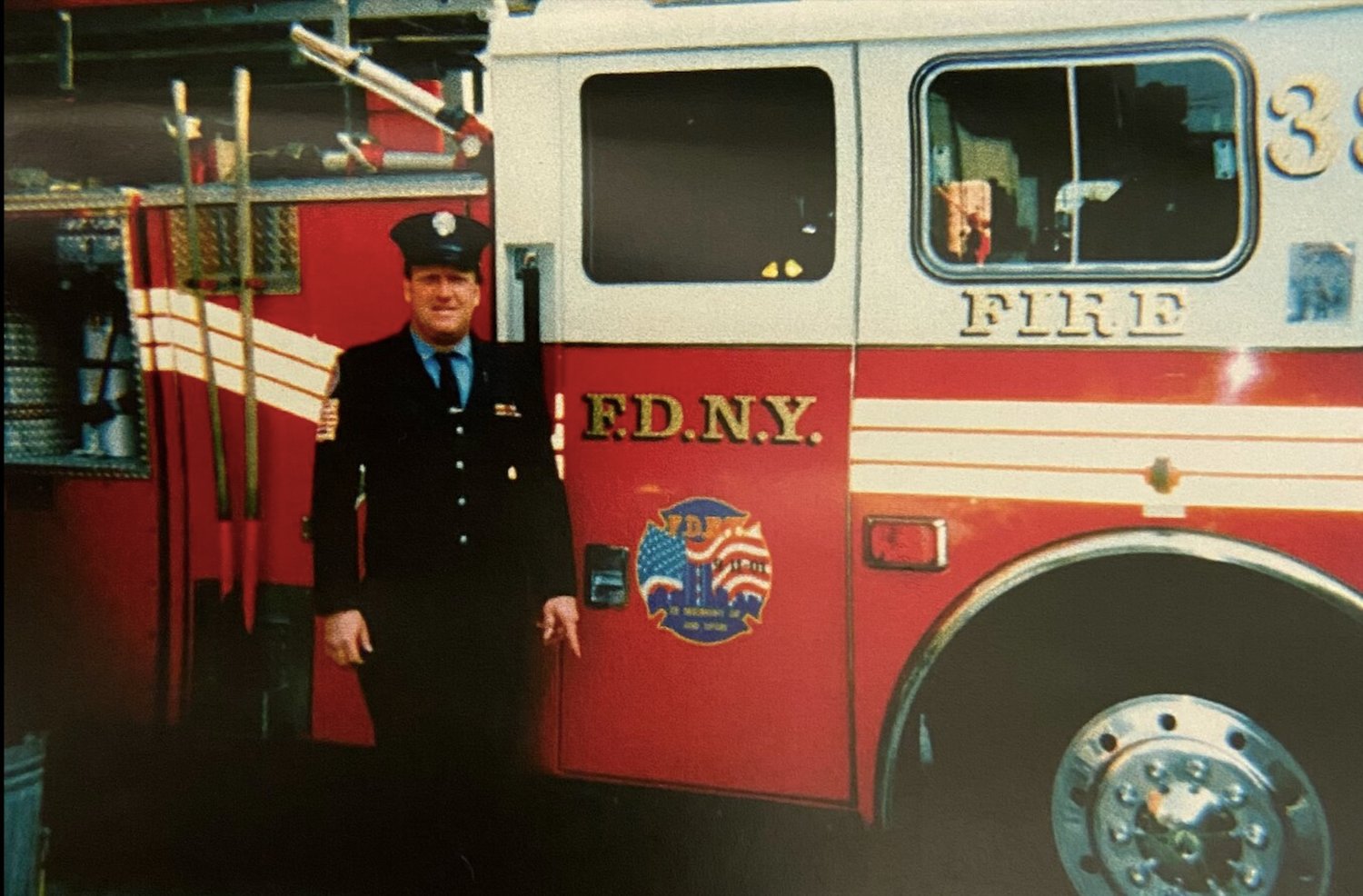 Daniel Monahan was an FDNY firefighter for many years before retiring in 1998. On July 9, Lydia Lane in Salisbury was dedicated in memory of him.
Courtesy Monahan family 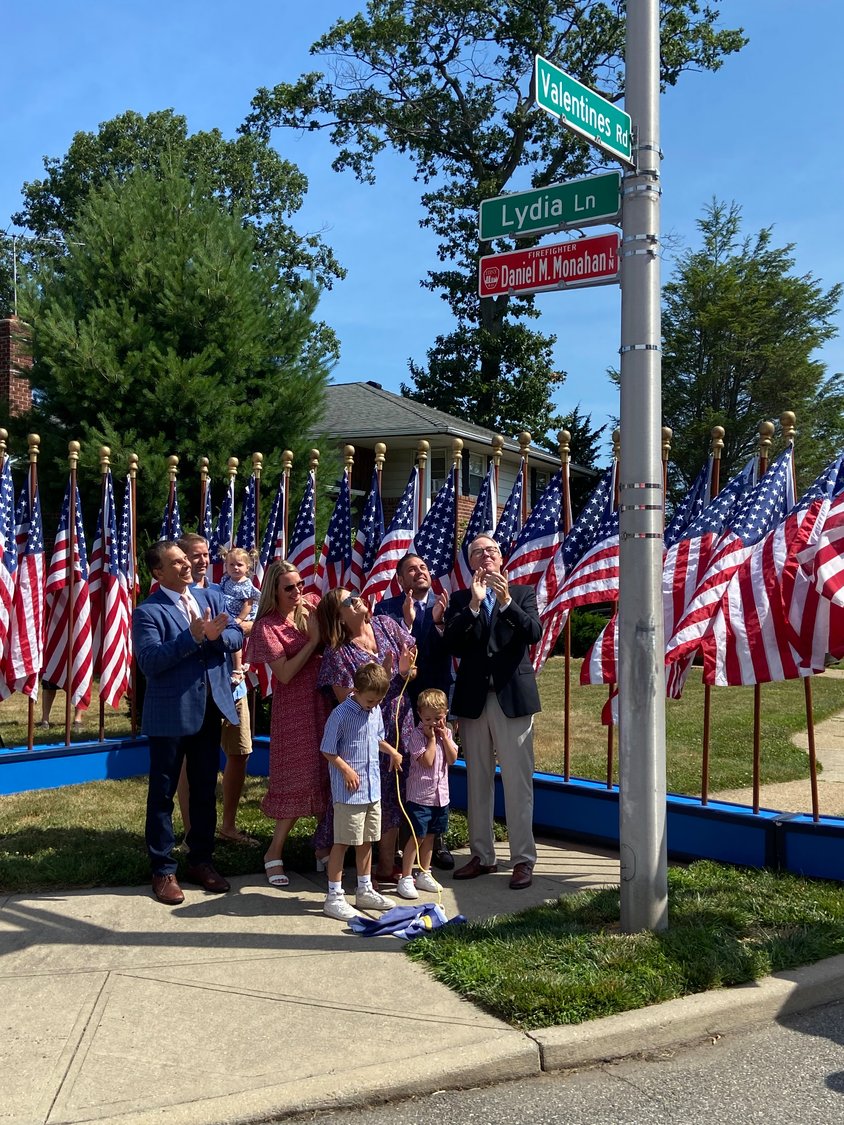 “He was afraid people wouldn’t remember him when he died,” Geri Monahan, Danny’s wife said. “But I would say, ‘Oh Danny, nobody will ever forget you.’” Danny died July 11, 2014, at the age of 57 after a battle with September 11 related Leukemia.

He started and raised his family in Salisbury on Lydia Lane. Now, family, friends, town officials and members of the FDNY gathered for the ceremony to have that street forever carry his name and to remember all the good he did.

Danny first volunteered at the East Meadow Fire Department before passing the FDNY test at 21. He started out with Engine 45 in the South Bronx in 1978 before moving to Ladder 38 where he stayed until he retired in 1998.

Danny and Geri were married in 1980 where they raised their daughter, Meaghan Gray.

“My father was a man of few emotions and even fewer words, but he was a man of a lot of heart, ambition and dedication,” Gray said. “My father was everything everyone and myself needed to feel safe, be rescued in times of need and be taken care of any emergency challenge or incident he was called.”

Gray, and her husband Brian, got the ball rolling last year to have the street named after Danny. The two announced the news to Geri at Christmas last year when 5-year-old Conor, Geri’s grandson, gave her a drawing. “I had it upside down, so I wasn’t really sure what it was,” Geri said. “And then I looked and I realized it was a street sign and it said Lydia Lane and then it said Daniel M. Monahan.”

Geri held off for eight years asking the Town of Hempstead for a street dedication because she wasn’t sure if it was what Danny would’ve wanted. “He was so humble about the fire department and things that he did,” Geri said. “Anyone who knows the fire department knows that they don’t consider themselves heroes and don’t really want to be known for that.”

Both Geri and Gray said as soon as September 11 happened, Danny was right there to help out with whatever was needed. He spent six months helping with recovery efforts.

Nick Arrigan, Danny’s cousin said that Danny was like a big brother and his childhood hero. “Growing up, I spent so much time on Land Lane, and I always loved it when (Danny) was around,” Arrigan said. “Anything he did, I thought was the greatest.

“To me, there was nobody better.”

Gray, a teacher in New York City, reminisced about her father coming to career day at the school where she taught. “A former student of mine, Justin Sanchez, was in seventh grade when my father came to Career Day,” she said. “It was the only class that ever got to meet my father in 2014.

“Fast forward six years later, and that same student reached out and asked me to write him a letter of recommendation for him to get into the EMT FDNY Academy,” she said. “Just a week ago, that same student sent me a photo of him and an EMT FDNY uniform and told me that meeting my father had helped him decide what he wanted to be when he grew up.”

Danny was a big hockey fan loving the New York Rangers, said Gray. “He’d be so happy to know that Conor took a shining to ice hockey,” she said. “He loved family, work, hockey, and a nice cold Budweiser.”
Gray mentioned how she wished that Danny met his grandchildren, Conor, Jack, 4 and Juliette, 1. “What I miss most is something I’ve never had a chance to see and that was him being a grandfather,” Gray said. “Or as we call him, Grumpy Do.

“Here’s to you, Dad, you and all of your love and strength and hard work will never be forgotten.”