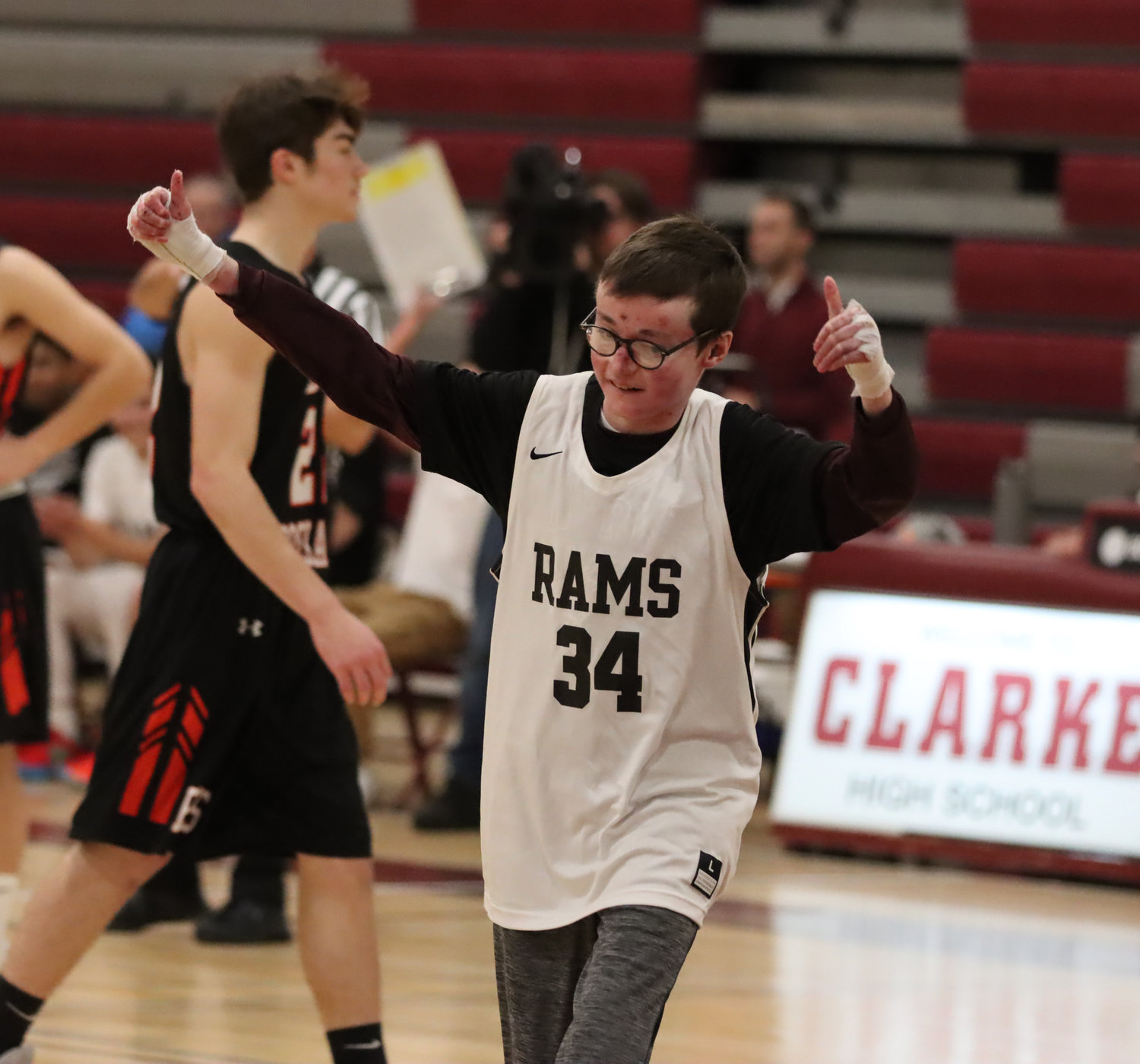 Robbie Twible ran onto the court when W.T. Clarke High School faced off against East Rockaway High School last Friday. The 17-year-old watches the games from the sidelines because he has a life-threatening skin disorder, but this time he shot, and scored.
COURTESY NAVRAJ SANDHU 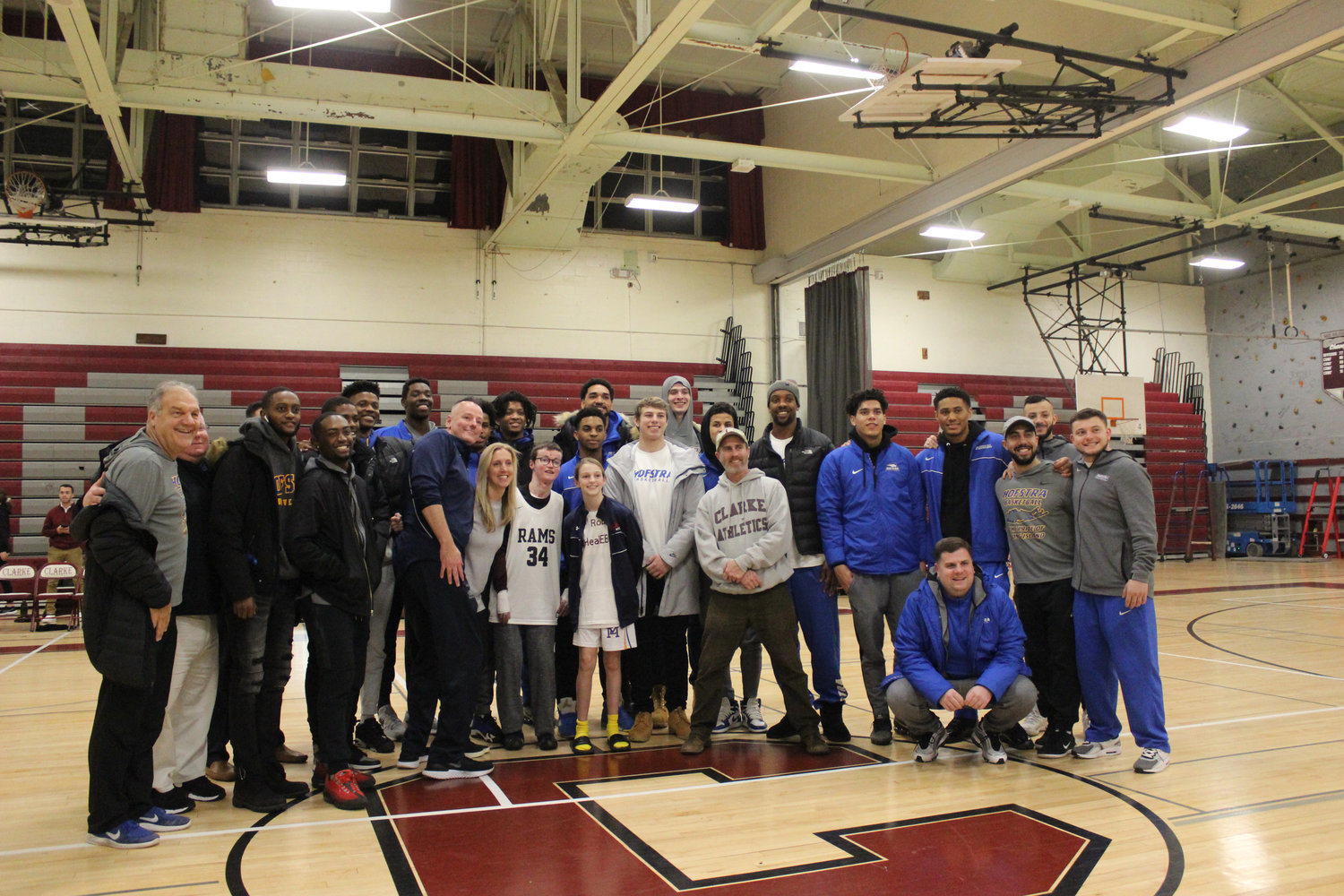 Members of the Hofstra men’s basketball team supported Twible, having adopted him as an honorary member in January 2017.
BRIAN STIEGLITZ/HERALD 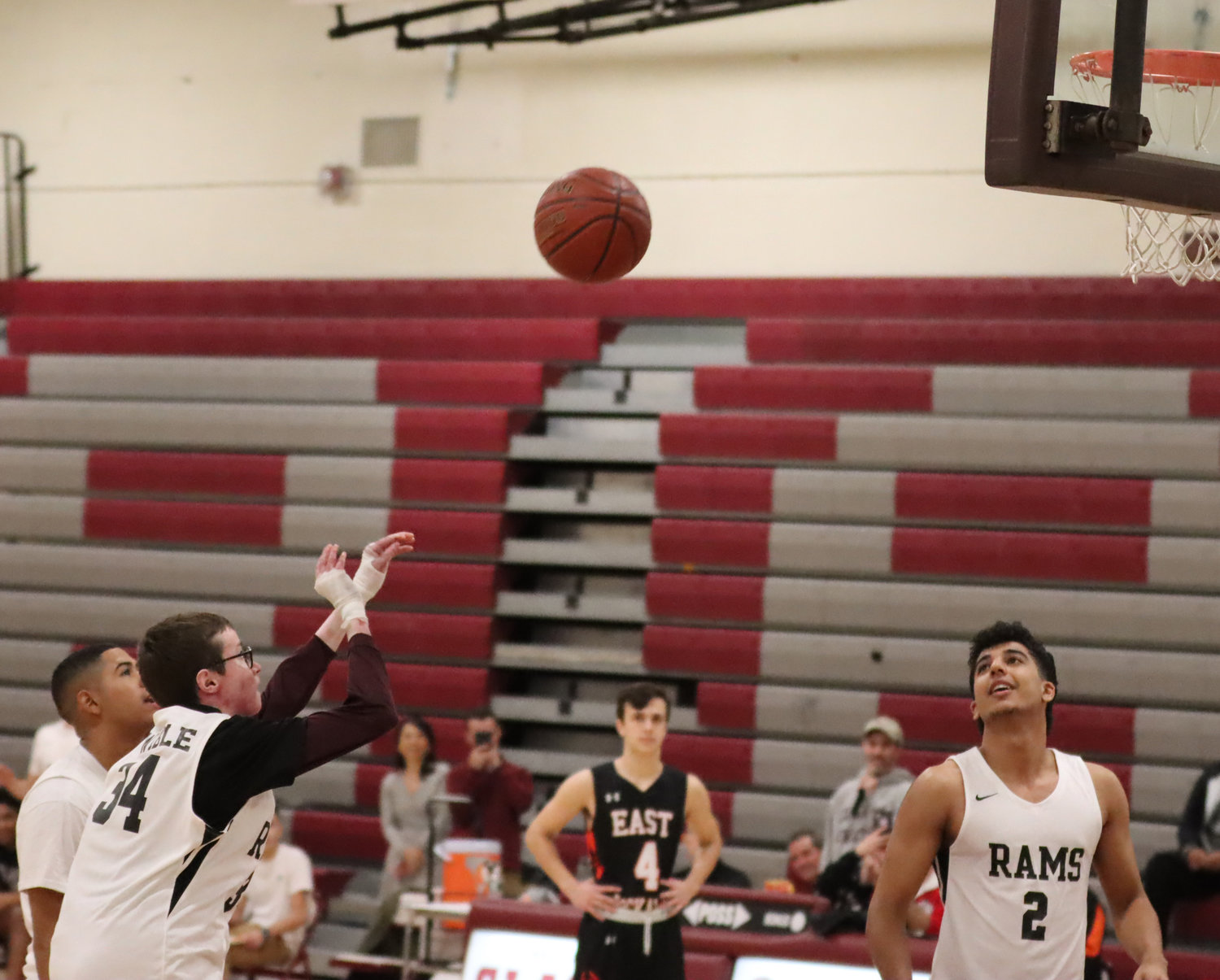 Twible never thought he would be able to play basketball. But on Dec. 13, he scored, and was met with cheers and applause.
COURTESY NAVRAJ SANDHU 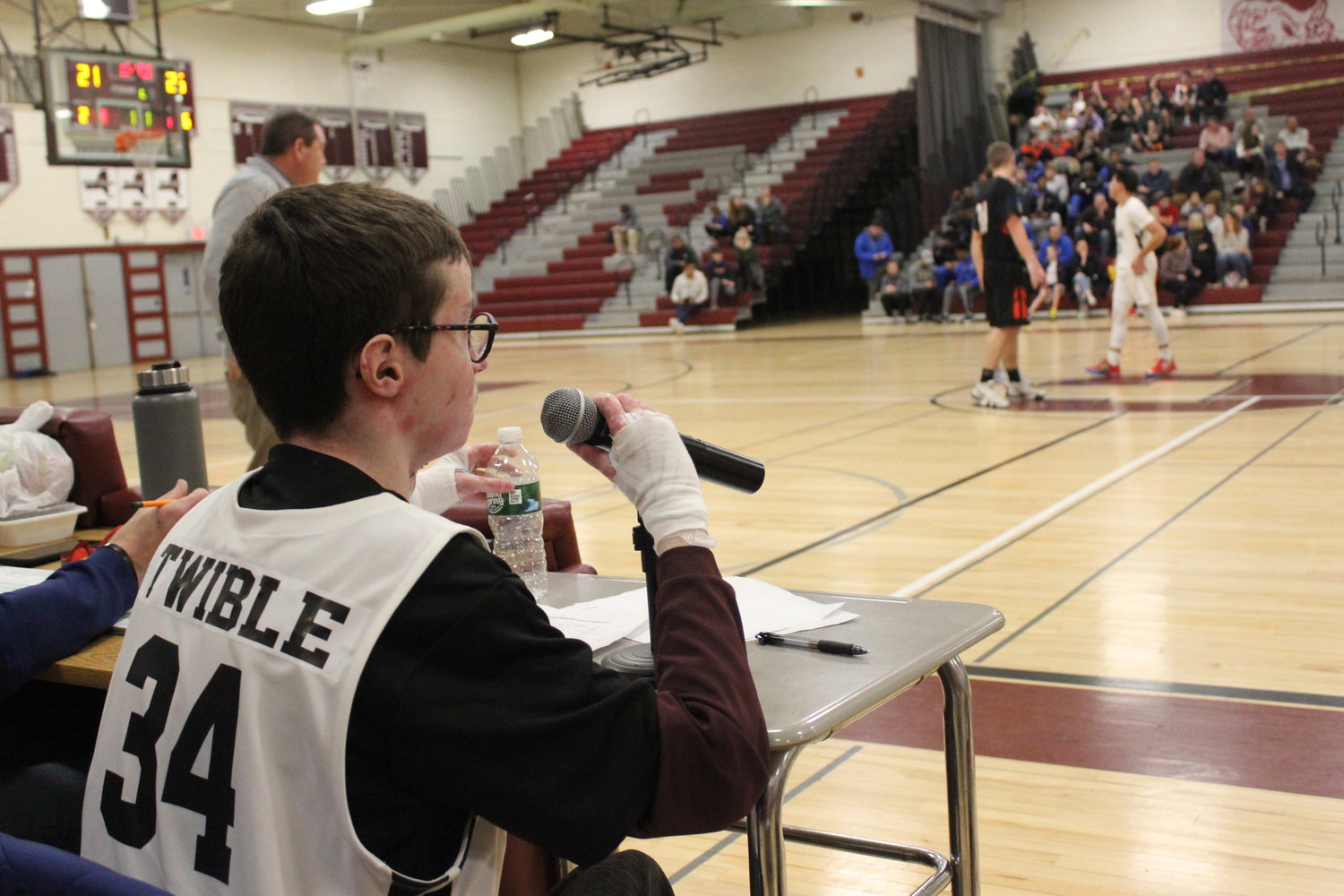 Twible has announced the games at W.T. Clarke High School since his freshman year.
BRIAN STIEGLITZ/HERALD
Previous Next
By Brian Stieglitz

Robbie Twible has been passionate about basketball since he was a child, despite knowing that he couldn’t play in a competitive game.

Born with a life-threatening genetic disorder called epidermolysis bullosa, Twible, who’s now a senior at W.T. Clarke High School, is covered with bandages, because his skin lacks a critical protein that binds its layers together. Twible has recessive dystrophic EB, one of the most severe forms of the disease, whose symptoms include extensive blistering on and beneath the skin.

But he hasn’t let the condition prevent him from pursuing his passion. And, his mother, Kathy, said, he has had plenty of support. Robbie, 17, has been the announcer for the Clarke boys’ basketball team since his freshman year, and did so for the girls’ team as well last year. At last Friday’s game against East Rockaway High, he was announcing the lineup for the Rams when he came across a familiar name: his own.

What Twible didn’t know was that both teams, their coaches and his parents were in on a plan to give him a chance to play in the game. When it started, Josh Freidman, Clarke’s athletic director, called Twible onto the court, the Rams were given possession of the ball and passed it to him. The players stopped to let him take shots until he scored, and he sank the ball on his third try.

“It’s always been a dream of his to play basketball,” said Robbie’s father, Robert, who has been the interim athletic director of Queens College since February 2018, after 23 years as assistant athletic director.

Robbie’s sister, Allison, has played basketball since she was in second grade, and is now a seventh-grade member of the varsity girls’ team at Woodland Middle School.

In addition to his announcing duties at Clarke, Twible is also the announcer for the Catholic Youth Organization league at his family’s church, St. Raphael’s Roman Catholic Church in East Meadow.

But Robert never thought he would see his son shoot a basket on his high school court. “This was absolutely amazing for us,” he said, choking back tears. “The team has always been very welcoming of Robbie, and has always taken good care of him.”

Robbie was just as awed by the experience. “It was amazing,” he said. “I can’t believe everyone kept it a secret.”

As part of the surprise, members of the Hofstra men’s basketball team stood in the fan section and roared their approval when Twible scored. He became an honorary member of the team in January 2017, connecting with them through Team Inspire, Motivate, and Play Against Challenges Together.

Team IMPACT, a nonprofit, connects children with chronic illnesses with local college teams and, as a frequent fan at Hofstra games, Twible knew he wanted to join the Pride when his family reached out to the organization. “It’s been life-changing,” he said. “The team is full of such great guys, and the coach, Joe Mihalich, is one of the nicest guy around town.”

Twible is an unofficial ambassador for those living with EB beyond his community, and has made an impression on, among others, Justin Timberlake and Ellen DeGeneres. His father had a colleague with connections to the Mets, who set up a meet-and-greet for Robbie at Citi Field in 2014. The New York Daily News covered the event and, in an interview, Robbie revealed that Timberlake was one of his idols.

It wasn’t long before Robbie got the chance to dance on stage with Timberlake at a concert in Manhattan that year. He also danced with the cast of “Jersey Boys” later in 2014, and appeared on an episode of DeGeneres’s “The Ellen Show” in February 2015.

Friends and family members say that Twible offers witty, sarcastic quips one minute, and in the next warms their hearts with his unrelenting optimism. “I’ve never seen him without a smile,” said Josh Freidman, Clarke’s athletic director. “He never complains. I wish everybody could be as tough as him.”

Twible treats his wounds and changes his bandages every day, but his parents don’t let his condition get in the way of his team responsibilities, and schedule his treatments around the squad’s practices. Sometimes, however, he has to take a break and relax his voice because his esophagus also blisters, Kathy said.

One in 20,000 people is born with EB, according to the EB Research Partnership, a nonprofit dedicated to funding research for and ultimately curing the disorder. The partnership has raised $25 million since it was founded in 2014.

Each November since 2013, Kathy has run in the New York City Marathon to raise money for the group, sporting a shirt with Robbie’s photo on the front and back. She is planning to run the United Airlines NYC Half-Marathon on March 15.

The Twibles know only a handful of other families in the tristate area who have children with EB. They met on Monday for the 10th year at a holiday party, paid for and hosted by the Veterans of Foreign Wars in Albertson. Although many of the other children with EB are younger than he, Twible enjoys being around them and has served as a role model for them, his mother said.

He is applying to local colleges, and hopes to pursue a career in sports broadcasting.