Veterans’ mental health at the heart of new county initiative 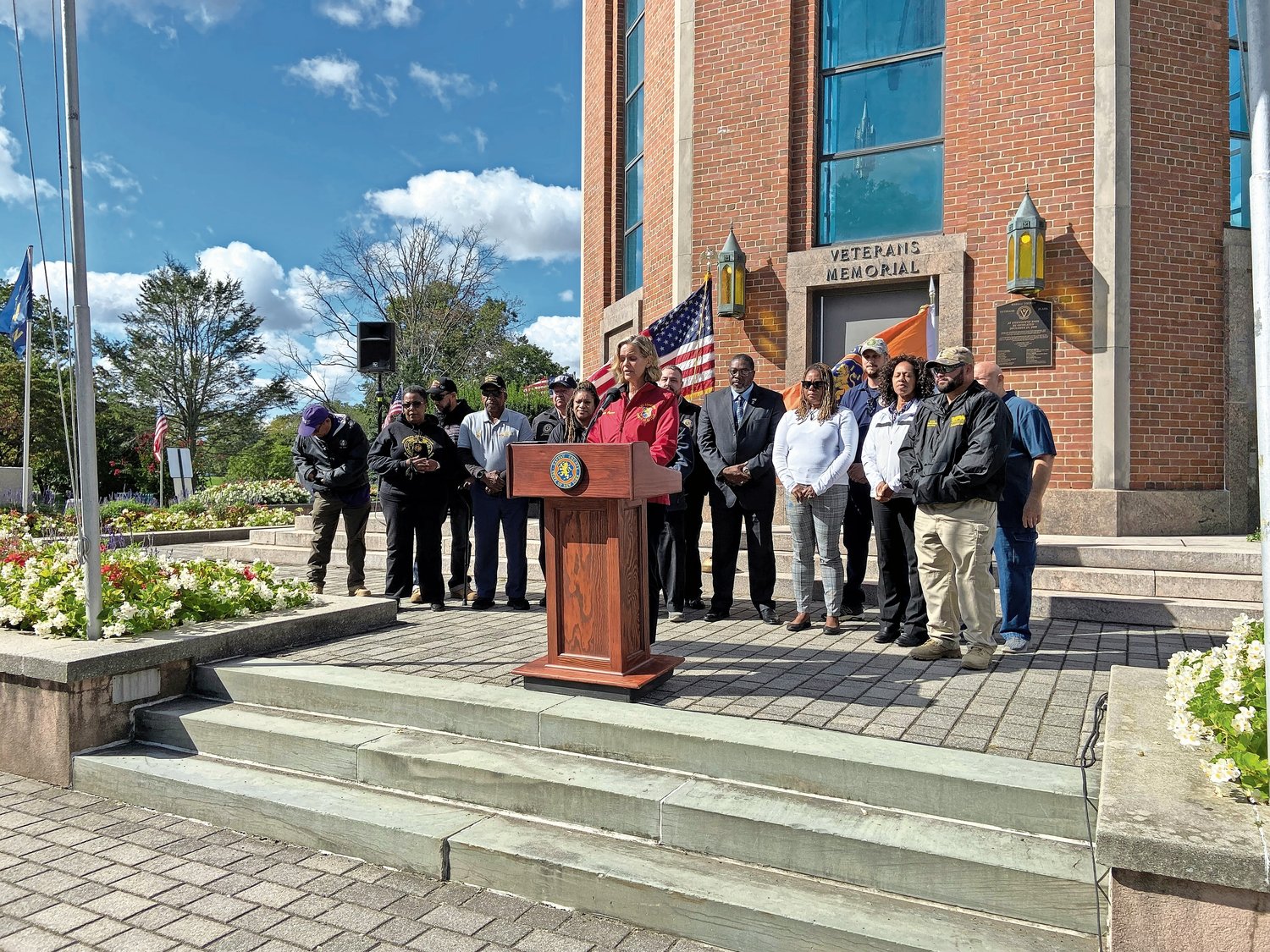 When East Meadow American Legion Post 1082 Commander Pete Wenninger served in the Navy in the 1970s, there was an understanding: Service members never asked for help. That often left them suffering in silence.

“An unspoken rule in the service is that you become so self-sufficient that you almost forget to ask for help,” said Wenninger, who served for six years after graduating from high school.

That notion can, however, often lead to mental health issues, even suicide. A report by the Costs of War Project at Brown University estimated that 30,177 active-duty military personnel and veterans who had served since the Sept. 11, 2001, terrorist attacks had died by suicide. In that same period, 7,057 service members were killed in military combat.

National Suicide Prevention Month concluded in East Meadow last Thursday at the Veterans Memorial field 7A in Eisenhower Park, where officials announced the mental-health support system for residents who are veterans.

The program, developed by the Mental Health Association of Nassau County, will use $250,000 in American Rescue Plan funding. At the event, County Executive Laura Curran said the county would hire two social workers for the Nassau Veterans Service Agency who specialize in helping veterans with crisis, substance-abuse and mental-health counseling. The service will be free for all veterans, regardless of how they were discharged. Services will be available Monday through Saturday.

“Our veterans face a tremendous amount of mental-health challenges and stressors, including [post-traumatic stress disorder], traumatic brain injuries, behavioral health problems, substance abuse, homelessness and unemployment,” Curran said. “Today we want to let all the brave men and women who stepped up and volunteered to protect our freedoms know that there is help.”

Wenninger said many veterans feel guilty because they made it back alive when their fellow soldiers did not, replaying the moves that they made in the heat of battle in their minds again and again.

“Those battleground scars that we receive don’t leave as quickly as they came,” Wenninger said. “We didn’t go in alone, and therefore we should be taught how to stick together when we come out and how to get help.”

VSA Director Ralph Esposito said that local veterans need the help. “A lot of our vets come back and hold things in, and they have to let it out, and we have to help them all we can,” Esposito said. “There’s too many of them walking around who need the help and are afraid to come forward.”

Steven Rose, a licensed social worker from East Meadow who works with Project Hope, a statewide crisis counseling initiative, said the most valuable part of getting help is talking and relating to those who have had similar experiences.

“I have a veterans group that meets virtually with about 25 veterans, and we help each other,” Rose said. “We can connect because we’re all vets and we help those get the more specific help that they need.”

Rose, a Vietnam War veteran who served with the Marines, said, “There’s a certain thing that happens where we say that we take care of ourselves. I saw it with other vets the first year I came back. We have to shift around that kind of thinking because it doesn’t help our vets.”

The coronavirus pandemic has also affected veterans of all ages, according to a recent study. A 2020 Wounded Warrior survey of post-9/11 veterans and service members found that 52 percent reported their mental health has worsened since social distancing was begun. About 30 percent reported suicidal thoughts in the previous two weeks.

“Some find it less manly to reach out and ask for help,” Wenninger said. “So, in that aspect, getting help should be way more encouraged these days.”

This is one of several programs that Nassau offers veterans. Vet2Vet program is a nationally modeled program aimed at reducing veteran suicide and substance abuse through peer support.

Curran also announced a picnic, open to all local veterans and their families on Oct. 23 from 11 a.m. to 2 p.m. at Eisenhower Park. The event will have free food, entertainment and an array of support services available for veterans.