A huge camera for a good cause 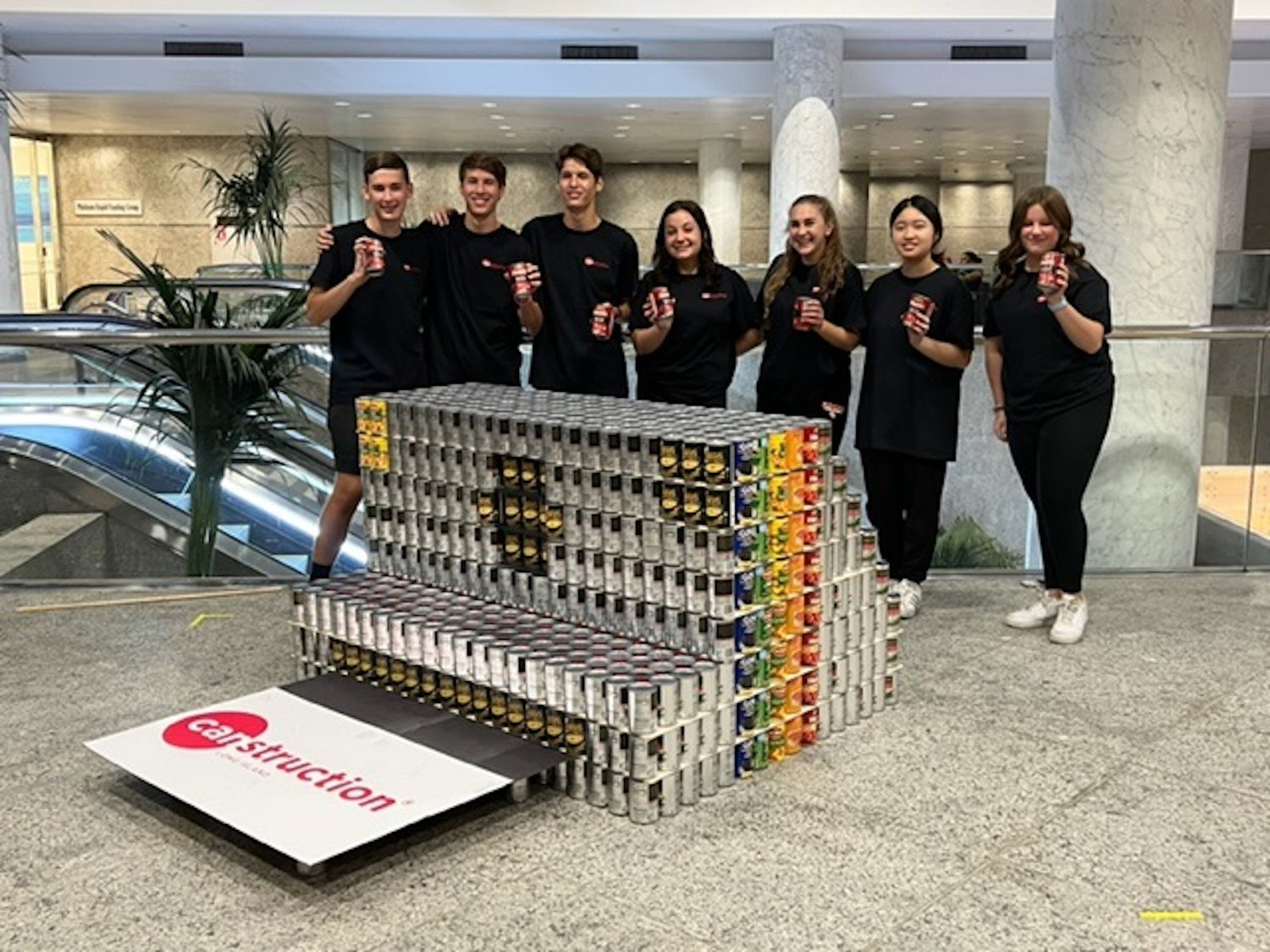 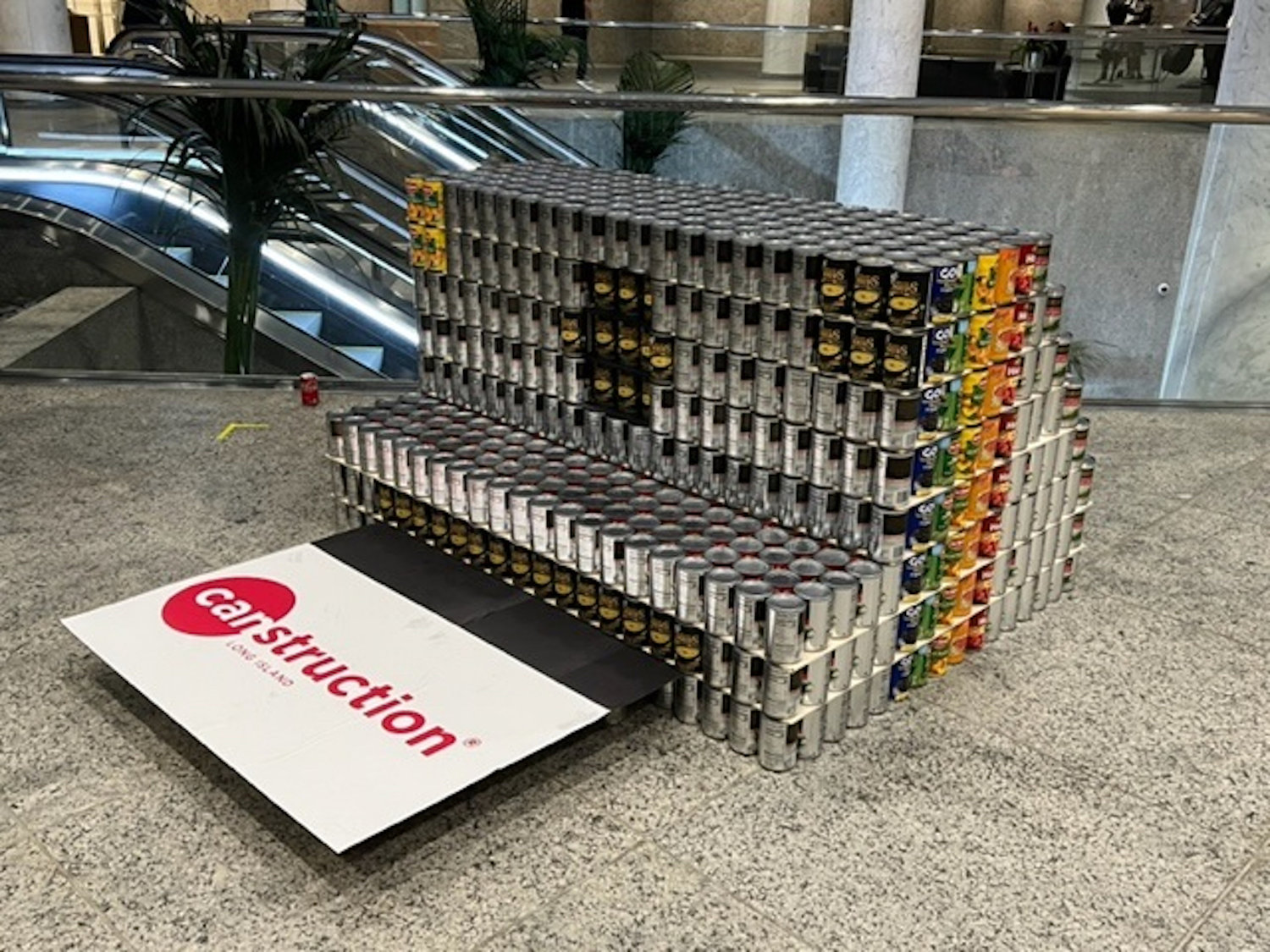 A close-up look at the award-winning sculpture of a Polaroid camera created by the East Rockaway High School team at the Canstruction Long Island competition.
Courtesy East Rockaway School District
Previous Next
By Ben Fiebert

Kathy Payne, a former teacher from East Rockaway High School, started the Canstruction team in 2018 and the team has won every competition since then.

The Canstruction Long Island student competition challenges participating teams to design and build a sculpture only using cans. Based on this year’s theme, “Picture a World Without Hunger,” the East Rockaway team used 1,678 cans to build a Polaroid camera.

This event also gives back to those in need as the cost of admission to view the Canstruction exhibit is one can of food, which is then donated to organizations that help feed the hungry on Long Island.

The sculptures are on display until Nov. 6 at the RXR Plaza in Uniondale.

The builds were planned out weeks in advance at the East Rockaway High School.

“The students do practice builds at the school so all the cans come in, they do their practice builds so they’re not up there thinking, ‘Uh oh, we didn’t plan for this,’” said Payne, who brought the competition to East Rockaway. The Canstruction organization provides the transportation for these cans to the Plaza.

“A few years ago, some of my co-workers and I went to the city to go see the big Canstruction build,” Payne said. “We wanted our kids to get involved in this and lo and behold, we started our own Canstruction team in 2018.”

This is an international competition, but East Rockaway High School competes on a local level. “This year, we were a little short on student teams,” Payne said. “I was a little disappointed for the East Rockaway team because they didn’t really have any competition.”

Payne loved the competitive aspect of this event as she believes that “there is nothing more satisfying than watching kids problem-solve among themselves.” She added that there’s a lot of technique that goes behind building these structures so that they are perfect.

“The students face challenges like making sure all of their can labels are turned the same way and if they are lined up the way they need to be,” She said.

According to Payne, the students undergo a different set of challenges every year forcing students to rely on each other. This competition involves teams of professional architects and engineers making it fascinating for people to watch.

Along with the competitive aspect, there is a huge learning curve for the students as well. Payne explained students are getting an early experience at STEM by constructing these builds.

East Rockaway students hosted various fundraisers throughout the year to collect all 1,678 cans used to build the Polaroid camera. Fundraisers include bake sales, a car wash, and a jeans day on which faculty chip in money so that they can wear jeans once a month. After raising the funds to buy the cans and then building the structures, the cans then get donated to local food banks.

“People can donate money and they can donate cans,” Payne said. Although the East Rockaway Canstruction team encourages people to donate cans, they have a very specific set of rules for which cans to donate.

“The challenge is that the labels in the can donations matter,” Payne said. “This is because they are part of the Canstruction design.”

“I decided this year to join the Canstruction committee and the committee participates in things like putting together all the baskets for the raffles on reception night,” Payne said.

There are professionals who have studied this sort of thing that work at the Long Island Canstruction.