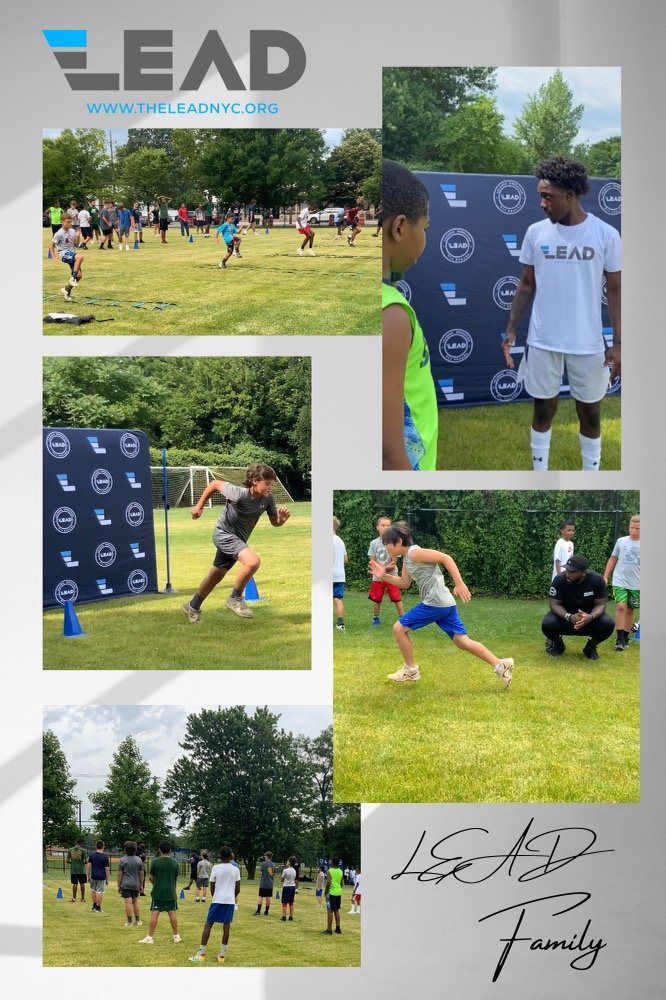 Athletes huddle around former college football star Jeremiah Brown during a clinic he hosts through his LEAD Initiative. Kids are participating in a LEAD clinic this week in Lynbrook.
Illustration courtesy Jeremiah Brown
By Brian Pfail

The LEAD Initiative is leading its way to Lynbrook, with a recent training camp at the Ocean Avenue soccer field that included a combine testing, 40-yard dash, and other types of clinics.

“Leaders Embracing All Dreams” is the dream of Jeremiah Brown, a former college football star who made his way to the Jacksonville Jaguars, only to be stopped short because of concussion issues. Football was everything he knew, and never expected it would end so soon.

Brown founded LEAD in 2016, and plans to return in the near future, bringing his academy, athletics and coaching programs with him.

“We have a holistic approach in which we do that through sports performance training, understanding conditioning — the physical aspect of it, Brown said. “And then the mental aspect, the social-emotional, leadership, (and) social-emotional intelligence.”

Sports had been Brown’s entire life, and he now believes that’s where many problems lie. He spent the next 10 years working everything from a special education teacher, athletic director, to school administrator. From all of that cam LEAD.

Brown has actually worked with someone from Lynbrook for about three years, and people within the community started to notice his athletic gains.

That was enough to encourage Brown to offer a free speed and conditioning clinic geared toward “run(ning) efficiently, and what it means to be a student.” At the core of it all, Brown presses on the potential of the young athlete, and how to maximize one’s potential as an individual.

“The kids, they lost a year of social-emotional intelligence,” Brown said. “Being at home for six to nine months, there’s a gap. So then the expectations can be that these kids should just know these things because they’re older and they should be wiser.”

In fact, LEAD is running a week-long camp through July 29 between 8 and 11 a.m. To learn more, visit TheLEADNYC.org.