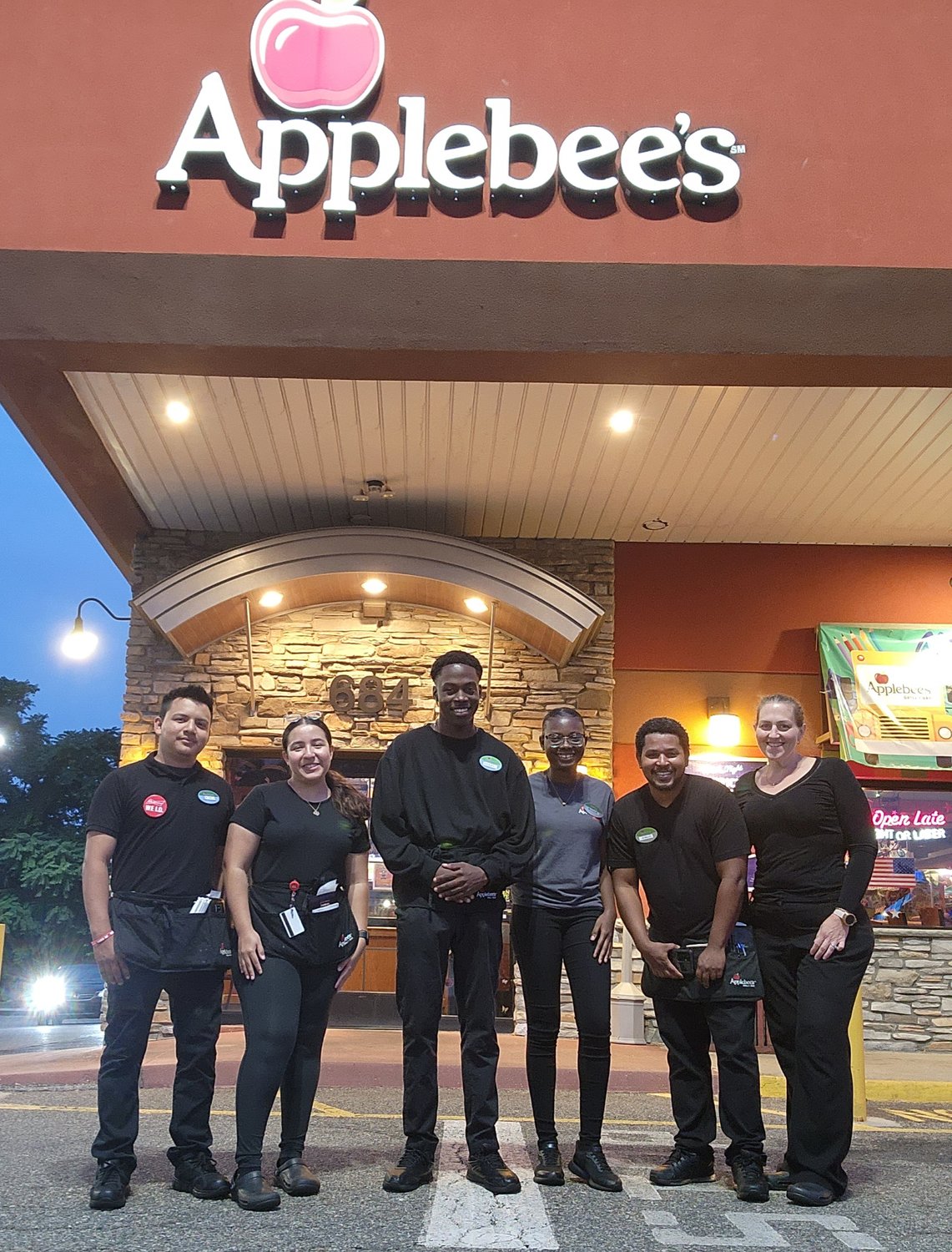 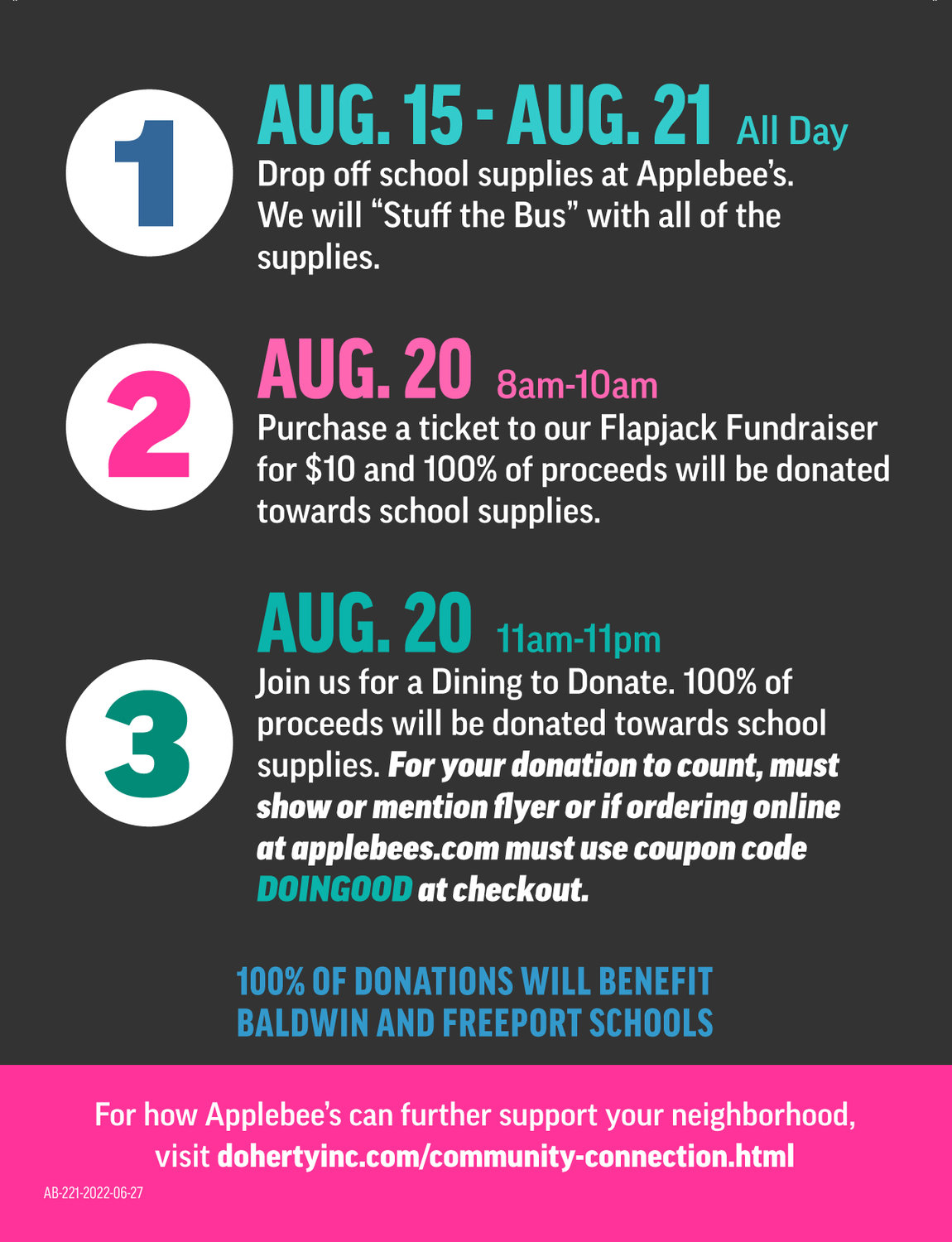 The Applebee’s in Baldwin will be hosting their first “Stuff the Bus” school supply drive with a week-long schedule of events and drop-off hours.
Courtesy Baldwin Applebee's 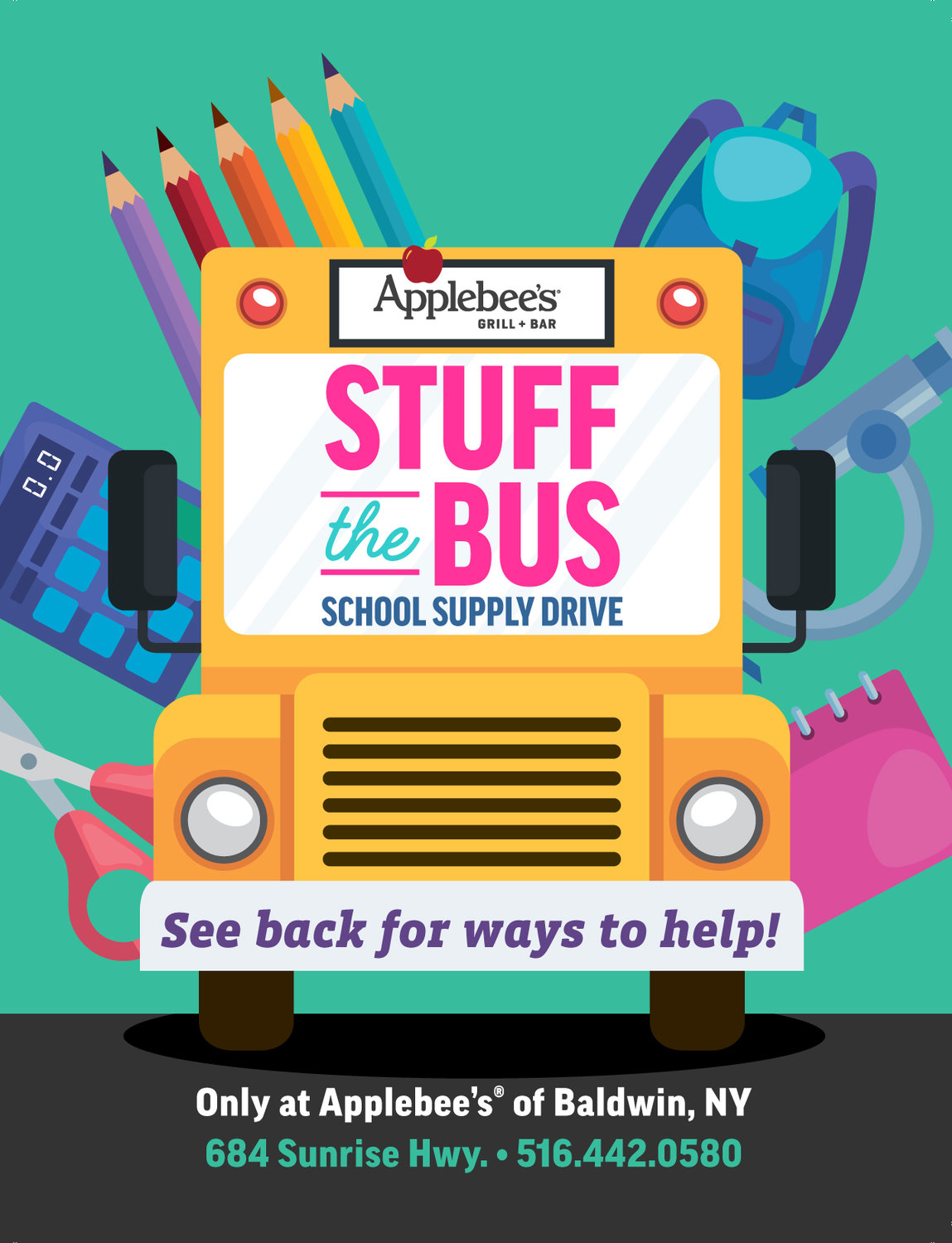 This month, Applebee’s Grill + Bar in Baldwin will hold a number of fundraising events to help Freeport and Baldwin schools.

A school supply drive branded “Stuff the Bus” will be held by the Applebee’s at 646 Sunrise Highway beginning on August 15 and running through August 21. School children in Baldwin and Freeport can stop worrying about school supplies this year courtesy to the Baldwin Applebee’s “Stuff the Bus! School Supply Drive.”

Colleen Haithman, supervisor and bartender at the Baldwin Applebee’s, is in charge of coordinating and executing the sponsored events. “Applebee’s is your neighborhood bar and grill, so the general manager decided to open it up to the Baldwin and Freeport school districts. So that is where the money that’s raised goes. That’s where any donations that are given will be divided in half and given to both school districts.”

The drive begins on Monday, August 15, at 11 a.m. Backpacks, notebooks, pencils, pens, rulers, and other school items can be dropped off at the restaurant, 684 Sunrise Highway, Baldwin, every day until midnight. The initiative is to drop off school supplies at the Applebee’s where they will “stuff the bus” with all of the supplies to be donated to the two school districts.

The effort will continue through Sunday, August 21.

“Any type of school supplies are encouraged, so it can range from pens and pencils and sharpeners and erasers to Kleenex and paper towels or hand sanitizer. Things along those lines that the schools ask for, anything a classroom might need,” said Haithman.

The second option to participate in the charitable events is to purchase a ticket to the Flapjack Fundraiser. On Saturday, August 20, 8-10 a.m, the Applebee’s restaurant will offer a pancake breakfast as part of the School Supply Drive. Stop by the restaurant during those two hours, buy a $10 ticket, and then surrender it at the counter to have your breakfast.

The revenue from the tickets will be used to purchase additional school supplies for the districts. At this event, photos will be taken, raffles will be held, and Freeport Girl Scouts will volunteer to give out temporary tattoos to children. Staff encourages anybody interested in attending the event to call the restaurant ahead of time to secure a table or to swing by and purchase a ticket prior to the pancake breakfast.

Then, on the same day, from 11 a.m. to 11 p.m., if you bring in your flier or mention the contribution event whether eating in or ordering to go, 10 percent of proceeds from your check will benefit the Freeport and Baldwin School Districts. If ordering online at applebees.com, enter the promo code DOINGOOD at the checkout.

“I think it’s us giving back to them to say thank you for, you know, what they’ve done for us, you know, during this whole COVID scene,” said Haithman, “Honestly, without them coming in supporting us, we would not be able to stay afloat during this time. So, it’s just a way for us to give back at the moment.”

For further information on any of the events, contact general manager Kevin Murray at the Baldwin Applebee’s at (516) 442-0580.