Lynbrook honors those lost on 9/11 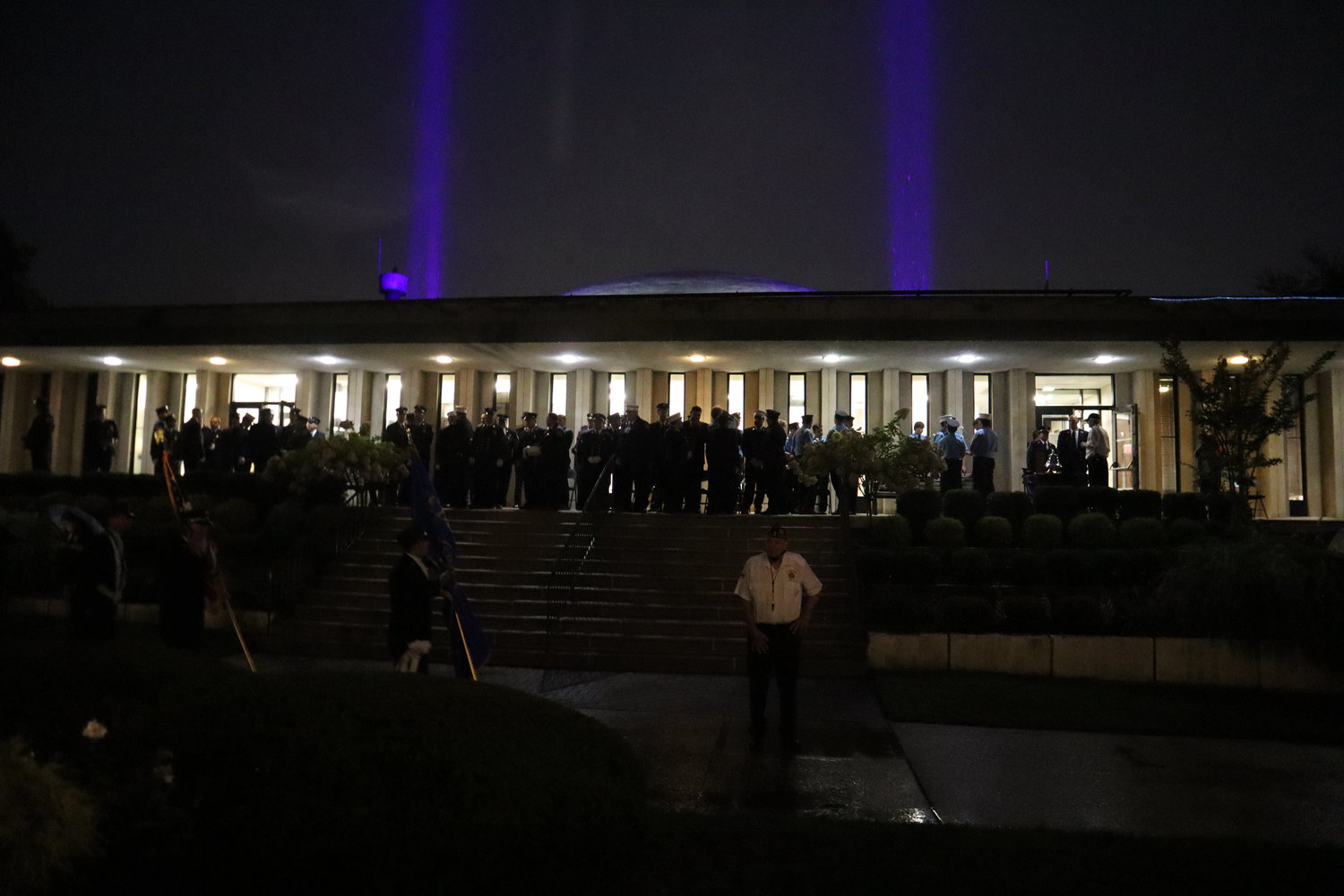 Members of the Lynbrook Fire Department and Police Department gather outside Village Hall, as the two tower lights shine brightly, illuminating the heavens in memory of those lost on 9/11.
Daniel Offner/Herald 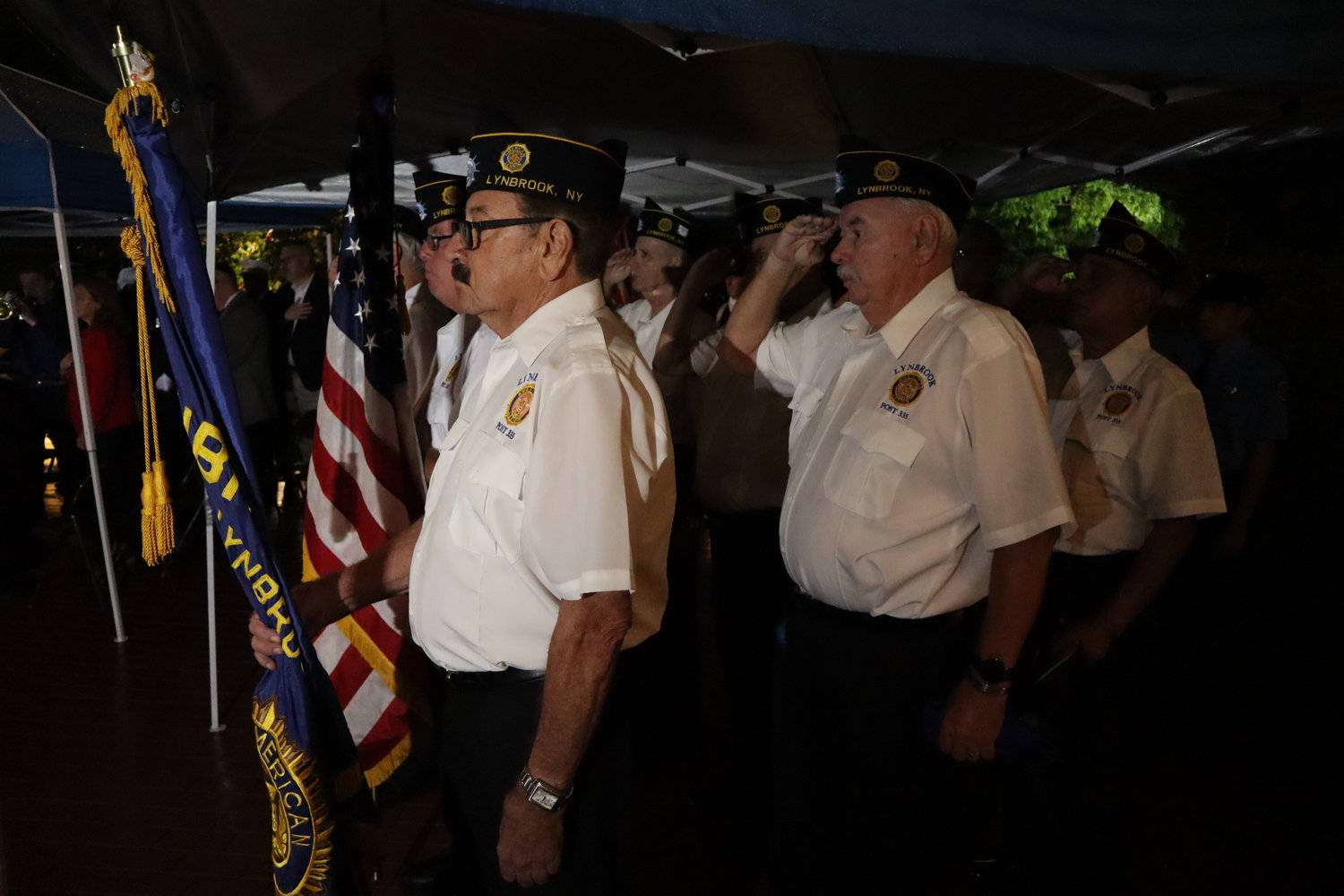 Members of Lynbrook American Legion Post No. 335 present the colors to start the ceremony on Sunday night
Daniel Offner/Herald 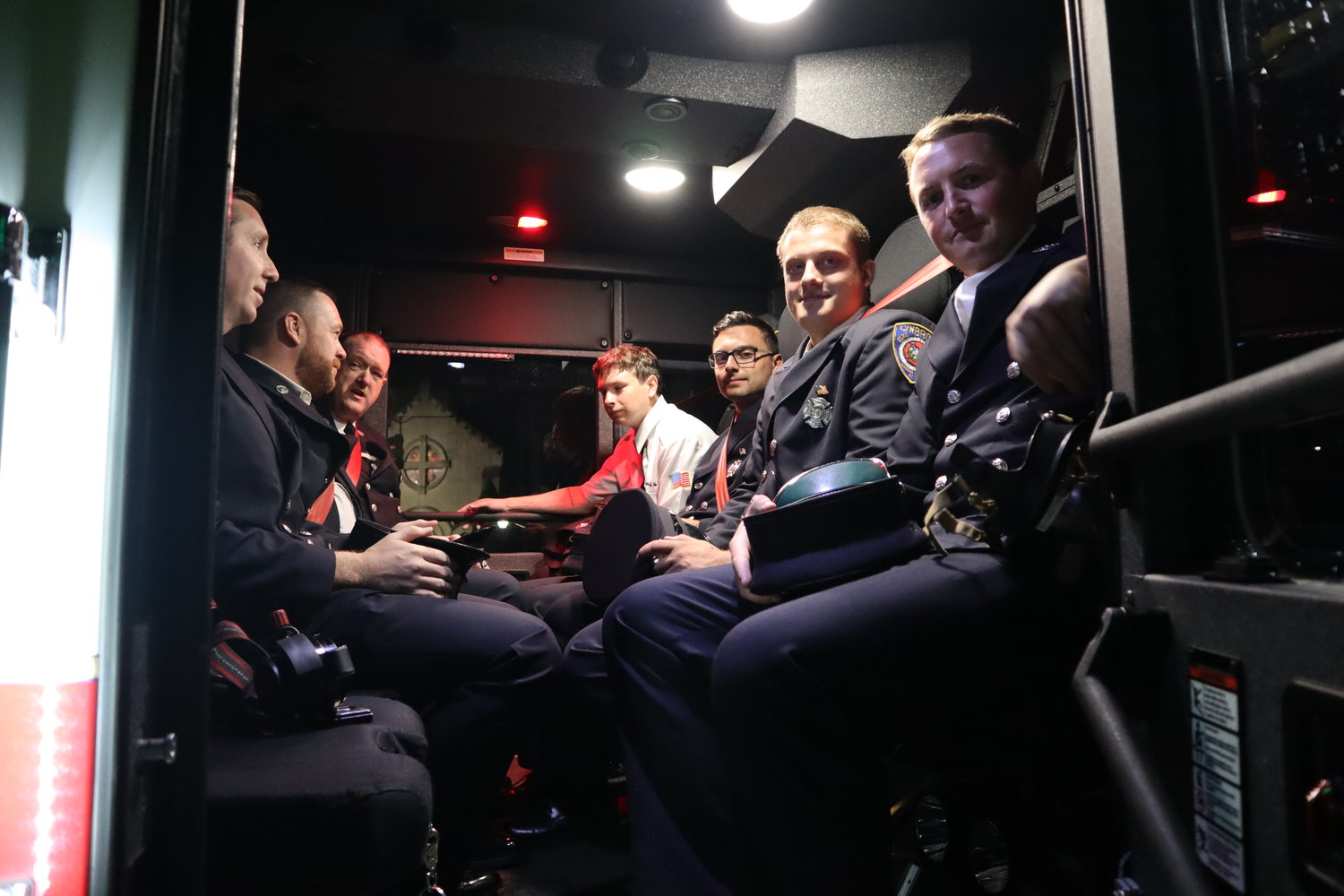 Lynbrook Fire Department’s Engine Company No. 1 strap themselves into the truck following the 9/11 ceremony.
Daniel Offner/Herald 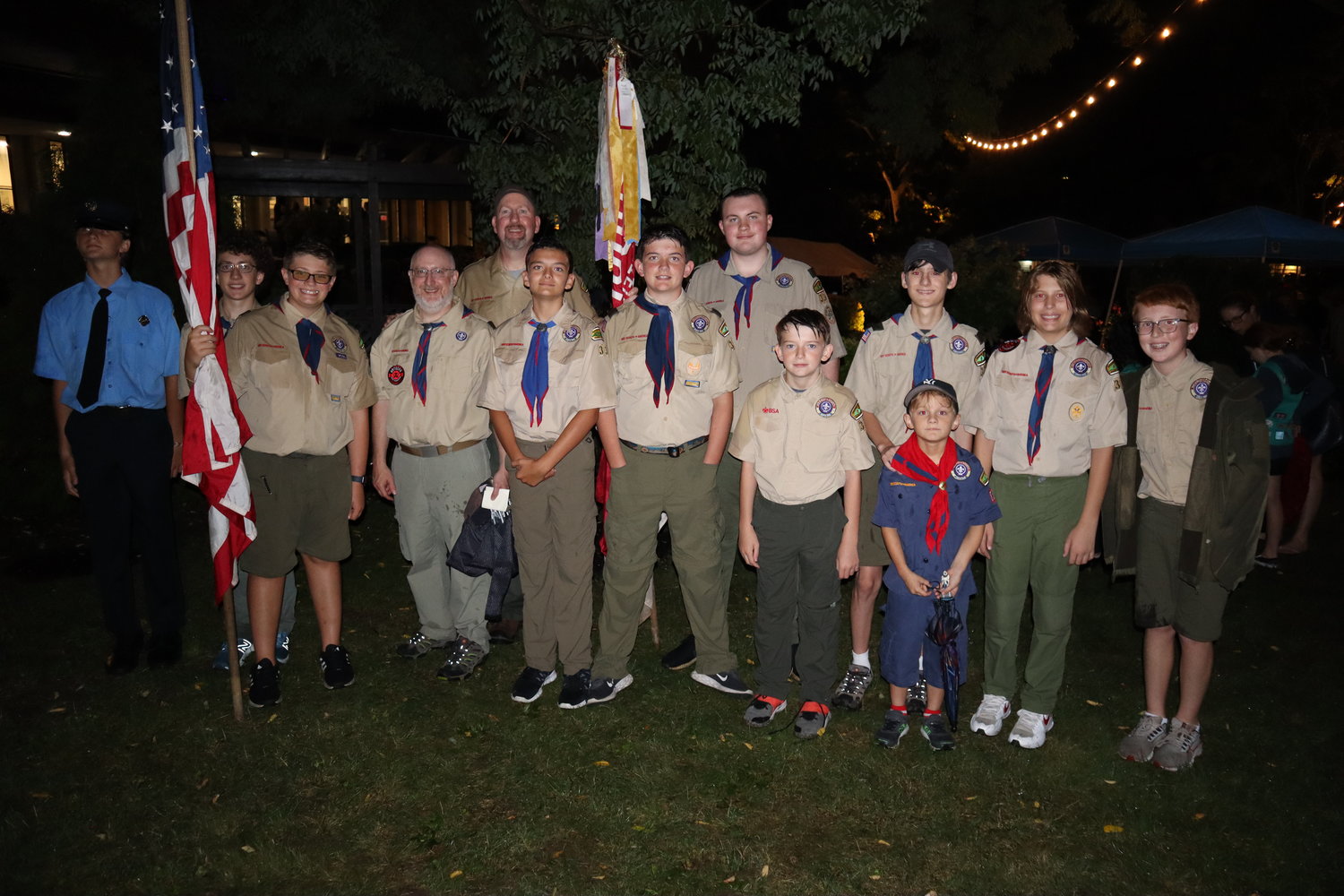 Boy Scout Troop 336 in Lynbrook pitched in to assist in setting up for the 9/11 ceremony on Sunday night.
Daniel Offner/Herald 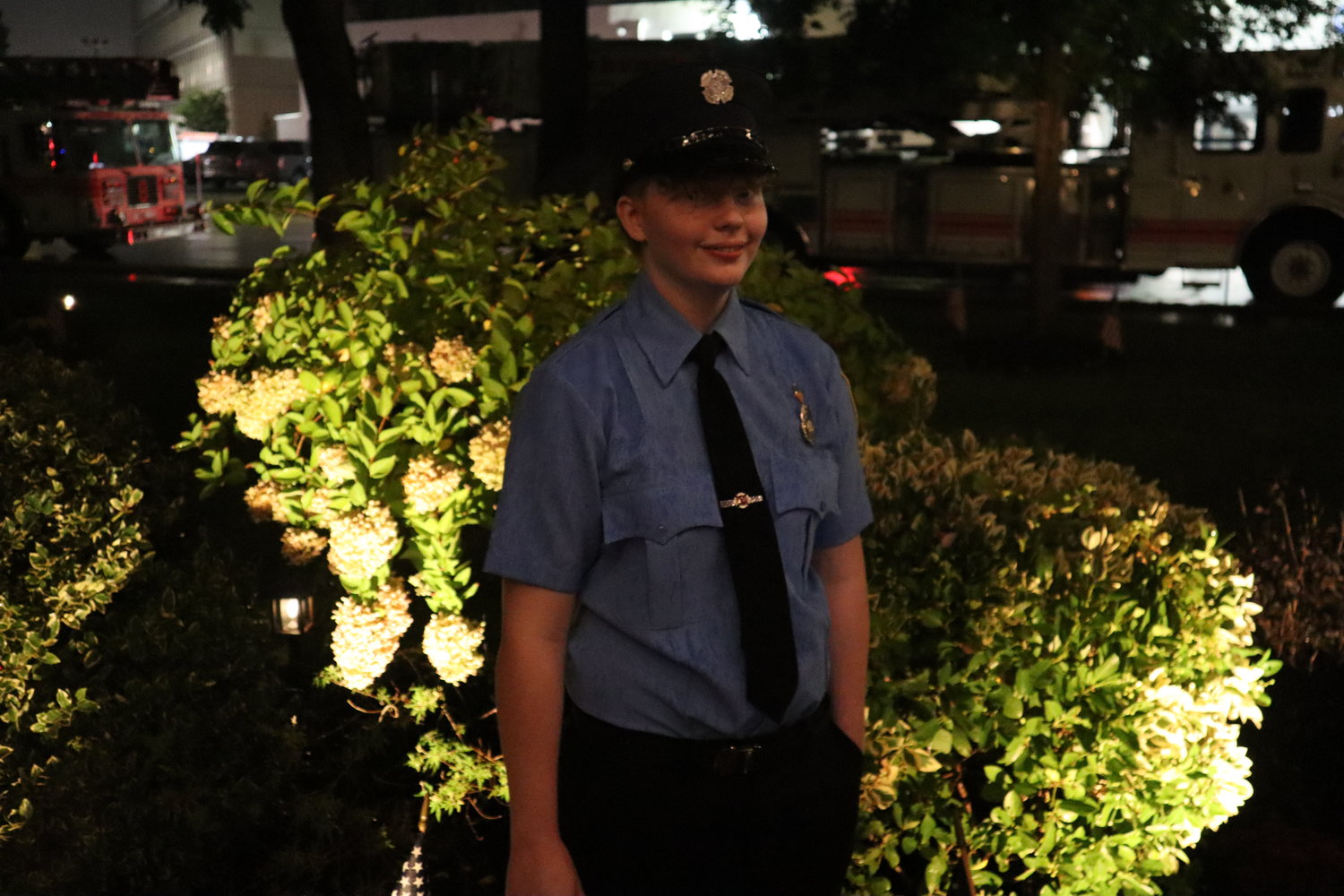 Junior Firefighter Julia Redash lays a white rose on one of the 20 memorial stones honoring the lives lost on 9/11.
Daniel Offner/Herald 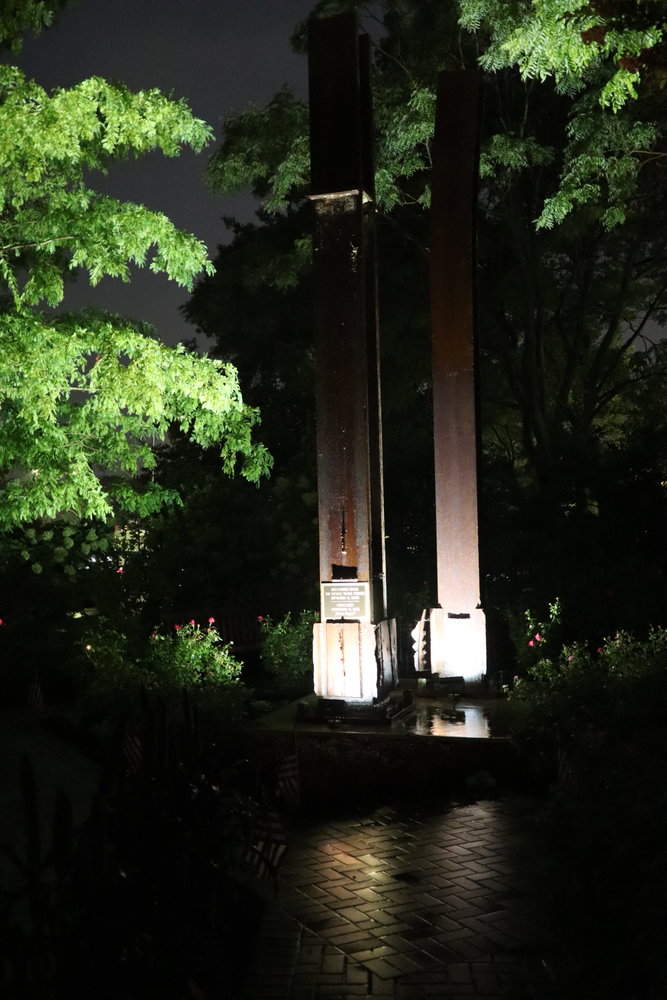 A piece of the wreckage from the World Trade Center towers stands as a reminder of all the lives lost on 9/11 and the many brave men and women who rushed headfirst into danger to help others on that day.
Daniel Offner/Herald 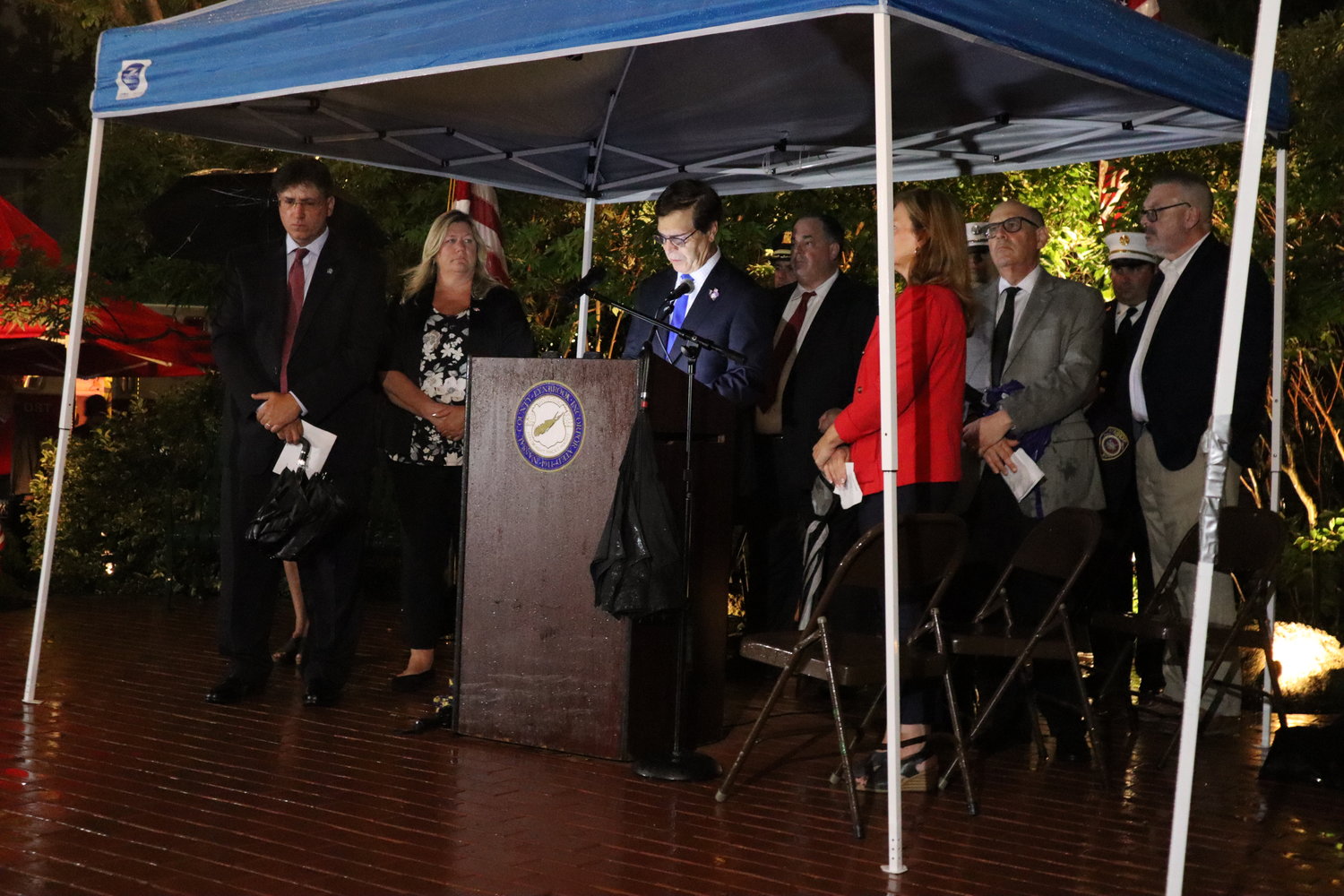 Lynbrook Mayor Alan Beach and members of the Board of Trustees gather for the start of the 9/11 memorial ceremony.
Daniel Offner/Herald
Previous Next
By Daniel Offner

It has been 21 years since the Sept. 11, 2001, tragedy, when two commercial jetliners were hijacked and sent crashing into the World Trade Center, causing the two historic towers to come crumbling to the ground in a cloud of dust and debris and claiming the lives of 2,977 people, including 20 from Lynbrook.

The impact of those terror attacks and the rescue efforts that followed was felt by local communities across the metropolitan region and beyond.

To honor the memory of those who lost their lives on that fateful day, the Village of Lynbrook held its annual ceremony on a rainy Sunday evening at the Memorial Garden behind Village Hall.

Lynbrook Police Chief Brian Paladino and Lynbrook Fire Chief John Donald opened the ceremony by leading the Pledge of Allegiance, followed by a rendition of the national anthem performed by Toni-Ann Butler. Deacon Kevin McCormack of Our Lady of Peace Roman Catholic Church delivered the invocation.

“Twenty-one years ago, many of us remember our ‘Day of Infamy’ was like nothing we could have imagined and it left an indelible mark on all our souls,” McCormack said. “And yet for the young, those under 25, it has become another historical date, like the Kennedy assassination, Pearl Harbor and World War I. But for we who remember, we do so with the advantage of faith. This night as we remember, for we will never forget, we pray for those who lost so much and we pray that our lord will continue to guide and protect us.”

Lynbrook Mayor Alan Beach followed, sharing how he still remembers exactly where he was and what he was doing on that fateful morning. He was installing new windows in his sunroom when his neighbor, Dan Goldberg, came running over telling him that all of the Lynbrook firemen were dispatched into the city after reports of a plane crash in lower Manhattan.

“We all have our own memories of that day and the aftermath,” Beach said. “If you're like me, you can't think about that day without feeling a deep pain in your heart. You cannot remember without tearing up or holding your breath.”

Beach said that while the memories of that day remain etched in the minds of those who lived through that day, more than eight million young people under the age of 25 have no memory of what took place.

“And what is it that we are to remember? What are we to tell those young persons who don't have a personal memory at all?” Beach asked. “Lessons from that day are simple, perhaps what we should take away or remember are really three things.”

First, he said, people must remember the nearly 3,000 victims, of all different color, religion, political persuasion, ages, and beliefs were taken on that day. Second is to remember the immediacy and the courage of the first responders and the others who dropped everything to help.

And lastly, he said we are to remember how Americans came together in grief and state, “this shall not stand.”

Liam Mylan sounded the bell and played taps in recognition of all the servicemen and women from the VFW Post who fought overseas to American freedom.

A moment of reflection and silence was followed by a performance of “Amazing Grace,” by Peter Ledwith.

Rabbi Dennis Ross of Temple Am Echad closed the ceremony with a final prayer.

“Even as we mourn those who died and pray for the recovery and well being of those who continue to struggle in body and spirit, we take comfort and hope in the goodness to share and receive among those around us -- our neighbors, coworkers, family and those who we work for and who work for us and tonight the supportive Lynbrook community,” Ross said. “Let us take comfort and grace in the emergency service workers, health care providers, community leaders and others who came forward 21 years ago and the many who continue to serve today.

“As we resolve ongoing remembrance and reflection, may we also continue to offer ourselves to others and to receive their kindness with understanding and presence with openness, reciprocity, love and peace.”

Butler, then, concluded the service with a riveting performance of  “God Bless America.”

Throughout the event, the twin lights affixed to the roof of Village Hall shined brightly into the heavens, as the crowd listened intently.

Brian Brown, the captain of the Fire Department’s Truck Company, and his wife, Renee, led the campaign to raise money to purchase the twin tower lights for the 9/11 event. More than 250 residents would follow, donating nearly $13,000 to purchase them after only a year of fundraising.

The village plans to continue to shine these lights brightly every Sept. 11 to remember those who were lost.