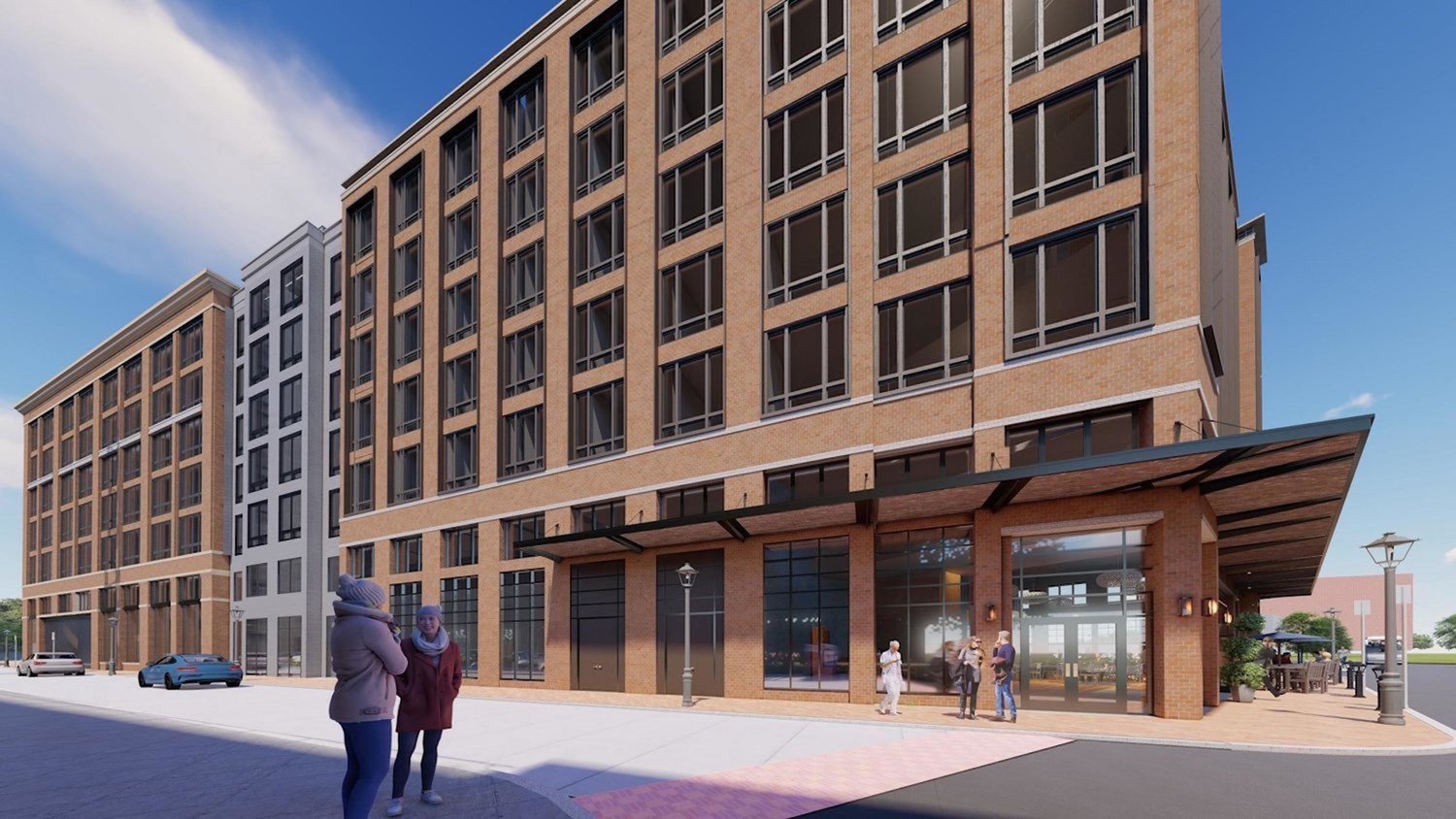 Village officials and developers want to raze the vacant Mangrove Feather factory in July to make way for a new apartment complex.
Courtesy Breslin Realty
What they want to build there

Langdon Apartments, at 4347 Broadway, is proposed as a 278,000-square-foot development with more than 200 apartments. More than half will be one-bedroom units, while the rest will be studios or two-bedrooms.

The seven-story complex will offer two floors of parking — enough to fit more than 200 cars. Amenities are expected to include a retail café, clubroom, concierge, rooftop terrace with grill, lounge, party room, a spa, a dog run, and a gym.

Some planning experts have said the complex will add a little more than a dozen children to the school district — a figure that is relatively low because most of the apartments are studios and one-bedrooms, without sufficient room for families.

The Town of Hempstead Industrial Development Agency approved a 30-year payment in lieu of taxes — or PILOT — agreement last November. That would freeze the annual tax rate at about $185,000 for each of the first three years, then jump to $200,000 in the fourth. It will then jump to $1 million after 16 years, and $1.8 million after 30 years.

Developers seek to demolish the former Mangrove Feather factory, on Broadway in Lynbrook as early as next month, and replace it with a $95 million, 201-unit transit-oriented apartment complex dubbed the Langdon Apartments.

It’s a project welcomed by Lynbrook mayor Alan Beach. “I’m looking forward to the demolition of the building,” he said, “and the new project being started.”

Several administrations sought to redevelop the long-vacant factory. After years of trying to convince property owner Barry Singer to sell, Breslin Realty stepped in five years ago with plans to convert the industrial land into a high-density residential complex.

Breslin has partnered with Fields Grade Development to build a 278,000-square-foot development filled primarily with one-bedroom units. But there will be a handful of studio and two-bedroom apartments as well.

Along with razing the old factory — which has been dormant since 2008 — developers will also tear down a two-family home nearby on Langdon Place as well as a warehouse on Saperstein Plaza.

Construction could take up to two years to complete.

Beach and Building Department Superintendent Brian Stanton said they could not offer a definitive date for razing the vacant factory, because National Grid and PSEG still had to disconnect power. Stanton said he hoped the building could be demolished by mid-July, but noted there could be setbacks.

David Orwasher, Breslin’s chief development officer, did not return calls requesting comment, but he told the Herald last March that he was excited to usher in a new era for the community.

“We’re happy and proud to be a contributor to the revitalization of the walking downtown in the Village of Lynbrook,” Orwasher said. “We do think that this is a noble project that will add value across the board to the residents of Lynbrook by developing a quality project and replacing a derelict structure for nearly a dozen years that is an eyesore and a practical drag on the current downtown environment.”

Breslin has even secured additional financing for the project from San Francisco-based investment firm PCCP, which provided $22.7 million in funding. PCCP boasts more than 1,000 investments on its website, with nearly $17 billion in assets under management.

“PCCP believes this investment presents a compelling opportunity to work with two local, highly experienced developers for the construction of a top-of-market, transit-oriented multifamily community in a very supply constrained market,” Brian Haber, a senior vice president for the firm, said in a statement.

The Town of Hempstead Industrial Development Agency approved a 30-year PILOT — or payment in lieu of taxes — for the development last November.

Fred Parola, IDA’s chief executive, says he believes the project would help the village while still making significant contributions to Lynbrook’s tax base.

“It’s a positive from all standpoints,” he said. “I know the village is very much in favor of it, cleaning up a particular area, and bringing new people into the area. So, it’s a win-win as far as we can see.”