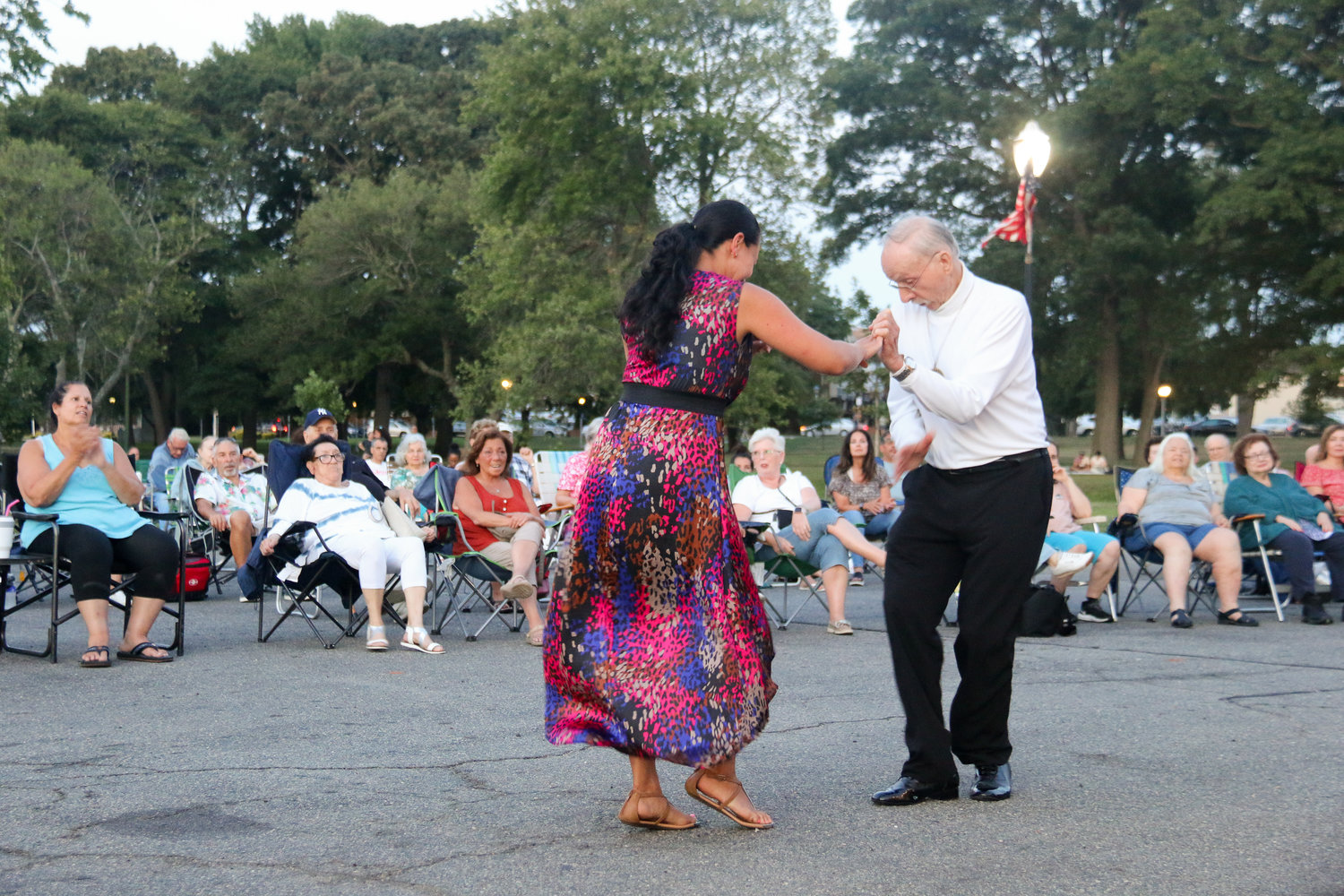 Gaetano Ferrara, known as the Mambo Man of Valley Stream, danced with partner Karina Hernandez at the Bronx Changa concert at the Village Bandshell, near left.
Tim Baker/Herald 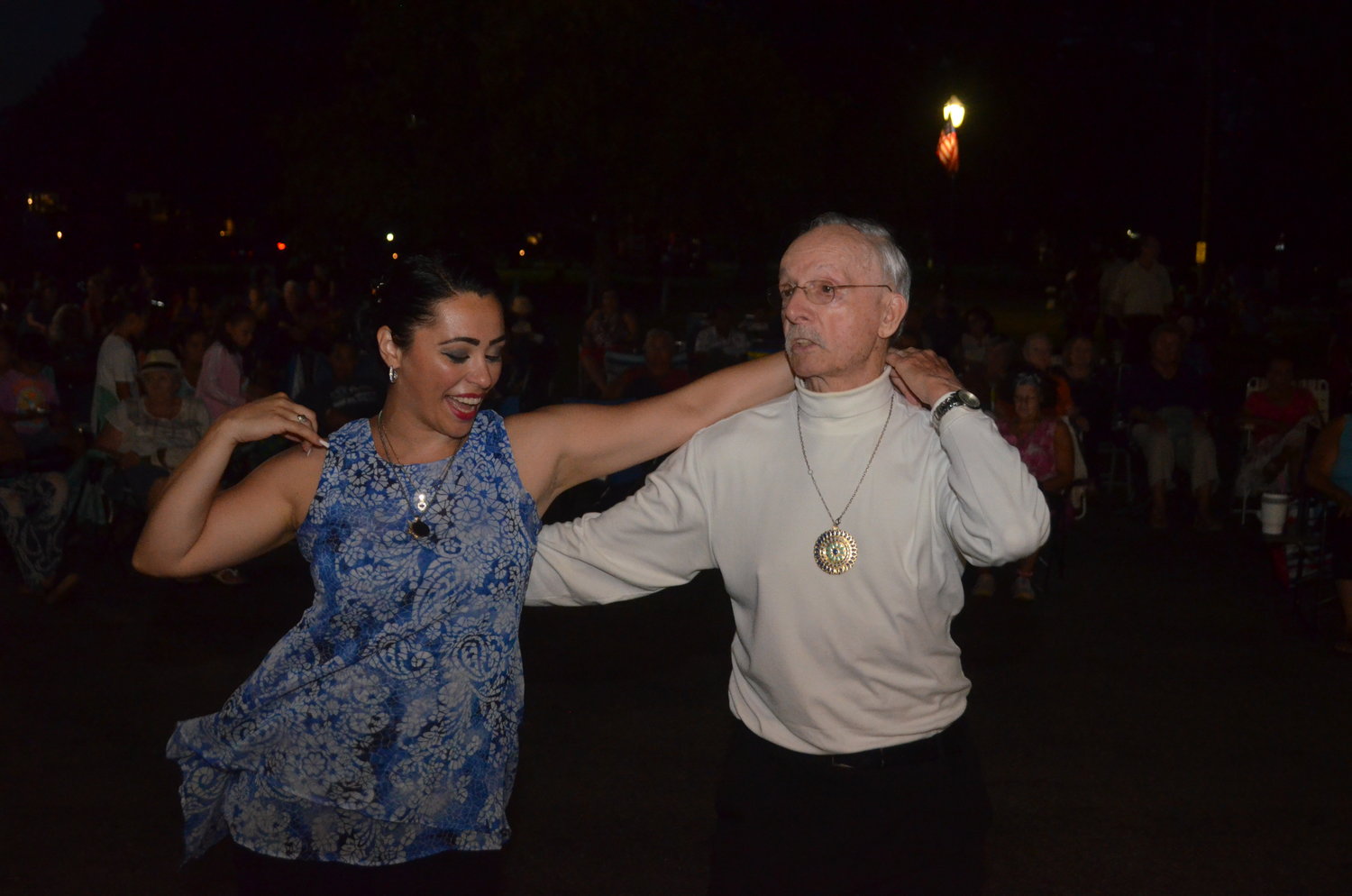 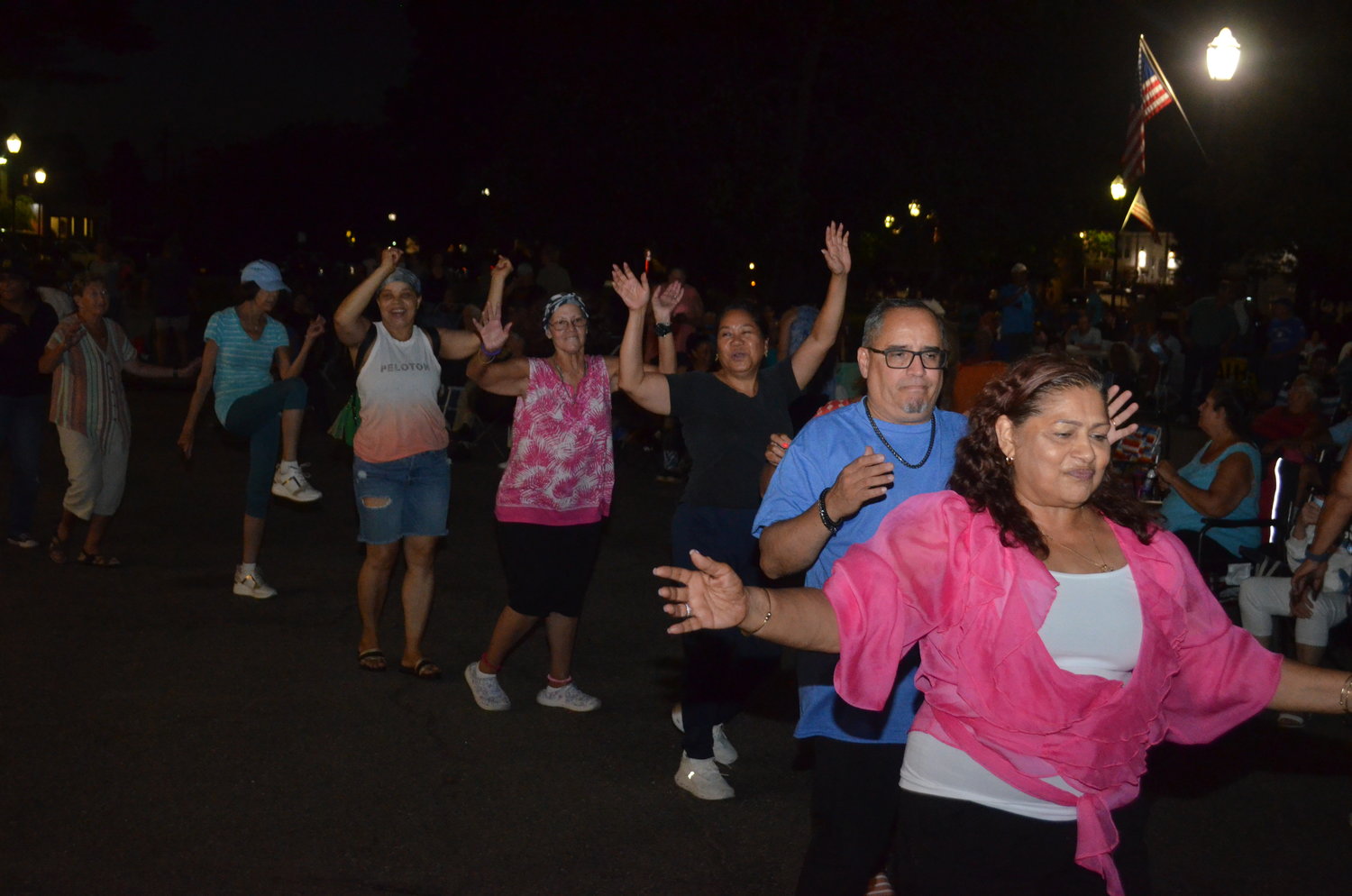 Dancers taking part in last week’s Bronx Changa left their seats and made their way onto the dance floor.
Tim Baker/Herald
Previous Next
By Intern Taylor Nicioli

On any given day, the grounds of Village Green Park serves as the usual go-to spot for joggers and dogwalkers. But last week, it transformed into a roaring dance floor as dozens gathered for a night of salsa.

At the center of it all was Bronx Changa, an eight-person Latin salsa band that took over the Village Bandshell with a wide assortment of instruments in tow. But drums and a piano weren’t all they had. Bursting onto the scene was the “Mambo Man of Valley Stream” himself, Gaetano Ferrara, rousing the crowd from its seats with a mambo-dancing show alongside two dazzling partners: Karina Hernandez and Krystal Garabedian.

The ladies took turns through an energetic series of spins and moves, providing exactly what the 87-year-old Ferrara needed since just “one partner doesn’t have the energy to keep up with me.”

Ferrara and Bronx Changa band leader Ivo Tirado Jr., shared a professional relationship for the last five years and had planned this tag-team performance together for more than a year.

The two met through the acclaimed band leader and timbales player Orlando Marin, who was christened by former U.S. Rep. Jose E. Serrano as the “Last Mambo King.”

Marin would regularly perform with his orchestra at Valley Stream, Tirado said, but the ailing 88-year-old icon was not well enough to perform this time around.

So to show their respect, Ferrara and Tirado made this performance a personal tribute.

“Orlando was a great inspiration to me as a young percussionist, and I followed his music for many years,” Tirado said. “So, when Gaetano mentioned that we would be representing Orlando Marin, I said absolutely,”

Tirado’s ardent mission in life is to “bring a little happiness to people with my music and bring our authentic New York City salsa to Long Island.”

He’s not alone in that regard. Salsa and mambo dancing is a lifelong passion of Ferrara’s, who hopes to dance well into his 90s. He savored every minute of performing for his home crowd, charming audience members out of their seats.

People like Robin Intravia, who said he was itching to hear some salsa and watch the dance.

“I’m excited for this one because I love Latin dancing,” he said. “It really raises everyone’s spirits.”

Others made the drive to the bandshell as well. Like Donna Parry of Rosedale, who says she attends every summer concert in Valley Stream.

“It is an older crowd, but they have more fun than any other crowd,” Parry said. “I’m 61 myself, and I can tell that senior crowds always have the most fun.”

Ferrara’s son, Guy, was no stranger to the Bandshell either, participating in 1978’s Battle of the Bands there.

“Music runs in the family,” Guy said. “While I like to stay on the stage, my dad can’t because he wants to dance with the ladies in the crowd. He will jump off the stage and just start dancing with them.”

Have an opinion on the Mambo Man of Valley Stream? Send an email to jlasso@liherald.com.