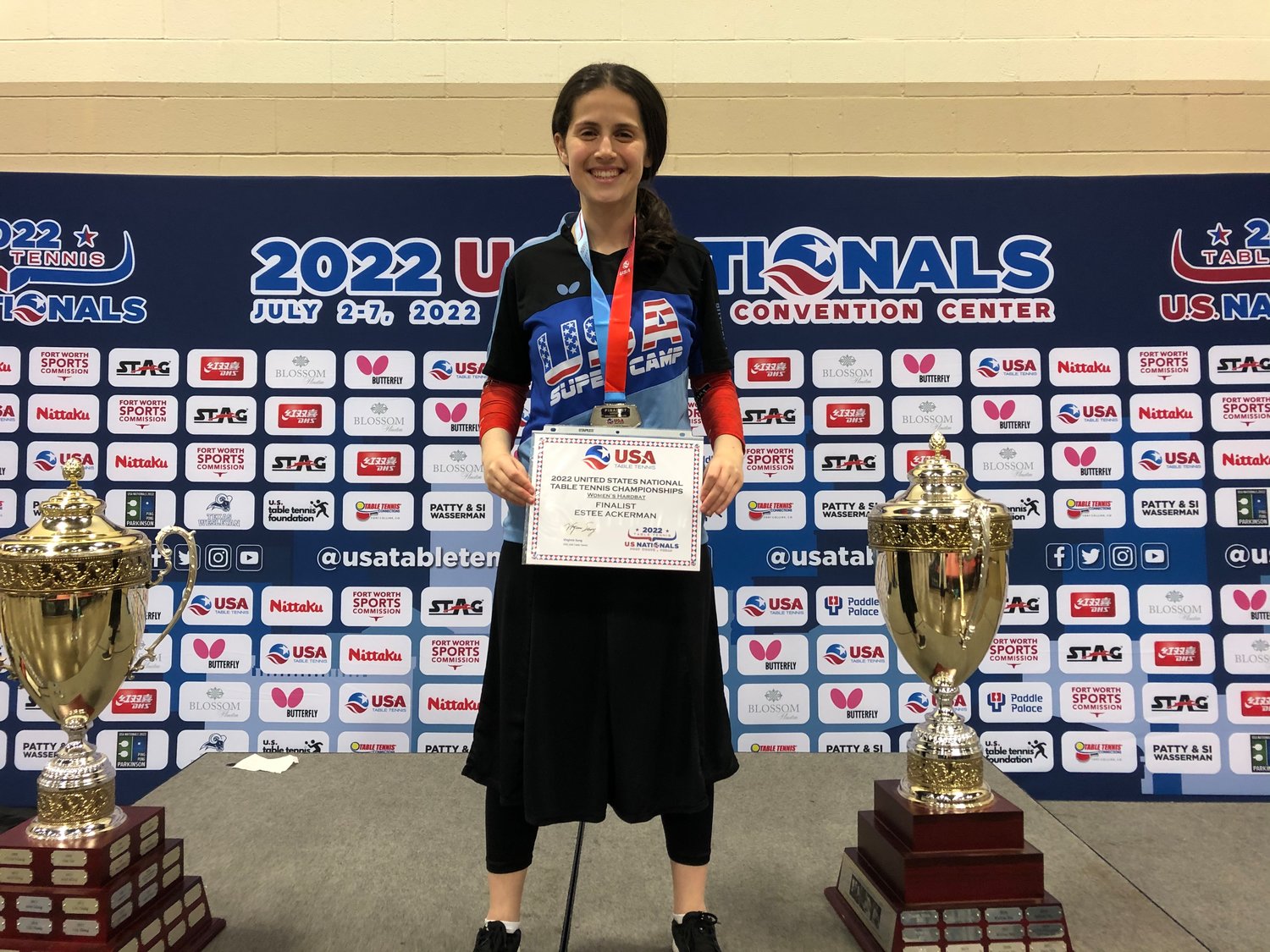 Estee Ackerman competed at the U.S. National Table Tennis Championship, where her former coach and the mother of her doubles partner reportedly called her ‘ugly’ and ‘not professional.’
Courtesy Glenn Ackerman 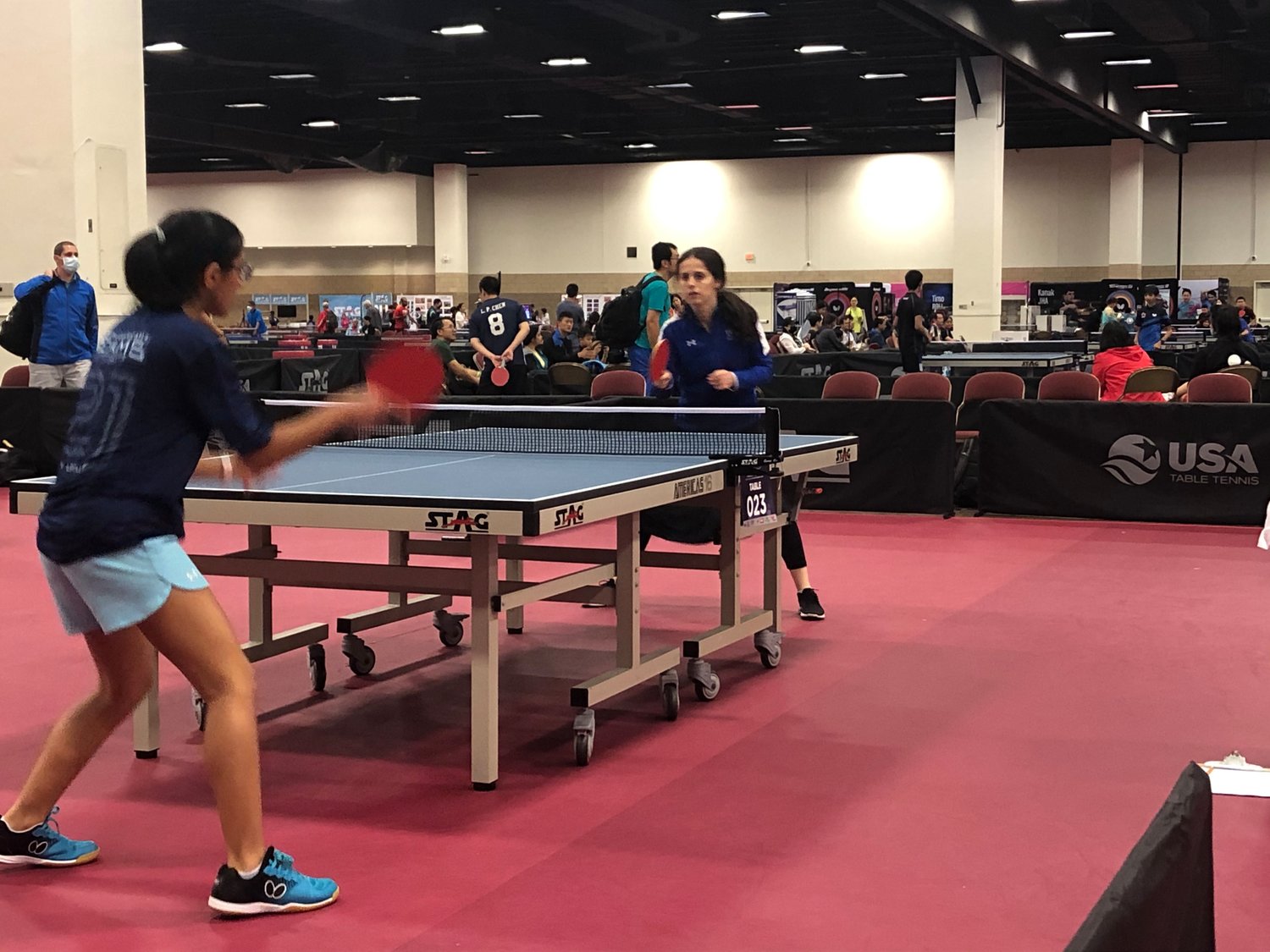 The father of an Orthodox Jewish table tennis player from West Hempstead has accused former Olympian Fei Ming Tong of harshly criticizing his daughter for her conservative style of dress at the U.S. National Table Tennis Championships in Fort Worth, Texas, in early July.

Estee Ackerman, 20, has been playing table tennis since she was seven, introduced to the sport by her father, Glenn, who has been playing for more than 40 years. During her career, she has amassed several tournament victories and gold medals from the national championships. In 2013, she even beat tennis legend Rafael Nadal in a match of table tennis.

For this year’s championships, Ackerman’s father got in touch with Tong, who represented Taiwan in table tennis in the 2000 Summer Olympics. The two parents arranged for Estee and Tong’s daughter, Lucy Chen, herself a highly accomplished player, to play together in the women’s doubles event on July 5.

“We reached out to Fei Ming and Lucy,” Glenn Ackerman recounted. “We asked, ‘Would you like to play doubles with Estee?’ And they were agreeable to this.”

The Ackermans had texted the Tongs asking for a practice session during the morning of the event. “They said, ‘Sure, come to Table 15,’ so we said, ‘Good, no problem,’” Glenn Ackerman recalled.

“I was actually practicing with someone,” he added. “Estee just finished her first match, and they weren’t exactly ready to practice with us yet, so they were just sitting there. Then the mother comes up to her, and for some reason she just went ballistic.”

“’You’re ugly. It’s disgusting. We don’t want to play with you. How can you wear that? It’s not professional,’” Ackerman recalled the mother saying, among other attacks and expletives.

An Orthodox Jew, Estee Ackerman dresses modestly, wearing a skirt as well as a shirt and leggings covering her elbows and knees. “Wearing this does not effect her movement,” her father said. “It has (no) effect on her play at all. There are players there with earrings, nose rings, tattoos. It’s inclusive, the tournament. It’s not like she’s wearing an evening gown and high heels. She’s wearing sneakers. Everything’s proper. So to me it comes across as big time discrimination.”

According to the elder Ackerman, Tong withdrew her daughter from the doubles event following the incident, forcing a default from the event for both players. Ackerman went on to win silver in the hard-bat contest at the Fort Worth championships and participated in several other events. Now studying abroad in Israel, she could not be reached for further comment.

The alleged dispute came as a shock to the Ackermans since they have worked with Tong in the past. “Fei Ming years ago used to coach Estee,” Glenn Ackerman said. “I thought she was a very good coach. She’s been to my house in West Hempstead many times.”

While Estee generally wore less conservative clothing in her youth when Tong coached her, Tong had also seen her play recently, he said. “About mid-May, Fei Ming was with us in Westchester at a tournament,” he said. “She watched Estee. She thought Estee did quite well. And she saw exactly what Estee was wearing.

“Here’s someone who we trust, who we like, who coached her, who’s very well respected in the world of table tennis. It puts someone to tears.”

In her defense, Tong disputed the Ackermans’ allegations. “Is he telling the truth? Certainly not,” she said of Glenn Ackerman’s accusations. “I don’t understand why he’s doing this. Between me and her, there is no argument. If there’s something, he should have said something then and there to USA Table Tennis and we could have dealt with it. I don’t understand why, a month later, he’s saying these things.”

Tong asserted that there is no issue between her and Estee Ackerman, “She’s a lovely girl and I wish her all the best,” Tong said. “As a parent, as a teacher and with her as a student, there is no problem between us.”

Tong’s daughter went on to place first in the women’s under 17 division at the Fort Worth event. Speaking with a representative for USA Table Tennis at the event, her daughter stated that her ultimate goal is to represent the United States in the Olympics.

Ackerman has aspirations of Olympic medals herself, having defeated Olympians in competition in the past. She had hoped to compete in the 2020 Tokyo Olympic Games, but the trials were held on Saturday during the Sabbath, and organizers declined to reschedule or make religious accommodations.