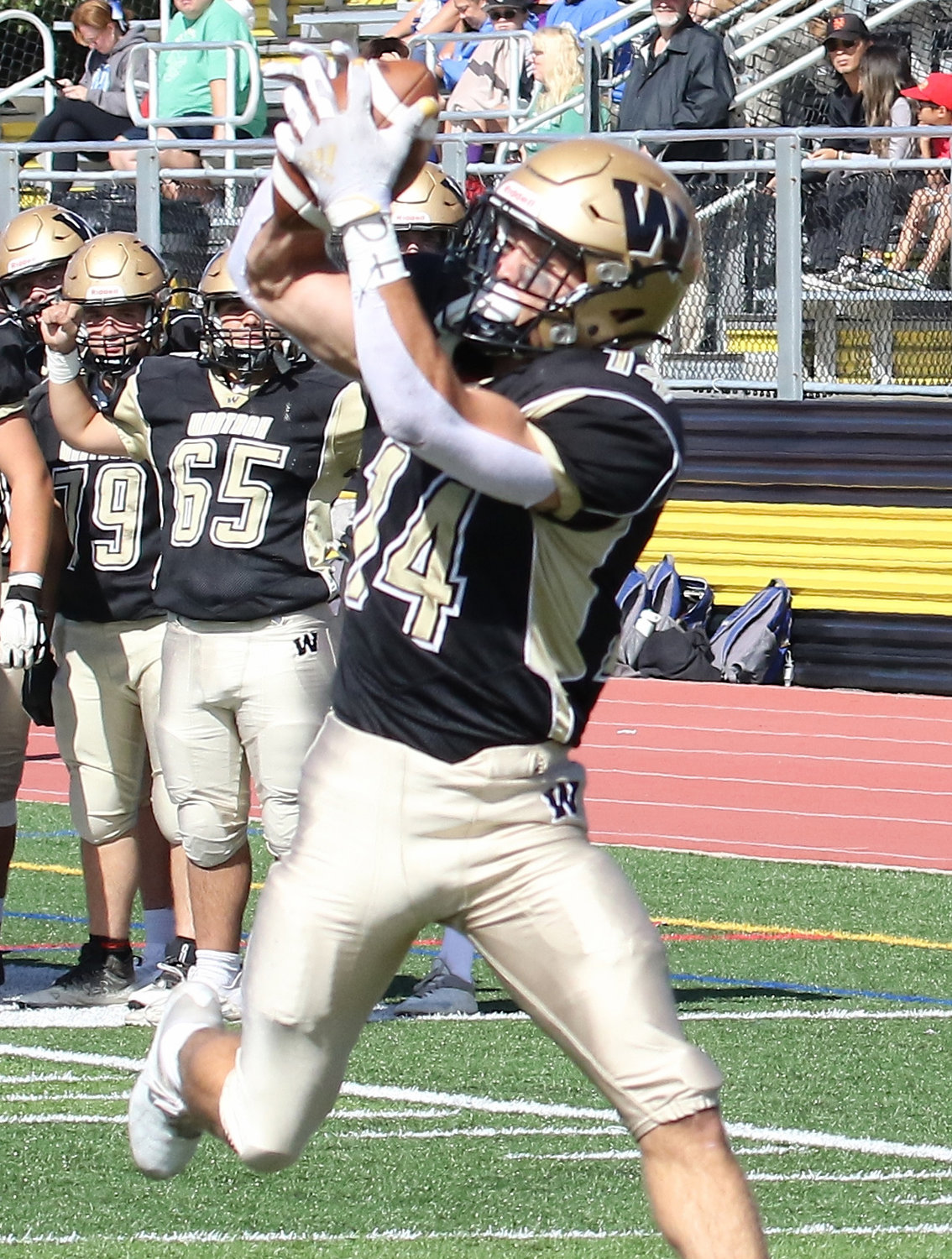 The Wantagh football team has found a winning edge early on in the 2022 season despite big adjustments for the returning players.

The Warriors improved to 3-0 with a commanding 42–0 win against Division last Saturday. Wantagh is unbeaten nearing the midway point of the season despite having virtually nobody on the line of scrimmage playing the same position from last year’s 8-2 team that fell to Bethpage in the Conference III semifinals.

“We’re getting better every week,” said 30th-year Wantagh head coach Keith Sachs, who has won 195 games leading the Warrior sidelines including four county championships. “We’re finding out who is good at each spot.”

In the Division win, senior quarterback Joe Legovich had a big day going 11-of-13 passing for 228 yards and three touchdowns along with a 49-yard rushing score on the opening drive. Senior receiver Anthony Reale finished with 142 yards while senior running back Nick Cupelli added 115 from scrimmage and a touchdown in a game Wantagh led 28-0 at halftime.

The season kicked off on a bumpy note in Wantagh’s 16-7 win against Hewlett in which the Warriors let the pre-season eighth-seeded Bulldogs hang around until a 31-yard field goal from Nico Zervos in the fourth quarter made it a two score-game. Wantagh produced a strong ground game led by 101 yards from Cupelli and 90 by junior running back Jake Martini with two touchdowns.

Sachs said the Hewlett game proved to be a big reality check for his team, which had out-scored defending Class A champion Massapequa the previous week.

“It was a good wakeup call,” said Sachs, who has led Wantagh to playoffs 25 of the last 26 seasons. “Hopefully that will be a good learning experience for us going forward.”

Wantagh, which was seeded fourth in the preseason rankings,  responded from the rusty start against Hewlett with a dominating 20-0 victory at second-seeed Bethpage on Sept. 17 in a rematch of last year’s county semifinal defeat. Cupelli led the rushing attack ith 131 yards and a touchdown while Legovich had an efficient day going 5-of-6 including a touchdown to Reale.

Sachs said Legovich has made big steps this season in leading the offense. “He’s been a key leader,” said Sachs of his starting quarterback. “He has made some key first downs.”

The defense has been strong all season giving up just one touchdown in the opening game. Sachs said linebackers AJ Bardi and Antony Tsakos along with defensive lineman Franco Valentino have been an integral part of putting pressure on opposing offenses.

Wantagh will look to stay unbeaten this Friday facing Valley Stream North for a 6:30 p.m. kickoff before traveling to Carey on Oct. 7 at 7 p.m. The Warriors will host Floral Park in the school’s annual homecoming game on Oct. 14 at 2 p.m. and remain at home the following week versus defending Long Island Class III champion Plainege on Oct. 22, also at 2 p.m. The regular season concludes Oct. 29 at Glen Cove.