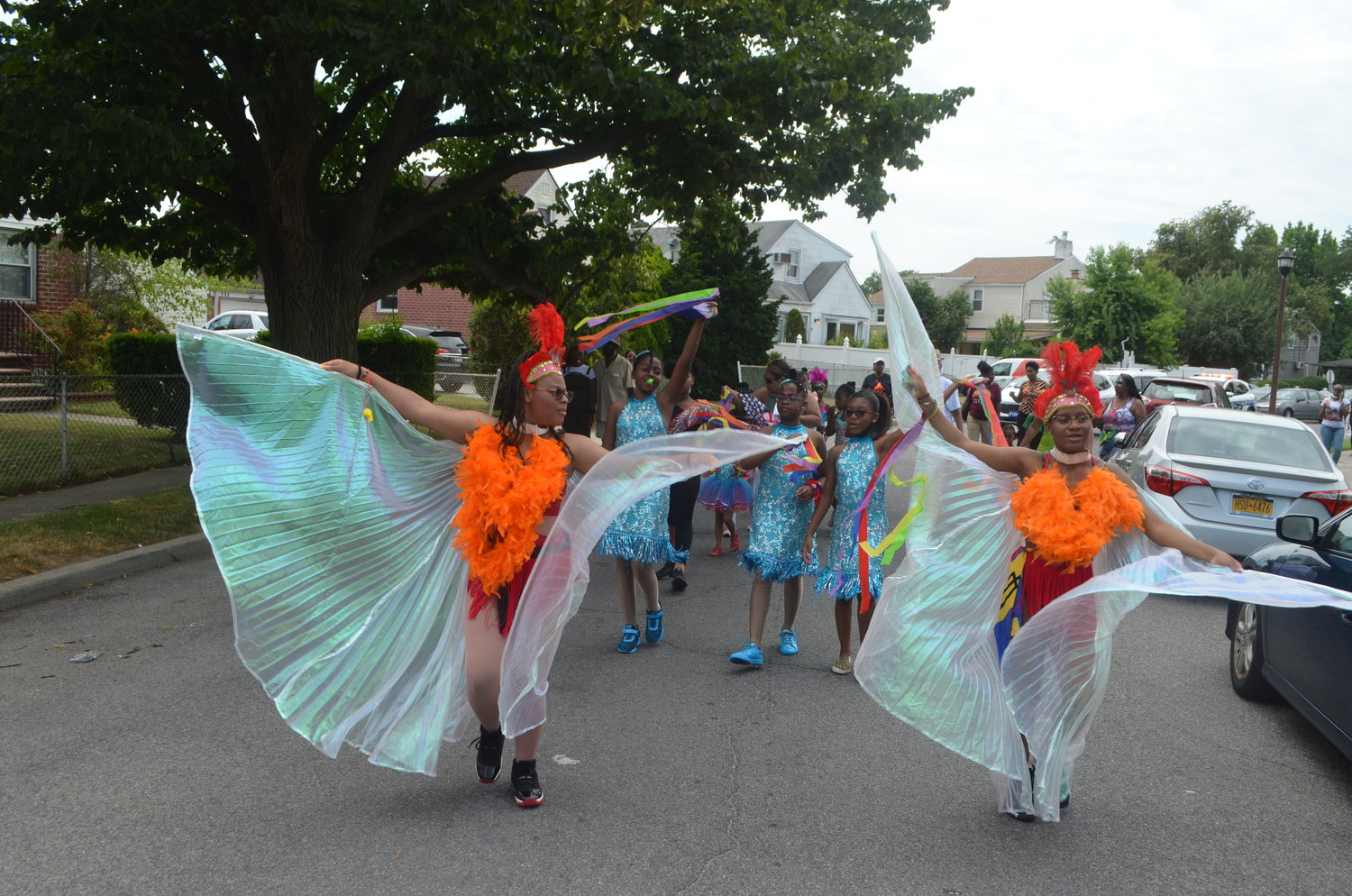 Children ages four to 17 who attend the dance school participated in the parade and festival while wearing costumes from their annual dance recital.
Tim Baker/Herald 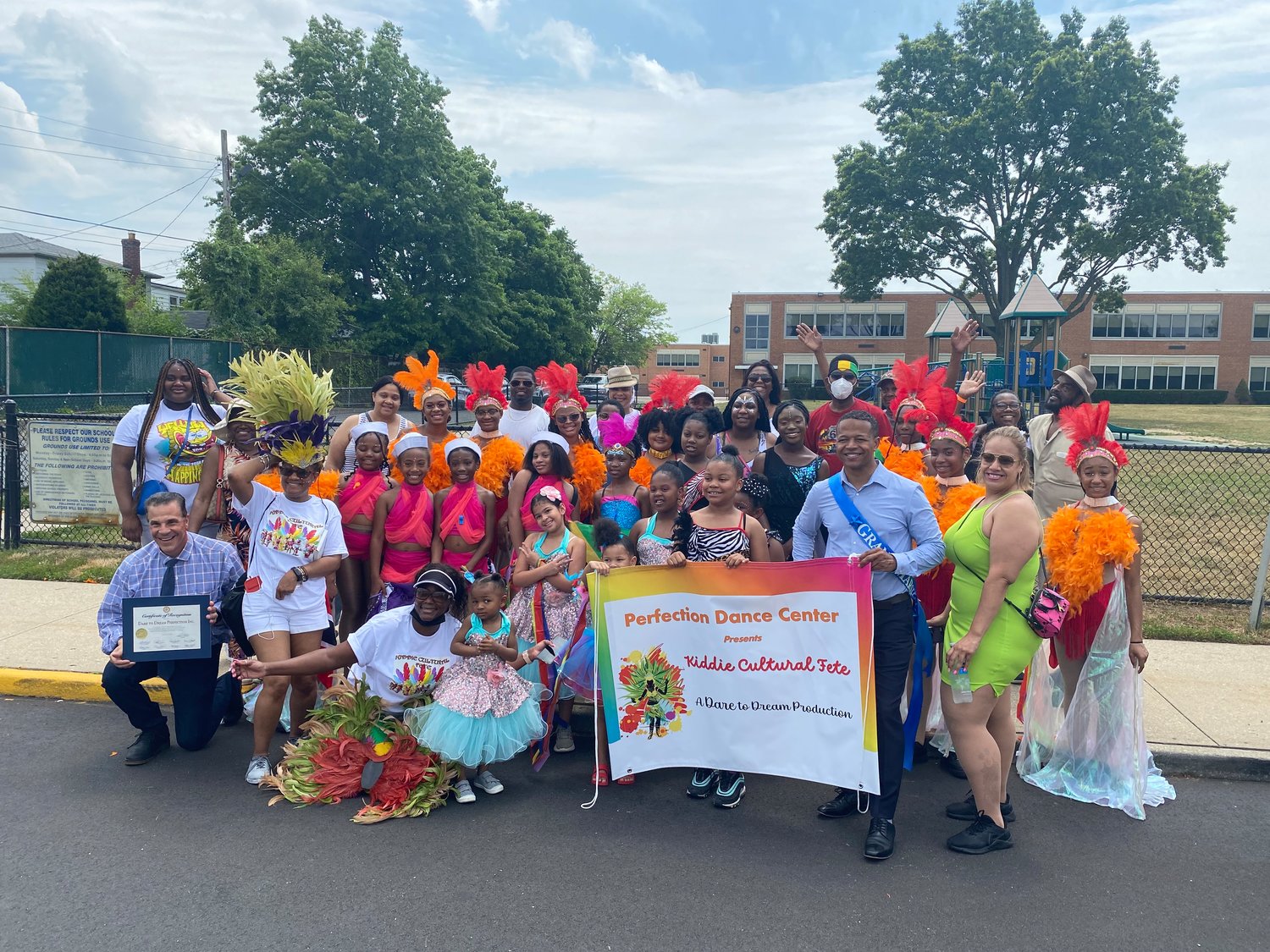 Dance school leader Petra Brathwaite, Nassau County Legislator Carrie Solages, students at the dance school and their parents before the parade that kicked off the festival began.
Robert Traverso/Herald
Previous Next

Dance has a way of putting you in a space to go into yourself and your thoughts and it’s a space to evolve from”
Sandra Edwards, parent of former PDC student
By Robert Traverso

The Elmont dance school Perfection Dance Center held its first ever parade and festival on Saturday, July 2 to promote community unity and showcase the school along with its scholarship program that supports the higher education and further education in the arts of graduating local high school students.

Dance school students, parents and supporters marched in a parade that stretched from Dutch Broadway School to Village Avenue before the students, children between ages four to 17 dressed in dance recital costumes, danced to live music, played games and participated in contests.

To Petra Brathwaite, the founder of the dance center, ensuring that local children pursue higher education is of paramount importance.

“If I can get them further in their education based on that, I am so happy about that,” Brathwaite said, explaining that the foundational goal of the dance studio is to reach students who are less able to be reached through traditional academic methods through movement, dance and music instead in order to provide them with opportunities for higher education.

The scholarships are provided to high school graduates and Perfection Dance Center graduates students pursuing further education in the arts, whether in dance, theater, music or any of the arts.

Along with educational growth, dance studio leaders and supporters see dance as a gateway for personal development for local children.

“Dance has a way of putting you in a space to go into yourself and your thoughts and it’s a space to evolve from,” said Sandra Edwards, a volunteer who attended the festival to support the dance center whose daughter attended the center for over 15 years, beginning at age three, until she graduated school and went to college.

“I think the arts is one of the most underacknowledged curriculums,” Edwards said, adding that she believes the arts is a productive way for children with disabilities and people with mental health issues to overcome obstacles they face.

The initial goal of the event, Brathwaite said, was to provide dance students with a secondary purpose for their costumes that were designed for the dance studio’s annual recital. Later, the event hosted by the dance school, which opened 32 years ago and has been open in Elmont for 26 years, evolved into a festival that promoted community unity.

“This shows community awareness,” said, explaining that the music and dancing at the event showcased the Caribbean backgrounds of many Elmont residents and added that the festival promoted fellowship between community members following the lack of engagement amid the height of the pandemic.

“Art is supposed to uplift you,” said Nassau County Legislator Carrie Solages at the event, where he served as the master of ceremonies and cut a ceremonial ribbon kicking off the parade, seconding the dance center’s assessment of the arts as a tool for personal and educational development.

“When you believe in yourself and you have courage and conviction, nothing can stop you,” Solages said, encouraging students to pursue higher education as well as the arts.