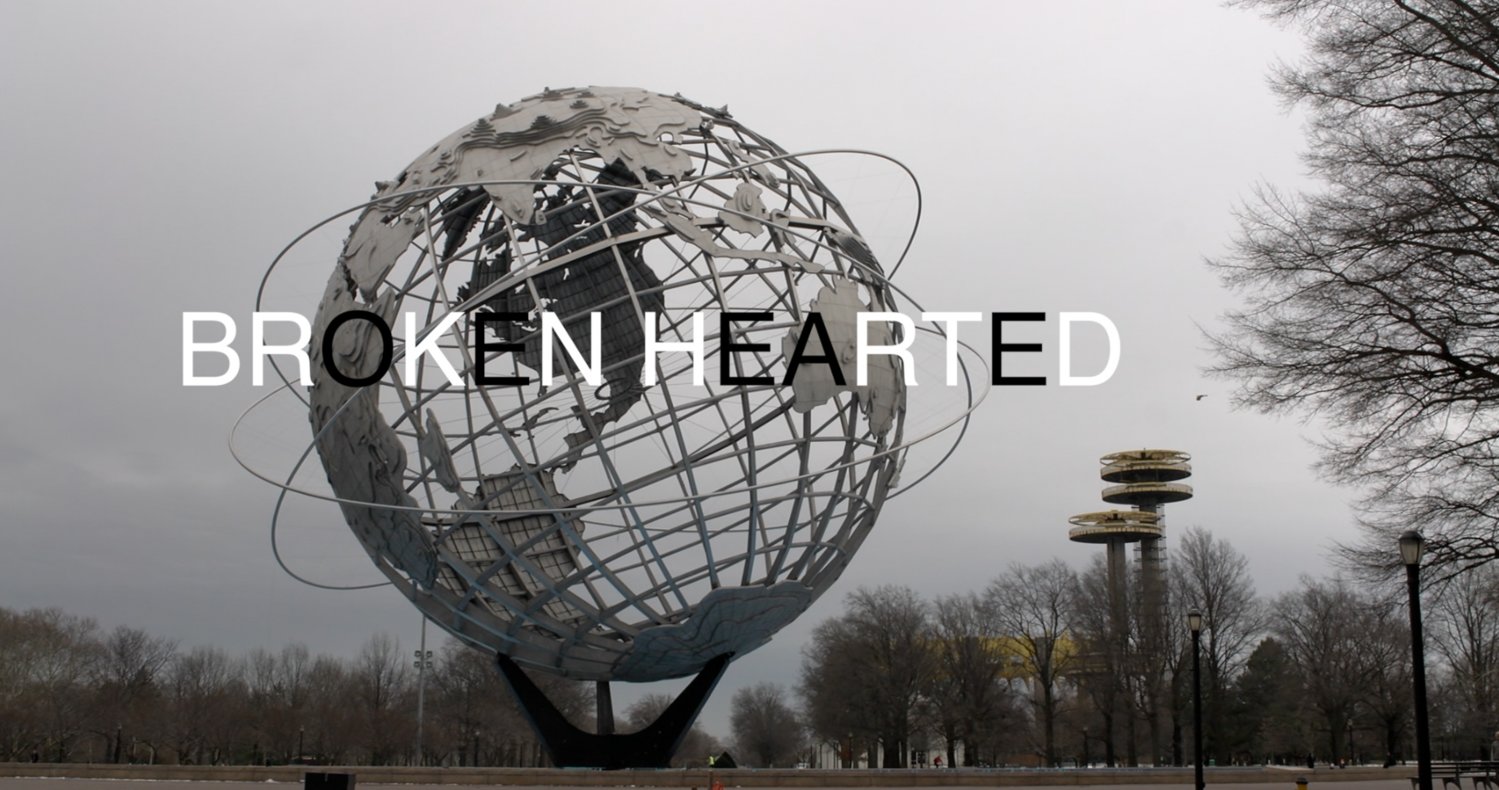 The title shot from Broken Hearted is at the Unisphere.
Courtesy Joseph Ammendolea
By Brian Pfail

A feature flick written, produced, and directed by a former Franklin Square resident just landed on Amazon Prime’s video-on-demand streaming service. The film was also shot in Franklin Square, making it unique to the community.

Joseph Ammendolea, the man behind the film, has been in the movie-making business for nearly 10 years now.

“I kind of had a good technical mind in high school for it, though it wasn’t at the level of other filmmakers,” said Ammendolea. “Writing comes from doing it just from practice.”

He said much of his skills were acquired through repetitive practice and learning from his mistakes.

“I think the first script I wrote was when I was 18. It wasn’t very good,” said Ammendolea. “It never made it, but it just kind of gets you to think that way, like how to make characters and form a story.”

He wrote and wrote until, eventually, he created a product that was “watchable.” Ammendolea said from there, the process just became easier. He utilizes music to help him get ideas because it makes his mind think.

“If I’m writing, usually I’m playing songs in the background on random,” said Ammendolea. “I just have these 7000 songs on my iPod that I play at random. So there’s certainly a lot of options for inspiration.”

Ammendolea started out in Hollywood when he worked for the Late Show with David Letterman in 2004. He was still in school and needed a part-time job. That experience showed him how difficult it would be to get into the industry, so he decided to make it secondary to his work as a health plan manager. It would take him 10 years to ultimately make his first feature film, Dumped.

It was released in 2015 and was about a group of young men who pull pranks on one of their exes. The idea came from his experience in high school. It was more of a “buddy comedy,” than anything else. Ammendolea views it as his “rookie” work.

The other Franklin Square film, Broken Hearted, was released in 2019. He says it’s more of a drama, which he prefers. At the time of filming both movies, he was living in Franklin Square and would use his house for a lot of the shots.

“Broken Hearted opens with a shot of the New York City skyline,” said Ammendolea. “The camera eventually spins around, and you’re looking at Queens and Long Island.”

He said he would make a character out of the location, which was a lesson he learned from Dumped – strong character development.

He said, “the way I describe Broken Hearted [is] its kind of like the Notebook, but told through the James Marsden character point of view – the guy that she had to choose from instead of the Ryan Gosling character.”

“Why wouldn’t she choose him if she had to choose between the two of them? I tried to delve into that a bit.”

Ammendolea acknowledges friendship, loyalty, and romance as recurring themes in his works. More specifically, he believes the films aim to express finding your true soulmate rather than the person who happens to be right in front of you or making relationships with people that are more deserving of it.

He plans to dive into other themes like forgiveness, communication, and society’s overreactions to the modern age in his future work.

“I think any kind of film, the best films, are ones that have all the elements of tension and drama and then a little bit of comedy to lighten the mood when appropriate,” Ammendolea said. “I try to mix it all if I can – that would be ideal.”

He is currently trying to further his brand by getting Broken Hearted on iTunes but needs another two feature films for Apple to approve. He is also looking into Netflix and HBO Max, but as it stands, it’s ongoing. It took him two years alone to get on Amazon Prime. They posted Broken Hearted on August 15 of this year.